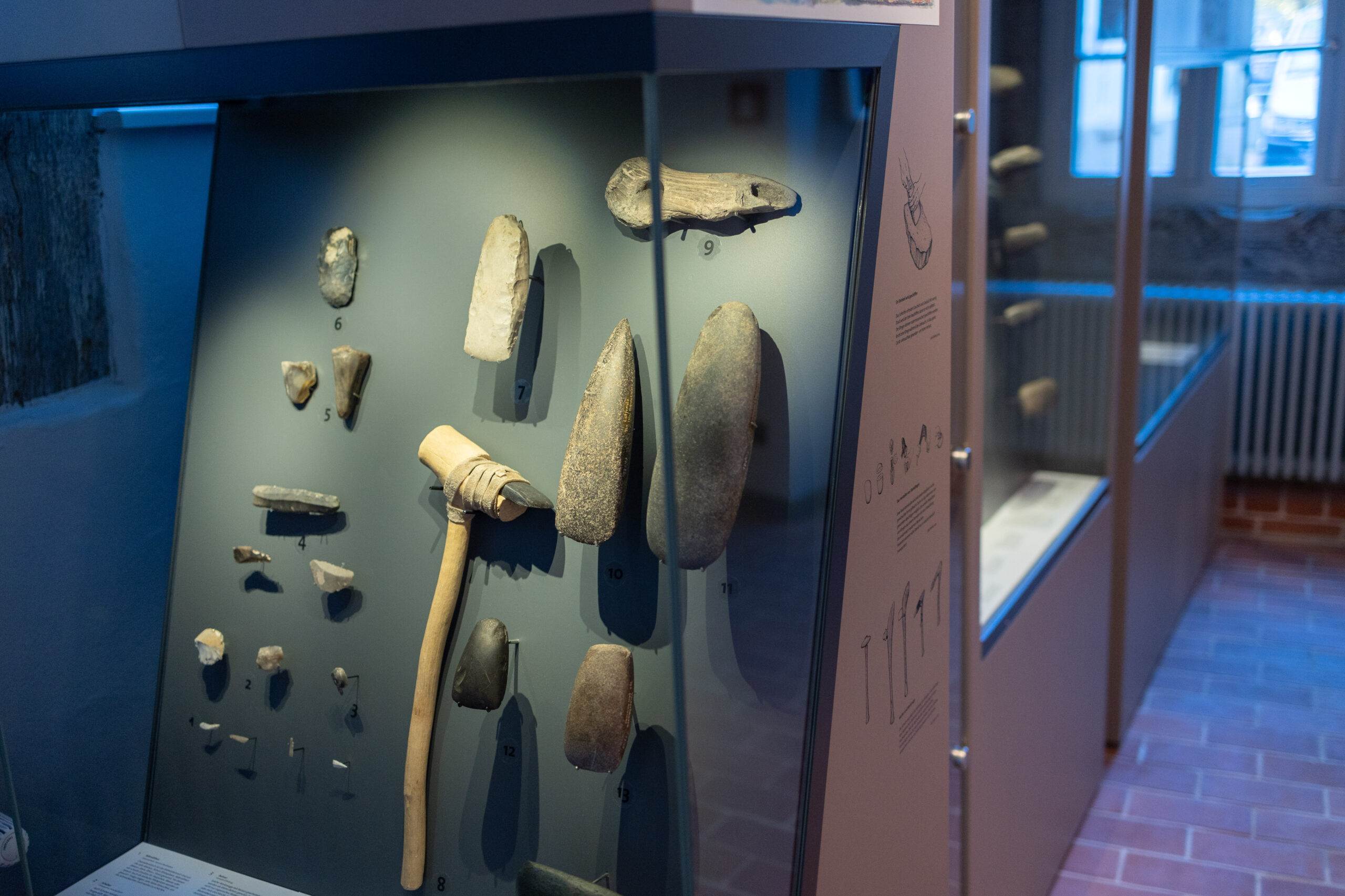 These very small, fine flint tips, called microliths (micro = small, lithos = stone), are characteristic of the Mesolithic. They serve as sharp inserts for harpoons, knives or spears. They are also used as simple arrowheads. Some show very fine retouching to further sharpen the cutting edges.

Scrapers were also made in the Paleolithic. They are used to process organic material such as wood, meat or animal hides.

Tools with carved-out points are used as small drills. They used to perforate organic material such as fur, animal skin or wood. With a lot of sensitivity and knowledge of the material, even smaller stones can be drilled through for example to attach handles.

Knives have been in use since the Paleolithic. They are struck as simple blades from a core stone. The long sides of the two cutting edges are sharpened by tapping them with a softer stone, antler or bone. This creates a serrated cutting surface that can be re-sharpened if necessary.

Flint core stones provide the basic material for tools in the Stone Age. The tendency towards ever smaller tools in the Mesolithic period requires precise cutting and retouching techniques. Waves on the surfaces are a result of the manufacturing process and can often be seen on the core stones and the tools themselves. These are caused by the sudden pressure on the rock when it gets hit.

In the Mesolithic period, new types of devices were created. This includes core axes. Using targeted strikes, they are carved out of a large flint core stone. To obtain the shape, larger pieces are chipped off first. The final shape is created through ever so slightly finer strokes. Core axes are the predecessors of the later polished axes from the Neolithic period.

Flint axes dating to the Neolithic period can be found especially in northern Europe. They are often associated with the so-called funnel beaker culture. Their distribution area extends from Scandinavia to the North German Plain.

Adzes are a typical tool of the Neolithic period. They are used in woodwork. This type of axe is flat at the bottom and has a curved top. The axe is attached transversely to the handle.

Axes made from antlers are among the new types of equipment developed during the Mesolithic period. They also occur in the Neolithic and occasionally in the Bronze Age. Antler is a very hard and resistant material. It is uncertain for what activities there antler axes were used for. They are suitable as tools for wood processing and as weapons.

The characteristic polished surface of Neolithic axes is the result of a very lengthy procedure: the axe is rubbed over a long period of time on a flat stone with sand and water under varying degrees of pressure until the desired polish is achieved. Not all types of rock can be polished.

While tools became smaller and smaller in the Mesolithic, the axe size in the Neolithic increases again. At 1.2 kg, this axe is also very heavy. The edge shows signs of wear, this axe has been used as a tool, most likely for wood processing.

This rather small axe or adze is used like its larger relatives for processing wood, as a slicer or for making holes and grooves.

Round axes are among the earliest axes and have been in use since the Mesolithic. This axe can be assigned to the Neolithic Age. The polished surface is characteristic of axes from this period. The axe shows clear signs of wear on the edge.