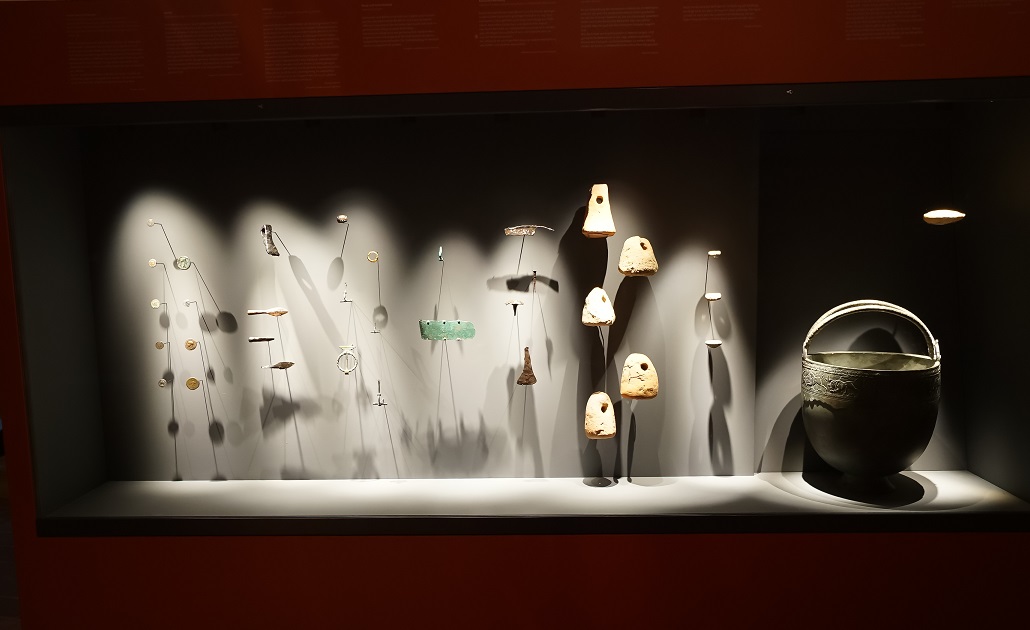 Romans and the Germanic Tribes

From the birth of Christ till 375 AD, Germanic tribes can be found all over the present day Niedersachsen. The areas around present-day Hameln are part of the Cherusci territory. There’s lots of contact between Romans and Germanic tribes. They alternate between trading and fighting. The Cheruscan named Arminius leads a German tribal revolt against the Romans in 9 AD. The Battle of Varus, as it is called, completely defeated the Romans. Contrary to what has been assumed until now, this is not the last battle to be fought between the Romans and Germanic tribes in Niedersachsen. From 122 BC, fixed ramparts protect the Roman Limes, but many bloody skirmishes still take place. Despite this, trade continues.

The discovery of a Roman settlement at Tündern shows that Germanic tribes were living there between 100 and 300 AD. They admired the Roman culture. A crossbow brooch that was found shows the same design as the Roman soldiers’ brooches.

During the Roman Empire, the Germanic peoples lived in buildings which resembled this reconstruction. They were enclosed with fences, and the storehouses stood on poles.
Within the farmlands, there were small and medium-sized single farms. In the course of the 2nd and 3rd centuries, village-like settlements developed.  Trade and handicraft gained in significance. There were thus increasingly pit houses where people worked, and workplaces for iron smelting. The population grew. Between 250 and 500 people lived in a district.

The survival of the farmers was always under threat. If the weather was unsuitable for tilling the earth or for the harvest, or if seeds were lacking or did not grow, there was famine. When the harvest was brought in, it had to be stored so that it did not spoil. If the harvest yield was small, each grain and piece of dried fruit was vital.

The Romans and the Germanic tribes were opponents. They fought each other in many battles. Nevertheless, they were also neighbours and bought or exchanged goods: the Roman legions received fresh food from Germanic traders. Slaves, amber and fur were sought-after Germanic trading goods in the Roman Empire. Roman coins, jewellery and high-value consumer goods were very popular in free Germania.

Bronze and copper coins were the small change with which the Roman legionnaires were equipped. The metal value of the coins was the primary importance to the Germanic peoples. They were seldom used as a means of payment.

A Roman legion was an independently operating, large military formation, usually consisting of 3000 to 6000 heavy infantry soldiers and a small unit of legion cavalry. Its military success was based on superior equipment, intensive training, discipline in battle and also tactical flexibility. Also important were the infrastructure – such as roads – and the structures of state on which it could depend.

The legions were an essential factor in the expansion of the Roman Empire. They usually operated together with non-Roman auxiliary troops. These consisted of infantrymen, horsemen, archers and catapult-throwers in approximately equal numbers.

Cloak pins for the closing of clothing were named brooches. They function like modern safety pins. Even if the function remained unchanged, the shape altered according to the respective fashion of the times.   Archaeologists can therefore date a brooch when they find one. Depending on the decoration and features, the wearer could also be assigned to a definite cultural circle or social class.

Glass beads were not domestically produced, but imported from the Late Roman or Franco-Alemanic regions. Usually a number of beads were worn as a chain. The colourfulness was striking. This made the beads especially valuable. This applied especially to the glass finger-ring. It was just as breakable as valuable. The wearer of the jewellery clearly belonged to a wealthy family.

Roman fashion was adopted and converted by Germanic craftspeople. The brooch was recreated like a Roman soldier’s brooch. The belt fitting has likewise been reworked in style.

During the Roman Empire, manufactured goods reached free Germania due to contact between the Roman and Germanic peoples. Among them were also these tools made of steel, an especially elastic and durable metal. The small axe would have been used for wood processing. The nails are unusually short and so perhaps were a type of rivet.

Scissors were an important tool for exact work with textiles and other materials.

The primitive-looking construction known since the Stone Age was used until the development of the horizontal loom in the Middle Ages. The textiles woven by the Germanic peoples during the Roman Empire were nevertheless of such high quality that they were desired by the Roman soldiers. As ceremonial overcoat finds in moorland demonstrate, Germanic weavers could themselves weave complicated patterns such as herringbone and diamond twill. Frequently, the edges were intricately crafted in weaving tablet technology.

The fabric required for the production of clothing was still predominantly made in private homes.  The hand spindle was now also the most practical tool for manufacturing thread that could then be woven.

Metal buckets were made in provincial Roman workshops. This bucket found its way to the Germanic region as a bargaining object, present or booty. It may be assumed that the bucket was an object of prestige for its owner.  The container was finally used as a funeral urn. In the region of free Germania, such buckets have only been found in graves.

In the provincial Roman area, they have been discovered as hoard, water or settlement finds. They were used as storage containers or for mixing wine with spices.

An oil lamp gives out comparatively bright light. It has been worked in fine clay and furnished with a relief. Presumably it was imported.