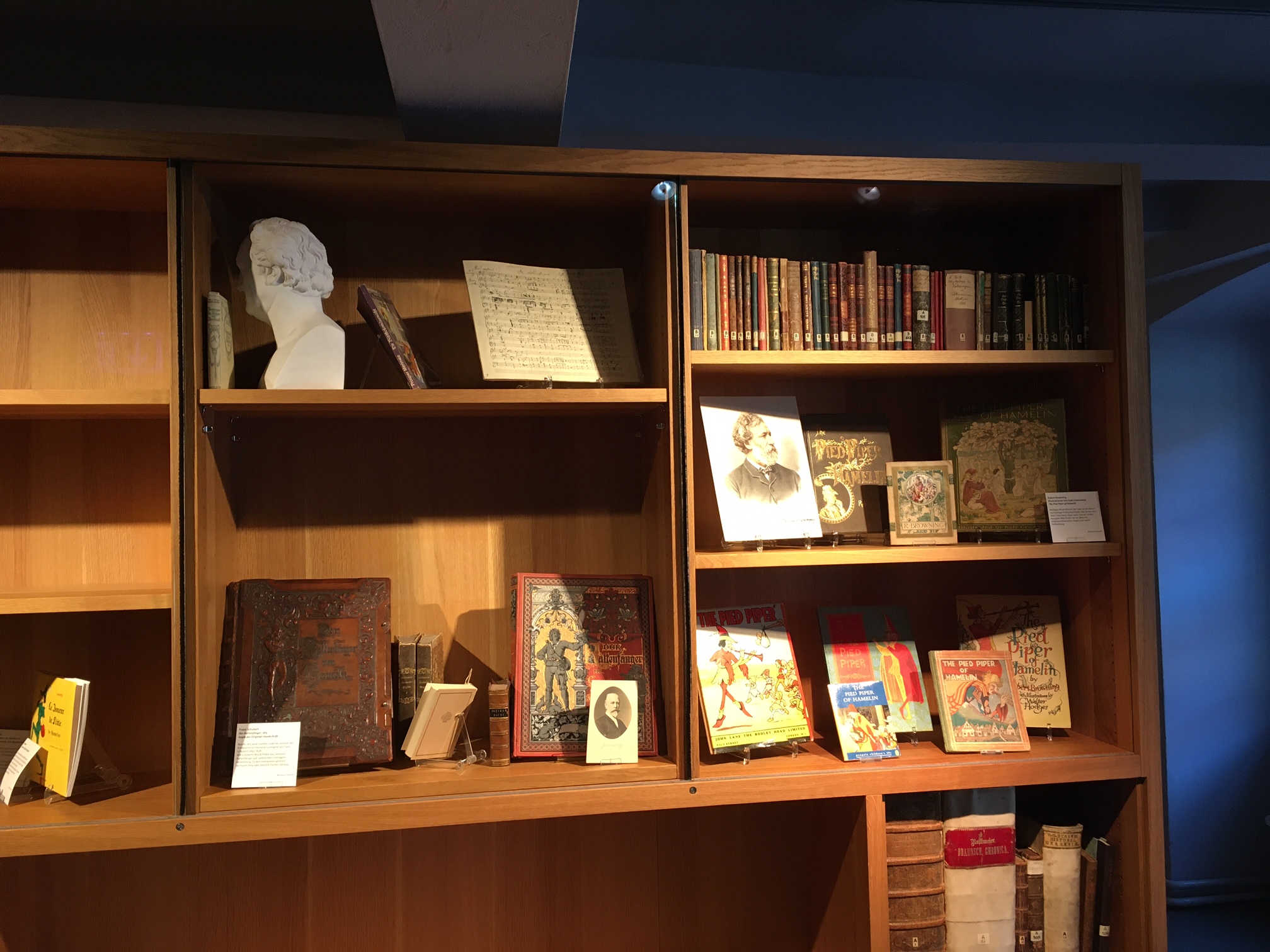 National and international literature about the Pied Piper, © Museum Hameln

The Pied Piper in Literatur

Jacob (1785-1863) and Wilhelm (1786-1859) Grimm are known as linguists and collectors of fairy tales. The brothers were born in Hanau and studied law at Marburg. After their studies, in 1806 they began to gather fairy tales and legends from spoken traditions. This initially formed the basis of the collection of children’s and household tales published in 1812.

Four years later, the first volume of “German Legends” appeared, which also included the fable “The Children of Hamelin”.

The brothers did not only deal with the actual history. They devoted more than a third of their text to historical tradition. Among other things, they cited the inscription on the new gate stone, which is here in the museum.

The story of the Pied Piper of Hamelin is today closely associated with the Brothers Grimm, above all in the German-speaking area, and is also frequently to be found in collections of fairy tales.

However, the “German Legends” met with little initial success during their lifetimes. Not until the second half of the 19th century was the significance of their work recognised. The first new edition only appeared after the death of the brothers in 1865.

The German poet and author Julius Wolff (1834-1910) was born as the son of a cloth manufacturer in Quedlinburg. After his studies, he returned to his hometown and took over his father’s cloth factory, which he had to sell in 1869. He took part in the Franco-Prussian War in 1870-1 and then moved to Berlin. Wolff now worked as an independent author.

Around 1875, he wrote his epic poem “The Pied Piper”, with Hunold Singulf as the Piper and his partner Gertrud as the main characters. The legend was composed as a German epic and was the definitive perception of the Pied Piper in the late 19th century. His work is the longest Pied Piper poem of all time and it comprises 18 chapters.

How closely Wolff had his finger on the pulse of the times with his Pied Piper poem, classified as a saga, was demonstrated by the immense number of new editions, including superb ornamental editions.

In 1884 Wolff participated in the Pied Piper jubilee festival in Hamelin and was made an honorary citizen of the city.

Though today almost forgotten, Wolff is not to be underestimated in his significance for his rediscovery of Pied Piper material in the second half of the 19th century.

Carl Zuckmayer (1896-1977) is known for his dramas. His last stage play was “The Pied Piper”.  The story was first performed at the Zurich Playhouse in 1975 and is among the less well-known works of the author.  The plot takes place in the present and portrays social conflicts in a city and the search by two youths for independence and freedom, led by the Pied Piper.

The Nobel Prize for Literature winner, Günter Grass (1925-2015), published his novel “The Rat” in 1986.  In 1997, a film adaptation appeared, directed by Martin Buchhorn, with Matthias Habich in the leading role. The book and film deal with the demise of humanity and the rats’ rule over the world, narrated by an anonymous first person in dialogue with a female rat. One part of the work is concernedwith the “true story” of the Pied Piper and describes the strange love affair of a Hamelin woman with a rat.

In addition to his well-known novels, Michael Ende (1929-1995) wrote theatre plays and opera libretti, among others a play based on the Pied Piper of Hamelin legend.  “The Pied Piper, a Hamelin Dance of Death” appeared in 1993. In the same year, an accompanying 80-page book was also published.

Krysar / dt.: The Ballad of the Pied Piper

A rather idiosyncratic, grim narrative tradition of the Pied Piper legend can be retraced to the Czech Republic. It originated from the novel “Krysar” (“The Pied Piper”) by Victor Dyk (1877-1931), published in 1915. A number of films and musicals, among other things, were made subsequently.

It was the great poet Goethe (1749-1832) who arguably first recognised the literary potential of the Pied Piper legend.

While until around 1800, the debate primarily revolved around the question of how much historical truth there was in the children’s procession and its significance, Goethe took the legend as the starting point for free interpretation.

He thereby marked the beginning of the perennial literary and artistic interest in the Pied Piper, which has lasted right up to our times.

The three-stanza song form chosen by Goethe tied in with the significance of music in the legend – a setting of the poem to music was not long in coming.

Goethe first published his Pied Piper poem, a collaboration with Christoph Martin Wieland, in paperback in 1804. From his letters it is evident, however, that the Pied Piper theme had already previously occupied his attention.

Goethe also referred to the wondrous Piper in Faust: Mephistopheles, singing to a zither, is scolded as a “confounded Pied Piper”.  The constantly reappearing motif of the Pied Piper as a dangerous tempter thus achieved its place in world literature.

The telling of the Pied Piper of Hamelin garnered worldwide fame through the British poet Robert Browning (1812-1889).

Browning grew up the son of wealthy parents. The comprehensive library in the parental house influenced him greatly. He mastered several languages, attended the University of London and was keen on English romanticism.

Not until 1869 did Browning achieve his breakthrough as an author and from then on he could earn a livelihood from his work. He died twenty years later and is buried in the poets’ corner of Westminster Abbey.

How Browning learned of the history of the Pied Piper is not known. A first publication of the legend in English in 1605 has nevertheless been proven.

Browning’s poem, originally written to entertain a sick child, became incredibly popular, especially in the Anglo-American world. Among other things, it became a popular reading text in schools.

In terms of the worldwide dispersion of the legend, Browning’s version of the Pied Piper has presumably been more significant than that of the Brothers Grimm.

Copy of the original manuscript

Schubert’s piece, the “Pied Piper’s Song”, has been played on many record players.  The performers include Hermann Prey and Dietrich Fischer-Dieskau.

Few illustrations of the legend have met with such enduring success as those of Kate Greenaway (1846-1901). They were distributed especially widely in the Anglo-American world following the first edition in 1889.

In France, the legend made a literary appearance in 1829 as a short tale in the historical novel Chronique du règne de Charles IX. Prosper Merimée (1803-1870) is best-known as the author of the short novel Carmen, on which the famous opera by Georges Bizet is based.

Among the most popular interpretations of the legend in France is the 1942 book by the author and illustrator Samivel (alias Paul Gayet-Tancrède, 1907-1992).  It has been published in many new editions up to the present time and was used as the basis for an animated film.