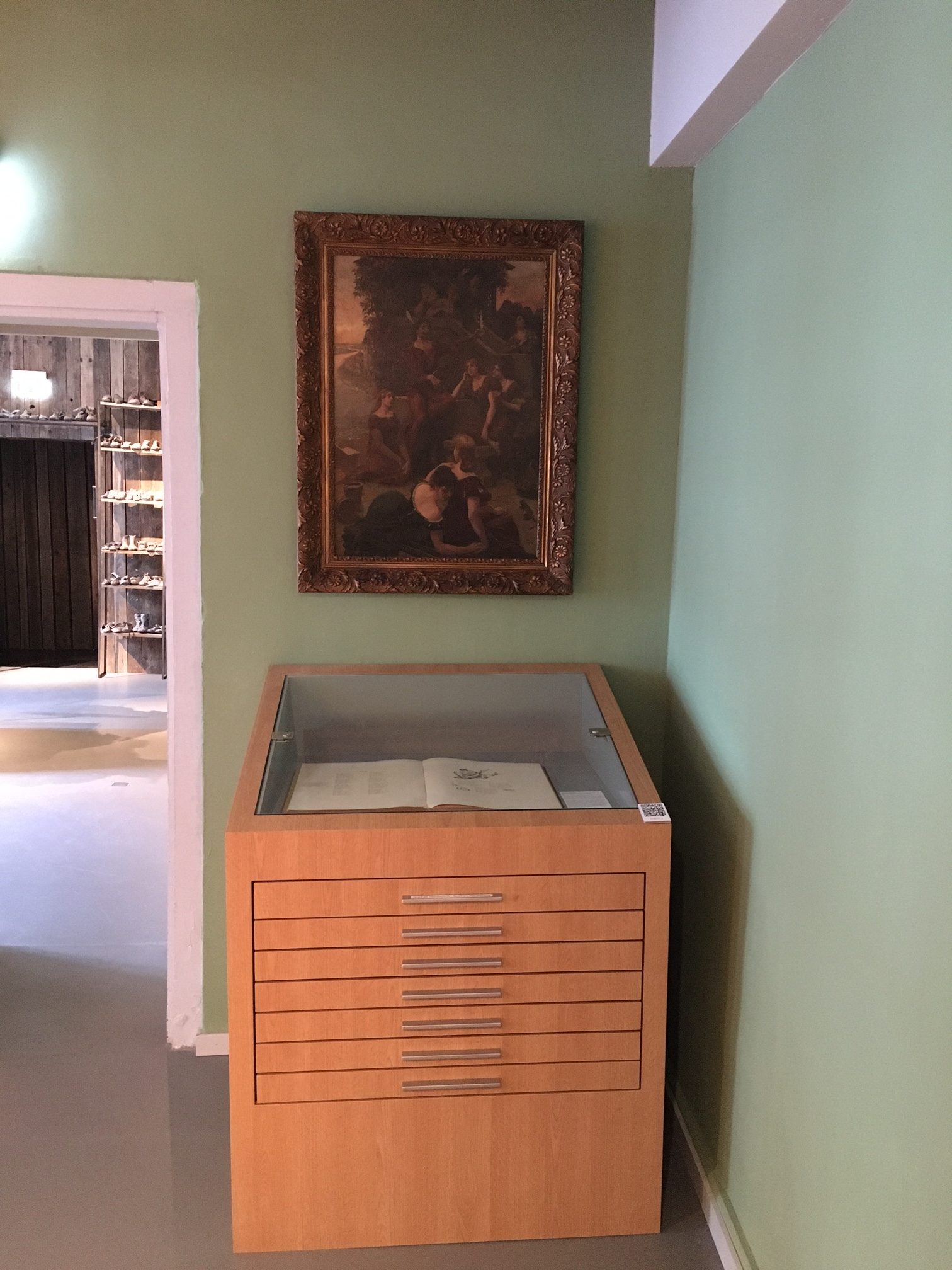 Goethe´s poem and other pieces of literature and art, © Museum Hameln

The Pied Piper in Literatur and Arts (room 1)

In the mid 14th Century, a monk from Minden, Heinrich von Herford, puts together a collection of holy legends called the “Catena Aurea”.  It speaks of a “miracle” that took place in 1284 in Hameln.  A youth appeared and played on a strange silver flute.  Every child that heard the flute, followed the stranger.  They left Hameln by the Eastern gate and disappeared at Kalvarien Hill.  This is the oldest known account of this occurance.

Around this time a verse of rhyme is found in “zu Hameln im Kloster”.  It tells about the children’s disappearance.  It is written in red ink on the title page of a missal.  It bewails “the 130 beloved Hamelner children” who were “eaten alive by Calvaria”.  The original verses are probably the oldest written source of this legend.  It has been missing for hundreds of years.

Book edition from 1897 with pictures and drawings by Frank Kirchbach

It is not known if there is a connection between the oil painting and this book illustration.  In any case, Kirchbach showed us two facets of the same man: in the painting he is a trim heartthrob, in the drawing a sinister-looking rat-catcher.

Johann Frank Kirchbach (1858-1912) made an early name for himself with historical paintings, including a Nibelung cycle for Drachenburg Castle in Königswinter am Rhein.  From 1889, he became director of the School of Painting and Musical Composition at the Städelsches Institut in Frankfurt am Main, and in 1896 he became a professor at the Academy of Munich.  His style corresponded to the taste of the era. Kirchbach was a sought-after portrait painter and illustrator of numerous books.

Wieland and Goethe’s paperback appeared in 1804, published by Cotta Publishers. Included with a series of Goethe’s poems is also the text “The Pied Piper”. It is composed as a merry round and is certainly not recited, but sung. In 1815, Franz Schubert set the text to music, and in 1889 Hugo Wolf did.

The original manuscript of the first stanza was first presented at the Pied Piper Exhibition in 1934. It was bought by company owner Rudolf Lohmann, who donated it to the museum in 1956.  The other verses are located in the collection of the Weimar Classics Foundation. The sheet with the whole poem has clearly been removed at some point. It may be noted that the suffix “of Hamelin” has been omitted from the title.  The text is not a retelling of the legend, but rather its theme is the attraction between the sexes.

Tis me, the well-known cypher,
the widely travelled Pied Piper,
Whom this old and famous town,
certainly needs to have around;
Irregardless of how many rats,
or weasels on top of that;

Then sings so well the Piper Pied,
and gathers ladies to his side;
In many towns, it’s unmistaken,
the maids are quite completely taken.
Even lassies immaturely,
madames resisting so demurely;
their hearts akindle and aswoon,
as the Piper sings and plays his tune.

The Austrian painter Carl Karger (1848-1913) illustrated the Pied Piper according to Julius Wolff’s saga in a portfolio with 25 pictures.  Karger’s motifs were also sold as postcards.  The portfolio from which these illustrations originate belonged to George Pflümer.

Hilgers (1879-1944) created variations on the same figure using various artistic techniques.  Stylistically he belonged to the romantic tradition of the 19th century. The night-time panorama with the picturesque city perching on a hill in the background demonstrates his flair for spatial effects: Hilgers also worked as a stage designer.

The illustration of legends and fairy tales was his profession.  In addition to this Pied Piper series, Oskar Herrfurth (1862-1934) designed multi-part postcard series on the Town Musicians of Bremen, Eulenspiegel and Baron von Münchhausen.

The Pied Piper legend according to the Brothers Grimm is told on the reverse side of the cards.

Though both of the lithographs seem very different at first glance, they are by the same artist.  Stylistically these representations by Hans Meid (1883-1957) can be attributed to expressionism.

The autographed lithography by graphic artist and satirist A. Paul Weber (1893-1980) depicts an oversized flute player surrounded by crawling people. The metaphor of the Pied Piper refers here to the (political) seducibility of the masses.

The Pied Piper (according to Goethe’s poem)

Oil on canvas, signed (concealed by frame), undated, around 1900

A Pied Piper picture without children and (almost) without rodents? There were actually a number of such representations in the late 19th century, which did not relate to the well-known legend, but to Goethe’s poem.

The Pied Piper here is a minstrel. Instead of using a flute, he seduces the listeners with his singing, accompanied by the playing of his lute.  The picture appears to illustrate the third stanza of Goethe’s poem about the “womaniser”.

The historicising garments express the enthusiasm of the times for the Middle Ages.

In around 1920, using the manuscript found by him and his pen-and-ink drawing, Guido Freydank painted the Pied Piper in full form in oil. It remains unclear why the public only became aware of Freydank’s discovery and his pictures in connection with the 650th anniversary celebrations.  Were “sensational discoveries” fabricated to arouse greater media interest? Was the lack of medieval evidence for the legend artificially remedied?

The firm Reinicke & Richau was established in 1890 in Brunswick by the master stove builders Hermann Reinicke and Franz Richau. Richau left the company after two years and emigrated to America.

In 1907/08, Hermann Reinicke bequeathed the firm to his employee Gustav Achilles. He developed the transportable tiled stove.  Between the world wars, the firm achieved great importance with the manufacture of the “Brunsviga Stove”, which was affordable for all. Konrad Achilles, the grandson of Gustav Achilles, thus also spoke of the “People’s Tiled Stove”. After the Second World War, the business activities of Reinicke & Richau were relocated.  The construction of stoves was ended, and ovens and cookers were sold instead.

This tiled stove appears to have been one of the early portable models, which were mainly fuelled using wood and lignite.  The production of such ornamental stoves was completely discontinued in ca. 1920. The tiles for stoves of this type were sourced by Reinicke & Richau in Meißen.  The cast iron elements were sourced either from the Tanner Hütte (Harz) or Duisburg.

The museum bought the oven in 2009 from a private owner.