In the late 19th century, interest in the Pied Piper of Hamelin increased dramatically. In 1875, the extremely popular epic poem of Julius Wolff was premiered, and in 1879 the opera of Viktor Nessler. The potential of the old legend was also recognised in Hamelin: 600 years after the supposed procession of the children, a large jubilee celebration was held in 1884.

The Pied Piper subsequently became a poster child for tourism. Brochures, picture collections, postcards and souvenirs with his picture have been produced.

Jubilee celebrations also occurred in Hamelin in 1934, 1984 and 2009. The character of the celebrations exemplified the Zeitgeist. The 1934 jubilee also had a recognisable political dimension: The legend was used by the National Socialists for propaganda purposes.

The Pied Piper anniversary in 1934 is further evidence of the dangerous ability of the Nazi rulers to organize large-scale events, advertise them on a large scale and use them for political propaganda. People are mobilized by appealing to their „national duty“ to participate. In contrast to the festival weekend 50 years ago, the celebrations extend almost all year round.

The treasure of imperishable legends is one of the finest pearls of German folklore.

Gerda Riege is the sister of the Hamelin painter Rudolf Riege who is considered the best-known graphic artist in Weserbergland.

The organisation of the festival lay for the most part in the hands of the district administration of the NSDAP. Among the scheduled events were mixed together torch processions of the SA, military parades and an “ethnic German mass active game”: “Volk will zu Volk”. The jubilee celebrations thus also turned into a political propaganda function.

The motto of the Pied Piper festival, “German history, German legend, German landscape calls to you!” makes it clear that the organisers in 1934 had more in mind than merely the celebration of a Hamelin city festival.  Can the terrible events of 1284 be considered a cause for celebration at all?  In contrast to 50 years previously, the figure of the Pied Piper was not made into a hero, but rather the legend was presented as an example of “real German folklore”.

The Hamelin tourist office, founded in 1914, describes itself as an establishment for the promotion of the city’s tourism.  It works closely with the city administration. The first brochures appeared in the 1920s.  Hamelin is promoted as the “Pied Piper city in the Weser Hills.” In 1933, the citizens of Hamelin were requested to provide “active assistance”.  In May 1934, the office asked the Director of Studies, Heinrich Spanuth, to arrange an exhibition of the Pied Piper legend. Within six weeks, the jubilee exhibition resulted, “The Pied Piper legend in words and pictures”. It later formed the basis of the Pied Piper collection of the museum.

The Hamelin Delius pottery, rich in tradition, produced a ceramic Pied Piper figure to mark the Pied Piper jubilee. The company logo of the pottery had always been a rat symbol. Because of this, it did not present any great difficulty for the management in 1934, as the “pottery with the rat”, to produce high quality souvenirs for the jubilee.

The circular red badge was the official festival emblem of the Pied Piper jubilee in 1934. The festival participants had to be expressly able to “identify” themselves.  Each badge wearer also had the opportunity to participate in a tombola. “Hamelin good luck rats” made of parish chocolate could be bought for 30 Reichspfennigs. Each fourth rat received a winning ticket.

The triangular pin badge was used as a mark of identification for the promoters of the Pied Piper festival. This not only meant helpers and organisers, but also those businesses and places that were prepared to spread information and sell festival badges, commemorative publications and good luck rats. The “street hawkers” without a permanent business also wore an armband with the title “tourist office” and a number.

In contrast to 1884 – many people arrived by their own automobile, motorcycle or bicycle. Parking spaces had to be arranged for the cars:  a supervised parking area in the Sedanplatz and various unsupervised surfaces were made available. Similarly to the Bückeberg festivals, which had occurred annually since 1933, the direction of traffic represented an enormous organisational cost.

The events of the 650-year celebrations of the Pied Piper legend lasted from May to September 1934. The main festival week took place from 24th June until 1st July.  Similarly to 1884, local artists were attracted and mainly contributed to designing the cultural part of the events. The author Bernhard Flemes devised a theatre play, which was first performed on 26th June. On the same day, the Pied Piper art clock together with glockenspiel was ceremonially inaugurated. The puppet artist Marga Rulff performed a Pied Piper puppet play in the city hall “in eight pictures”.  The open-air play, which had taken place regularly since 1930 under the direction of Magda Fischer, formed the core of the events line-up alongside the historical festival parade. 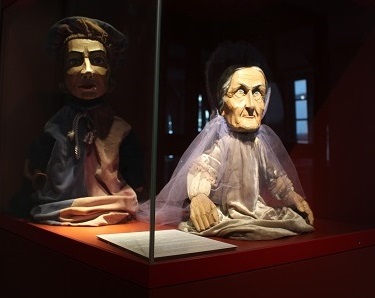 Two puppets from the puppet theatre of 1934, © Museum Hameln

The jubilee of 1934 was planned as a large festival with many events. In March 1934, Rulff’s Artist Puppet Games from Bad Pyrmont was commissioned by the city of Hamelin to stage a puppet show for the jubilee celebrations. Some of the beautifully-made puppets were preserved in Hamelin Museum, including to be seen here: Pied Piper and Madam Fable.

Marga Rulff based her songbook on Grimm’s fable template. But typical puppet show elements were also interwoven: The clown as a servant always speaks turned to the audience.  Together with Madam Fable, he frames the actual plot.

From June to October 1934, several performances of the puppet show took place as part of the legend jubilee each week at the meeting hall in the garrison church.

Rulff’s production envisaged that all dramatic, i.e. real scenes would be represented by puppets. All mythical scenes should be performed with the help of an artistic shadow play. The fantastical in the night-time rat procession appeared likewise in three silhouettes in the same way as the procession of the children.

The design and production of the impressive shadow scenes was undertaken by Lotte Reiniger, the animated silhouette film artist from Berlin, already widely known in 1934.

The first jubilee took place on 28th and 29th June and was a splendid success. An array of photographers seized the opportunity to document the event with the new, modern technology and then sell their pictures.

The magnificent album with golden inscription: “Recollection of the Pied Piper festival in Hamelin” and the two framed commemorative coins contain studio and outdoor shots of the event.  The first “full-time” Pied Piper actor is also represented: the businessman Adolph Pietsch.

The album is part of the estate of the Hamelin family Silberschmidt and was placed in the museum in 1936.