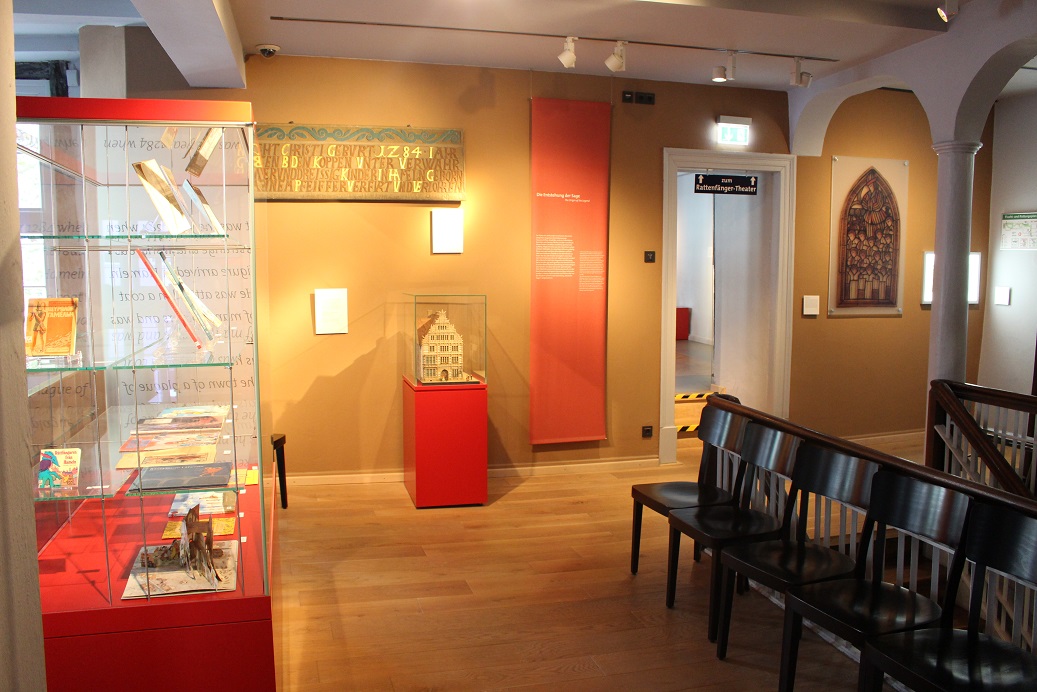 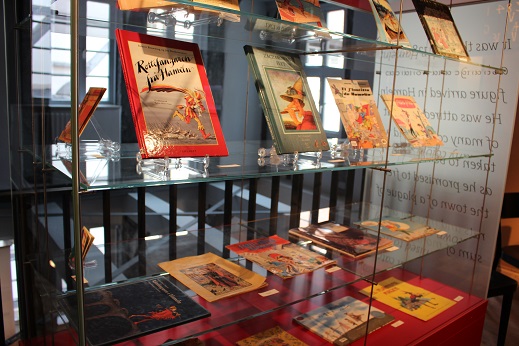 The Origin of the Legend

In the early 16th Century the first concrete evidence for the children’s exodus appears. Inscriptions found in houses, pictures in a piece of tained glass and a memorial stone tell of the colourful piper and the lost children.  The pictures and the words are astoundingly similar.  It is possible that a commonly know 4-line rhyme had been in existence since the Middle Ages.  You could also read this verse in the picture of the piece of stained glass that disappeared from the Market Church in 1660.  Whether the old glass window had been placed in the church wall soon after this occurance in 1284?

The nobleman from Elsace, Augustin von Mörsperg, had still seen it in 1592.  He had it copied down.  The oldest pictorial depiction of the Pied Piper comes from him.  In the late Middle  Ages the legend had already been intertwined with the story of the betrayed “ pest controller”.  This is the version that the Brothers Grimm used when they compiled their collection of German myths and legends.

It became fashionable in Hamelin in around 1600 to represent the legend of the Pied Piper on houses.  Carved in wood or chiselled in stone, this  referred to the “popular verse” which had been circulating since the Middle Ages.   It demonstrated the intergenerational interest of the citizens of Hamelin in their fable. An inscription chiselled in stone was also embedded on the wall of the registry office, completed in around 1617.

1284 years after the birth of Christ,
in truth one-hundred-and-thirty children born in Hamelin
went missing from their cribs,
led away by a piper.

Osterstraße 28 with inscription to the Pied Piper, around 1600

In around 1600, the rich Hamelin citizen Patrizier Hermann Arendes re-designed Osterstraße 28 in the renaissance style.   A stone façade was built on the gable end.  The half-timbered eaves remained undecorated.  Did the sideward timber inscription on the legend of the Pied Piper already exist previously?  Or was it added by Arendes? The inscription refers to the rhyme attested to by other houses from the 16th century. The carved work and position of the house on Bungelosenstraße, along which the Pied Piper led the children according to the legend, explain its modern name:   “Pied Piper house”.

In the year 1284 on the day of Johannis and Pauli
on the 26th June,
130 children born in Hamelin were
led away by a piper dressed in colourful clothing
and went missing from their cribs to Calvary.

The oldest source linked to the Pied Piper legend could be the glass window of the Marktkirche, which has however not survived.  According to eye witness reports, it depicted in around 1650 “an old figure of a man in colourful clothing surrounded among other things by a mass of children.”   The transcript formed a verse, which back then only survived in garbled form with the date 1572. In that year, the picture was repaired by the Mayor Poppendick. Many illustrations and reported rumours referred directly or indirectly to the glass picture. Efforts to reconstruct the window picture and text were based on them, e.g. by local historian Hans Dobbertin. 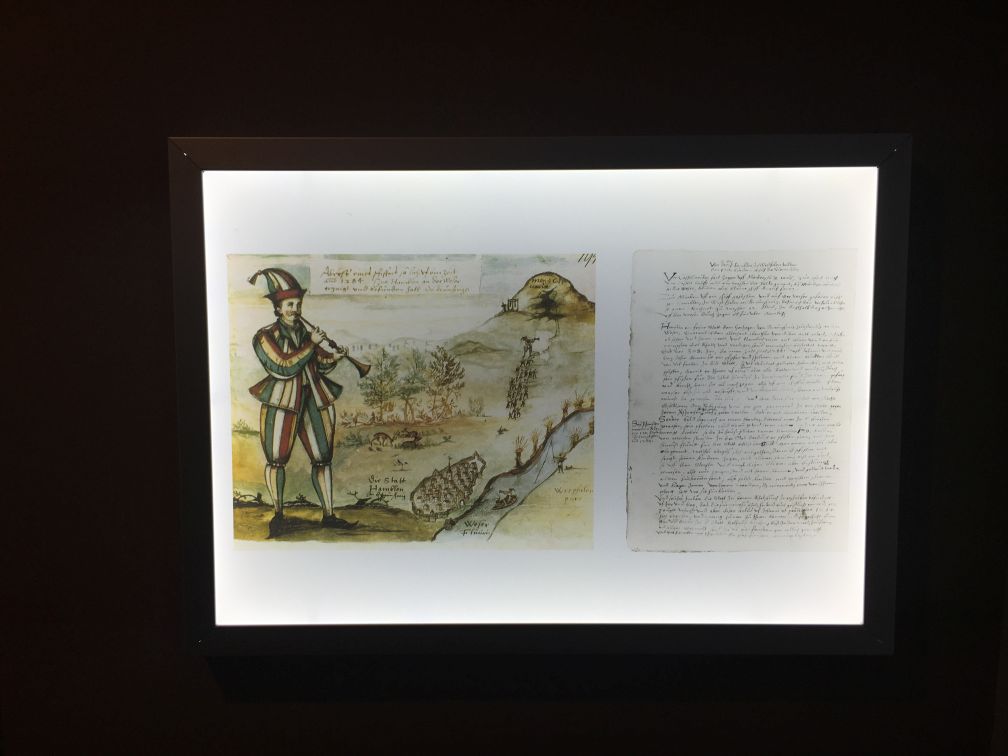 The tale of Mörsperg, © Museum Hameln

Augustin von Mörsperg was a baron and knight of the Order of Saint John. In the last two decades of the 16th century,  he travelled across the whole of Europe.  In 1592, he visited Hamelin because he had heard of “all kinds of adventures” in this place.  He wished to “see and hear” for himself what it was all about with the Pied Piper story.  He consulted advisors and the clergy.  He obtained insight from a Hamelin “city book”. But most impressive seemed to him to be the many pictures and inscriptions in guesthouses and at the city hall – especially a glass picture in the Marktkirche.  He had this picture copied.  The watercolour is the oldest pictorial representation of the Pied Piper and after the loss of the window, it is the only piece of evidence.

[…] boarded a ship to [Hannoversch] Münden and rode on the Weser to Hamelin in Westphalia, located at the boundary with Brunswick; I planned to ride there, I estimated that the 12 miles by water could be traversed in three-and-a-half days on the Weser. […] Hamelin is a fine city on the Weser in the possession of the Duke of Brunswick. [I journeyed there] because I had heard about all kinds of adventures in this place, and I now wished to see and hear it for myself: not only from the most distinguished advisors and priests, but everywhere I found it confirmed that 308 years ago [1284], on the day of Johannis and Pauli, a piper and minstrel wearing a brightly multi-coloured gown [is said to have come] to this city. [He is said] to have caused great marvelling with his pipe, in a short time he led all the rats and mice out of the city and into the River Weser with his piping. They followed him, he [boarded] a ship and [waited] until all had drowned. […]

And in the city [for this service he was] rewarded with a low wage and little recognition. [He was offered less than the promised 30 gold thalers and was mocked.] Soon thereafter on a Sunday, when all were at the church, he returned, played his pipe again, and then a large number of children followed him who had stayed at home, namely 130 children, and they came from all streets in the city through which he went piping. He led them out of the city, 100 steps to a hill named Calvary which opened up. The piper entered with all of his children, all of them. Only one remained lying in the street, but mute, could not hear and could only point where the others had gone, and that the children had gone missing miserably with great fright and complaints and nobody knew where they had gone.  That this story is true is attested to by the fact that the city commemorates this event in its city records to the year and day, the most noble advisors and chaplains have confirmed to me that it […] did happen. This story is not only depicted in many places in the city, at the town hall and the church, even in the taverns, but is also decoratively represented in many glass windows, and therefore I had them copied as seen.