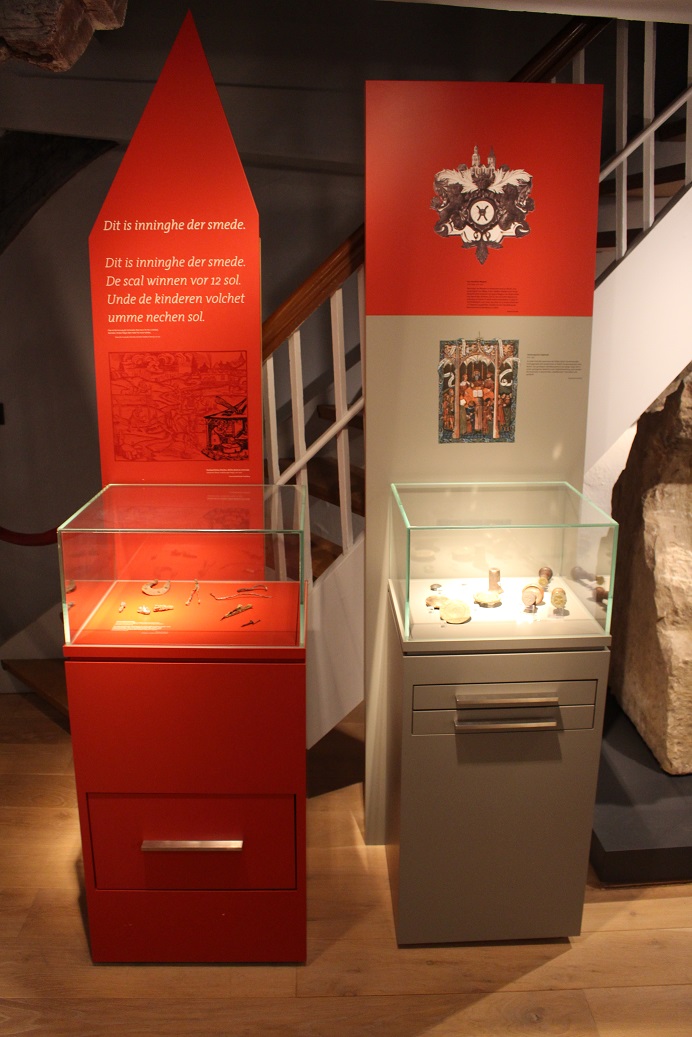 Blacksmith and coat of arms of Hamelin, © Museum Hameln

The blacksmith’s field of work was very varied: there was evidence in Hamelin of large-scale and fine forging, horseshoeing and armoury, and gold and silver smiths. Each type of highly specialised craftsmen formed their own respective association.

If cinders are found in a medieval earth layer during excavation, this is a clear indication of metal mining or the work of a blacksmith.  This has often been the case in Hamelin. The finds demonstrate correspondingly where the smiths used to work.

So-called flowing cinders resembled solidified wax. They arose when molten cinders had run out of the bloomery furnace. Cinder flow was thus an indication of iron smelting.

In contrast, metalwork produced skull-like cinders.  Steel was manufactured from raw iron during the blacksmithing process, and these cinders arose in this way.

The Hamelin coat of arms

Only the nobility was originally entitled to develop and bear coats of arms. In the cities, rich burgher families also asserted claims to their own crests. The cities themselves and their councils followed suit.  The Hamelin crest was first evidenced in the early 16th century. The shield depicts the millstone and millrind, the millrind is fashioned into a stylised “H” [Hamelin]. A representation of the St. Boniface Cathedral is to be seen above.

Cities gained in power vis-à-vis the sovereigns in the Late Middle Ages due to their economic strength. They demanded more rights. The increased self-confidence of the townspeople showed itself in the ever greater requirement for a public image. The claims were also formulated and structured in grand “city books”.

The solidus was the main coin of the Middle Byzantine Empire.  Until the beginning of the 12th century, it was the “leading currency” for the whole of Europe and the Mediterranean region.  The coin was possibly brought to the Weser Hills by a returning crusader. The objective of the Fourth Crusade declared by Pope Innocent III was intended to be Egypt. The crusaders instead turned against Constantinople, which was conquered and plundered in 1203/04.

The one-sided Hamelin hollow penny shows a millrind on the front side in a circle.  The city council took care to present a uniform image on official seals, crests and coins.  This was certainly also the subject matter of contractual negotiations with the mint master Peter Haveman in 1436. This is probably a 1/4 shilling, according to contract: a “large hollow penny called a Drilling.”

Mint masters were independent entrepreneurs who, in free agreement with the minting authorities, determined weight, standards and self-participation.  The city was granted the right to mint and issue coins until the Early Modern Age by the diocese provost, but was practically autonomous in its control of minting. The Hamelin mint master Haveman used this mint die to press shillings. The embossing surface shows a crutch cross with transcription.

The seal stamp – also called typer – identified the will of the seal owner.  Carried in the hand of a messenger or commissioned person, or worn as a ring, it was used as identification. By using text, the imprinted seal could produce signatures on documents. While the main or large seal was used for the authentication of important matters and privileges and was usually sumptuously constructed, small seals were used for less important business matters and letter seals.  The small seal of the city of Hamelin only shows the millrind centrally.  The marking “HAMELIN QUERN” is carried in the transcription.

This is the oldest known imprint of the Hamelin seal. It depicts the round millstone with millrind.  The transcription reads: “SIGILLVM QVERNHAMELENSIUM +” and shows that the city – possibly through use of the name in contemporary documents – at least temporarily bore the appellation “Quern Hamelin” which was later discontinued. The city seal illustration was described in a document from 1407: “in medio apparuit figura molaris, que vulgariter dicitur querensteyn” [In the middle appears the form of the millstone, which amongst the people is called the quern stone].

The seal illustration corresponds to that of the oldest seal imprint from the 12th century. The surface is divided into over a hundred squares standing upright, which respectively display a round indentation with four small headers. The headers are connected crosswise with each other by two fine lines. The extreme filigree work was intended to prevent counterfeit seals. The hardly recognisable details possibly fulfilled the function of watermarks on modern banknotes.

This seal illustration also corresponds to that of the oldest seal imprint from the 12th century. The transcription is also supplemented by a reference to the citizens of the city: “SIGILLUM CIVITATIS QUERN-HAMELENSIS”. The seal was no longer intended to manifest only the abstract will of the city, but also the will of its citizens.  Nevertheless, in the production of new stamps – the old one could have been lost or become unusable – it was attempted to leave the illustration and inscription as unchanged as possible.

Secret seals were used as checks and counter-seals for classified matters. In the course of the 14th century, secret seals – in contrast to the original purpose – were used increasingly as small seals for less important matters.  The sophistication of business transactions in late medieval Hamelin can be inferred from the various seal stamps used in parallel.  The Hamelin secret seals invoked the large seal with the millrind and marking “QUERNHAMELENSIUM”, with the instruction “SECRETVM” added.