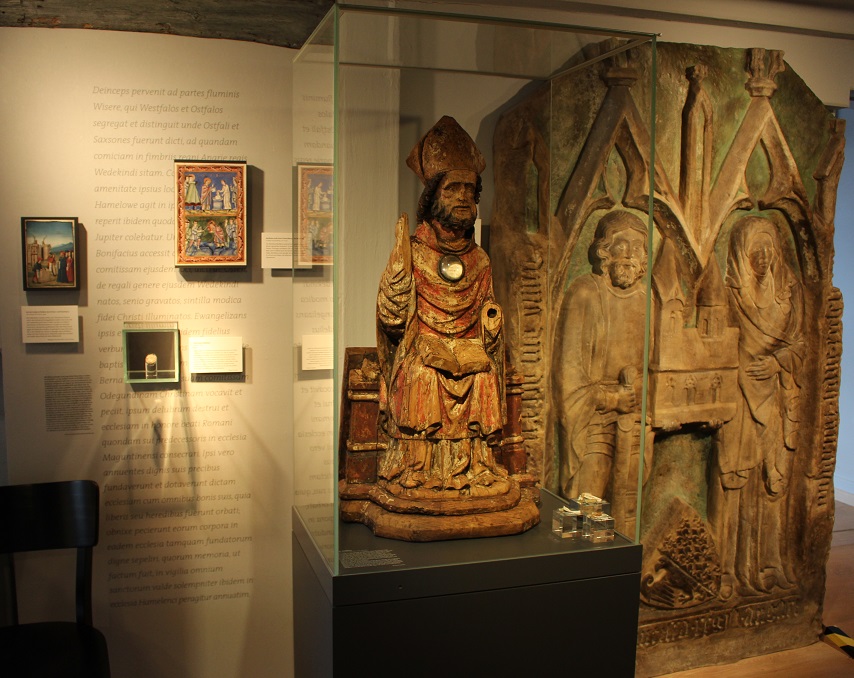 Founding of the monastery, © Museum Hameln

Founding of the monastery

[Boniface] arrived in the River Weser region separating Westphalia from Eastphalia. Eastphalia was also called Saxony due to a certain county located at the edge of the Kingdom of Angria, the Dominion of King Widukind. Boniface let his gaze sweep over the loveliness of this place where the little River Hamel flows into the Weser, and discovered a temple there in which the god Jupiter was being prayed to. So he went before the Count and Countess of this place. They were of the royal house of Widukind. They were already bent by age, but illuminated by a gentle spark of Christian belief. Boniface preached the gospel to them and all of the people in that place, and when he renewed them in the baptismal source, he christened the Count Eberhard in the name Bernhard, the Countess Odegunde in the name Christina and bade them both to destroy that temple and build a church there, to the glory of the holy Romanus, who at one time was his predecessor in the church at Mainz. They agreed with his worthy pleas and founded the said church and filled it with all of their possessions, because they had formerly been robbed of their inheritance. They requested imploringly for their bodies to be buried there, as befitting of the founders [of a church]. And so it was, and their memory is celebrated each year on the day before All Saints’ [31st October] in the church of Hamelin.

Charlemagne as promoter of church and monastery construction

The heathen Saxons should convert to Christianity and be integrated into Franconia. This was the goal of the Frankish King, Charlemagne. The construction of monasteries and churches as mission stations was thus an important instrument. Saxon Duke Widukind led the opposition to the Franconian conquerors. He succeeded in defeating Charlemagne’s army in 782 at the Battle of Süntel, but finally the Franconians prevailed. Widukind yielded and was baptised. The last resistance died out in 804.

Boniface christens a Frisian/ordeal of Boniface

The missionary Boniface was born in England in 672. He was known as the “Apostle to the Germans”. He evangelised from 716 in Frisia, Hessen, Thuringia and Bavaria.  According to legend, he is also said to have founded the Hamelin monastery on a journey to Frisia. Boniface was slain in 754 or 755 at Dokkum. He is said to have tried to parry the deadly blows with a book.

Hamelin was originally a mint of the Abbot of Fulda. Silver coins were minted under Abbot Markward I in around 1160 in Hamelin. The Hamelin bracteate shows the Abbot of Fulda Konrad II between medieval towered walls. Possibly the circles visible below on both sides represent millstones.  The motif was used later on the municipal seal, arms and coins.

The coin originates from treasure from the time of the third crusade. It was discovered in Turkey.

Saint Boniface, the third patron of Hamelin Cathedral according to Romanus and Emerentiana, is represented. The style of the figure indicates that it was presumably made in the Upper Weser region of Lower Saxony.

On the breast of the figure is half-round, transparent quartz. Magnified by the stone, a document listing relics can be seen. They were in the cavity behind it and have survived almost complete.

The sculpture is severely impaired: both hands, which were attached, are missing. The bishop’s crook has disappeared, the nose is damaged, and there is a deep hole on the mouth. Nevertheless, the residue of the original colour scheme remains in places and the effect of the figure is still comprehensible.

around 1370, Original in Hamelin Cathedral

At the beginning of the 9th century, the Saxon Count Bernhard and Countess Christina ruled over the Weser region. They occupied a fortified manor on the Weser near the Hamel estuary. As newly baptised Christians, they established a church in 802 or 812 and were also buried there. Before their deaths, they bequeathed the church, together with their landed property, to the Abbot of Fulda. He established an ancillary monastery there.
In around 1370, this stone monument to the count and countess was erected. It shows the count and countess at the church foundation. The inscription reads: “+ anno domini DCCXII bernardus comes xpina comitissa regni angari de osten fundarunt hanc ecclesiam” or “In the year of our Lord 712, Bernhard and Christina of Ohsen, Count and Countess of the Dominion of Angria, built this church.”