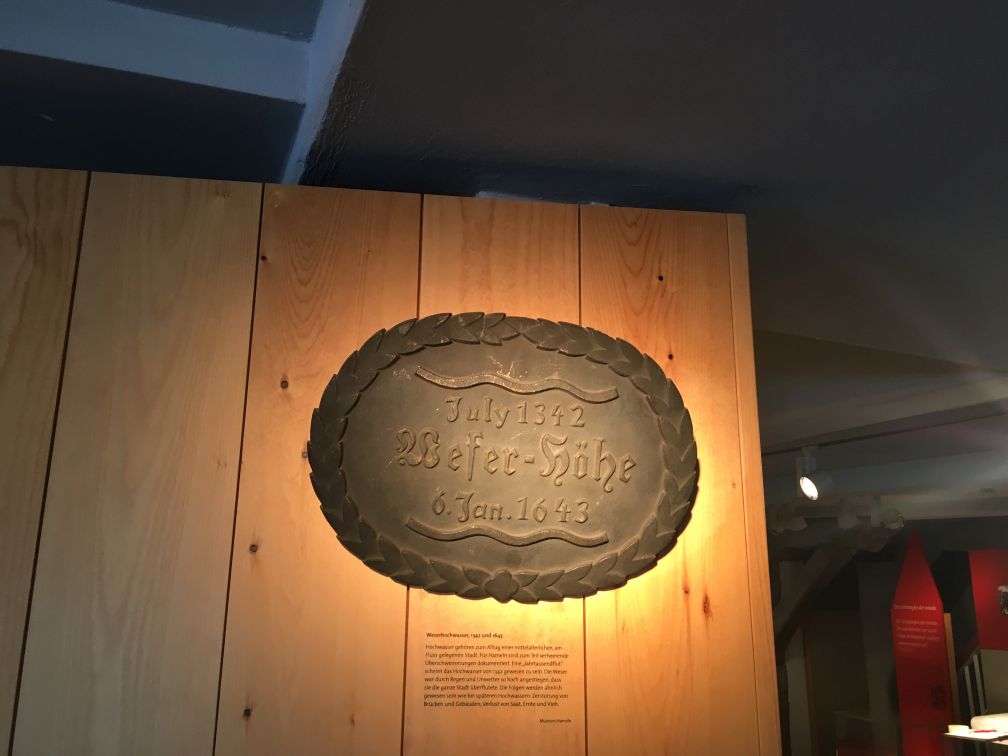 Building Houses in the Middle Ages

Flooding was a normal occurrence in a medieval town located on a river.  Disastrous floods in Hamelin are partially documented.  The flood of 1342 seems to have been like a “once-in-a-thousand-years” event.  The Weser rose so high following rain and storms that it flooded the entire city.  The consequences would have been similar to those of later floods:  the destruction of bridges and buildings, and loss of crop seed, harvest and livestock. 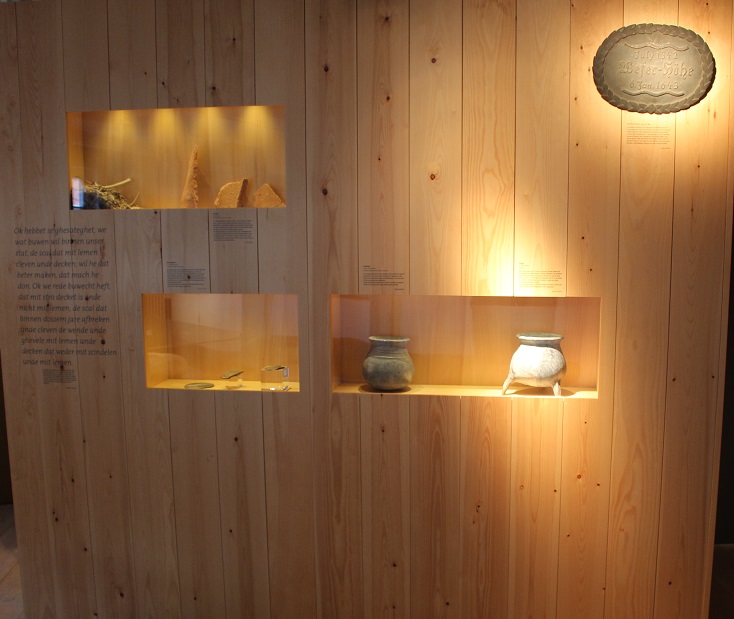 They have also decided, whoever wants to build in our city, they must plaster and roof using clay. If they wish to do it well, so may they do it. Also, whoever already has [a] building roofed with straw and not clay, they must within this year tear it off and plaster the walls and gables with clay, and roof again with slate and clay.
By order of the Council, 19th March 1385

Wood was commonly used in medieval Hamelin for construction – as in other cities.  This represented a high fire risk. A city fire was among the great catastrophes which could befall a medieval town. It was very difficult to bring under control and could destroy large parts of urban areas.

The city council therefore decided in 1385 that clay must be used for construction both outside and inside the city walls.   The roofs could no longer be covered with straw, but only with roofing tiles.  If these regulations were not observed, the house was demolished.

The rounded jar consists of grey product. This refers to a specially fired, very hard clay.  Grey product was the typical everyday ceramic in the Middle Ages – it is very commonly found during excavations.

Such rounded jars were used for cooking.  They were placed directly in the fire and heated in this way.

The tripod skillet is an early form of grey product. The tripod skillet was used as a cooking pot and was placed directly in the embers. The three legs maintain a certain distance from the heat.  Since the pot is round underneath, the liquid always collects in the middle of the base – the deepest and hottest place in the pan. The food therefore does not burn.

Heat is distributed over the inner surface of the pot and slowly and evenly delivered to the food.

The new construction of the pedestrian zone was supervised archaeologically by the municipality.  Archaeologists could perform frequent selective excavations. The base and staves of this cup were found. They lay in a layer of earth which was probably the remnants of a grave.  The damp earth had conserved the wood.  The vessel was filled in and put together by archaeologists.

It became apparent during the excavation that the medieval street lies 1.70 m beneath the modern street. 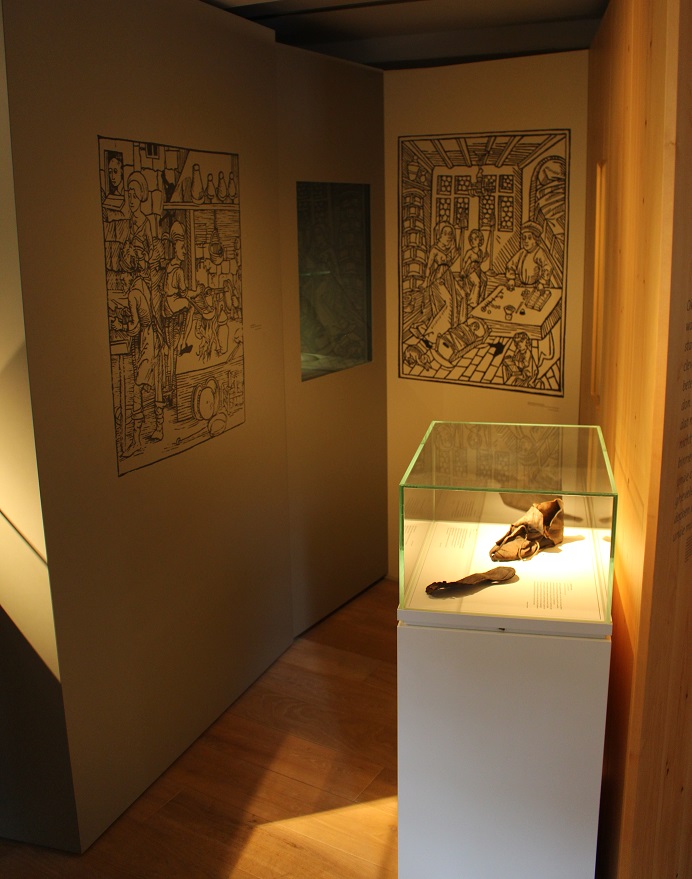 Leather work and shoemaking were found in early times in Hamelin. The shoemakers’ association was one of the most powerful professional groups from the Middle Ages onwards. Since leather shoes were expensive, repairs were often preferred to a new purchase.  Cobbling thus developed as an independent trade.

This shoe has been restored so that one can better see the outer form.

Leather must be tanned to free it from skin and hair and make it supple for processing.   Cattle, sheep and goat skins were all worked.

After the skin had lain for a long time in a tub with lime wash or potash, the hair was removed with a scraping knife.  The actual tanning occurred in cavities with brine made of oak bark, the tanning agent. It was time-consuming and dirty work, and the smell was very strong. Leather production thus usually occurred on the outskirts of the city. 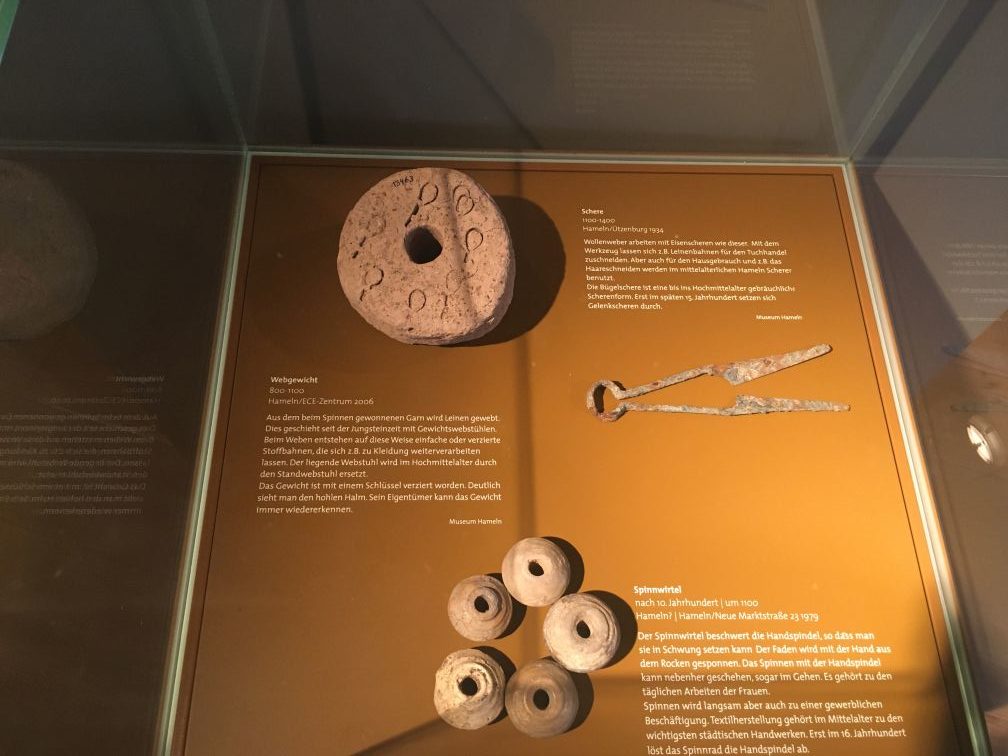 Wool weavers worked with iron scissors like these.  Lengths of linen, for example, could be cut with this tool to sell cloth. But scissors were also used in households and,for example, for haircutting in medieval Hamelin.

Spring scissors were a form of scissors that was used into the high-medieval period. Only in the late 15th century were hinged scissors introduced.

The yarn produced by spinning was woven into linen.  This was performed with vertical looms from the Neolithic Age. Simple or decorated lengths of material were produced by such weaving, which could then be further processed, e.g. to make clothing. The horizontal loom was replaced by the vertical loom in the high-medieval period.

The weight is decorated with a key. The hollow stem can be seen clearly.  The owner could always have recognised the weight.

The spindle whorl weighs down the hand spindle, so that one could set it in motion.  The thread was spun by hand from the distaff.  Spinning with the hand spindle could occur simultaneously, even whilst walking.  It was among the daily activities of women.

Spinning slowly but surely became a commercial occupation.  Textile production was among the most important urban handicrafts in the Middle Ages.  Only in the 16th century did the spinning wheel replace the hand spindle.