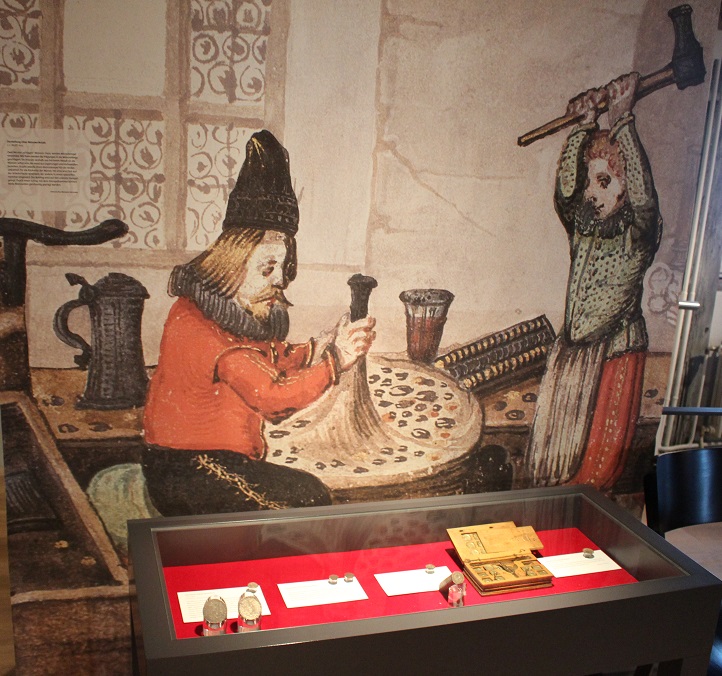 Representation of a mint workshop

Two masters are “stamping” coins. Coin stamps are being used. The imprints were stamped onto coin blanks using them. They therefore had to be made of harder metal than the coins themselves, which were usually precious metal alloys. There was one coin stamp for the front side and one for the reverse side of the coin respectively. One was fixed to the work surface, while the other was placed in a special hammer. The blank was placed on the lower stamp. With one blow from the stamp hammer, both sides of the coin were simultaneously minted.

The coin was made by Nicolaus Oppermann, who was demonstrably the mint master in Hamelin from 1619.  He was a notorious “kipper” mint master, who often changed his location. “Kippen” means the trimming or filing of the edges of a coin. The precious metal weight now lay below the prescribed value of the coin.  This was a form of monetary devaluation. Oppermann was investigated not only for his coin debasing, but also for manslaughter.

The Hamelin mint master Georg Arendes stamped this three-penny piece. He worked in Hamelin between 1622 and 1625. The front side shows the portal of the Cathedral with the Hamelin millstone and millrind. On the reverse side, the royal orb with indication of value and year can be seen.

The one-third penny shows the Cathedral with millstone and millrind. The bent left tower of the church is noteworthy. Is this a reference to the Reformation?

In return for a tax allowance of 13,000 guilders, the city received assurances from Duke Erich II in 1556 that it could remain Lutheran.

This thaler is stamped by mint master Christoffer Feustel, who worked in Hamelin between 1615 and 1618.  He settled in the city during this time and rented the mint.

Mary Groschen coins were minted in today’s Lower Saxony region. The standing Mother of God lends her name to the coin. The Hamelin millrind in a circle of beads can be seen here.

It is noteworthy that this coin was manufactured with the coin stamp shown here.

The Fürstengroschen shows the Cathedral with millstone and millrind. The coin is made by Georg Busch, who was the mint master in Hamelin from 1569 to 1575.

Dietrich Busch was the mint master in Hamelin from 1575 to 1583. Was he a relative of his predecessor Georg Busch? The Gösken minted by Dietrich Busch shows a large millrind with the year. 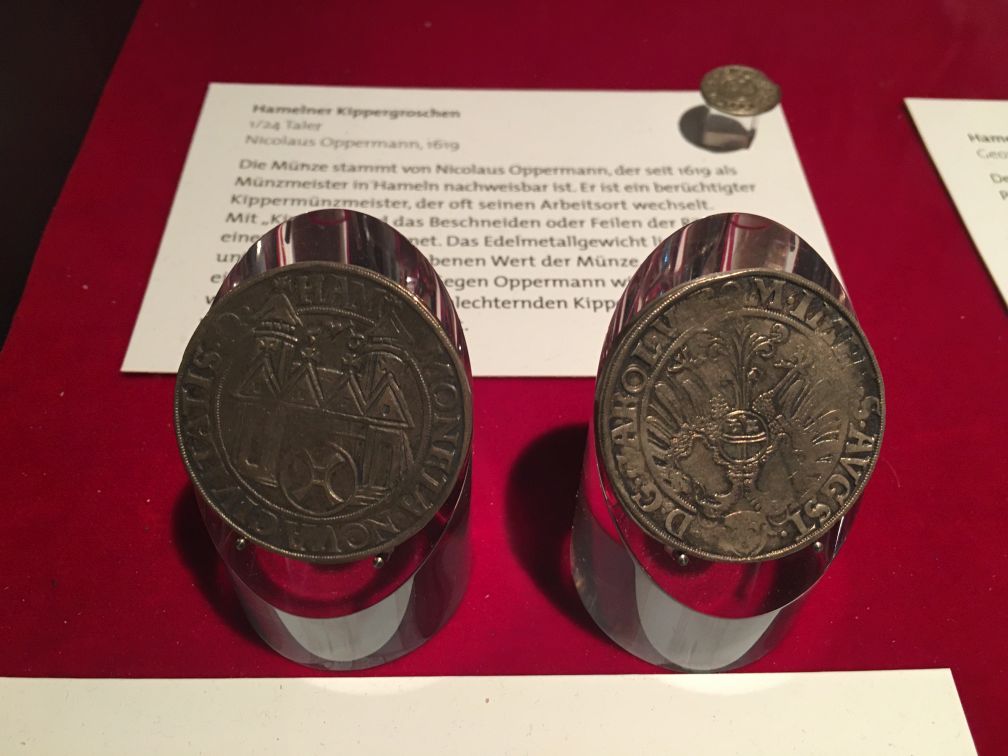 The silver thaler shows the Cathedral on the front side with millrind and millstone between the towers. On the reverse side is imprinted the double-headed imperial eagle. The thaler originated from the mint master Wulf Wegener. He worked for the Hamelin mint between 1549 and 1569.  He probably worked simultaneously in Minden and stamped low-value [“nasty one-third penny”] coins with lower precious metal content.

Many different coins were in circulation in the Early Modern Age. They usually contained different proportions of precious metals. To determine the value of coins or to calculate their interrelationship, one required a pair of coin scales. The piece shown here was made so that it can also be used by the illiterate: The weights carry no labels but instead illustrations of the coins whose weight they represent.