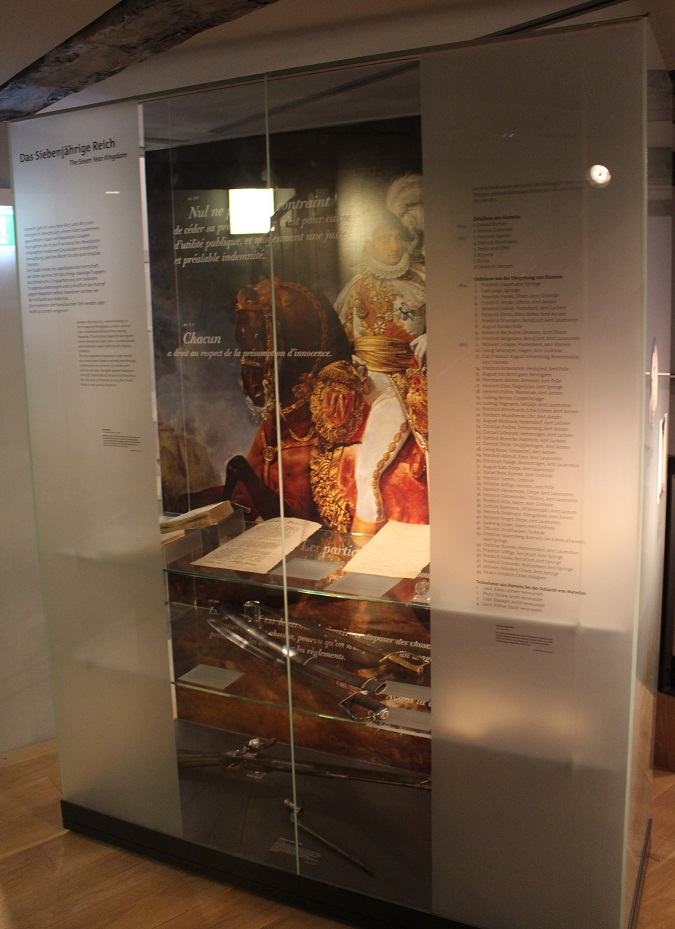 Between 1807 and 1813, Hameln belongs to the Kingdom of Westphalia, a multi-cultural state created and tolerated that way by Napoleon. The principles fought for during the French Revolution apply here: a constitutional administration; equal rights for all; religious tolerance. The city experiences Napoleon’s reign mostly as a time of war: troops constantly marching by, billeting and recruitment of soldiers and last but not least, the fight against Napoleon himself.  78 citizens die at the Battle of Waterloo. The taste of freedom during the French Period is not quickly forgotten.

King Jérôme
Baron Antoine Jean Gros, 1808
Napoleon appointed his brother Jérôme as the ruler of the newly created Kingdom of Westphalia. The power structure of the whole state had to be reconstructed. The new king’s position was at first insecure.
His pretension to power is very clear from the splendour and pose of the portrait.
Bridgeman Art Library

“Codex Napoleon”
German edition, Straßburg/Paris, 1808
In 1804, Napoleon Bonaparte enacted the first civil statute book, the “Code Napoléon”, in France. It was also introduced in all conquered states. The “code” also came into force in the Kingdom of Westphalia from 1st January 1808. The 2,281 articles of the German translation do not definitively clarify every single legal question, but leave the legal practitioners some scope. It quickly became the basis of jurisprudence.
The “Constitution of the Kingdom of Westphalia” was enacted on 15th November 1807. It was the first constitution of a German state. The Westphalian “Parliament” was also the first of its kind on German soil.

“The Citizen’s Companion to the Kingdom of Westphalia”
Franz Hartmann (ed.), Halle, 1807
Many provisions of the French civil legal code were new and unfamiliar to the German subjects of the foreign monarch. The “Citizen’s Companion” was written for non-lawyers and conveys basic knowledge on the main features of the new jurisprudence: The “Code Civil” envisages the equality of all people before the law – but not for women, however. It was also a precursor to Jewish emancipation. It established commercial freedoms, and likewise the ending of serfdom and the abolition of tax advantages for the nobility.
After the end of French domination, the “Code Civil” was abolished, but the new ideas had come to the world!

Lampoon
Kassel, 1813
The citizens experienced the period under Jérôme as a time of privation and drastic changes to their living circumstances.
Insecurity, anger and fear were expressed publicly – e.g. in a lampoon. The written form of the pamphlet mocks Napoleon’s reformative project: It resembles an official government declaration with paragraphs, regulations and provisions. These were certainly more than ironically formulated. The king is denigrated as the “Hellhole Wren-King of Westphalia, French Air-Prince.” The end of the kingdom is prophesied, a return to cubit length measurement announced. How sickening the introduction of French standards and requirements was for the German craftspeople is expressed in the announcement that they would sooner produce “Paris snuff tobacco in Baltimore.”

Proclamation
Kassel, 1810
Napoleon Bonaparte appointed his brother Jérôme as the King of Westphalia in 1807. He wanted Jérôme to develop Westphalia into a model state. The modernisation of state, judiciary and administration should then set an example for other German states. Jérôme was 23 years old and known for his sharp intellect, as well as his generosity and enjoyment of celebrations. He found it difficult to express his own identity due to his elder brother’s fame. Westphalia was dependent on France. It was under the political and military control of the French.
Jérôme made this proclamation to the Hanoverians, which was reproduced in handwriting by a citizen. He articulated demands of his new subjects on the one hand, but promised them protection on the other hand.

Knight’s Cross
1809
The Kingdom of Westphalia consisted among other things of former regions of Hessen-Kassel, Brunswick-Wolfenbüttel, areas of Prussia and Hanover and also parts of the royal bishoprics of Hildesheim, Paderborn and Osnabrück. The capital city was Kassel.
The inhabitants of these very different regions were to be bound to the new state through the awarding of decorations. The Knight’s Cross 2nd Class was such a commendation of the Westphalian crown.

Seal stamp
after August 1810
The appointment of the new ruler was celebrated in Hamelin on 14th March 1810. The citizens had to swear an oath to the new constitution publicly, namely in front of the town hall. The city administration converted to the French system at the end of August: The city of Hamelin was now declared to be a municipality.  It belonged to the district of Rinteln and the ministry of Leine. The mayor was now called Maire, French was an official language alongside German and the franc was valid as currency.

The seal originated from the Haspelmath Collection and was among the first objects of all that were placed in the museum’s collection in 1899.

Poem of thanks
Hamelin, 1816
A gate of honour and a large festival greeted the soldiers returning home on 25th January 1816. The city had a poem of praise and gratitude composed in honour of the victors over Napoleon. The struggle against the French was declared by the unknown poet as a “great victory for justice”.

The poem was placed in the Hamelin Museum in 1899 as a gift from “Ms. Commissar Gießelmann”.

The heavy weapon was actually used for killing wild animals at close range whilst hunting. However, hunting knives were also used by soldiers.

The letters T S can be seen on the blade of the weapon.

A stamp on the barrel and inside on the lock plate identifies the rifle as a weapon of the Hanoverian troops. The term “flintlock” refers to the flint stone which produces the sparks required for ignition.

A bayonet can be attached to the flint lock infantry rifle.

Friedrich Levin Lüders was a city legal advisor from 1801-1824. In 1818 he received the title of mayor. He founded the Werkhaus together with Pastor Goldmann in 1818 in Hamelin.

Memorial plaque for the struggle against Napolon

The territorial battalion returned from France to its home garrison on 25th January 1816. The arrival of the soldiers was a great event for Hamelin. The townspeople waited in Bäckerstraße for the returning men and accompanied them in a procession-like manner to the garrison church. A church service in celebration was held there.

Finally the memorial plaque at the church was unveiled. It honours the soldiers from Hamelin who fought at Waterloo.

General Toll of the Dead, Hannover, 1817

The “General Toll of the Dead among countrymen having served with the Royal Hanoverian troops in 1813-1815” names the soldiers and officers who fell in the final battles against Napoleon.