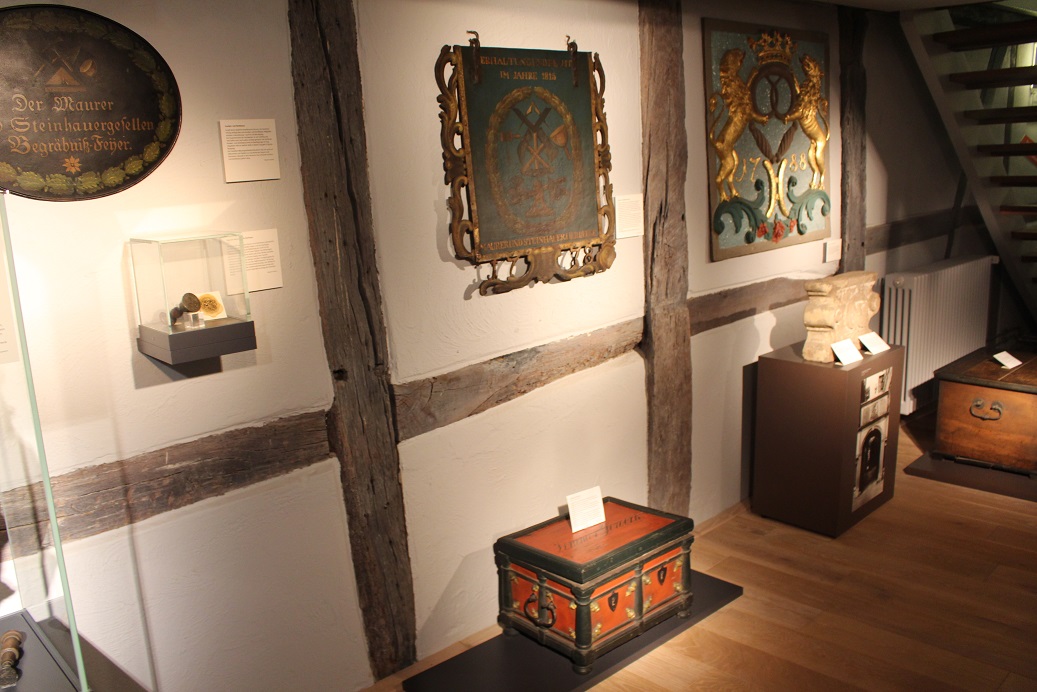 On 20th January 1765, the honourable local shoemakers’ association allowed me to view the existing correspondence in their chest. They consisted of some old bonds [debt securities] written on parchment which the municipal authorities issued to the shoemakers’ association. The sum of the bonds amounts to around 1000 guilders. The interest is partially used for shoes and linen which are distributed annually to the poor. […] Furthermore, in the chest were some documents from legal cases and the privileges of dukes, given to the shoemakers’ association, the oldest of them de anno 1512. Quite a few models of men’s and women’s shoes are also stored in the chest, the same fashions as more than 100 years ago, some of them certainly very rare.

Seal stamp of the gold and silversmiths’ association

The products of Hamelin gold and silversmiths were highly appreciated in many places outside the city.  In particular, the containers of the Hurlebusch masters impressed with their artistry and workmanship.

The gold and silversmith family can be traced in Hamelin from the 17th century.  Jobst Heinrich Hurlebusch worked as a silversmith from 1725 in Hamelin. In 1741 he applied to establish a goldsmiths’ association, of which he became the head. The seal stamp originates from the founding year of the association in 1743. It was among the first articles to be placed in Hamelin Museum: it bears the inventory number 14.

A further head of the association came from the Hurlebusch family workshop.  From 1768, Heinrich Julius Hurlebusch trained his nephew Christian Heinrich Friedrich Förster, who was later elected as head of the association.  He was responsible for the “goldsmith oath” of 1784: “You must pledge and swear an oath before God and through his Holy Word, that you shall only work with at least 12 carat silver, correctly mark and state the content of the silver on the finished work to be presented for taxation […].” 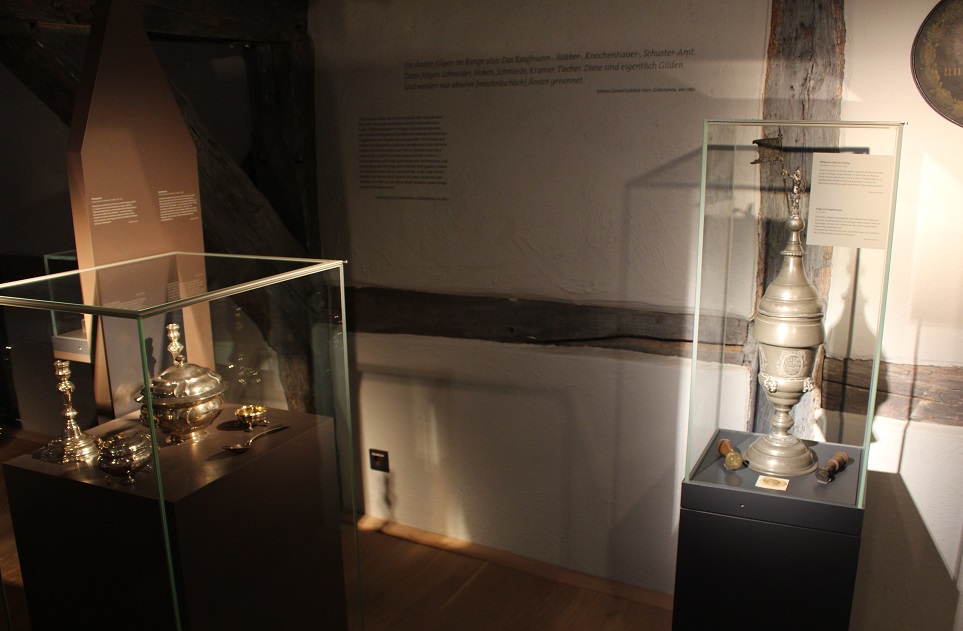 Georg Justus Hurlebusch became a master in Hamelin in 1752. In 1758, together with his brother, he was the only “official” silversmith master. These were artistically fruitful years in which the great part of his work – above all crockery – was produced. Only in the following decades did competition become stronger in the region due to numerous masters and factory goods.

The silversmiths Georg Justus and Heinrich Julius, as well as their father Jobst Heinrich Hurlebusch, worked contemporaneously for many years. Many of their silver containers from around 1750 owed their design to late Baroque style – crockery, cutlery, decorations – and found their way into the houses of the nobility and churches.  Jobst Heinrich Hurlebusch specialised in sacred work and, among other things, produced silver Eucharist goblets and wafer tins for the churches at Grohnde, Hämelschenburg, Holtensen and Kirchohsen.

Like the guild chest, the welcome goblet was among the important objects possessed by the guilds and professions. New members were offered a symbolic welcome-drink from these goblets. It served as ceremonial confirmation of acceptance into the respective guild.

The professions fulfilled public functions, e.g. the trade inspectorate within the city. So they each possessed an official seal with which they authenticated the documents they issued.

The seal of the carpenters’ association from 1777 was donated to the museum in 1900 by the master carpenter Nasse.

Solidarity among the craftspeople was very important and was thus also made visible in society. At funerals, the sign of the health insurance and burial fund was carried along in the procession. Who took what position in the funeral procession was exactly defined.

The Hamelin Stone Masonry Journeymen Families’ Association was disbanded in 1906. It handed over documents and objects to the museum relating to the history of the stonemasons and engravers. The health insurance and burial fund sign was among them.

Seal of the stonemasons and engravers

The seal of the Hamelin stonemasons and engravers highlights the importance of the guild for the city community with its upright lions and magnificent graphic segmentation. It is decorated with an array of work tools, e.g. hammer, chisel, solder, compasses, winch and trowel.

Construction workers profited from Hamelin being a fortress city. However, usually prisoners were used for work on the walls around the city. Often experienced specialist workers were required. The prosperity that gradually returned with the fortification also boosted orders from the Hamelin townspeople for the stonemasons and engravers.

Stonemasonry and engraving were construction trades. They formed their own guild or fraternity. Guilds were well-organised associations of craftspeople. Among other things, they regulated access to the city’s labour market. Those wishing to build a career as a reputable craftsperson had to become a member of the guild. A strictly standardised migration period was stipulated.

Migration led journeymen across the whole of Europe. They were well supported by an extended network: accommodation as well as work and help in case of illness were all provided. A journeyman arriving in a place announced himself at his lodgings with the ritual greeting of his trade. He could live there until he found work. Work was also arranged at the lodgings. The assemblies and festivals of the guild – e.g. emancipation celebrations – also took place here.

The lodgings sign was placed in Hamelin Museum in 1906.

Guilds that played an important economic and social role in the city were recognised in Hamelin as professions. Carpenters were among them.

Supervision of their respective trades was incumbent on the guilds. They set the number of members as well as prices and supervised working conditions, wages and the quality of manufactured products.

Each association and guild possessed a chest. It had a double function. On the one hand, it was used for the receipt of cash assets and official records of the respective association. On the other hand, the opening of the chest symbolised the beginning of the members’ meetings, at the end of which it was once again locked.

This sandstone plinth for a cast iron oven shows a pretzel in the middle. It came from the address Fischpfortenstraße 28 and was sold to the museum in 1981.

The sale of bakery goods was precisely regulated: They could only be sold in specially designated bakery shops. Each baker had their own shelf space there. In the 18th century there were up to three such shops in the city near the marketplace. One of them lay between the town hall and registry office, with the others at residential houses in the market and Osterstraße.

Coat of arms of the bakery shops (replica)

The coat of arms was placed above the bakery shop lying between the registry office and old town hall. It refers confidently to the status of the city’s bakers.

The replica was made in 1961 for a special exhibition. Then it was displayed in the registry office until it was placed in Hamelin Museum in 2006.

Important documents and seals were stored in the chest. It was kept locked – possession of the key was a privilege and the holder had to supervise and maintain the association’s archives.

The chest was ritually opened at the beginning of each meeting and at the end it was likewise ritually closed.

The bakers profited from the upturn in the city’s economy. Ever increasing numbers of people had to be fed. They were able to hold sway in disputes with competing suppliers in the region. They possessed the sole right to sell bread in Hamelin.

However, the city bakers were in the first instance only permitted to supply the local townspeople with bread. There was a separate garrison bakery for the soldiers. The bakers’ association succeeded in 1766, however, in concluding a contract with the Hanoverian military administration for bread deliveries to the garrison.