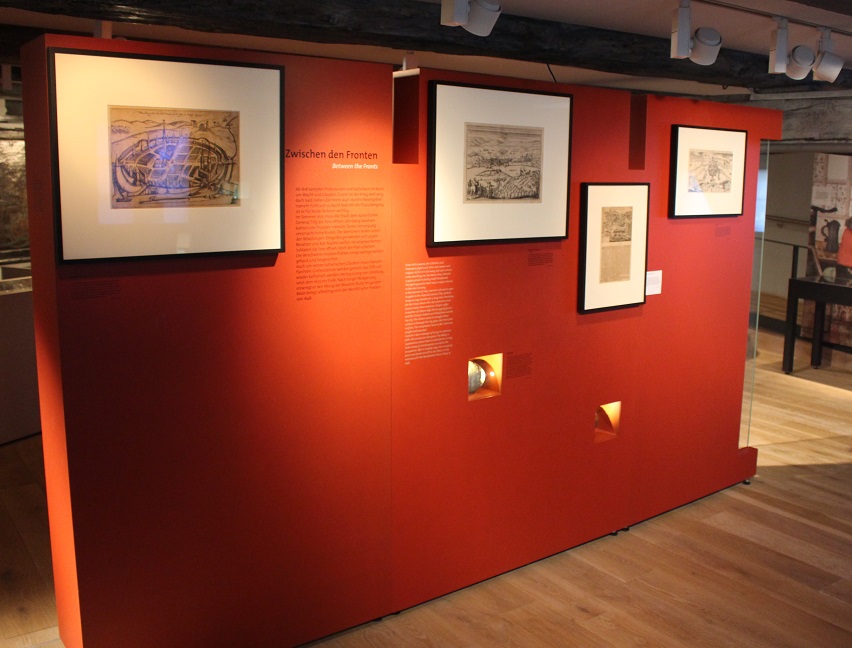 Between the fronts, © Museum Hameln

From 1618 onwards, the Catholics and Protestants fight each other over power and religion. At first it is far away, but soon armies come marching into the Weser Area. Hamelin is quite correct in feeling itself threatened.

The fighting parties both have a major interest in the river crossing.

In the summer of 1625, Hamelin is forced to open its gates to the imperial General Tilly. Catholic troops occupy Hameiln for a long time. Providing for the troops drains the city’s provisions and causes many more expenses. People suffer. A number of citizens defy the occupying forces and the Council. Soldiers are hired from outside the city. The citizens want to smuggle these soldiers in through the city gates. But their plan misfires. The conspirators have to flee. Some are caught and executed.

Hameln is also in danger of losing its Lutheran faith. All services are disrupted. The Abbey is supposed to convert back to Catholicism. In 1633, Duke Georg of Lüneburg puts an end to the occupation. After a lengthy siege, the occupying forces are forced out of the city. Peace is only restored with the Westphalian Peace Treaty of 1648.

The single-leaf print from 1622 shows the condition of the city before the war: A wall with a round tower and broad ditch is set up in front of the medieval city fortifications. A “new building” had been constructed in the inner city between 1610 and 1617 in the immediate neighbourhood of the town hall (G) and town market church (I): the later so-called registry office (H).

Siege of the city of Hamelin

We are looking over the besieged city from the Klütberg: Duke George’s siege troops have set up their encampment right around Hamelin. They fired mortars into the city. The imperial garrison defended itself from the city walls. They attempted with losses – in vain – to penetrate the siege ring. The defenders still hoped for help from an approaching imperial legion.

Battle of Oldendorf in Hessen

The single-leaf print, not without reason, calls the battle of 8th July 1633 the “Battle of Hamelin”: Following the defeat of the imperial legion by the united troops of Duke George, Knyphausen and the landgrave of Hessen, the Catholic occupation of Hamelin abandoned its resistance to the besiegers.

Siege of the city of Hamelin

The engraving shows the encampments of the Lüneburg and Swedish troops in the foreground. After the victory at Oldendorf in Hessen, Duke George and his allies immediately continued the siege. Only after the besieged learn from a captured imperial officer of the outcome of the battle were they prepared to hand over the city on 10th July 1633.

Iron balls were used by the field artillery in the Thirty Years War. They could be more exactly worked than stone balls and thus had a more precisely calculable trajectory. The balls flew flat, and first hit the ground at ca. 800 metres, bounced and flew a further 400 metres, and then again ca. 200 metres. They could therefore kill many people.  These balls were shot with a quarter cannon royal, a muzzle-loader cannon.

The old city fortifications with their vertical stone walls hardly offered any protection against the force of iron cannon balls. New walls were set up in front of the gates: made of earth and equipped with sloping sides, they were better suited to muting the destructive power of the shots.

The engraving shows the first largely realistic view of the city. The Weser Bridge is clearly recognisable, as well as the fortifications, and also mills, gardens and fields outside the town.

The city views by Merian appeared as part of a complete work, which included many cities and described them with text. Special features of each city were highlighted.

This induced conscious examination in Hamelin of the history of the city.  At the centre of the discussion is the Pied Piper legend, whose origins and content were increasingly critically questioned.

When the war also reached the Weser region, there was fear in Hamelin. The armies of King Christian IV and the Catholic General Tilly were advancing in 1625.  They forced the opening of the city gates, one shortly after the other. Not just a few feared for their freedom and property.

The hoard of coins, which workers found in 1882 during construction work in Wendenstraße, tells of this. It consists of 91 coins, mostly imperial thalers and pieces of thalers of Dutch and northern German mintage. The youngest are from 1624.

Who hid them? Was a Hamelin citizen the owner? Was it a travelling salesman or even a Danish or imperial soldier? And why did the hoard remain in his stash? Was its possessor killed or did they have to leave the city?