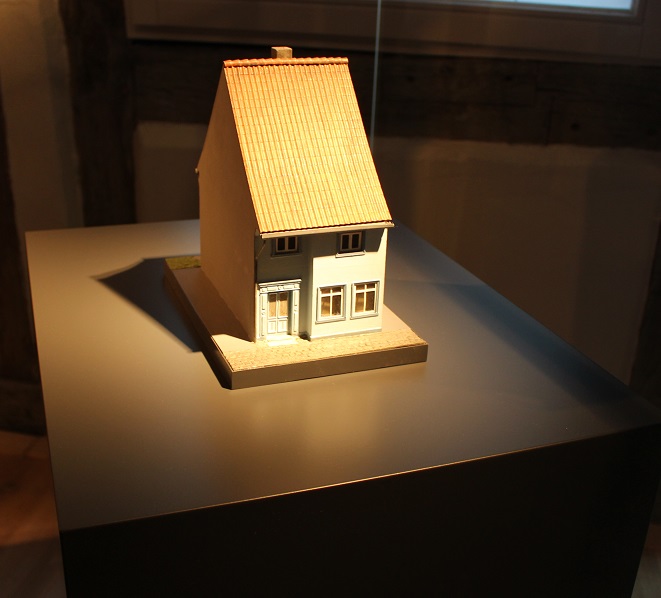 Living in the Early Modern Times

The half-timbered house dating from 1560 is a good example of a small town-house in Hamelin in the Early Modern Age. It is far more modest than the large residences of the burghers. The little house lay in a row of simple buildings in Stubenstraße, at the time occupied by small craftspeople, widows and day labourers.

In its construction, it was thoroughly oriented to the large town-houses with high hallways. It also possessed a small bow window, with the alcove so typical of opulent Renaissance buildings. However, its floor area only measured 40 square metres.

In 2006, it was professionally dismantled and stored. 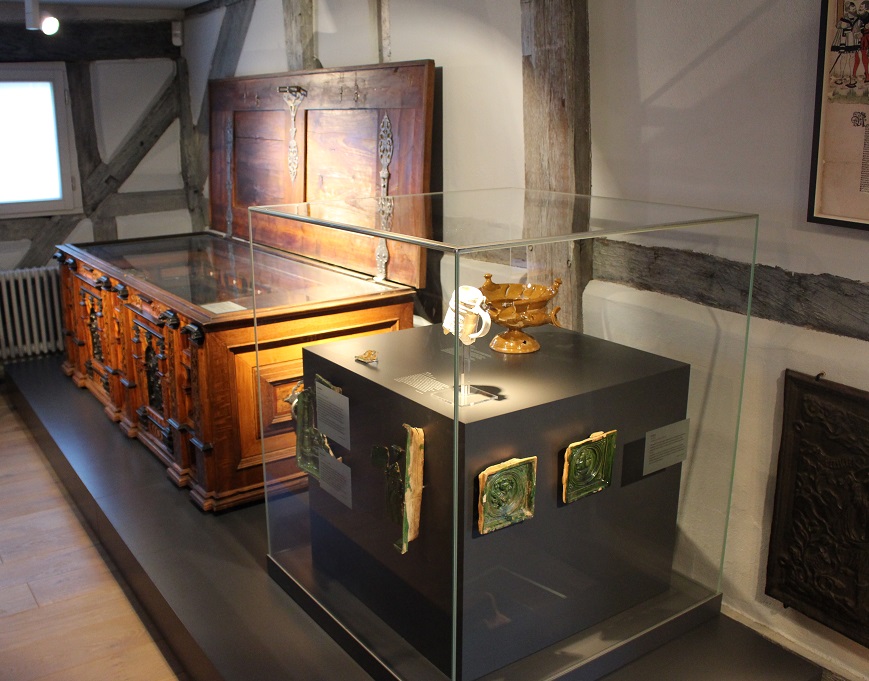 During intensive rescue excavation at the central bus station at the edge of the ECE site, this striking, yellow-glazed container was found.

Embers were poured into the lower part, and the heat could escape outwards through the small holes, mostly radiating upwards. Three brackets were mounted over the edge on which a plate could be placed. The room was thus heated and food kept warm.

The burner was portable.  The container could also be adjusted and filled with embers using the shaft handle and circular handle opposite.

The wealth of the Leisthaus owner is visible in this beer tankard [“Schnelle”]. It originates from Siegburg in the Rhineland. Especially valuable ceramic was produced there.  The fine decorative markings show the high level of craftsmanship of the Siegburg potters. They worked with moulds. The motif demonstrates that they understood the art of their time very well and quickly adapted to new trends.

It is a scene from the Biblical story of the Prodigal Son. It was only used at the inn. The picture was intended to admonish the drinkers and warn them not to make celebrating too important in their lives.

Tiles found during excavation are evidence for the presence of various tiled ovens in the Leisthaus. A number of rooms were heated, which was a great luxury during the Renaissance era.  The tiles themselves were finely worked and decorated, certainly an expensive purchase.  They adopted current motifs of their time and partially recomposed them in new ways.

The religious attitude of the architect can be ascertained from tiles with Biblical motifs. A tile fragment showing the Melanchton coat of arms is a unique speciality. A clear indication of the character of the oven as a “Reformation oven”. The householder thus demonstratively revealed his Protestant views.

The word Genesis on the tile provides a clue as to the scene represented: in Genesis 28, 11-15, the Jacob’s ladder dream is described. Jacob lies sleeping on a stone whilst above him angels climb up and down a ladder. They bring messages from God the Father to earth. God is represented like a king with a full beard and royal orb in his hand.

According to Lutheran teachings, no angels are necessary for communication between God and people. The scene nevertheless remains a fixed component of Lutheran Bible illustrations.

The female figure represented carries a hammer in the right hand and a chisel in the left hand. The dress was inspired by ancient patterns, while above the hips she wears a contemporary, tight blouse and Renaissance period chain. Above the hair-net, one can make out a hat to some degree.

A precedent for this motif has not yet been found.  Is it a representation of architecture? Is it a special design for the proud architect? 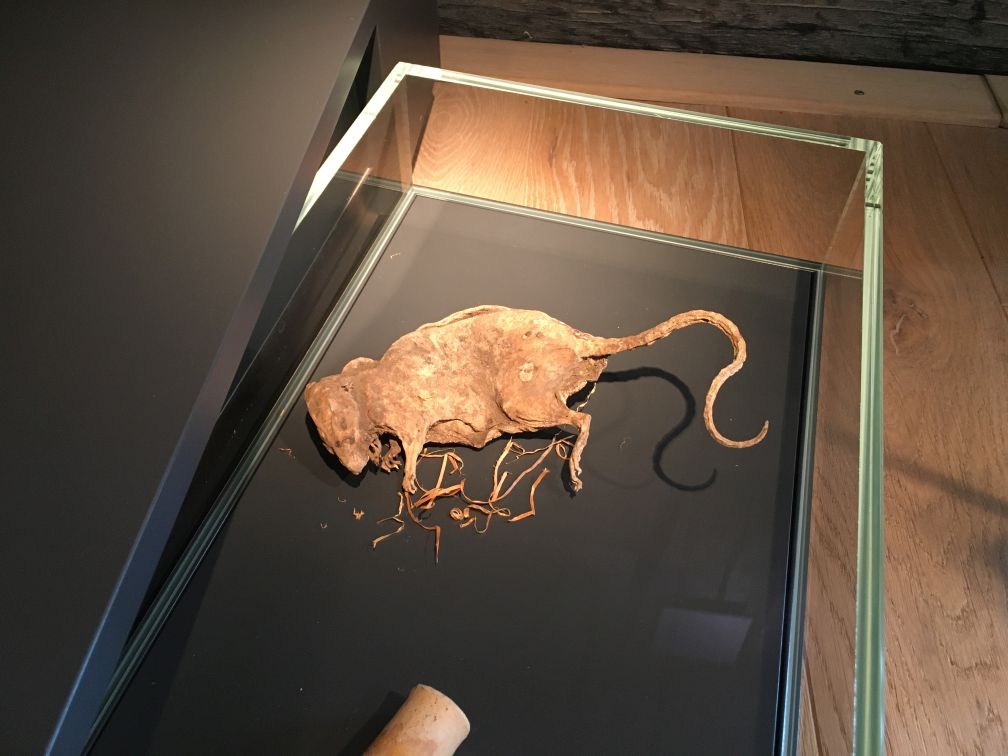 A mummified rat was found in the roof framework of the building during the dismantling. How it met its end there is unclear.

Daily life in the Early Modern Age was loud, dirty and stinking beyond the grand boulevards. The less wealthy faced a hard struggle with life’s adversities. The breaking of a pitcher could represent a great misfortune. The few vessels belonging to a family were of high value to it.

Duke Erich I of Brunswick-Lüneburg borrowed money from the von Reden family.  When he did not pay his debts, the burghers named by him refused to fulfil their contractual duties.

Now the von Reden family sent a printed defamatory letter. In it the burghers were accused of breach of an oath and deceit. The intended punishment was very clearly stated: death by the gallows or wheel. The letter was sent to the burghers and was to be understood as a threat.

If they did not pay, the letter would be publicly displayed, e.g. at the church, pillory, etc. This was a massive breach of honour which by itself usually rendered the threat effective and led to payment.

The von Reden family today occupies another aristocratic seat in Hamelin, the Redenhof.

The sacrifice of Isaak

From the second half of the 16th century, cast iron ovens were produced in series. They were usually made of five iron panels. These ovens could be quickly disassembled and rebuilt.  They were also more durable and fuel-efficient than those made of ceramic tiles.

The front plates were often elaborately decorated. Especially popular were educational Biblical themes: here the sacrifice of Isaac by Abraham. At the last moment, God intercedes and prevents Abraham from killing his own son. 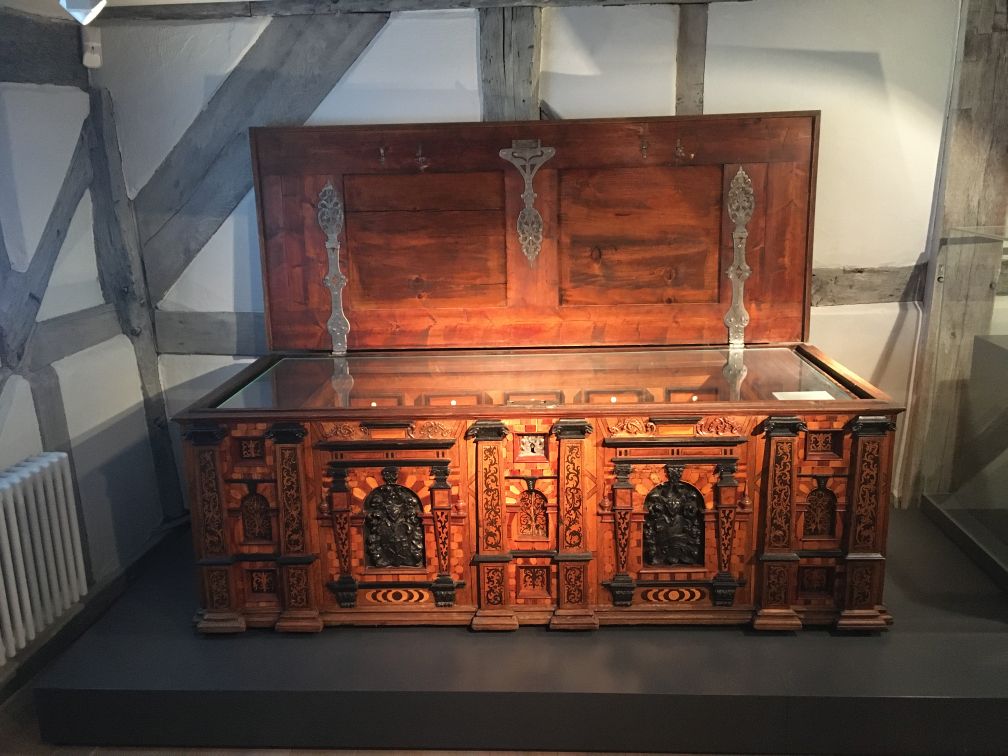 Chests were among the most important items of furniture in households in the Early Modern Age. They usually acted as storage space for household items, textiles or other valuable goods such as documents or money. A chest could furthermore be used as table or seating furniture.

The sides of the chest appear like house walls. They display popular forms and motifs from the Renaissance, such as half-columns with richly carved capitals.

The cover is not original, but is an addition from 1898 by the master carpenter Koch.