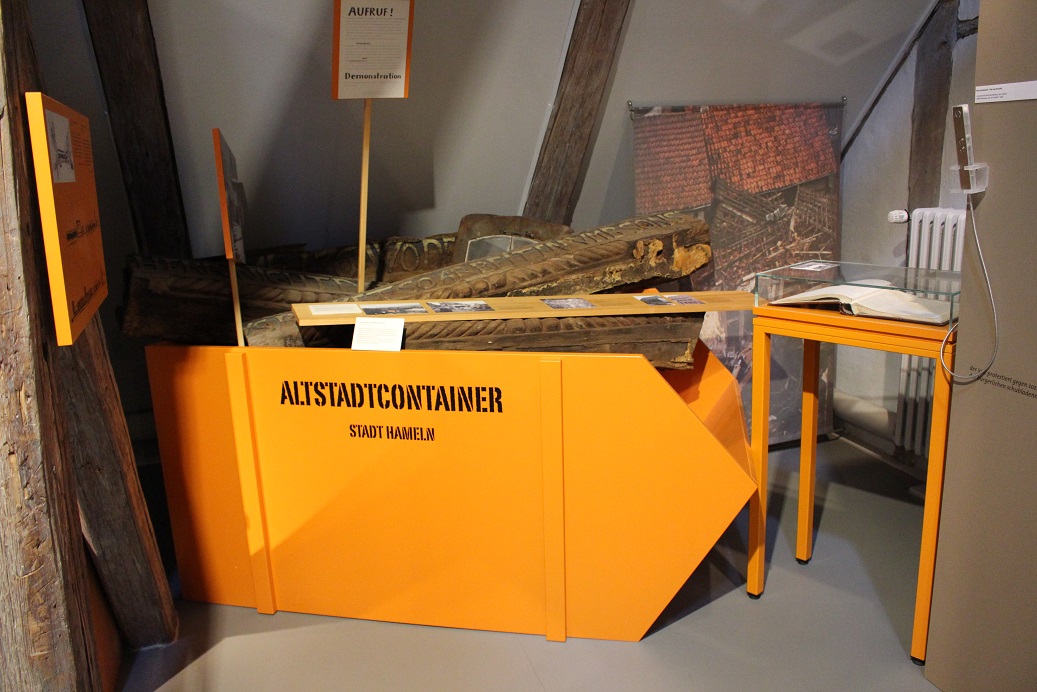 Remidiation of the old town

Planned parking bridges via the Wallstraßen

Multi-storey parking bridges – a radical intervention in the city’s image – were intended to bring people from the parking facility to the city centre via the Wallstraßen. They significantly disrupted the urban landscape. Business people feared lost sales due to the new shopping centre.  From 1971, for this reason, instead of the parking bridges a large multi-storey car park was planned in the Kleine Straße area. However, this also meant that still more houses had to be demolished.

The Weser riverbank before 1967 and after the planned redevelopment

The old town no longer met modern requirements, those responsible believed: In the north-west of the city centre, an “urban” centre with a large shopping centre, bus station and second Weser bridge was planned. Almost all of the old buildings in the area had to be demolished to make way for this. Bäckerstraße and Osterstraße were intended to become pedestrian zones, developed over outdated “service roads”.  Old buildings also had to give way here.

Opponents of the regeneration emerge

The “Association of Hamelin Citizens for the Preservation of the Old Town” was founded in January 1968. Among other things, it opposed the planned development of the inner courtyards, instead wishing to maintain them as the “green lungs” of the inner city. On 19.4.1968, the members voiced their protest when the Minister for Housing and Urban Planning, Lauritz Lauritzen, visited Hamelin.

Actually it is Psalm 127. Did the Renaissance carpenter fail to notice this mistake? Or did it result from a later revision?

Demolition of the rear building of the canon’s house

The demolition of the canon’s house built in 1558 was never on the agenda. In 1974/75, it was modernised for 2.1 million DM. The much newer extension had to yield, however, and major changes were also performed in the interior.

The city centre changed significantly during only one-and-a-half decades: In the north-west (above right), the large department store has been built, developed above the neighbouring bus station and the four-lane Thiewallbrücke. On both sides of Osterstraße gape large vacant lots: They were used as parking areas, since the new buildings were a long time coming.

The Curia of Jerusalem before and after the regeneration

A rethink in politics began in 1973: away from redevelopment and towards the improved maintenance of older buildings. Planned interventions were significantly reduced in the planning concept of 1975. The Curia of Jerusalem built in 1500 was thus preserved.  For many similar buildings in need of renovation, the change came too late, however. They had already been the victims of the construction site equipment.

The fate of the last fisherman’s houses

Seven of the so-called fisherman’s houses were still standing when the department store was built. They mostly originated from the Renaissance, and some were dilapidated. According to the moderate regeneration concept which applied from 1975, they should have been demolished. Elsa Buchwitz, the chairperson of the “Association of Hamelin Citizens for the Preservation of the Old Town”, gathered a petition against this and displayed the converted photo album in the museum cafe. When more than 1,300 people had signed the petition, the innkeeper Eckart Baß presented it to the city council.

The protest was unsuccessful in the long-term, however. In January 2006, the last fisherman’s house, from which the window came, was demolished to build a large shopping centre.

Demolition of a rear building