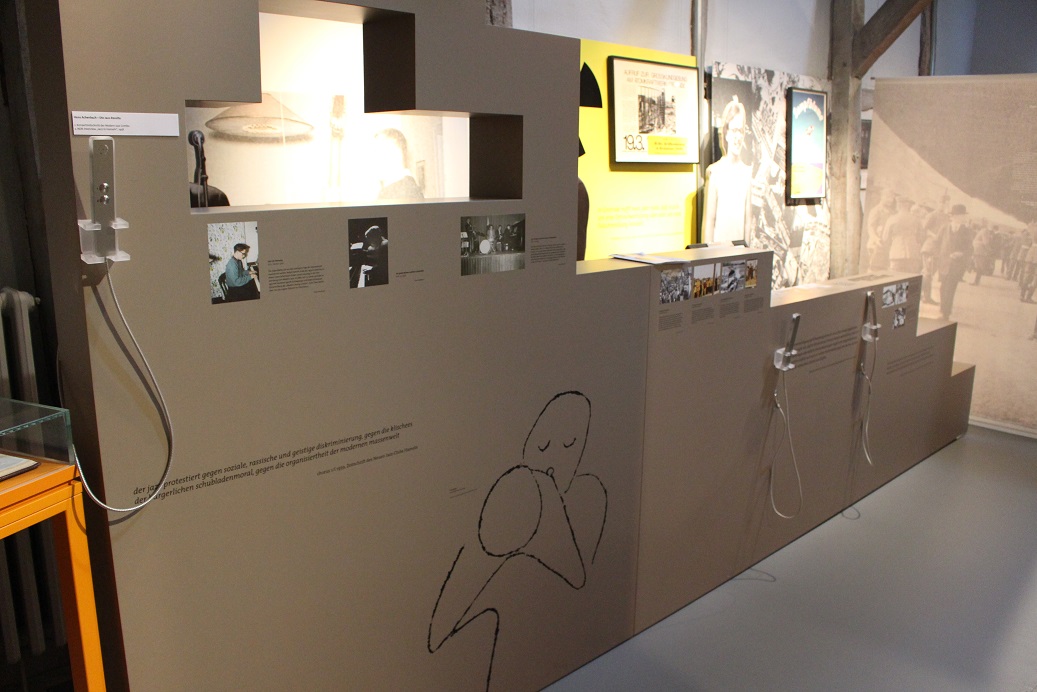 Jazz as an escape

For young people wishing to break out of the suburban boredom of the Adenauer period, Hamelin offered very little at the end of the 1950s. Hans Achenbach found his escape by turning to modern jazz. He founded the “Modern Swing Combo” in 1957 at the age of 15 with Hartmut Specht (drums) and Heiko Eichenauer (guitar/bass). He only had his bedroom in his parents’ house for rehearsing.

The big stage: Gig in Bielefeld

Jazz interlude in the large saloon of the rock cellar

The “Modern Swing Combo” (with H. H. Lübbers/bass) received a welcome opportunity to present itself at the ball at the end of the dance class. While other young people and the local press were thoroughly well-disposed towards the Jazz players, with later concerts the city of Hamelin was only interested in whether entertainment tax had to be paid. Entertainment? No, for the musicians jazz was pure art – and also social critique.

Jazz was a protest against social, racial and psychological discrimination, against the cliches of bourgeois compartmentalised morality, against the organisation of the mass modern world

Evacuation plan for the city of Hamelin

The brochure, “What to do in an emergency?” was distributed to all households. The district of Hamelin-Pyrmont informed the population of disaster response measures in case of an atomic accident at the atomic power station in Grohnde. However improbable the risk was: Each inhabitant of the city should know in which of the five evacuation zones they lived and in which direction the evacuation would take place.

Many citizens’ initiatives against the construction of the atomic power station at Grohnde were formed in the Weser Hills. Leftist, alternative, but also thoroughly conservative people who saw their lives and homeland as being threatened by a possible atomic accident engaged with them. All were united by the motto, “No atomic power station in Grohnde and also nowhere else,” which also marked the mass rally in Kirchohsen on 19.3.1977.

Protest march to the construction site

Well-organised demonstrators take the lead of the protest march. They are wearing yellow rain jackets, called “oilskin jackets”, helmets and goggles as protection against water cannon and tear gas. With arms firmly linked together they are escorting minibuses with loudspeakers and tools to the construction site: Confrontations with the police are only a question of time.

Confrontations at the site fence

Demonstrators are attempting to tear down the site fence, while water cannons are intended to stop them. Later the police assembled outside the site and forced the demonstrators away. There were fights involving slingshots, stone-throwing, incendiary devices, tear gas, truncheons and mounted police. There were almost 500 wounded on both sides according to official statements.

Demonstrators at the site fence

The conflict is fundamental: In addition to peaceful demonstrators there were many participating in the protest against atomic power stations who were leading the struggle against the Federal Republic “system”, which was hated by them. Damage to property such as here to the site fence – and throwing stones at people – is a part of this.  They are faced by police who have orders to maintain the public order against “troublemakers” in this very same Federal Republic.

Anti-atomic village on the construction site

After the “Battle of Grohnde”, the forms of protest changed, with non-violence becoming the basic principle. Members of the citizens’ initiative are occupying the site where the cooling towers are to be built on 13.6.1977. They have set up an anti-atomic village with a central “friendship house”. It is open to all who are interested in informing themselves about the protests against the atomic power station.

The meeting of two worlds?

Police eviction of the anti-atomic village

The eviction of the anti-atomic village took place after only two months, in the early hours of 23.8.1977. In the shortest time, the inhabitants packed their things and left the site, without it coming to clashes. Later a court established that the eviction in this form was unlawful. What use was this to the opponents of atomic power, however? The construction of the atomic power station continued.

The atomic power station in operation

The large protests in 1977 did not prevent the Grohnde atomic power station from going ahead. Local anti-atomic groups continued to warn of the risks. The further the construction progressed, the lower the level of interest among the broad public: The launch, the first nuclear reaction in the reactor on 1.9.1984, only received a small article in the Dewezet.

To commemorate the topping out ceremony of the reactor building on 20.10.1980, the construction workers who participated in the building of the Grohnde atomic power station received a wooden platter from the power station association (KWG). They performed, whereas the opponents of atomic power demonstrated. There was no direct contact between the building workers and demonstrators during the whole period of construction.

In Grohnde, it is still hoped that there has been a confusion of locations or hoax.

Dewezet, 19.1.1973, on the first rumours of the construction of an atomic power station

Taking into consideration the range of variation of the parameters included in the calculation, it can be seen that in the case of the Grohnde-Hameln wind direction, acute radiation exposure is possible during an accident in all weather conditions.   In the long-term, even moderate accidents could still cause radiation exposure after 100 years, which would exclude the use of the contaminated areas. 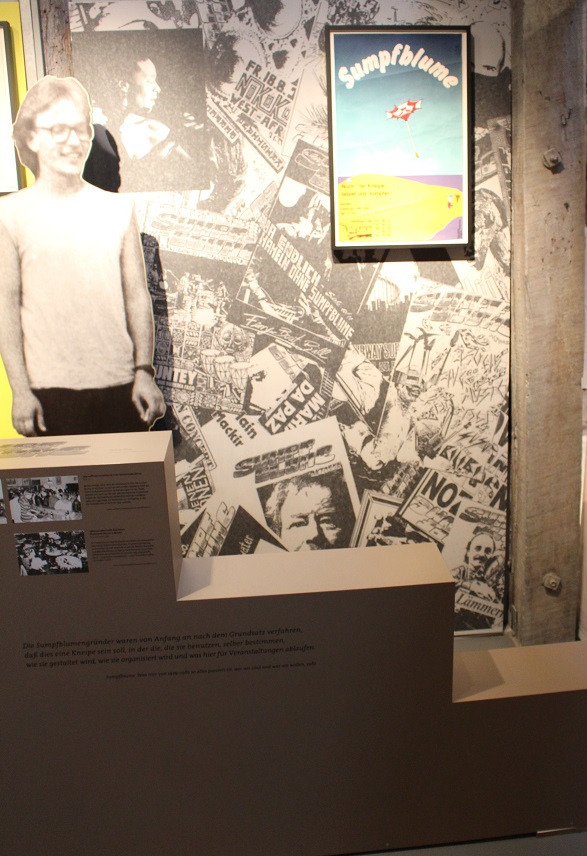 It became clear only a few years after its establishment: The Sumpfblume with its ca. 200 square metres was much too small. The communications centre had negotiated with the city for years, and it was also interested in the prison which was south of the cathedral and had stood empty since 1980. Finally the district made a warehouse on the Weser riverbank available in 1989, into which the Sumpfblume moved in the summer of 1991.

Each counter team working as volunteers scheduled a counter plenum for one week.  The main Sumpfblume Plenum, in which up to 50 people participated according to theme, discussed programme planning and other themes around every four weeks. It was ended in the summer of 1982 since it – original Sumpfblume soundtrack – ran the risk of becoming a “theoretician’s meeting”.

The founders of the Sumpfblume proceeded from the outset on the principle that this should be a pub where those who use it determine themselves how it is designed, organised and what type of events take place here.