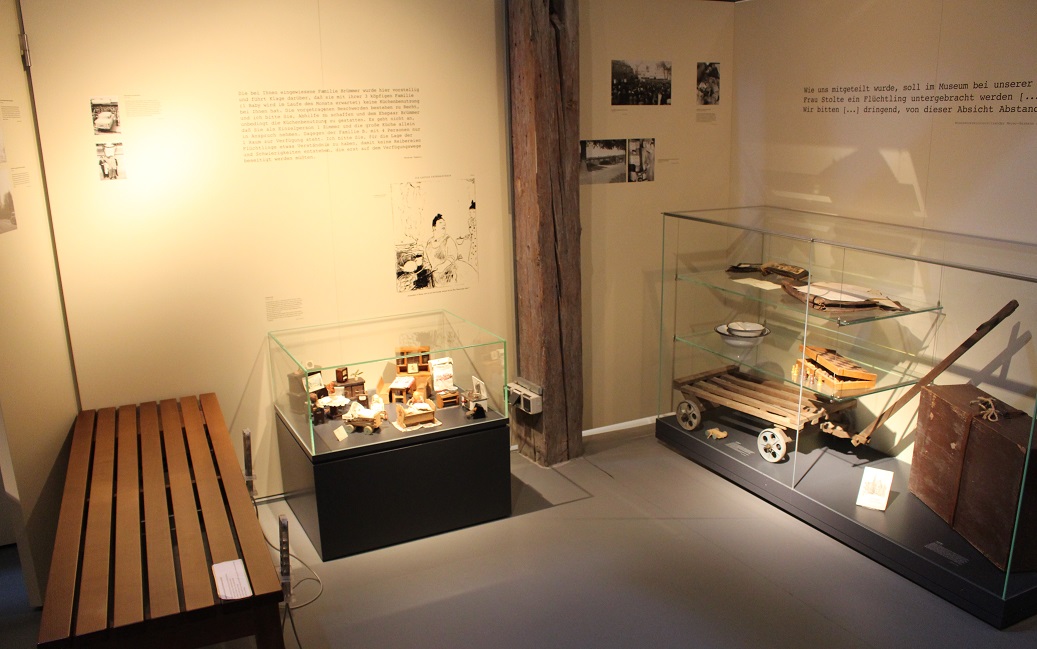 Refugees and displaced persons received special identification, which was indispensable for many applications and further assistance – possibly for the granting of credit. The status “A” identifies Maria Breitkopf, born in Kittelwitz/Leobschütz district, as a displaced person.

Further groups are the “displaced persons” from areas outside of Germany (B) and refugees from the Soviet zone or GDR (C).

The Nimsch family left their farm in Groß Peterwitz/Schlesien three times.  In January 1945, they fled from the Red Army, in July 1945 they were pursued by Polish militiamen and in 1946, they were forcibly resettled in Hamelin. They always kept the briefcase with them containing important documents and keepsakes, e.g. photo albums, insurance policies and bank documents. The latter later became important when the family was compensated with money for the lost farm.

Mr B. played chess, using the chess set he had made in Russian captivity, not only with fellow prisoners, but also with the guards – from regular soldiers to the officer of the watch. His talent for craftwork was quickly recognised and he was able to work in the camp workshop and pursue his occupation as a carpenter. Mr B. was certain that his profession saved his life whilst imprisoned.

The Hoffman family took their enamel dishes with them when leaving Weicherau/Schlesien. Though the luggage was looted on the way to the railway station, they retained them. The crockery was used for many more years in the room that was assigned to the family in the flat of a dentist in Hamelin and was a lasting reminder of home and displacement.

The family of Ingrid E., born in 1937, were well prepared when they were forced to leave Breslau at Pentecost 1946 by train in a westerly direction. Valuable possessions were sewn into clothing and dolls, rolled up bed covers were firmly tied to the small cart.

Some things had to be left behind at the railway station: Each person was only allowed to take around 20 kg of luggage with them.

Hamelin also took in thousands of released German prisoners of war.  For many, however, there was no return to the familiar homeland: Mr B. was interned in the Soviet Oritschi camp at Kirow in 1945. As a skilled carpenter, he worked in a workshop there and made a wooden case in 1947 for the journey home. This led him in 1949, including diversions, to Hamelin, since he was not allowed not return to his homeland in Silesia.

Displaced persons and refugees were initially moved quickly from group accommodation into private residences. However, by the summer of 1946, many new arrivals in Hamelin were accommodated for longer periods of time in the production halls of DOMAG – this meant: a complete lack of privacy. The camp was only closed at the end of 1952, when the situation on the housing market slowly eased.

Gathering of displaced persons at the market

Makeshift lodgings: External view – here at the pump station – and “church” at the wooden barracks

Eight-year-old Ingrid E. from Breslau reached Hamelin with her family by rail transport in May 1946. The uncle joined them in 1947, after being a prisoner of war. Only recently arrived in Hamelin, he began to build a doll’s house for his niece. The furniture was intended to remind her of furnishings left behind in Silesia. The birthday present was the nicest the girl had ever received.

The doll family reflected what was the reality for many families in the aftermath of the war: There is a mother, children and even a servant maid, but no doll father.

Especially in 1946, the transports brought the inhabitants of entire villages to Hamelin from areas east of the Oder and Neiße Rivers. Making contact with old acquaintances, who shared their stories, was nevertheless made very easy. The inhabitants of the district of Neumarkt in Silesia held their meetings in Hamelin from 1954. In addition to celebrations in a festive tent, the people met according to place of origin at Hamelin inns: in 1958 in the “Bremen Keys”, the displaced persons from Jenkwitz, Tschammendorf and Jerschendorf.

The city was bursting at the seams and the coercive management could not last forever. Only the construction of quite new city districts could help, such that the city already envisaged large new building areas in 1947, which are marked with “W” on the map. Their realisation took some time, however, since the construction of residential buildings only began to be in full swing from 1949.

Many displaced persons who came to Hamelin in the first years after the war were Catholic. The old church of the Catholic community at the Ostertorwall, which was relatively small before the war, was hopelessly overfilled. It quickly became clear: A new church had to be built. The new St. Augustine’s Church was built in Lohstraße and was opened in 1954 by the Bishop Hildesheim.

We have been informed by our solicitor Mrs Stolte that a refugee is to be accommodated at the museum […]. We urgently request […] you to refrain from this intention.

Head of the Museum Society Meyer-Hermann to the Hamelin Housing Office, 6.6.1946

The Brümmer family introduced to you has presented itself here and complained that with their 3-person family (a baby is expected during this month) they have no access to a kitchen at your residence. The complaints are made rightly, and I request you to find a remedy and permit the Brümmer couple the use of a kitchen. It is not appropriate for you as a single person to have sole use of 1 room and the large kitchen. By contrast family B. with 4 persons only has 1 room. I ask you to show understanding for the situation of the refugees, so that no friction and difficulties arise which would need to be resolved by ordinance.