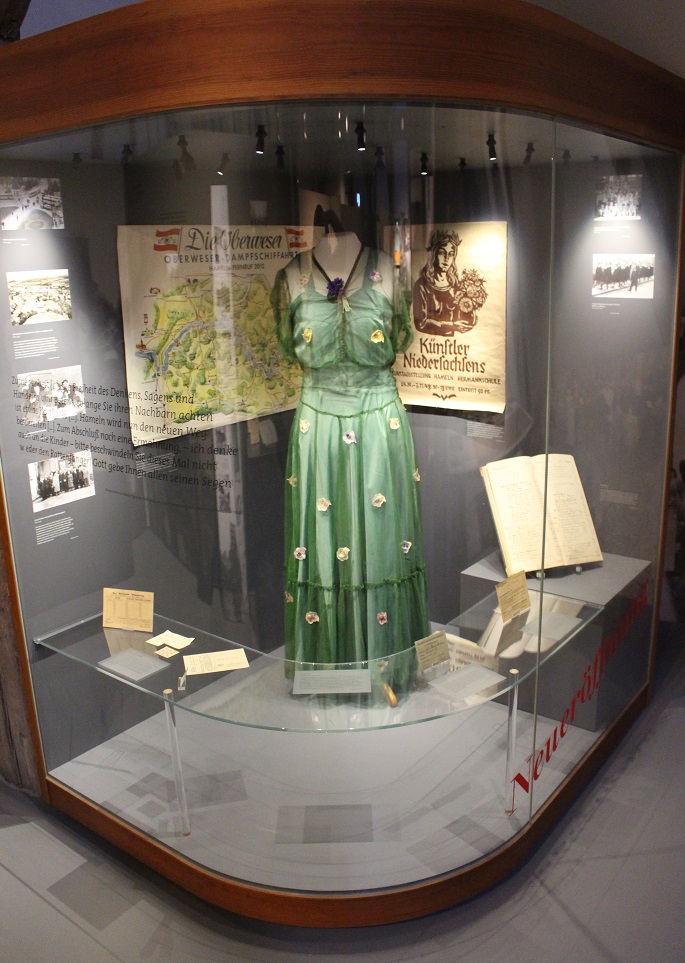 A house of art and culture – the Weser Hills Hall

In 1951, the council decided to establish a festival hall with the most modern architecture for cultural events. Bitter disputes erupted: Could Hamelin afford it? Weren’t residential buildings more important? The Weser Hills Hall was nevertheless built and opened in 1953. To its left one can see the administration building of BHW (today the town hall) built in 1955, and in the foreground the stadium (today Bürgergarten).

It was intended that the German people should contribute to their future.  City commander Major Lyndon-Bell put together a city council of representatives of churches, trade unions, business and political parties.  The photograph was presumably taken at the inauguration on 1.12.1945 (front row centre Lord Mayor Walter Harms, with Rosa Helfers behind). The citizens were called to the first elections of the city council in October 1946.

The times of privation after the war were slowly overcome, and the economic upturn began – time for the people to think of leisure and holidays again. Not distant lands, but German holiday regions were still the destination, however. The tourists represented a profitable business opportunity for the Upper Weser steamships – cars were a rare luxury.

A fresh start and reconstruction especially applied to cultural life – intensively promoted by the British. The Boys Youth Choir and “Hamelin Homeland Theatre” were re-founded or newly founded in 1945. In October 1946, the first exhibition of works by Hamelin artists took place, and in 1948, a state art exhibition of the “Association of Visual Artists” followed at the Hermann school.

School as a provisional arrangement: Class 4c at Ostertorwall school, accommodated in the Schiller Grammar School

It had already happened several times during the lifetimes of adult Hamelin citizens: Almost everything necessary for survival was rationed. There were protests and strikes in the city due to low rationing quantities. Those who “foraged” in the environs or bartered on the black market were also not spared from hunger. The situation improved with the currency reform of 1948, but many were also dependent on food handouts after the founding of the Federal Republic.

Despite the ever-present shortages, Anni Dädlow wanted to be equipped for festive occasions after the ending of the war. A seamstress from Coppenbrügge, she is sewing together what was a plain but chic dress for her. However, improvisation was required with the material: Anni Dädlow reused existing material and scavenged nets that the German soldiers had worn on their helmets in Africa. The dress and overdress were thus created.  The flowers are only added decades later for a costume festival.

New values such as tolerance and democracy had to be implanted in people’s heads in place of National Socialist ideology. The education of adults was thus of the highest importance. Courses at Hamelin adult education centre began in May 1946. It experienced a real boom when, in the summer of 1949, the fees for almost all courses were abolished.

During the Second World War, prisoners of war were accommodated under horrendous conditions in the factory building of the bracket manufacturer Adolf Pieper – the business was closed down as “unimportant for the war effort”. Workers began the renovation of the halls shortly after the end of the war. The production of brackets could only be resumed in 1946.

In February 1947, Anna Lange received a polling card for the regional parliament elections in the newly founded Lower Saxony. The citizens of Hamelin were called upon to elect their city council in October 1946. Democratic duties that the people had grown unaccustomed to, since the last free elections had taken place in 1932. The election day was also symbolic: 20th April, Adolf Hitler’s birthday, was ceremonially celebrated in the “Third Reich”.

Democratic freedom is the only way to true satisfaction […]. The freedom of thought, expression and action and prayer, so long as one does not harm others, are precious things […]. Hamelin will now follow a new path […].

Finally another exhortation – I am also thinking of the children – please do not cheat the Pied Piper again this time! God bless you.

Speech by Major Lyndon-Bell at the investiture of the new city council, 1.12.1945