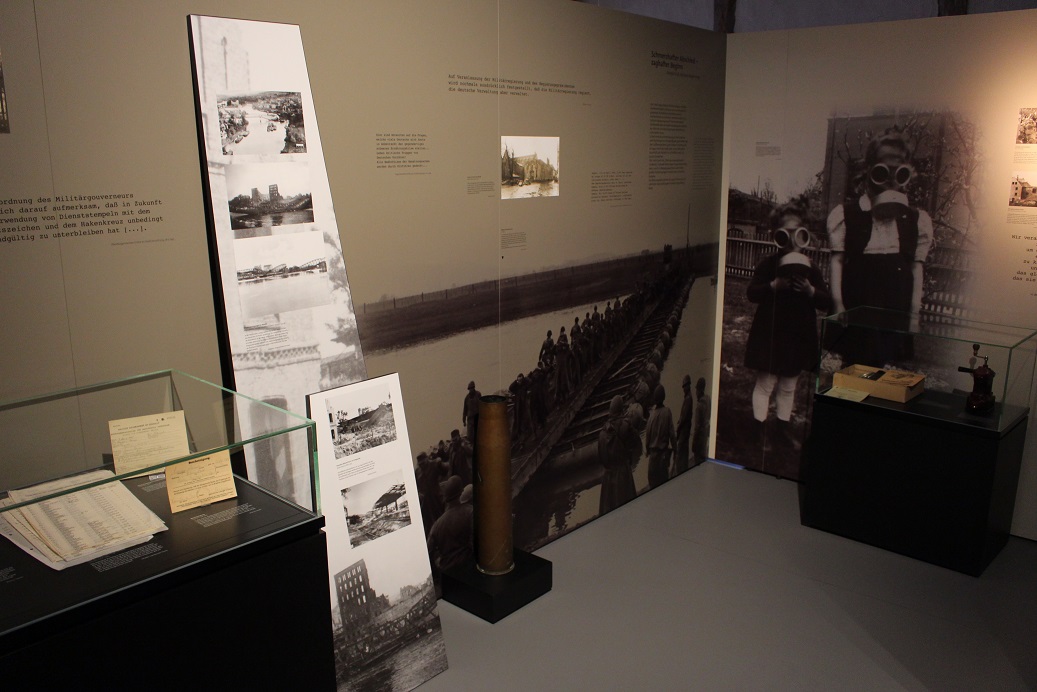 End of the War, © Museum Hameln

End of the War

The market church and town hall were destroyed shortly before the end of the war. Lord Mayor Walter Harm, appointed in June 1945, thus meant it literally when he wrote to Carl Müller, living in Lübeck – both driven out of their positions in 1933 – in July 1945 of “the wreckage of our previous city administration”.

A week after crossing the Rhine, the Allied troops reached the Weser. At the beginning of April 1945, in front of the house of August Rabe from Haverbeck, who sought protection in the cellar with his family, an American tank was positioned and fired at the east bank of the Weser. After the capture of Hamelin, the tank withdrew, leaving behind the cases of fired ammunition.

Wilhelm Rösemeier donated the souvenir to the museum in 2010.

Ending of the war and captivity: German soldiers are led over the Weser

Hamelin railway station shortly before the ending of the war

The Allies bombed Hamelin on 14.3.1945 to disable the railway station as an important transport node. The price was terribly high: Over 200 people were killed – most of them on the platforms or in nearby buildings.

Blowing up of Hamelin bridges

During the night of 5.4.1945, both Weser bridges were blown up by German units; an attempt, in vain, to halt the Americans at the Weser. On the same day, they constructed a pontoon bridge south of the city. After the end of the war, a pedestrian footbridge was built along the bridge ruins and later a temporary bridge for street traffic.

Whoever wished to travel across the state after the end of the war required the approval of the military authorities. A Hamelin citizen forged permits using a home-made stamp, into which the numbers of various military units could be inserted. From the summer of 1945, as a precaution he no longer used the stamp: The turmoil of the first months had passed and the military administration was noticeably better organised.

Hamelin prison continued to serve law enforcement after the ending of the war.  It gained sad notoriety through the ca. 200 death sentences that the British carried out here until 1949. The exact number can no longer be determined, as the list was also compiled subsequently.  It began with the condemned in the Bergen-Belsen trial, observed worldwide, who were executed on 13.12.1945.

In the first months after the war, the administration initially had to gain an overview to be able to organise the provision of supplies for the population, accommodation of refugees and reconstruction. Anna Lange also filled in an employment office questionnaire on “work planning” in September 1945, since only then would she receive food coupons.

The Allies set up offices at the registry office on 8.4.1945. The disarming of the Germans was one of the first objectives. Martin Lange arrived one day later and handed over a total of ten weapons – hunting rifles and pistols – and two bayonets.

Hamelin, 9th 10.00 flags of United Nations hoisted on town hall. Proclamations & ordinances given out. Much looting & disorder in the town

Here are answers to the questions many Germans are asking today about the present severe food shortage crisis […]. Are British troops living from German provisions?

All requirements of the occupying army are met through imports.

Supporting argument on the food situation, around 1946