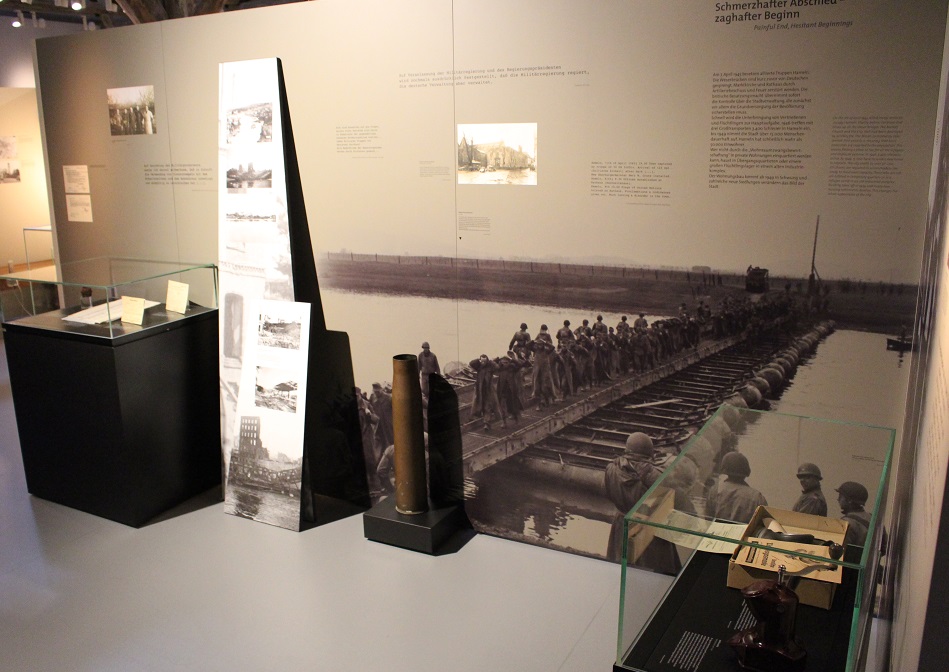 On the 7th of April 1945, allied troops arrive to occupy Hameln. Shortly before, Germans had blows up all the Weser bridges. The Market Church and the City Hall had been destroyed by artillery file.

The British immediately take control. First priority is ensuring that basic necessities are supplied to the population. This means finding a place to live for all the refugees and displaced persons.

All citizens are required to accommodate the needy to maximum capacity.  Those who are left are billeted in temporary quarters or in a refugee camp in an old industrial complex. Building takes off in 1949 and many new housing settlements develop. This changes the whole appearance of the city.

The father photographed his children Edelgard and Bärbel, three and seven years old, in the garden at home in Afferde. There – luckily not during an emergency – their “people’s gas masks” are being used. In the aftermath of the war there was initially no more private photography: Billeted American soldiers confiscated the camera in 1945.

When the German army invaded Poland on 1.9.1939 and the Second World War began, “lightning speed” victories followed. The Hamelin Wehrmacht regiment No. 74 is parading through the city on 28.9.1940: The flush of victory, France has been defeated, and the ignominy of the First World War seems to have been blotted out!  This war was different, however: The Third Reich conducted a racial war, and the aim was subjugation and extermination.

Wounded on a field

The numbers of casualties increased dramatically with the attack on the Soviet Union in 1941, including among the German soldiers. The wounded were brought by train to Hamelin. Their numbers were clearly so great that they could not all immediately be accommodated in military hospitals and the stretchers of these soldiers have initially been placed in a field.

The homeland as a war front

Air raid attacks carried the war deep into enemy territory. Hamelin, mostly only flown over by bombers heading eastwards, experienced this directly for the first time on the night of 17th to 18th June 1941. 24 people died in Walthausenstraße and Stüvestraße. The regime commemorated them three days later at the Lüttgen Markt as war “heroes”.

We bid farewell to [the dead] by once more rallying around the Führer and vowing to him to fight to the last and if necessary to make the same sacrifice as they have made for us.

District leader Hartmann Lauterbacher in his eulogy to bombing victims, 21.6.1941

It was already clear in the 1930s that a “modern” war would bring bombing attacks on the civilian population. When Margarete Matthias trained as a civilian air defence assistant in 1941, these attacks had long been a reality.

Since the dropping of chemical warfare agents was feared, until the end of the war over 40 million “people’s gas masks” were distributed among the population. This one belonged to Heinz M. from Holtensen.

When the bombing attacks on Dortmund became increasingly deadly in 1943, Gisela R. was taken in by her uncle and aunt in Hamelin. She now lived without her parents and siblings in an unfamiliar city. She took the attractive grinder with her as a reminder of her family far away in the Ruhr region. It went with her for comfort into the cellar in Hamelin during each air raid alert.

When her family’s home in Dortmund was bombed, her mother and siblings travelled with almost nothing to Hamelin to stay with the relatives. The R. family remained in Hamelin after the end of the war.