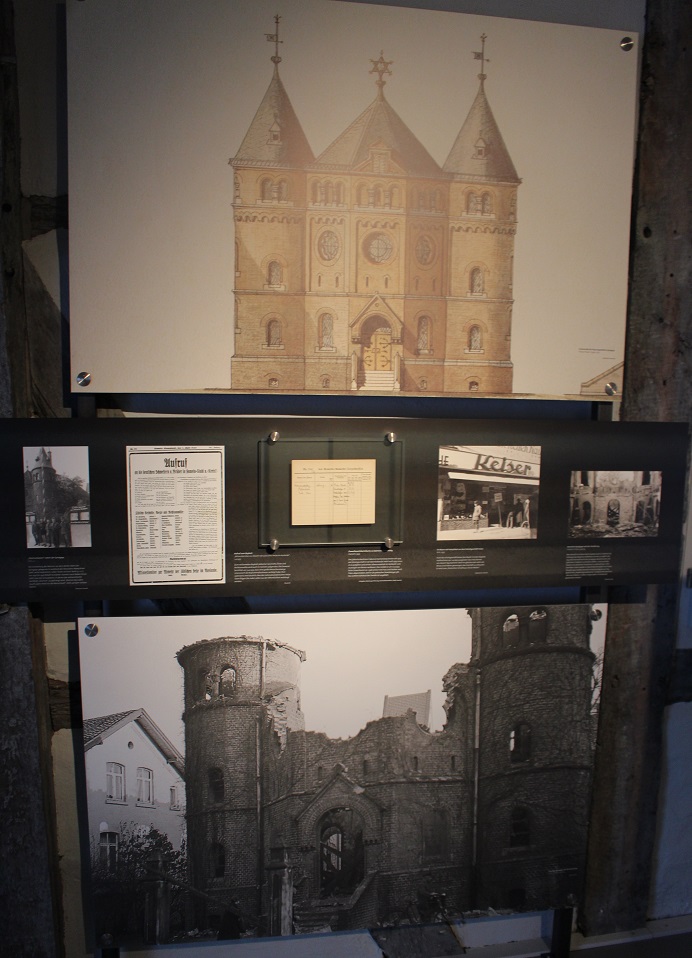 Front view of the synagogue opened in 1879

“Stürmer boxes” near the synagogue

The positioning of the men in front of the premises of the German Workers’ Front (DAF), located directly next to the synagogue, appears threatening. Among them is Erich Teich (2nd from right), NSDAP district leader in rural Hamelin from 1932 to 1935. Next to them, one can see display cases for the anti-Semitic agitation leaflet “Stürmer”. “If you break the power of the Jews, then you will liberate humanity!” reads the right-hand box.

The Keiser shoe shop (1 Market Square) was subject to the boycott measures on 1.4.1933. The photo may have originated from this day. Moses Louis Keiser saw no alternative but to sell the business in that same year: It became the “Müller German Shoe Store”.

As everywhere else in the Third Reich, supporters of the regime were mobilised in Hamelin to burn down the local synagogue as part of the so-called Reichskristallnacht on 9.11.1938, destroy the Jewish cemetery and demolish residential and business properties of Jewish inhabitants. Ten Jews from Hamelin were arrested and taken to the concentration camp at Buchenwald. The Dewezet, an adherent of National Socialist principles, called the pogrom a “retaliatory measure” on the same day and reported laconically: “According to reports, a number of Jews have been taken into protective custody.” 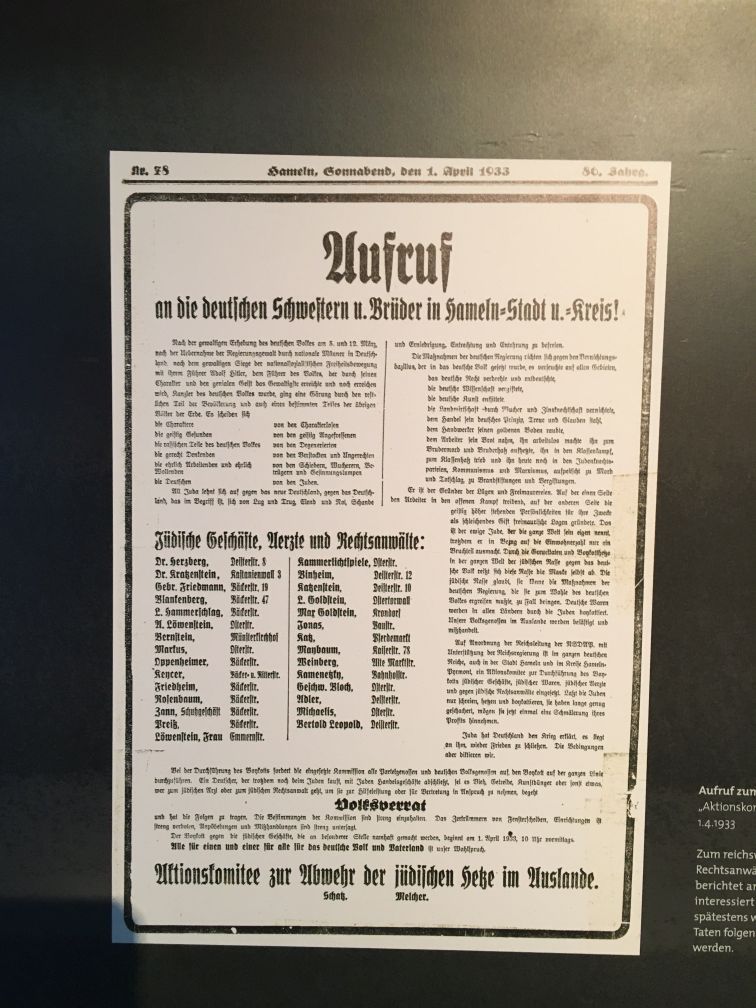 The call to observe the boycott of Jewish businesses, doctors and lawyers across the Reich was also made in Hamelin. On 3.4.1933, the Dewezet reported that a large number of people interested in the boycott measures had observed them. It was no later than at this time that it became clear that action would follow the National Socialist agitation: Jews were to be driven out of public life. 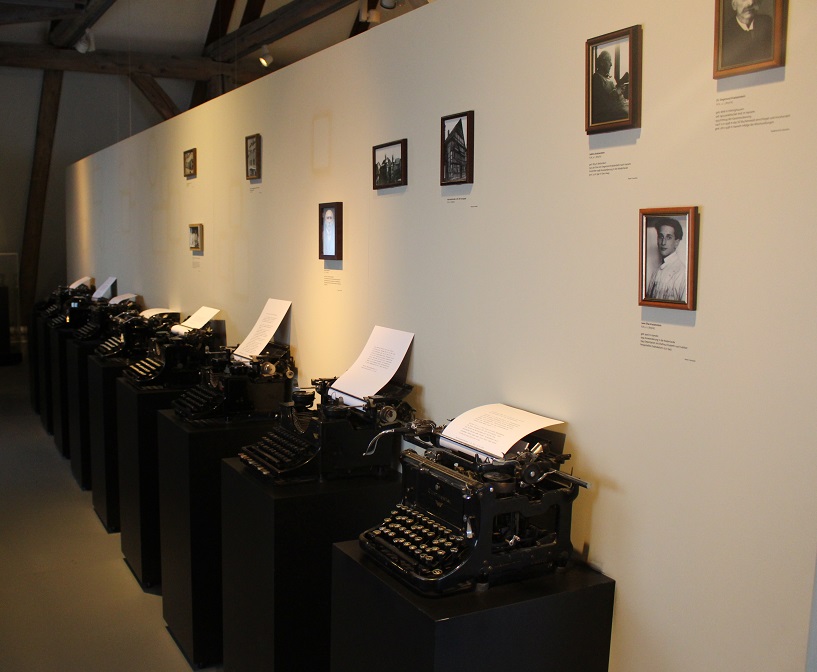 Persecution of Jews in Hamelin – Photowall and typewriters, © Museum Hameln

N.N., undated (replica)
born in 1876 in Höringhausen
from 1903 practising doctor in Hamelin
1933 withdrawal of health insurance licence
after 11.11.1938 taken to Buchenwald concentration camp and mistreated
died on 28.11.1938 in Hamelin as a result of mistreatment

Shoe and confectionery shop of Albert Löwenstein in Emmernstraße 14

Article II […] Non-Aryan origin is no obstacle to admission if the doctors participated in the Great War on the side of the German Empire or its Allies or if their fathers or sons were killed in the Great War.

The Jewish community has proceeded very cautiously since the temporary arrest on 6.8.1935 of the Jew Heinz Rosenbaum, born on 30th March 1915 […]. Rosenbaum tore down a poster put up by the Hamelin district leadership, ‘German nation be vigilant!’ and took it home with him. Rosenbaum was sentenced by Hamelin District Court to imprisonment of 1 month for wilful damage to property.

Negotiations over the takeover by Aryan business people of a number of firms still in Jewish hands are progressing. In the foreseeable future there will be no more businesses in Hamelin run by Jews.

§ 5 (1) A Jew is defined as someone with at least three fully Jewish grandparents by race. […]

(2) A Jew is also defined as a mixed-race person with two fully Jewish grandparents,

a) who at the time of enactment of the law belongs to the Jewish religious community or is later accepted to it,

b) who at the time of enactment of the law was married to a Jew or later marries a Jew,

c) who originates in the meaning of Section 1 from a marriage to a Jew which took place after the Law for the Protection of German Blood and Honour of 15th September 1935 […] came into effect,

d) who originates from extra-marital relations with a Jew in the meaning of Section 1 and was born extra-maritally after 31st July 1936.

The departure of Jews continues. Since our coming to power the number of community members has fallen from 135 to 95. The Jewish community falls into difficulties as a result since the wealthy Jews leave first. The community is already today no longer in the position to provide a Jewish teacher. This person already resigned on 1.4.36.

A list of Jewish children removed from the schools with information on the parental address will be presented to me by 1.12.38.

Police directive on the identification of Jews

§ 1 (1) Jews […] who have completed their sixth year of life are forbidden to appear in public without a Yellow star.

(2) The Yellow star consists of a hand palm-sized, black-outlined, six-pointed star made of yellow material with the black title “Jew”. It must be worn visibly and firmly sewn onto the left breast side of the garment.

§ 2 Jews are forbidden a) to leave the area of their municipality without carrying with them written permission from the local police; b) to wear medals, decorations and other badges.

The new traffic limitations in Hamelin are not practical. As long as Jews still live here, they do not need to use public transport. They can go by foot in Hamelin. The provision of the template B identification form on yellow card therefore seems superfluous.

I kindly ask you to report to me by 1st March of this  year on whether and if applicable which synagogue communities or Jewish cultural associations may still exist in the district. 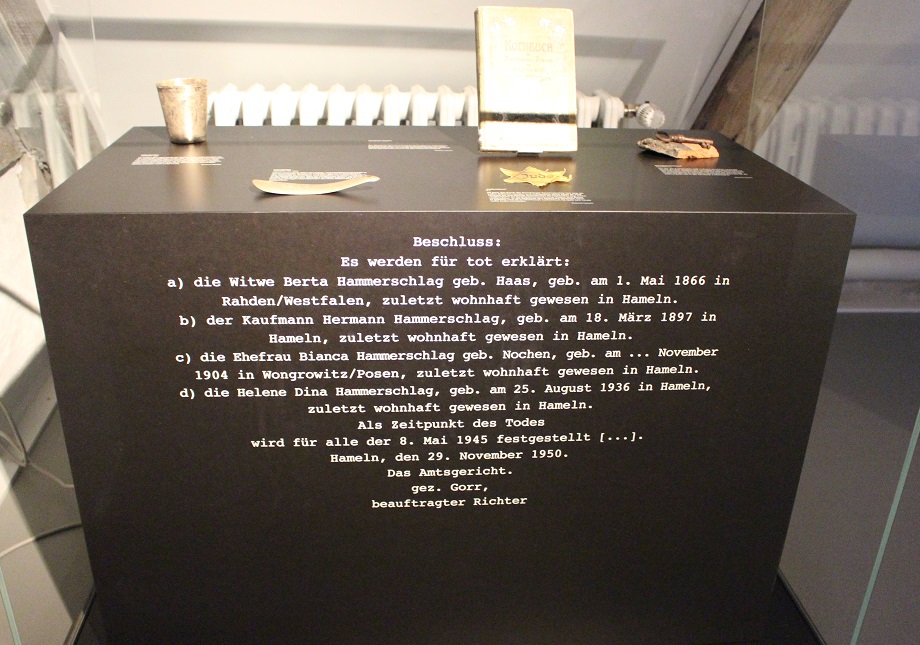 In September 1940, the museum bought the silver cup with the inscription “Salomon Jonas 1743” for 125 marks in Hanover. This clearly happened because the cup came from a Hamelin silver workshop. Connections with the Jewish Jonas families, which at this time still lived in Hamelin, probably did not exist or were not investigated by the head of the museum at the time.

The Jewish Rosenzweig family lived in Bürenstraße until 1929, opposite the synagogue. When the family emigrated to the USA before 1933, the housemaid received the cookbook as a reminder of her previous employer. However, it also reminded her of her first meeting with her future husband, who as a journeyman worked for the butcher where she bought kosher meat for the household.

Albert Löwenstein ran a shoe and confectionery business in Osterstraße. In early 1933, he was forced to close his business and emigrated with his wife Laura to the Netherlands. Shortly before the end of the war, he was arrested, but was freed by Allied troops soon afterwards and was thus one of the few survivors of the once thriving Löwenstein family.

Almost nothing remains of the synagogue in Bürenstraße, which was set on fire on 9th November 1938 and completely torn down soon afterwards. This key from the chapel is an exception. At the time of the destruction, it belonged to a Hamelin master watchmaker who was responsible for the maintenance of the clock in the synagogue.

With few exceptions, all those defined by the 1935 Nuremberg racial laws as Jews and who were at least six years old had to wear a “Yellow star” as compulsory identification from September 1941.  How this “Yellow star” got into the museum collection, to whom it belonged and even whether it is authentic can no longer be determined today.

The following are declared as dead: