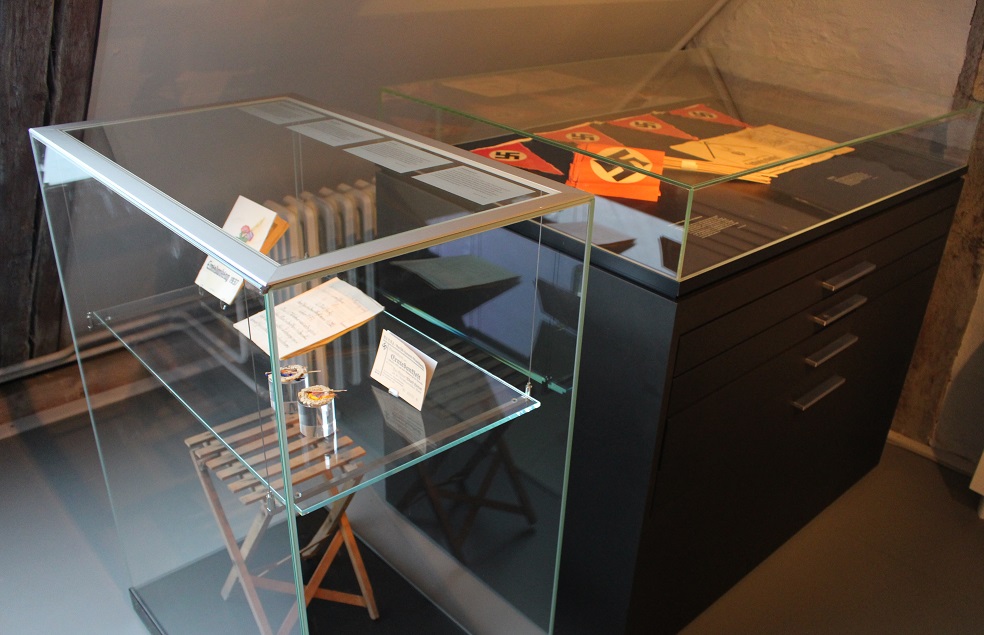 Fringe programme of the organisation “Strength through Joy” (K.d.F.) for the Reich harvest festival

Arrival, Bückeberg, departure: The trips organised by “Strength through Joy” did not envisage a long stay in Hamelin. This was not the way to earn money! In 1935, the visitors were promised “the opportunity to spend some days in the Weser Hills.” As a result, the fringe programme in Hamelin became ever more comprehensive.

An event like the Reich harvest festival was of course covered in the school curriculum: The primary school pupil Magdalene B. from Groß Hilligsfeld wrote an essay in October 1933 – with only two mistakes – on “The harvest festival on 1st October 1933.” The many special trains that passed through the village impressed them the most.

An entry ticket for the festival grounds at the Bückeberg cost 20 cents in 1933. Today, very little is known about their sale. As mementos of the Reich harvest festival, visitors could buy small harvest wreaths which they could attach to their lapel. The programme for the festive events in 1937 served as a souvenir; initially it was printed with a coloured cover. 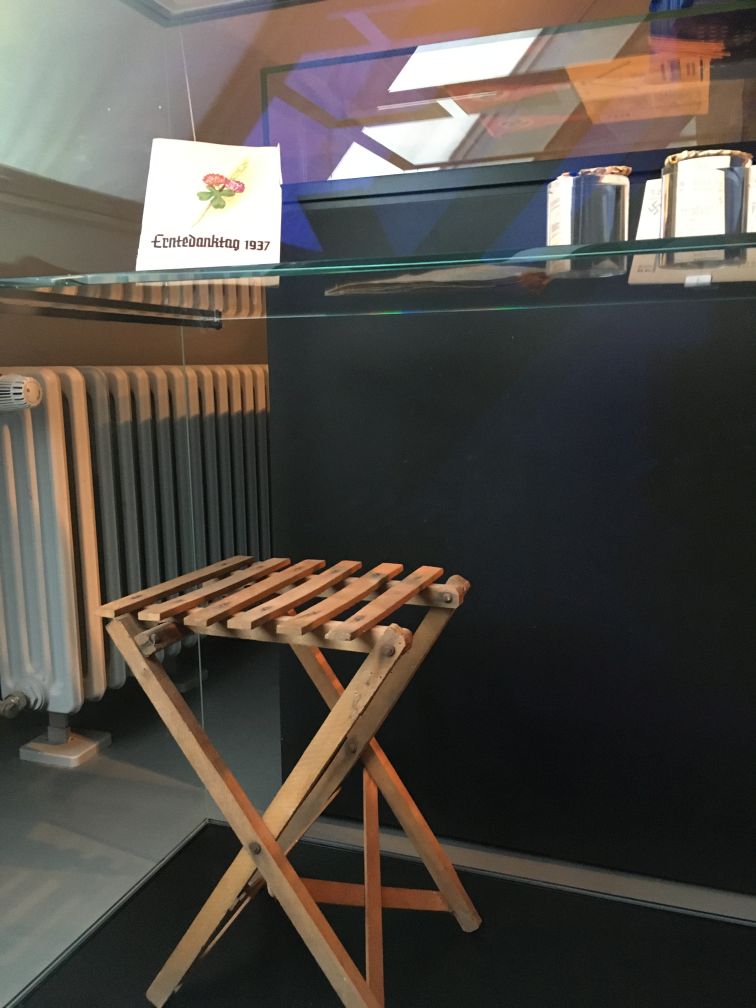 These stools were produced in the thousands in the region and sold to visitors at the Reich harvest festivities. The opportunity to sit down during the hours-long wait at the festival grounds must have been very welcome, even if the construction was not very stable. Presumably these stools have been used in many gardens and households all over Hamelin, unrecognised to this day. 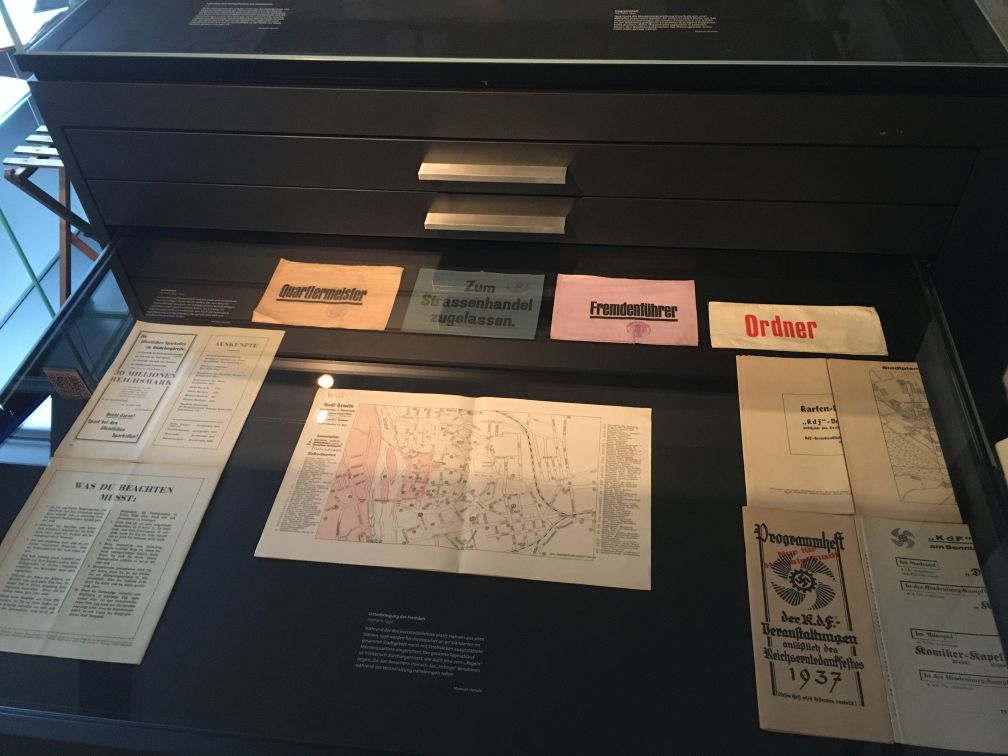 Great initiative was expected from the population in the decoration of houses. The Deputy Mayor Ahlswede thus urgently appealed to the citizens of Hamelin in 1933: “I have to my greatest astonishment discovered that the population […] has to some extent still not recognised at all the tremendous significance of the harvest festival for the city of Hamelin. I advise once again that probably never has an event like the harvest festival been celebrated in the Hamelin area.”

The mass event of 1933 had to be organised within two months. At many points only the improvisation skills of the local party branches held things together. The NSDAP in Emmerthal at the Bückeberg printed its own programme booklets, in which the sketched site plans would not have met the quality standards of the planning committee in later years.

SA march on the Weser bridge and at the railway station

The SA are parading right across the city, with visitors and locals lining the streets.

Hamelin basked in the new attention.  Every measure was taken to present the city as National Socialist. Propaganda Minister Goebbels was impressed at a work meeting before the festive event in 1934 and noted: “Large entourage to Hanover. From there by car to Hamelin.  Massive reception.”

Crowds at the Weser ferry terminal

The city is bursting at the seams. The Weser ferries are doing good business: Many people are using the boats for trips or the journey to the Bückeberg.

Hardly a house which is not exuberantly decorated. In 1934, the Lord Mayor and district leader appealed to the inhabitants: “Show the national comrades from all districts of Germany who are meeting here that they are very welcome. Decorate your houses for this purpose as prettily as you can!”

The festival must have been a special experience for these national costume wearers, after a relatively short journey. They were used as eye-catchers: They lent the activities the appearance of tradition and connection to the homeland.

Nothing was left to chance, even the banner slogans were prescribed. Most probably these specifications originated in the Reich Propaganda Ministry, so that the “manifestation of the will” of the people was fully in line with the regime.

Enormous loudspeaker units were set up to fill the large site with sound. To ensure that the correct pictures were taken for propaganda purposes, for example the “NSDAP Regional Film Department” of the Hanover South – Brunswick district was on-location and many photographers took pictures of the festival participants.

The visiting masses were at the Bückeberg for many hours, and therefore among other things there were tents for medical emergencies, drinking water hydrants and food provision such as that of the “Bavarian State Emergency Relief Services”.

There were no benches in the festival grounds. Craftspeople from the region thus offered the visitors simply built folding stools along the path to the site. They earned well. In front of the stacks stand two girls from the “League of German Girls” (BDM), the female counterpart of the Hitler Youth.

SA man drinking and garbage in the camp

Preparatory measures at the Bückeberg

In 1933, there was little time to prepare the festival grounds. In the following years, however, units of the Reich Labour Service were constantly on-site, first and foremost to build supply facilities and level and extend the festival area.

The city and environs had to make an army of volunteer helpers available for the Reich harvest festival, which for example could provide stewarding services, supervise the sleeping quarters and lead guided tours of Hamelin.  They received armbands as identification, as did officially permitted street traders, who hoped to sell goods to the visiting masses.

Hamelin was bursting at the seams during the Reich harvest festival. In 1936, mass quarters equipped mostly with straw sacks were set up for guests at 90 locations right across the city. The entire daily schedule was militarily organised, as demonstrated by the ten “rules” which, ironically, were intended to help the visitors better understand “correct” behaviour during the event.

To guarantee timely arrival at the festival site on the narrow paths, the visitor columns were assigned fixed routes according to their quarters. The approach for those with their own cars was spaciously arranged.  For anyone who lost contact with their group among the masses, a “lost persons’ meeting point” was provided in the Ohsen domain below the event area, signposted by posters on the festival site.

Largest farmers’ rally in the world