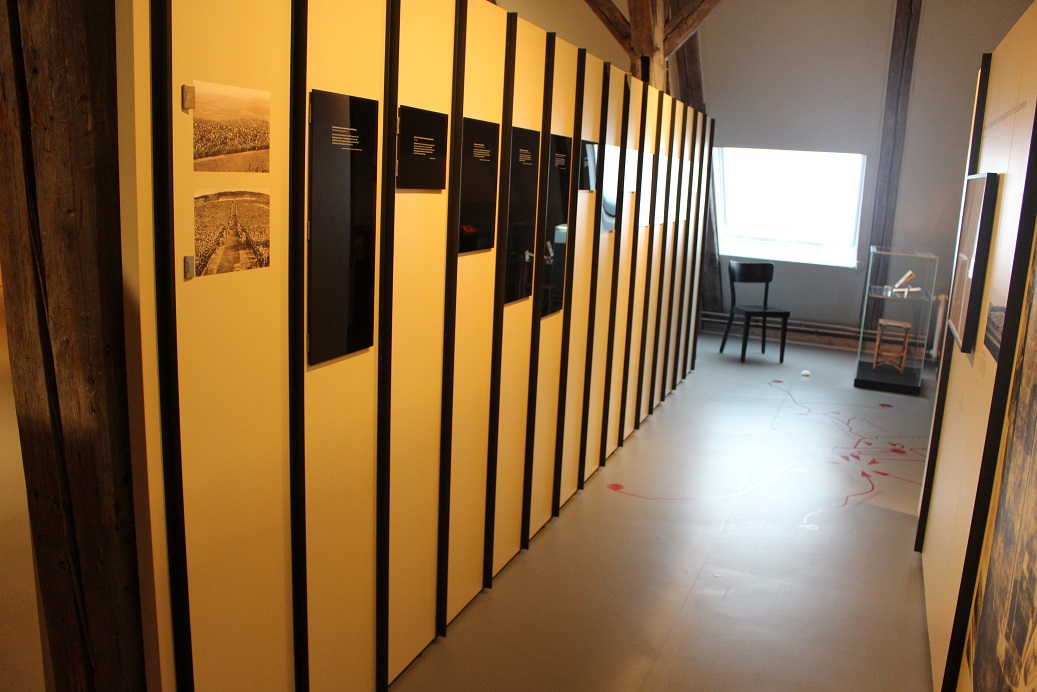 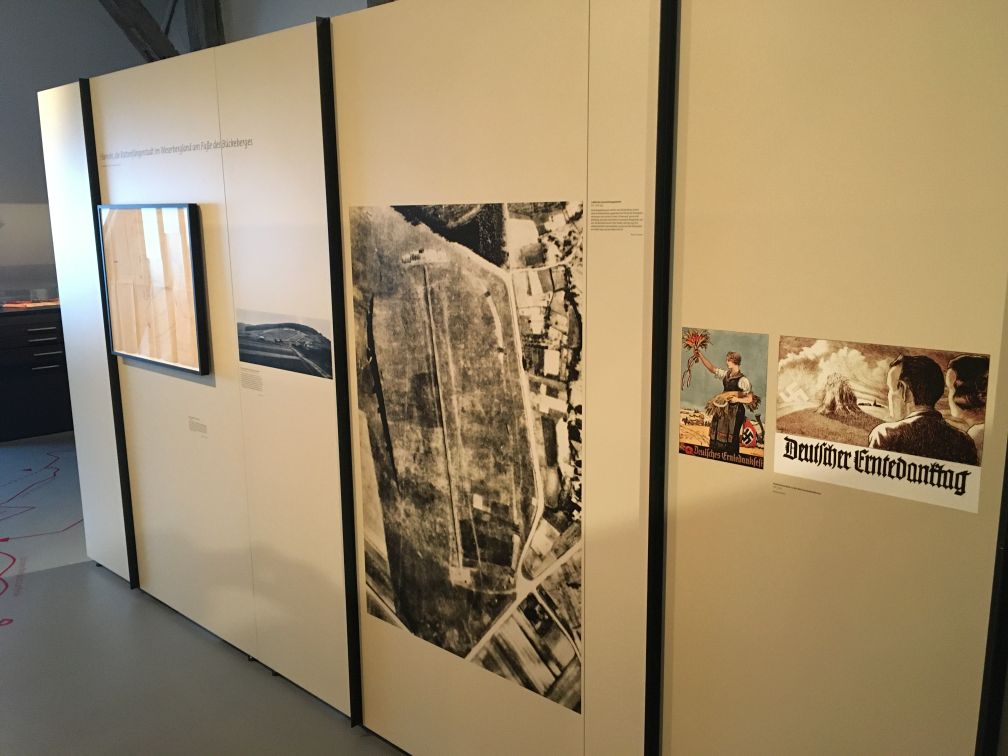 Aerial photograph of the convention site

The space design is plain. At the foot of the hill (below) stands the rostrum, and opposite is the platform for guests of honour.  They are connected by a central avenue called the “Führer’s walkway”. The oval festival site, surrounded by flags, in which the visiting masses took up their places, was constantly levelled and widened from 1933, so that the field was eventually 600 metres long and 300 metres wide.

Convention site at Bückeberg viewed from the northwest

In the summer of 1933, the decision was taken to plan a National Socialist mass meeting for the farmers. “Why the Bückeberg? […] Here! the hometown of Hermann of the Cherusci! Here! the hometown of Horst Wessel! – crossing again and again, intersection: Bückeberg near Hamelin.” This was how the propaganda explained it. Actually, however, there were practical reasons: Hamelin was conveniently situated and the site itself largely belonged to the Prussian state. 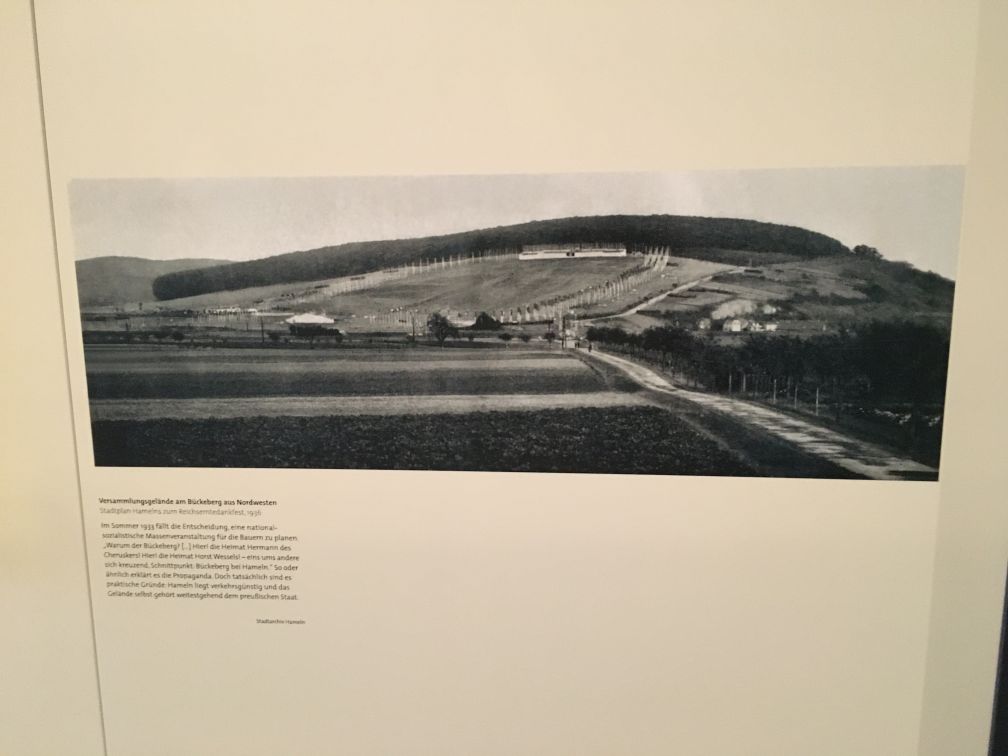 Design of a stadium, © Museum Hameln

Design of a stadium at the Bückeberg

The site at Bückeberg was only used for one day per year. To change this, an “arena” was designed in 1938 which was intended to host sporting events. Hitler refused the plan, however: No large-scale constructions at the Bückeberg, so that the Reich harvest festival continued as a festival in “free nature”. 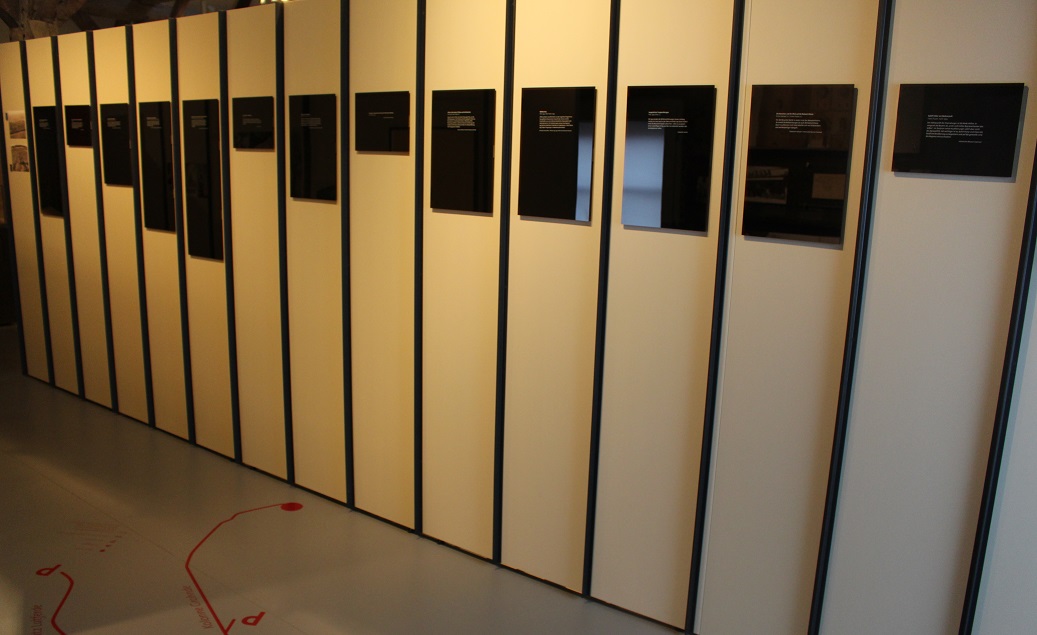 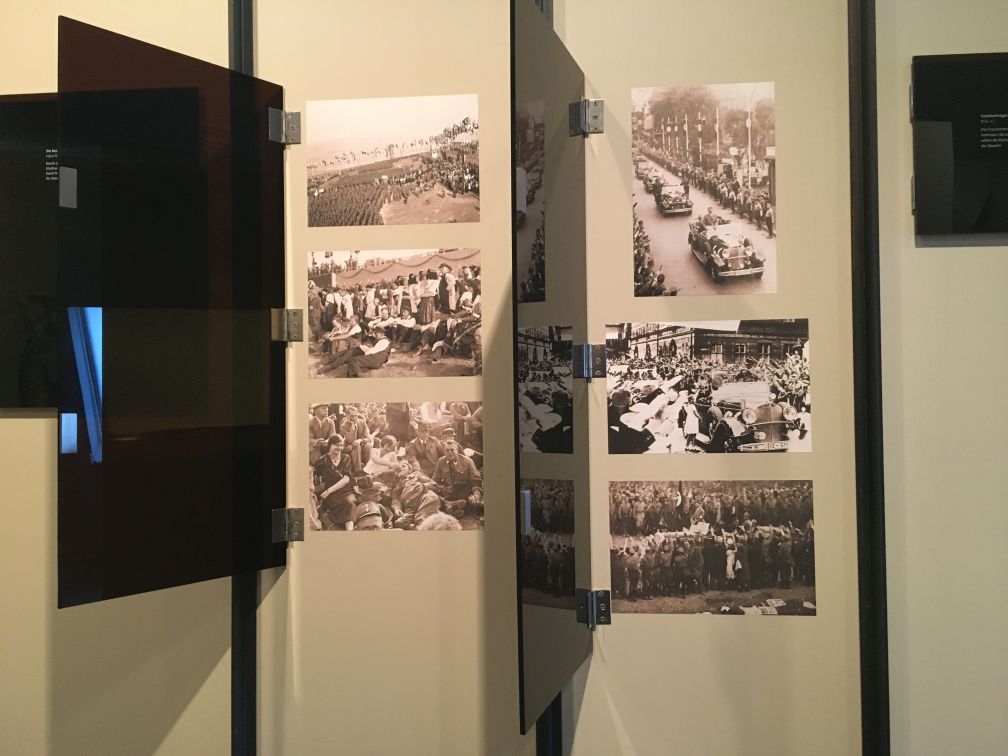 The filled event site from the upper rostrum

The individual merges into the whole, they should feel part of the “national community”.

View from the rostrum

Visitor columns on the way to the Bückeberg

The approach of the visitors was strictly regimented: on fixed paths at fixed times. Additional pontoon bridges led across the river from the group accommodation lying to the west of the Weser.

The representatives of the National Socialist regime arrived in more comfort. In 1934,  Heinrich Himmler (SS Reichsführer in black SS uniform) and Werner von Blomberg (Reich Defence Minister, in Reich Defence uniform) arrived by ship at the state ceremony, among others.

The visitors arrive at the festival ground

The impression of a “national consecration site” was intended to be conveyed to the visitors by the garland of Swastika flags. The visitors were not allowed to move freely, however! From 1934, each column was assigned its own area on the festival grounds.

Waiting audience at the festival site

The visitors had to wait for hours on the festival grounds until Hitler arrived. There was little entertainment to stave off boredom, or if so, it did not reach the whole throng of people.

Adolf Hitler in Hamelin and on the road to Bückeberg

Hitler arrives triumphantly in an open car. The whole route is lined with people. The dictator comes close to the people. Pictures with children in particular, who offer him crop bouquets, were used for propaganda purposes!

Wearers of traditional costume on the central avenue

The traditional costume wearers take up position on the central avenue. They form the cordon for Hitler’s route through the masses, a backdrop for pictures of the dictator as champion of the farmers.

Hitler on the central avenue

The arrival of the dictator seems like salvation for the visitors. Indescribable rejoicing breaks loose when Hitler walks up and later back down the slightly raised central avenue.  The march through the masses lasted for three quarters of an hour … for a few hundred metres!

A countrywoman presents the harvest crown on the upper rostrum

Then Hitler takes his place with his entourage to observe military exercises on the plane lying towards Hamelin (from left Reich Defence Minister von  Blomberg, Hitler, Reich Minister of Food and Agriculture Darré, Reich Minister for Popular Enlightenment and Propaganda Goebbels).

Clearly nobody doubted the logic of the programme: The celebrated farmers needed the protection of strong armed forces; they made an essential contribution to all areas of life. The show extolled the regime: In 1933 cavalry units formed a Swastika on the plane, and in 1935 aircraft flew in Swastika formation.

From 1935, the military shows became increasingly comprehensive. A village was constructed on the plane, which was then invaded. The visiting masses saw here – without knowing it – a future war for which they were being prepared, and which they were intended to accept.

The spectators and their view of the rostrum

The mass event was the main experience for the spectators, since both the military exercises and also the rostrum could hardly be seen. Many are using field glasses and mirrors in the form of periscopes.

Adolf Hitler on the speaker’s podium

The highpoint of the dramatics was Hitler’s speech. He captivated the farmers by calling them the “first and deepest representation of the people”. Agricultural policy was not the main emphasis of his statements, however. Much more important was to spread enthusiasm among the rural population through pageant and splendour, and to bind it to the general line of the regime.

Hitler succeeded in spellbinding the audience at night much more easily. The audience themselves stand in a dark, swaying mass, while he stands in the light at the rostrum like a saviour. Organisational problems only permitted this spectacle in 1933, however: After the festival, countless visitors got lost in the area of the Bückeberg, since they could not find their way back at night.

Since the festival ended during the afternoon in following years, closing fireworks were only possible in 1933. Goebbels wrote in his diary: “The floodlights and high fires light up the darkness […]. The throng sings. Now all thank God! Stirring moment.” The hymn was only sung in 1933, and later the Horst Wessel song ended the celebrations.