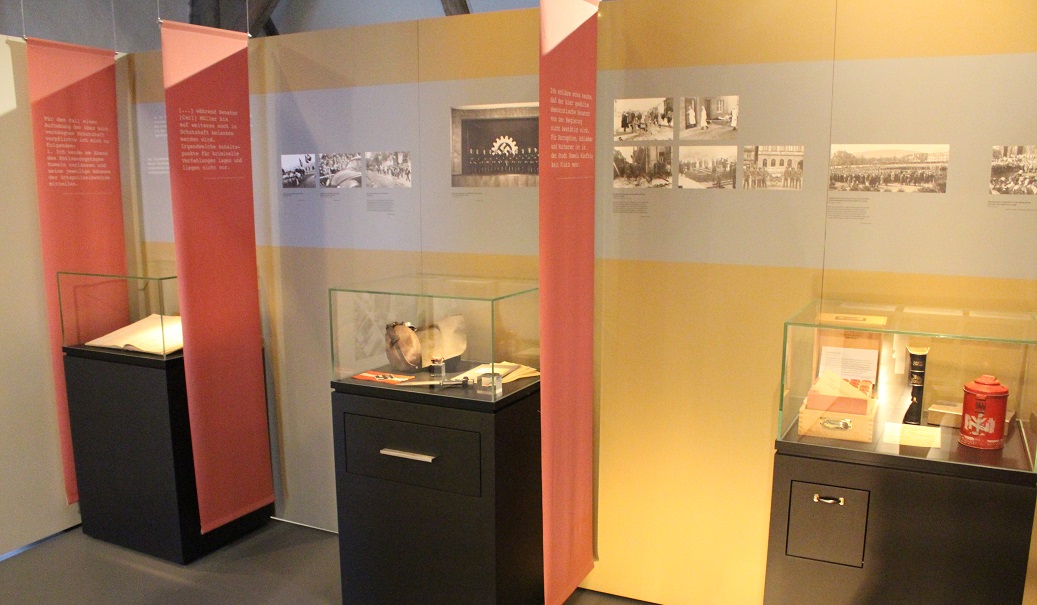 An Empire of Dust

January 30th, 1933: Hitler is appointed Chancellor of the German Reich. It takes only a few months for the NS to overrun Hameln. The Lord Mayor has to resign from office and political adversaries are imprisoned. All undesireable groups and associations are forbidden or have to become incorporated into the NS-organisation.

During the “Third Reich”, Hameln is put on the German map in a big way.  The National Harvest Festival attracts literally hundreds of thousands of people to the city yearly, until 1937.

The Jewish population continues to be ostracized. They are dispossessed and lose all rights. The synagogue is destroyed in 1942. Those who can’t emigrate are left in a hopeless situation. Almost all the Jews are sent to concentration camps. Hameln is spared major bombing until almost the end of the war. Then, in 1944/45 frequent air raids take place, causing the death of hundreds of people. 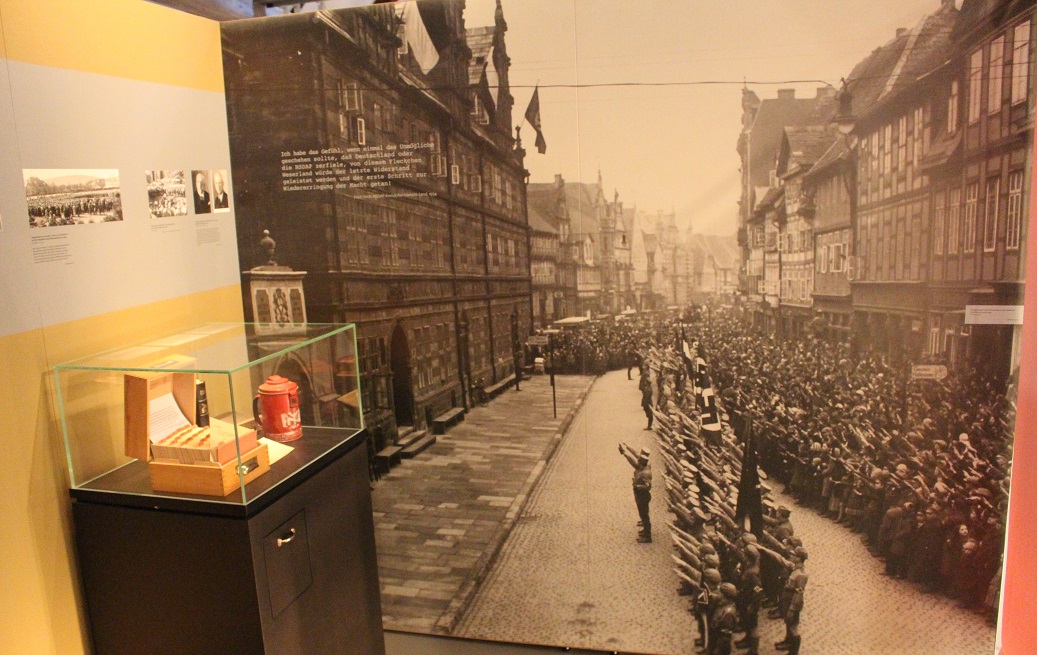 I have the feeling that if the impossible should happen, that Germany or the NSDAP should crumble, that the last resistance and the first step towards the restoration of power would come from this spot on the Weser!

Announcement of the National Socialists before a filled registry office on 8.3.1933 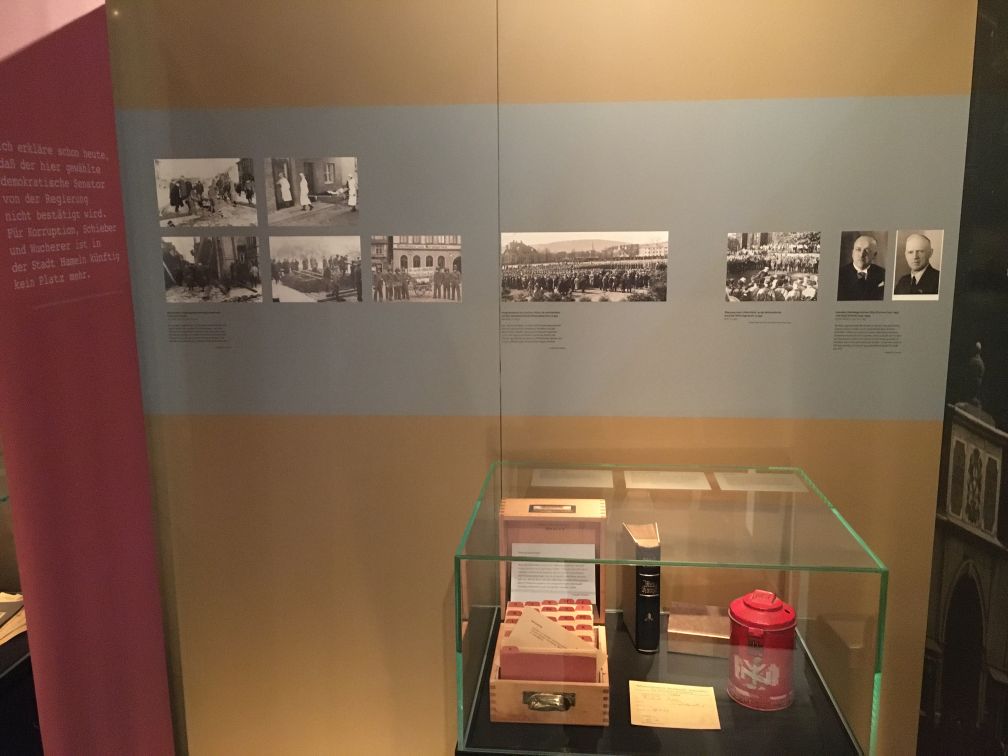 The NSDAP removed its political opponents in Hamelin from March 1933. Communists and Social Democrats were arrested. Even the arch-conservative Lord Mayor Scharnow was forced to leave office, or otherwise, threatened Senator Karl Brombach, “something one wouldn’t like to talk about could easily happen in Hamelin. ”Sharnow was removed in July 1933. In January 1934, Detlef Schmidt took over the position.

Planting of “Hitler oak tree” at the cathedral by the Hitler Youth on 7.5.1933

Field church service of the garrison, the police, the SA and the Steel Helmets in Sedanplatz (today Rathausplatz) on 21.3.1933

“Potsdam Day”, on which the National Socialists demonstratively honoured the traditions of Prussia and the Empire, was also held in Hamelin. Party and state visibly merged. Ever since February 1933, SA men could serve as special constables and thus quite officially join the hunt for political opponents.

From 1935, all citizens could be obliged to take part in exercises of the Reich Air Defence Association. The local group – photographed at the horse market – had already existed for three years in 1936. In the February of that year, it participated in a comprehensive exercise, which involved the whole Klüt neighbourhood. The population had to be prepared for modern warfare!

I declare today that the elected Democratic Senator is not vindicated by the government. In future, corruption, profiteers and usurers will not be tolerated in the city of Hamelin.

[…] while Senator [Carl] Müller will be kept in protective custody until further notice. Clues to criminal misconduct were and are not present. 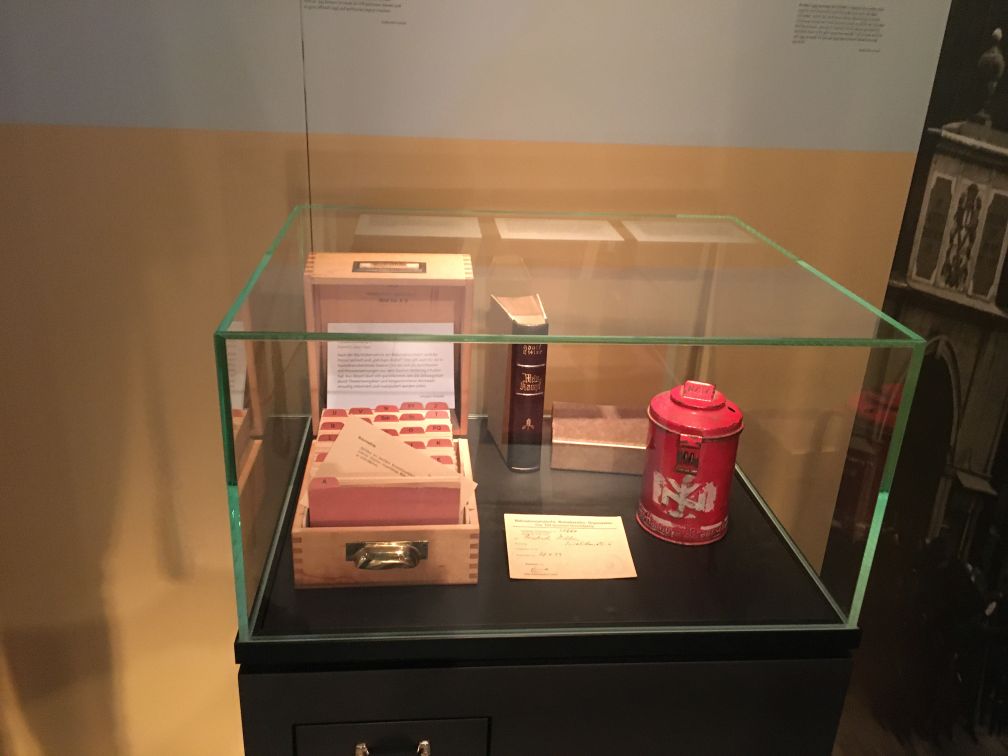 The NSDAP wanted to penetrate all areas of the life of the population. The “National Socialist Factory Cell Organisation” was intended to achieve this within individual firms. Hamelin citizen Friedrich Hilker joined in April 1933, before the old trade unions were forbidden on 2.5.1933.

As was customary from 1936 in Germany, the married couple W. received for their wedding in 1938 a copy of Adolf Hitler’s “Mein Kampf” with a dedication from the Lord Mayor of Hamelin, Detlef Schmidt. Whether the married couple kept the book after the Second World War merely as a reminder of the wedding is not known. But characteristically of the post-war period: They clearly placed it shamefully turned around on the bookshelf, as the reverse side of the slipcase shows, being faded yellow by the sun.

Many organisations which before 1933 provided help for the needy were suppressed and banned by the National Socialists. They were replaced by the “German People’s Winter Relief” (WHV), among other things. Many social projects were only possible because tireless volunteer helpers collected private donations for the “national community”.

It is noticeable that the label has been replaced. The tin was also intended for use after the end of the war. 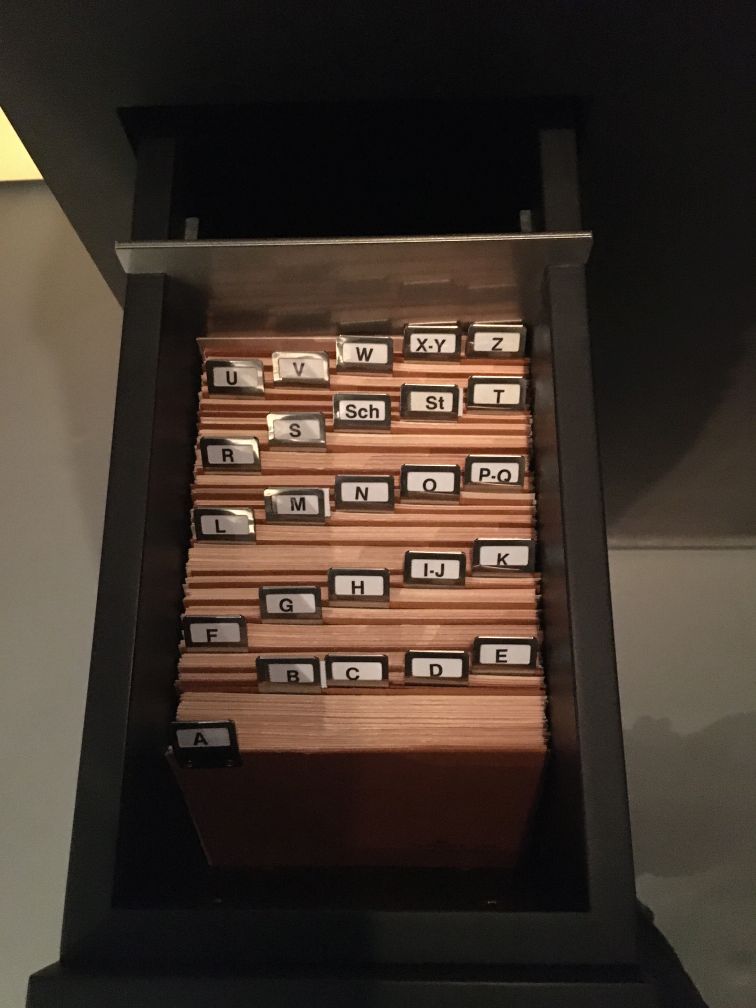 Following the seizure of power by the National Socialists, the press was censored and “brought into accordance with National Socialist principles.” This also applied to the Hamelin newspaper, the Dewezet, of which a filing box including press statements from the Second World War has survived. These show how newspaper readers were informed in a biased way and manipulated using targeted subjects and prescribed wording. 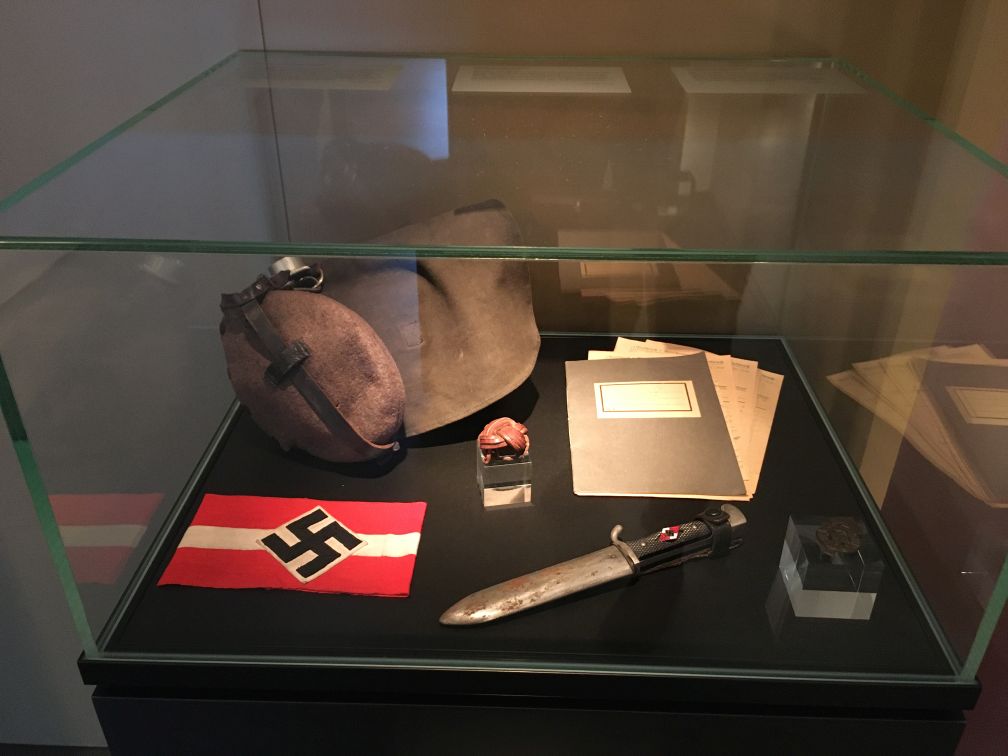 Pieces of uniform and equipment

A prioritised goal of the National Socialists was the ideological control of young people.  From 1936, almost all young people in Germany were obliged to join the “Hitler Youth”. What began as an adventure for 10-year-olds soon turned out to be paramilitary training, of course with a uniform and equipment, including Swastika armbands, necktie knots, haversacks and flasks.

One can easily imagine the pride with which the Hitler Youth wore their knives at events. In around 1940, a Hamelin citizen received the knife, which he also wanted to keep after the end of the Second World War. But he had to break from the grip of the Swastika, which had now been banned as a symbol by the occupying forces.

The “regular” Hitler Youth could earn badges of achievement in performance tests, which included shooting, athletics and map-work. There was also the Hitler Youth Communications offering training in radio communications. It was fascinating for the boys to learn skills which their parents mostly did not possess. 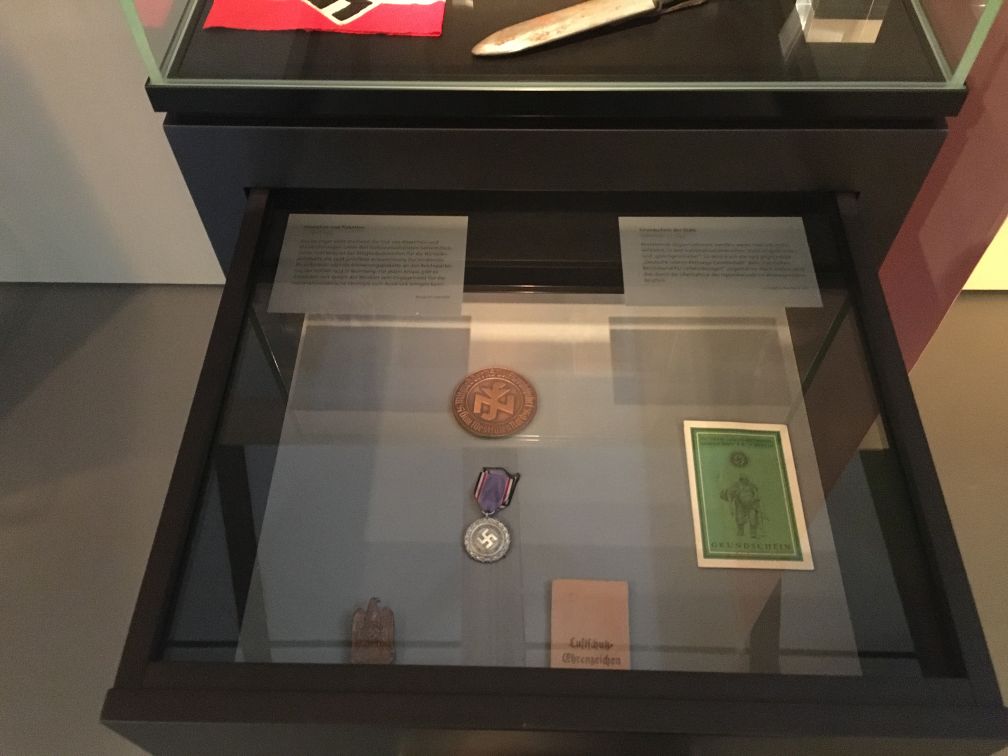 Existing organisations, if not forbidden, were integrated into the state and “brought into accordance with National Socialist principles”. The “German Lifeguard Association”, founded in 1913, was thus assigned to the “German Reich Physical Education Association”. This was made externally visible by including the Swastika in the club emblem. 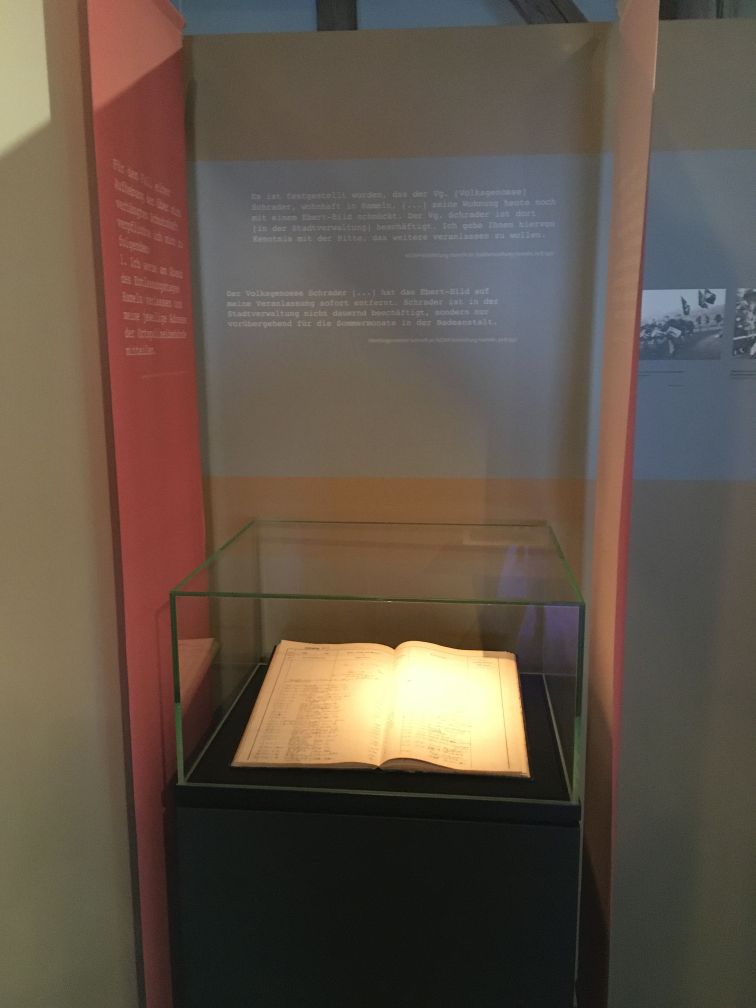 Hamelin prison book of the deceased

The Prussian prison, south of the inner city on the banks of the River Weser, changed completely under the National Socialists and was made into a prison in 1935. Mostly political prisoners, but also Jews and homosexuals were imprisoned there.  “War criminals” sentenced according to special criminal law and increasingly foreign prisoners followed during the war.  The detention conditions in the prison with its camps were inhumane and worsened still further. The many deaths registered in the institution’s book of the deceased from February 1943 demonstrate this.

In case of the ending of the protective custody imposed on me, I undertake to observe the following:

1st On the evening of the day of discharge, I will leave Hamelin and inform the local police of my respective address.

The national comrade Schrader […] immediately removed the Ebert picture at my behest. Schrader does not work continuously in the city administration, but is temporarily at the bathing destination during the summer months.