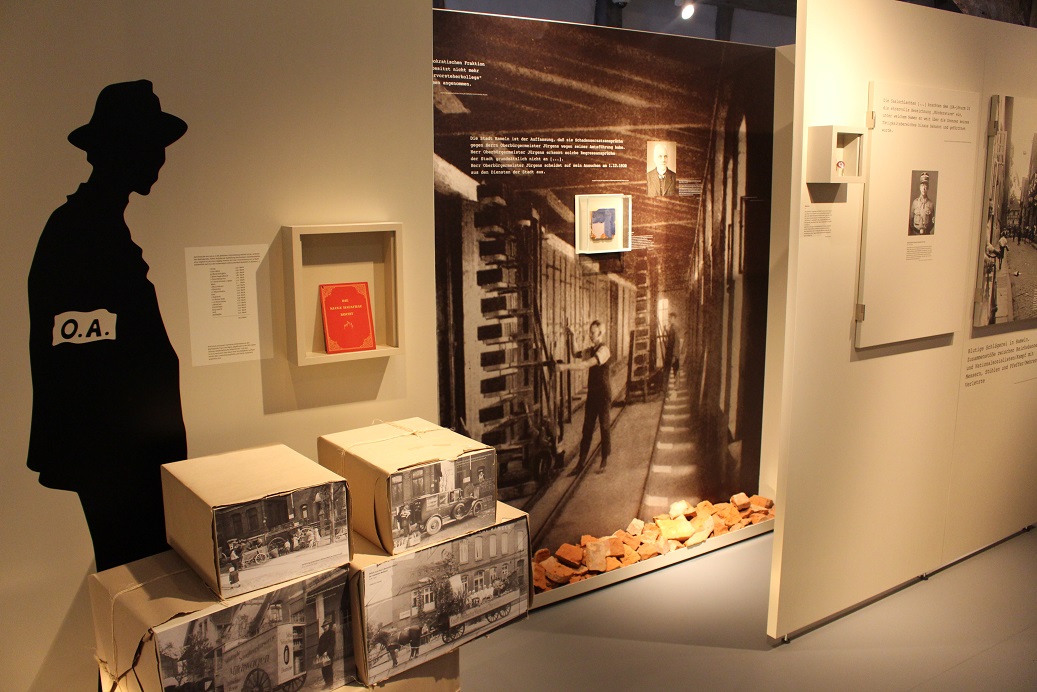 Weimar Republic – Breakdown and rise of the NSDAP

Due to the reduction in my benefits from 20th of this month, I would like to ask you, Honourable Mr Chancellor of the Republic, to read through the enclosed list and determine whether it is possible to provide even a basic standard of living for a family of 7 persons from support of 15 marks per week […].

printed in the SPD-linked newspaper “Lower Saxony People’s Voice”, 31.8.1932. This text was presumably composed by the editor using realistic benefit levels and prices.

The motion of the Social Democrat parliamentary group, “The council has no confidence in the Lord Mayor” is carried by 8 votes to 6.

Protocol of the joint session of the Hamelin municipal committees, 28.5.1930

The city of Hamelin believes it has the right to claim compensation from Lord Mayor Jürgens due to his administration.

Lord Mayor Jürgens at his own request resigns from his position on 1.12.1930.

Settlement between the city of Hamelin and Lord Mayor Ado Jürgens, 4.12.1930 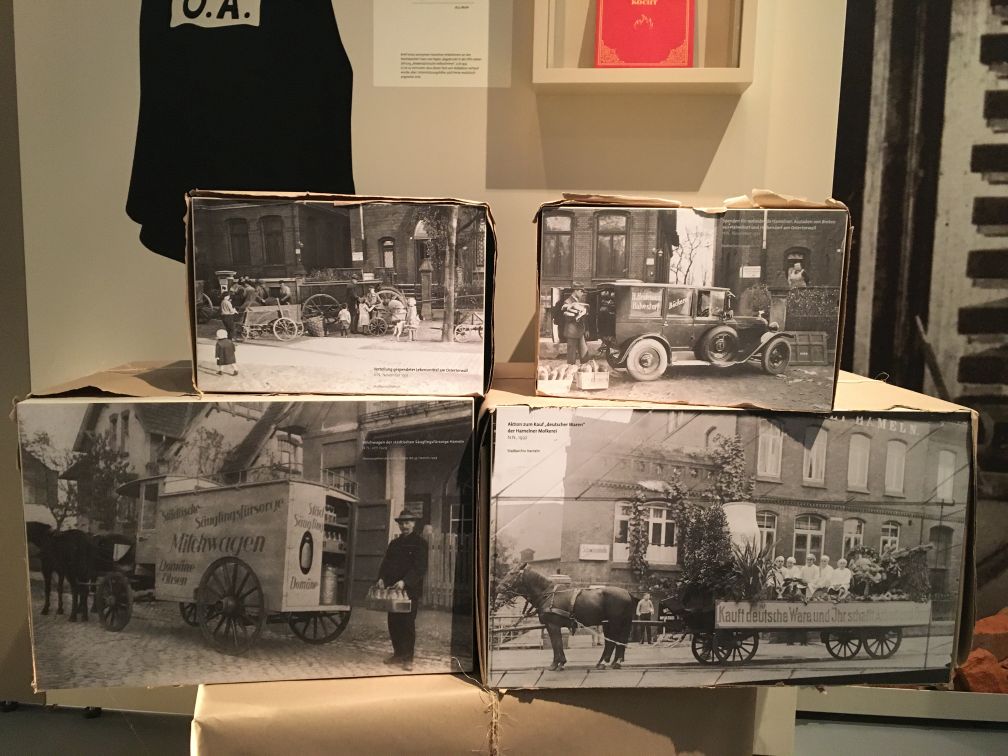 Donations for the needy, © Museum Hameln

Distribution of donated food at the Ostertorwall

Donations for needy Hamelin citizens: Unloading of bread from Halvestorf and Herkendorf at the Ostertorwall

Campaign for the purchase of “German products” of the Hamelin dairy 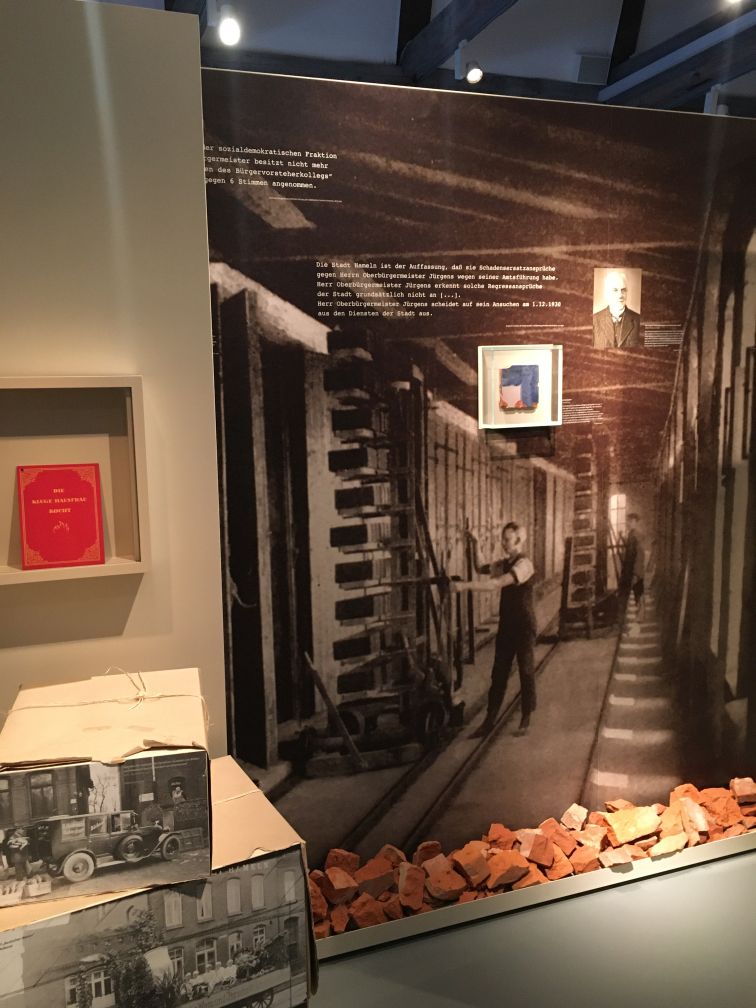 The Hamelin clinker plant founded in 1927/28

To partake in the construction boom of the 1920s, the city first manufactured clinker bricks in the city brickworks and later in a large, newly-built clinker plant. Unsuitable clay led to high proportions of waste, the desired quantities were never achieved and the factory made horrendous losses from the beginning. The operation was halted in 1930.

The clinker factory bankruptcy had negative consequences for the city: It remained sitting on 1.5 million Reichsmarks of debt and had its back to the wall financially in the midst of the world economic crisis. No room for manoeuvre with voluntary social contributions or even investments! Lord Mayor Ado Jürgens was made responsible for the disaster and as a result had to resign in December 1930.

Hamelin clay was unsuitable, as it produced a lot of waste.  The city, as the owner of the plant, had to add clay from Duingen bei Alfeld. The factory could no longer be operated profitably like this, especially since the construction boom of the 1920s had come to an end with the world economic crisis. 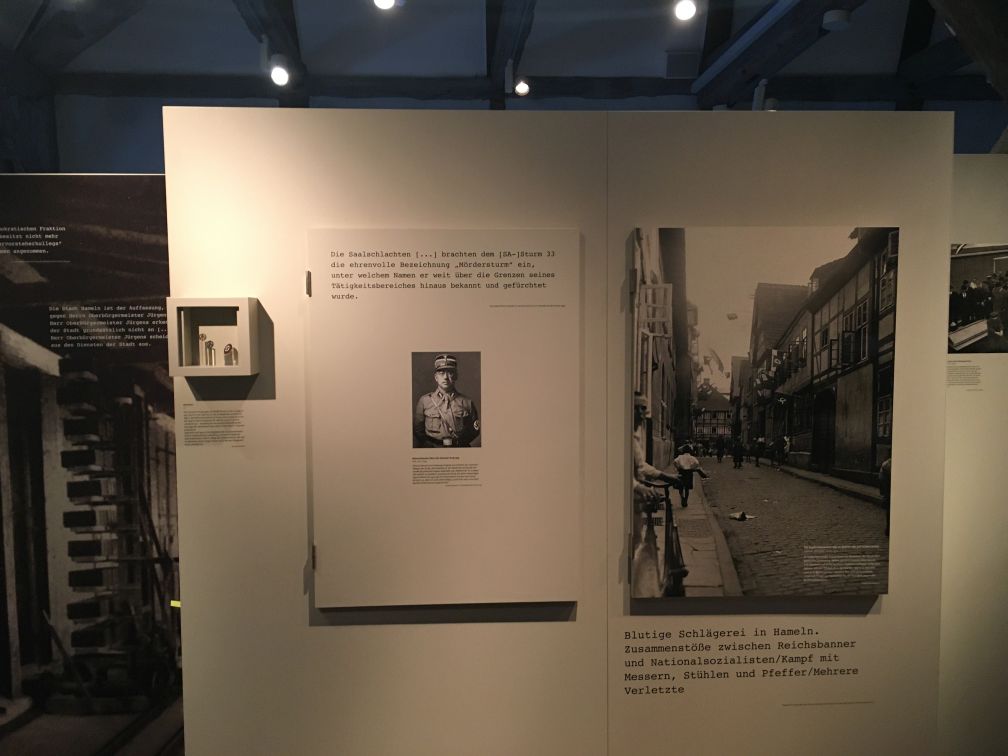 Rise of the NSDAP, © Museum Hameln

Rise of the NSDAP

The local Hamelin branch of the NSDAP formed in August 1925.  In July 1928, it only had 20 members, but recorded increasing intake during the Great Depression. The SA, which had been present in Hamelin since 1929, also grew rapidly. The “Sturmbann [assault / storm unit] I/164”, whose First Sturm was based in Hamelin, arose in 1930 from the “SA-Sturm 33” – responsible for the whole of the Weser Hills.

At the latest by 1933, membership of National Socialist organisations was socially acceptable and assisted career advancement. Many proudly displayed their Party or SA badge in day-to-day life, the wearing of which is illegal today in accordance with § 86a of the German Criminal Code.

The [SA-]Sturm 33 gained the honourable title of “murder unit” through the brawls […], by which it became known and feared far outside the limits of its areas of activity.

Shop closure of an NSDAP supporter in Berlin

Reichstag election results in Hamelin from 1920 to 1933

The initially most often elected party in Hamelin, the National Liberal DVP, lost votes dramatically during the Weimar Republic in Hamelin. The “Guelph Party” DHP sank into oblivion after the independence of the province of Hanover from Prussia became unattainable in 1924. Only the SPD made gains in the good years of the Weimar Republic. From 1930, the rapid rise of the NSDAP began, with it becoming easily the strongest party in Hamelin from 1932. Only in the undemocratic elections in March 1933 did it achieve an absolute majority.

Despite the leading role of the SPD in the months after the end of the First World War, from 1919 the conservative, pro-business and state official “bourgeois camp” held a majority on the municipal council. In 1929, the rise of the NSDAP began.  It gained an absolute majority in the local elections in March 1933. Already during this time, however, other mostly left-wing parties were massively obstructed and suppressed.

New construction of the Weser bridge and the barge train lock

Actually Hamelin could not complain about a bad traffic infrastructure in the 1920s. Two problems remained, however: The old Weser bridge, completed in 1895, was too narrow for vehicle transport and the Weser lock, last extended in 1893, was too short for modern shipping. Construction work began in 1929: A new wider bridge was built next to the old bridge, and on the western bank of the Weser, a 225-metre-long and 12.5-metre-wide barge train lock.

The Weser bridge was opened in 1931 and christened the “Friedrich Ebert Bridge” in honour of the first President of the Reich. The National Socialists renamed it as the “Weser Bridge” shortly after coming to power. When the barge train lock was finally finished, the new rulers – among them the National Socialist Senior President of the Province of Hanover, Viktor Lutze (in SA uniform) – celebrated it as an achievement of the Third Reich, though it was actually a child of the hated Weimar Republic. 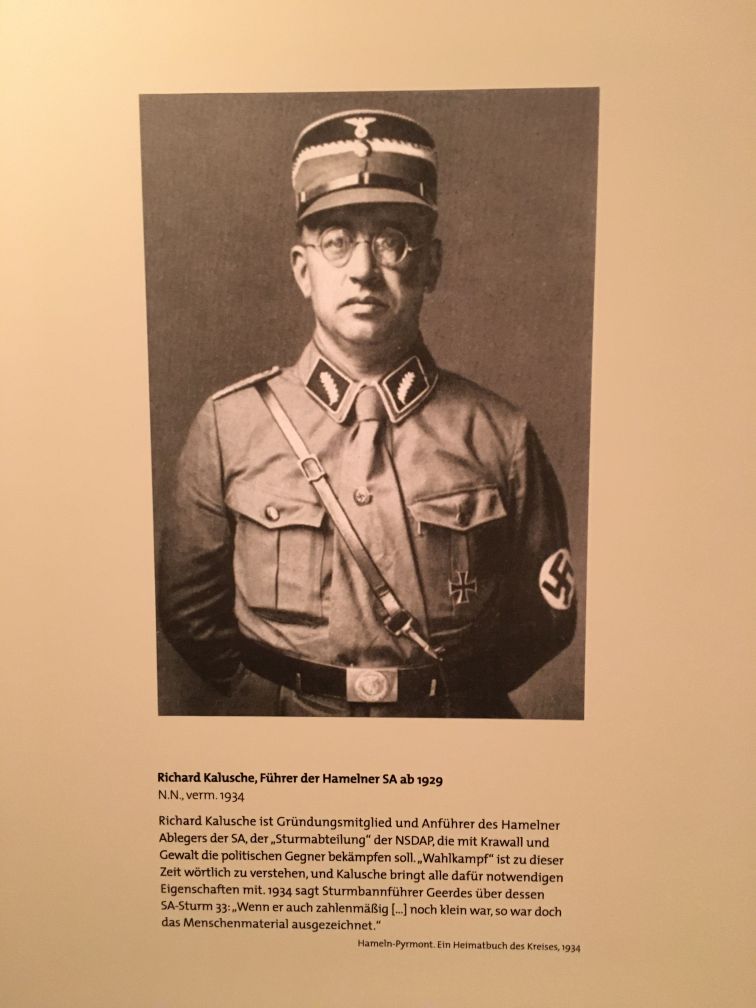 Richard Kalusche, leader of the Hamelin SA from 1929

Richard Kalusche was a founding member and leader of the Hamelin SA branch, the “Storm Detachment” of the NSDAP, which was set up to defeat political opponents through brawls and violence. “Election fight” during this time should be interpreted literally, and Kalusche possessed all the required traits. In 1934, Sturmbannführer Geerdes said of his SA-Sturm 33 unit: “Though it was still small in numbers […], the human material was excellent.”

Clashes between Banner of the Realm and National Socialists / fight using knives, stools and pepper / a number of casualties

Kupferschmiedestraße under the banner of political struggle, © Museum Hameln

Kupferschmiedestraße under the banner of political struggle

The inhabitants of the street display their wildly divergent political views. Next to the Communist flag with the hammer and sickle waves a Swastika flag, and in addition flags with three arrows, the symbol of the “Iron Front” founded in 1931 by the SPD among others and the Black-Red-Gold Banner of the Realm for the defence of the Republic against right-wing extremists.