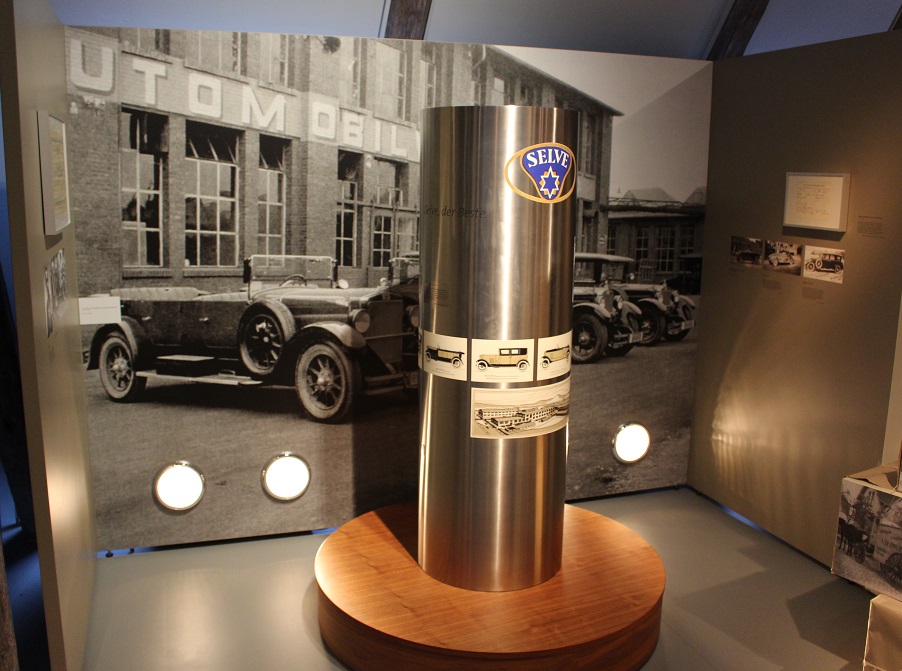 In 1917, Walther von Selve, a motor manufacturer from Altena, acquired the Norddeutsche Automobilwerke. In 1920, the first Selve models developed by the designer Ernst Lehmann replaced the “Sparrowhawk”, also produced during the First World War. These motors, which were manufactured in Altena and could reach a breathtaking speed of almost 100 km/h, were a guarantee of success at this time.

Selve-Automobilwerke became a public limited company on 17.11.1921 and the first shares were issued. The firm thus gained completely new financial horizons. The “Golden Twenties” only lasted until 1926 for the Hamelin automobile industry, however. Then new and cheaper competition edged into the German market.

Four “Selve Selecta” vehicles in front of the Selve-Automobilwerke

Illustrations from the advertising brochure “Selve, the best”

The Selve-Automobilwerke were defined first and foremost by the excellent quality of their vehicles, here proudly presenting a view of the factory on Ohsener Straße and the current model range. Information such as “8/32” refers to the engine performance: 8 stands for “fiscal horsepower”, which was typical at the time, calculated by cubic capacity and used for vehicle taxation, but the engine actually developed 32 horsepower.

Fair stand of “Selve-Automobilwerke” at the German Automobile Exhibition

The Norddeutsche Automobilwerke (NAW) was founded in Hamelin in 1907. It manufactured the “Colibri” from 1908, and a larger model, the “Sparrowhawk”, from 1911. Even very early on, the models were distinguished by very high reliability, such that the “climbing” of the Brocken in the Harz mountains could be celebrated with a poster.

Paul Niehenke and Rudolf Meyer sit at the wheel of a 9/36 Selve in Bad Neuenahr and wait for the start of a motor race. Success at motorsport was extremely important at this time. It demonstrated what could by no means be taken for granted with vehicles of this era: Selve cars combined performance with reliability.

Advertisement for the Selve Selecta

“Selve Selecta. The choice of the best.” The new model was a symbol of the decline of the firm: Selve was categorised as belonging to the luxury class because among smaller cars, it could no longer keep up with the prices of the assembly line-produced competition. There were simultaneously massive problems with the construction of the larger vehicles: The quality decreased. In January 1929, the factory was shut down.

The Hamelin trade office created this index card on Selve in January 1922. After closure in 1929, the Mederer Institute in Berlin took over the factory from 1931 and registered “Deutsche Automobil-Werke AG” in 1934. Nothing came of the “extensive orders from the state” repeatedly promised by the operator, however. In 1944, it is noted on the index card: “Shut down years ago.”

Title in an advertising brochure, around 1923