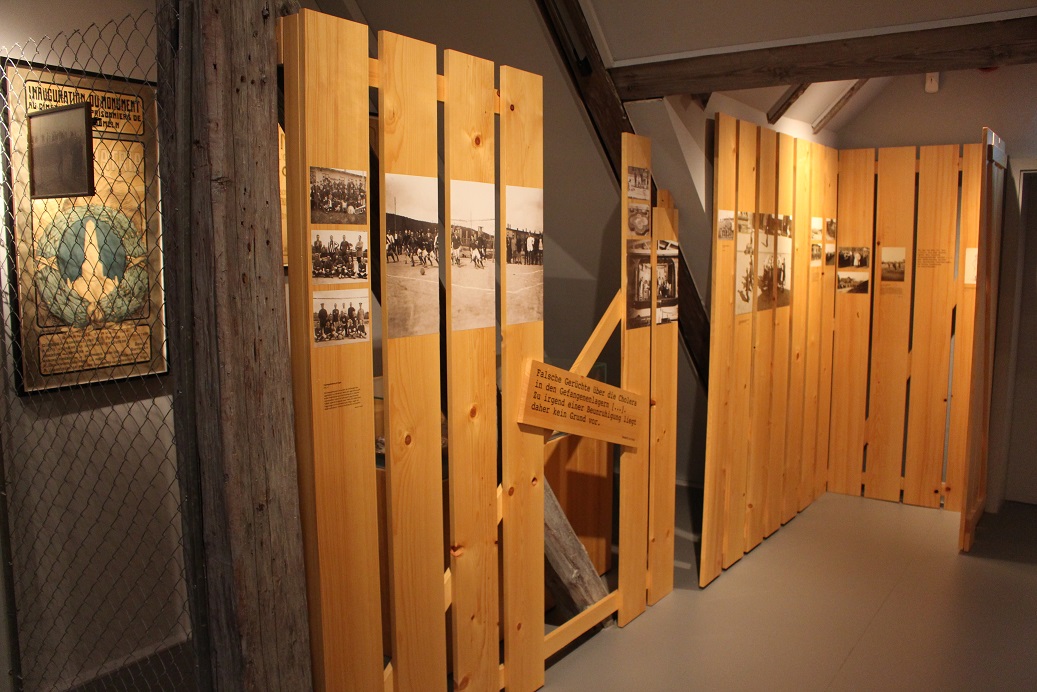 Hameln is one of the first cities in the German Reich to build a prisoner of war camp immediately after the outbreak of the First World War. First of all, at today’s Reimerdeskamp on the so-called parade ground some earth huts are built, then 84 residential and 20 functional barracks for ten thousand prisoners. The camp soon became a destination for the people of Hamelin on a walk. The prisoners of war were observed through the fence.

The official photographs show the prisoners at soccer tournaments and theater performances. The image of a humane treatment of the internees should be conveyed to the outside world. The real circumstances are likely to be different. The prisoners have to do work. As early as 1914, cholera broke out among Russian prisoners, who were separated from the other nations. Numerous prisoners die. A camp cemetery is set up on the Wehl. Around 1,000 internees were buried there until 1921. The Western European countries have their deceased exhumed after the war and transferred to their home countries. The graves of 757 Russian and Serbian soldiers can still be found there today.

After the end of the First World War, the return of prisoners of war began across Germany. In 1920 an internment camp for members of the Red Army was established from the prisoner, in 1921 a returnees‘ camp. In 1935, the camp was cleared of residential units. From then on, the Wehrmacht used the area as a training ground. 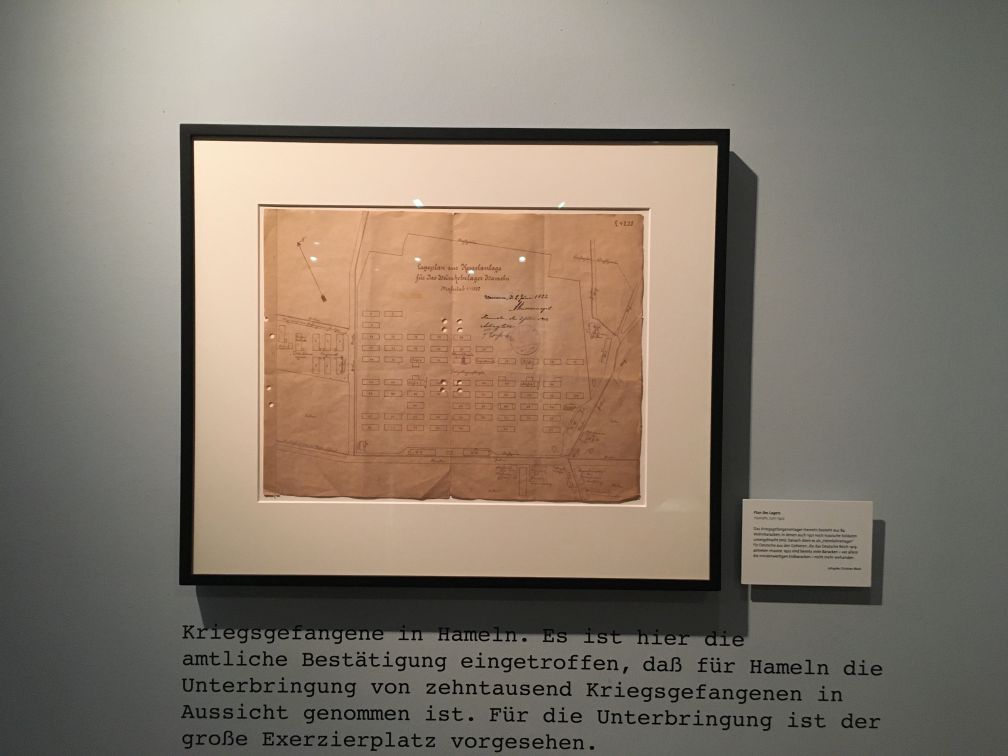 The prisoner of war camp in Hamelin consisted of 84 living quarters in which Russian soldiers were also accommodated in 1921. Then it served as a “home returners’ camp” for Germans from territories conceded by the German Empire in 1919. In 1922, many barracks – mostly the inferior earth barracks – no longer existed.

The prisoner of war camp functioned almost like a town with over 10,000 inmates. It seems strange, however, that a camp orchestra gave a concert on 10.3.1918 in a theatre barrack which not only appealed to the guards, but also clearly at least to the French prisoners. Music from Haydn to Rossini was played. How frequently such concerts took place is unknown.

Leisure activities in the camp

The prisoners of war attempted to overcome the monotony of life in the camp. There were a theatre stage and marching band in addition to the camp newspaper. The prisoners played football against each other in “national teams”, whereby the English even wore jerseys with a sewn-on flag. The decoration of the paths – including with Lower Saxony horses – stems from the guards.

False rumours of cholera in the prison camps […]. There is therefore no cause for alarm.

French prisoners of war bring post into the camp under supervision, here they pass through Osterstraße

Daily life in the camp

Little is known about the everyday life of the prisoners of war, most of all little about the forced labour performed.  Certainly the roll call on the camp main street and distribution of food from the kitchens to the individual barracks were a daily occurrence. If a Red Cross aid delivery arrived, this was a special event.

Fire safety exercises were among the daily tasks of the guards, as demonstrated here by members of the militia.

There are very few pictures of the Russian prisoners of war, who were accommodated in meagre earth barracks. Here one can see some of them arriving at the camp railway station at the pump station in 1914 – many already weakened by undernourishment and illness – during a visit by a Russian nurse and while reading stones on the square at Deisterallee.

It was around the 10th Dec. [1914] when the first cholera victims were driven out […]. The facts were kept secret from the population so as not to cause a stir.

Soldier of a Siberian infantry unit

Construction of a chimney for the camp laundry facilities

The artfully designed poster in the camp refers to the inauguration on 7.4.1918 of a monument financed by the prisoners of war themselves. The prisoners wished to remember the dead, who in many cases due to poor accommodation and provisions, died “pro patria”, for their respective Fatherland – a view for which the German camp administration also clearly had sympathy.

A total of 999 prisoners of war had been buried since 1914 on the edge of the forest, a kilometre north of the prisoner of war camp. The initially bare cemetery took on a dignified form in 1918, when on 7th April a monument financed by the prisoners of war themselves was unveiled.  While other states reburied their dead after the war – although the graves of two Belgians were clearly forgotten – the dead remains of 757 Russians and Serbs have stayed in the burial ground, which today is part of the cemetery at Wehl. 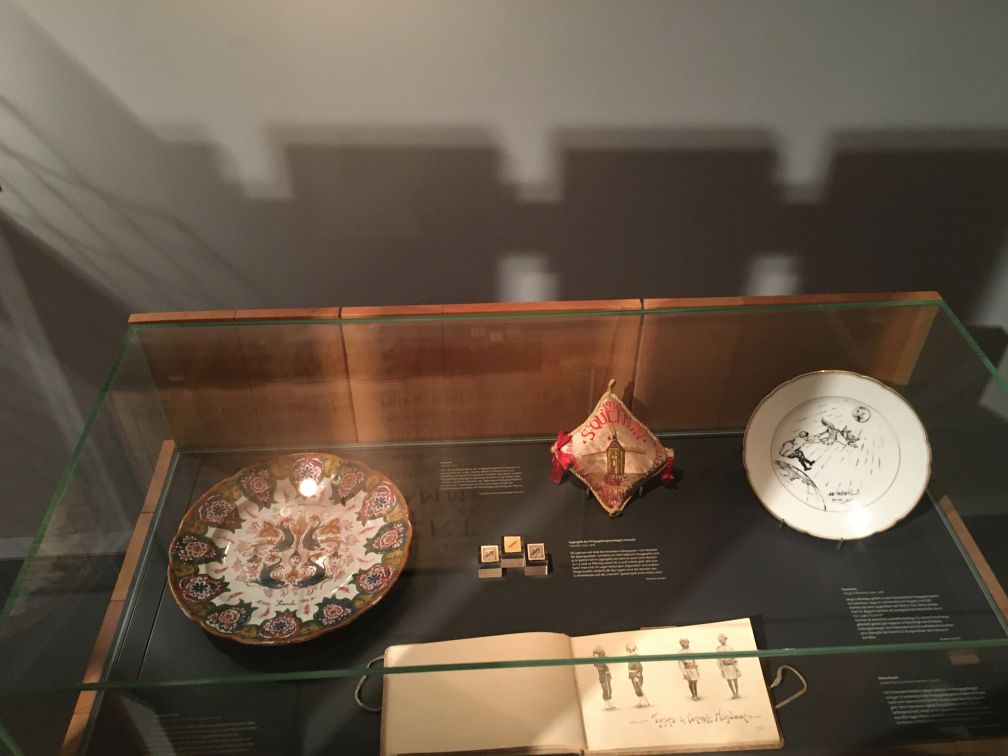 A Frenchman painted this plate and added his prisoner number 21372 between the decorations. He presumably worked in the prisoner camp art studio, or arts and crafts barrack.  Its products – paid for in money or goods – were much appreciated outside of the camp. The plate was given to the museum in May 1967 by the Hamelin resident Lina Bernhardt.

Little is known about the work activities of the war prisoners in Hamelin. A souvenir which relates to this has however remained in the Meyer-Hermann family until today. French prisoners are repairing breakwaters on the Weser and sleeping on a steamship of the “Upper Weser Steamship Company” below Ohr. Thankfully the family received this present, which relates to the war of 1870/71.

Camp money in the Hamelin prisoner of war camp

Whether any and how much money was received by the individual prisoners – for example for forced labour – is unknown. It was in any case paid in camp money, for which there were marks of 1, 5 and 10 cents, as well as 3 and 5 marks. Newspapers, cigarettes and other items could be bought with it in the camp. Outside of the camp, the marks of the Xth army corps, on which “Hamelin” was stamped, were worthless.

The sergeant Wilhelm Meyer worked in the prisoner of war camp. He supported the prisoners of war by giving them money and food for their art and craftwork. He received a sketchbook of drawings made in the camp by the Frenchman Carlos Ducoulombier, who had been in captivity since 1914. Meyer collected so many works that in the end he possessed something like a small museum at home.

Serge Cothereau was among the French prisoners of war in the Hamelin camp.  He was artistically gifted and captured scenes of life in the camp on plates.  These were handed over to Prof. Dr. August Gärtner as a gift when he inspected the camp.

Gärtner was a medic and microbiologist.  One of his areas of research was hygiene.  He visited various prison camps and took an interest in epidemics arising there.

The family of Dr. Burgemeister donated the plates to the museum in 2010. 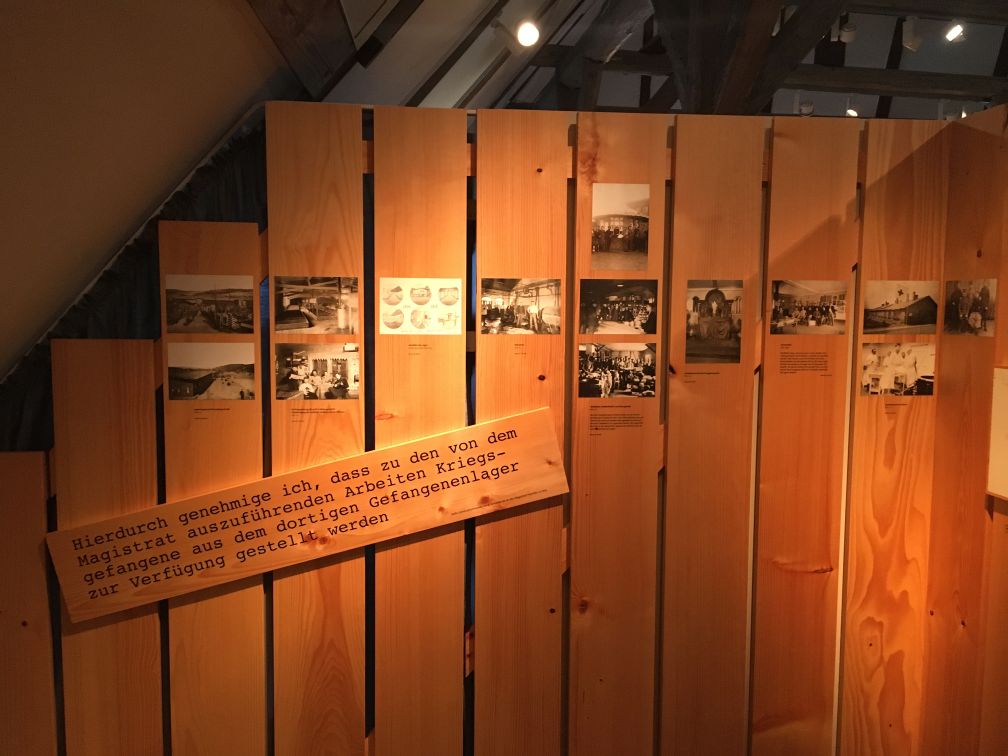 I hereby grant approval for prisoners of war from the prisoner camp there to be made available for the work to be performed by the Magistrate.

Deputy General Command of X. Army Corps to the Magistrate of Hamelin, 2.3.1915

The order of ranks also applies in captivity: Accommodation of regular soldiers and officers

Views of the camp

Some prisoners of war received parcels from home containing edible goods or books, whose contents were preexamined at the parcel checkpoint. Those with camp money could also buy tobacco goods in the camp store. The camp kiosk doubtless served as an information point in addition to selling the camp newspaper.

Prayer room for the prisoners of war

It can be assumed from the pictures that commissioned works for Hamelin citizens were produced in the “studio d’art”. Drawings by Carlos Ducoulombier hang there, as his nameplate on the wall shows. There was furthermore a “photographic agency” in the camp, from which most of the remaining photos came and which probably sold its products to customers outside of the camp. 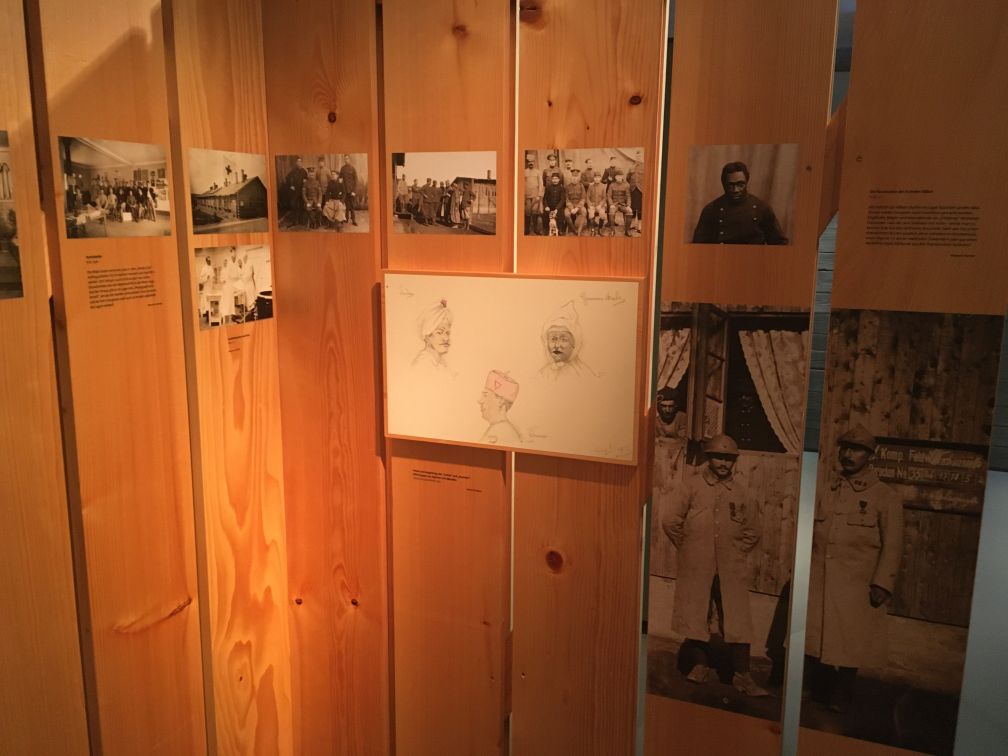 The fascination of foreign peoples

The multitude of peoples in the camp was so fascinating that group and individual photographs were constantly taken. The English, Belgians and especially the French, who were dubbed the “hereditary enemy” – like the two soldiers wearing helmets – are presumed to be known or to have clearly defined stereotypes. But who has ever seen a Russian, a Scot in a kilt, an Algerian in his flowing robes or even a dark-skinned African from the French colonies?