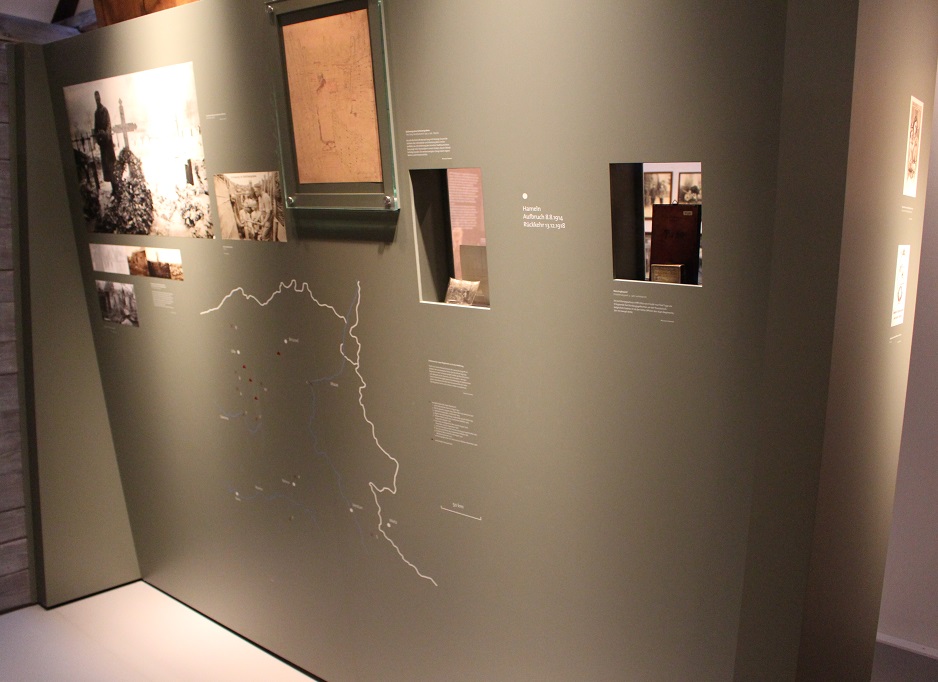 Inside the trenches, © Museum Hameln

Place of origin and year unknown

An artillery round hit Otto von Finckh only five days before the ending of the war, in rearguard action at the French-Belgian border. He was the last officer of the 164th Regiment to die in battle.

Stations of the 164th Regiment in the First World War

After only one month, the German attack ground to a halt. The Regiment was positioned in trenches at various places on the Western Front. Even large battles – for example at the Somme and in Flanders – brought no resolution despite horrific casualties. In the late summer of 1918, the German army was near to collapse. The regiment was forced to withdraw further and further.

Battles fought by the 164th Regiment

Grieving soldier at the grave of a fallen comrade

Friedrich Wilhelm Meyer-Hermann was positioned with his regiment in the small northern French village of Villers-au-Flos. He and all of his officer comrades were killed when a stray shell hit their accommodation on 19.10.1916. He was buried in the neighbouring district of Ruyaulcourt. The family learnt from the photos in sad certainty: One of the two brothers who joined the war in 1914 was dead!

Illustration of a trench, © Museum Hameln

Illustration of a trench

Since there was often no movement at the front for months, the soldiers extended the dugouts and trenches with increasing skill. The drawing by the Hamelin city architect Zang shows a comrade in a trench where the walls have been reinforced. The extensive aisles have their own names and direction signs. 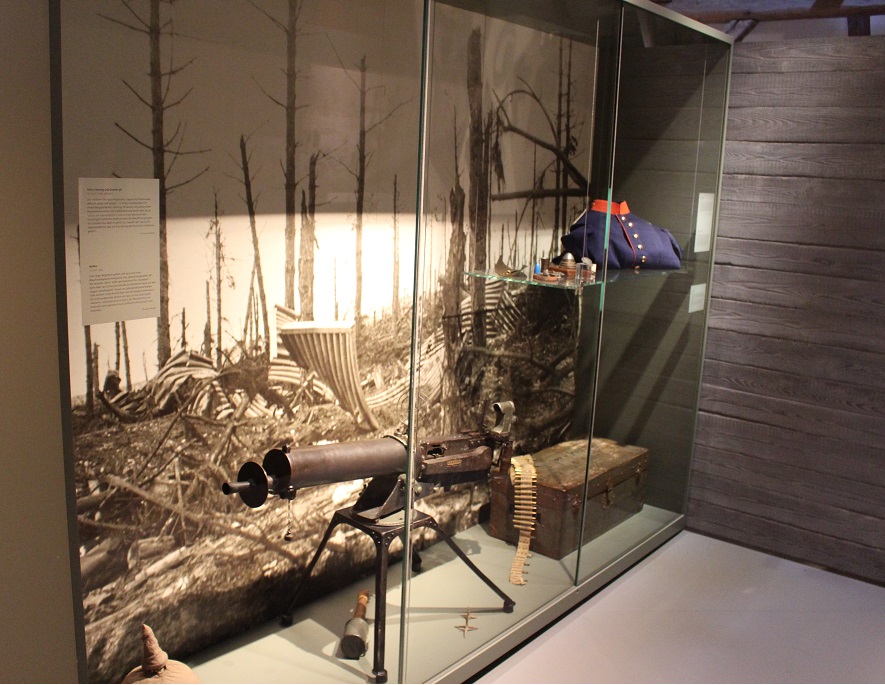 Inside the trenches, © Museum Hameln

Both sons of the Meyer-Hermann family, who fought at the front, brought home shrapnel and bullet cases as souvenirs to Hamelin. Some of these objects were made useful as a letter opener, schnapps glass or pen tray. Others remained as macabre reminders of the war, during which the brothers were killed.

There were no standardised infantry uniforms during the German Empire. The 164th Regiment could be recognised by its red cuffs with white sleeve panels showing a blue seam, and white shoulder panels. The “field grey” uniforms worn in the war were more strictly standardised, but a single uniform for all infantry soldiers was not introduced due to lack of materials.

Officers usually had such chests for their belongings made individually.  This one comes from the time when Friedrich Wilhelm Meyer-Hermann was transferred to the Infantry Regiment No. 92.

In contrast to the photographs evidencing the death of their son, the chest was not in the possession of the family.  It was noticed in the 1980s by a collector from Hamelin at a militaria dealer.

The soldiers of the 164th Regiment wore the officially named “spiked helmet” in battle and manoeuvres with a beige-coloured overcoat, sometimes with sewn-on regimental number. However, the headgear offered hardly any protection from shell fragments and was replaced in 1916 by the new steel helmet, type M1916. For weaponry, the soldiers carried the “98 Rifle”, introduced in 1898 which, slightly modified, remained part of the equipment of the German infantry until 1945.

The 164th Regiment possessed a machine gun company from 1913. “Machine Gun 08” – the variation “08/15” stands proverbially for “standard” – could “rain down” over 500 rounds per minute in indirect fire on the opponent. Crow’s feet placed in the terrain could merely hinder an enemy thrust. The stick grenade was among the equipment of the infantry from 1915. It was ignited by a string fuse on the handle end and exploded after two seconds, according to the grip label.