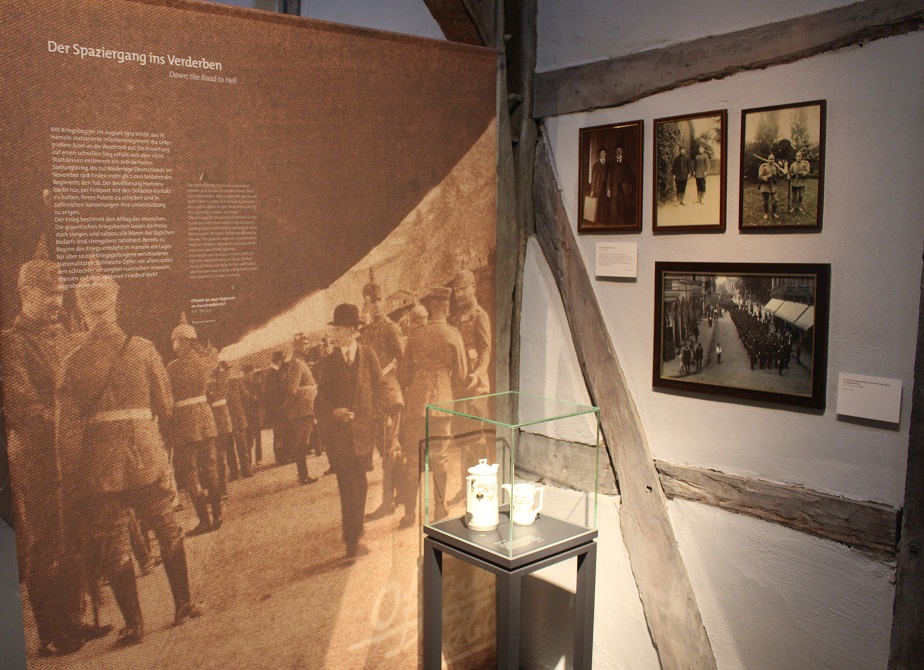 Down the Road to Hell

The 164th Infantry Regiment stationed at Hameln goes to war on the West Front. With high expectations, they assume the war would quickly end in victory. But instead, a gruesome war ends in defeat in 1918.  More than 2000 of this regiment’s soldiers are killed.

The only way for the people of Hameln to stay in contact with their soldiers is by army post, sending parcels and holding meetings to show their support. All aspects of life are affected by the war. The gigantic expenses incurred cause massive inflation.  Almost all necessary daily provisions are strictly rationed.

A camp for over 10 000 prisoners from all different nationalities is set up at Hameln. Many of them, especially the less well looked after Russians have to be buried at Wehl, which later becomes a proper cemetery.

Officers of the 164th Regiment at Hamelin railway station

Departure of war volunteers after a church service at the cathedral

Dear boys and girls in Hamelin and the surrounding area!

[…] Show yourself to be worthy of the heroic deeds of your fathers, brothers and other relatives. You are commended today for this:

We wish to assist in the war effort and are collecting for the War Assistance Volunteers!

Appeal of the General Committee for War Assistance Volunteers, May 1916 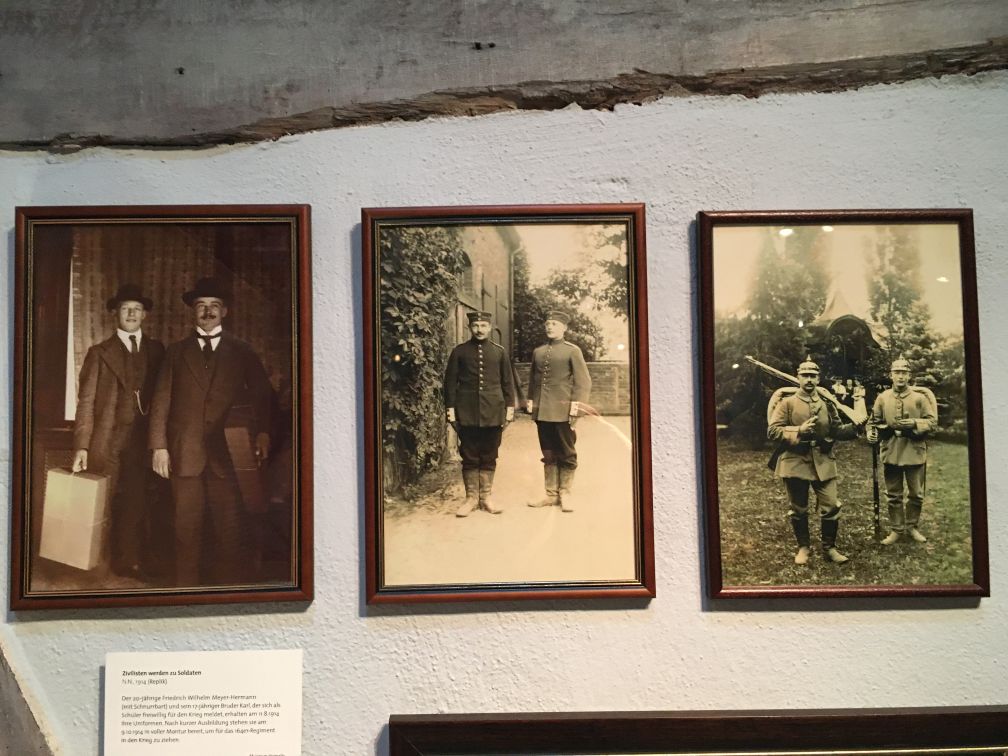 The 20-year-old Friedrich Wilhelm Meyer-Hermann (with moustache) and his 17-year-old brother Karl, a school pupil who volunteered for the war, received their uniforms on 11.8.1914. After a short period of training, they stand fully uniformed on 9.10.1914, ready to fight with the 164th Regiment. 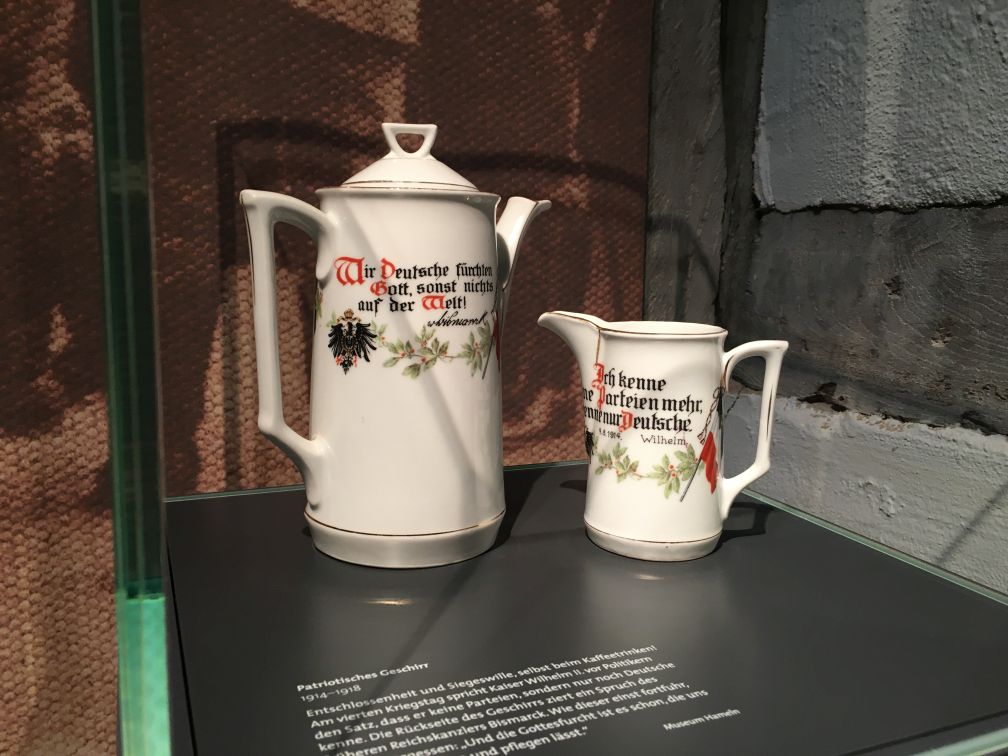 Determination and the will to win, even whilst drinking coffee! On the fourth day of the war, Emperor Wilhelm II uttered the phrase in front of politicians that he didn’t recognise any parties, only Germans. The reverse side of the crockery is decorated by a saying of the previous Imperial Chancellor Bismarck. It seems to have been forgotten how he once proceeded: “And it is the fear of God which makes us love and maintain peace.” 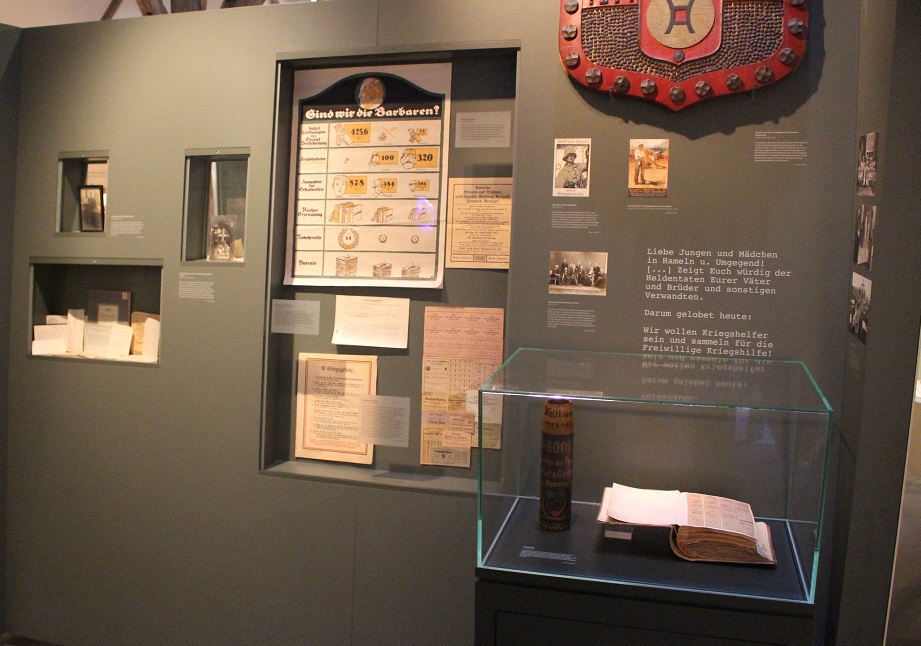 Care of the wounded in Hamelin

In the course of the war, a number of military hospitals were set up in Hamelin. Many Hamelin citizens worked there as care staff and thus experienced firsthand the terrible consequences of the war. Despite pleasant trips on the Weser, the wounded soldiers knew that those who recovered without lasting injuries must soon return to the front!

A “Fatherland Meeting” took place in September 1915 on the old parade ground (today Bürgergarten) for the “brave heroes” at the front. Each citizen could buy a spike for 10 marks, which was driven into the shield. The donor’s name was additionally recorded in the pigskin book. Many viewed this as their patriotic duty: Mayor Jürgens is entered as the eighth donor; in total 1,134 persons participated.

“The man with the steel helmet”

Nine times the state borrowed money from its citizens by issuing war bonds to pay for the war. Only in case of victory and subsequent reparations would it be in a position to repay it. The advertisement for the occasion of the 6th war bond issue in March 1917 is the best known illustration of the war. After the defeat in 1918, it was used above all by opponents of the Weimar Republic.

Call for donations for prisoner of war German soldiers

Under the auspices of the Red Cross, a civilian mobilisation commission was formed in Hamelin from local associations to coordinate all non-military workers for the war effort. Men who were too old to fight were active here. Whereas previously they hardly possessed rights of codetermination, e.g. as members of the “Women’s Association for the Fatherland”, opportunities for women to occupy leadership positions now arose.

Many factories had to divert their production into goods important for the war effort. Burkart & Günther GmbH, which supplied automobile bodies to the Hamelin automotive industry, also produced munitions from 1914. The jubilee item was presented to the company owner in 1917. Finally, it was used as a flower vase.

Picture atlas of battles in the First World War

Though the war claimed ever more victims, those at home were enthusiastic about pictures from the front. Many large paintings documented the battles, in addition to photographs and field postcards. Many a Hamelin citizen probably hoped to find pictures of the 164th Regiment in this volume, which lay in the trenches of Artois for more than a year, from 1915.

The Hamelin city architect Otto Zang died as a lieutenant of the 368th Infantry Regiment on 17.4.1917. Only eleven days later, the Dewezet published his last field-post letter, “though the hero’s death has not yet been directly confirmed.” Even during the war, the newspaper called for photographs and information on “fallen heroes” to be entrusted to Hamelin Museum for a later remembrance book. The photo of this grave was also found there.

The photograph of the 20-year-old as a greeting to those at home may have been taken in the resting quarters of the 164th Regiment in Mons-en-Pévèle. The Head of the Supreme Command, Paul von Hindenburg, visited the regiment there on 20.9.1918 to strengthen the morale of the soldiers. Hindenburg already knew at this point: The German troops were defeated, the war situation was hopeless.

Field postcard with citation of Wilhelm II, from 6.8.1914

Fear and sadness of relatives during the war The longer the war lasted, the more it became a propaganda battle to maintain morale despite the deprivations. French and English propaganda referred to the Germans as “barbarians” and “Huns”. The poster above was a reaction to this: The opponents are represented as uneducated and backwards, the Germans as a culturally superior nation.

Assistance for the Fatherland

Willi Becker from Hamelin had to look for work in March 1918 with the organisation, Assistance for the Fatherland. Except for farmers and forestry workers, since the end of 1916 all men aged from 17 to 60 could be obliged to do likewise. In desperation, all workers were called on to aid victory. Desired side effect: Dissatisfied and politically disagreeable persons could be better controlled in this way.

The citizens of Hamelin had to limit their private consumption to the absolute minimum. According to the “10 war directives” for an economical lifestyle, no food and no raw materials should be wasted: No more snacks – this is also good for one’s health!

Such instructions must sound like mockery, since from the outbreak of war everyday products had increasingly been rationed and were only available with ration coupons. How could one lead a wasteful lifestyle with 1/4 of an egg – the corresponding ration coupon comes from 1917? Furthermore, all useful materials still in the household should be donated to the front: “Donate everything! Donate now!” demands the call for non-ferrous metal donations in 1917.