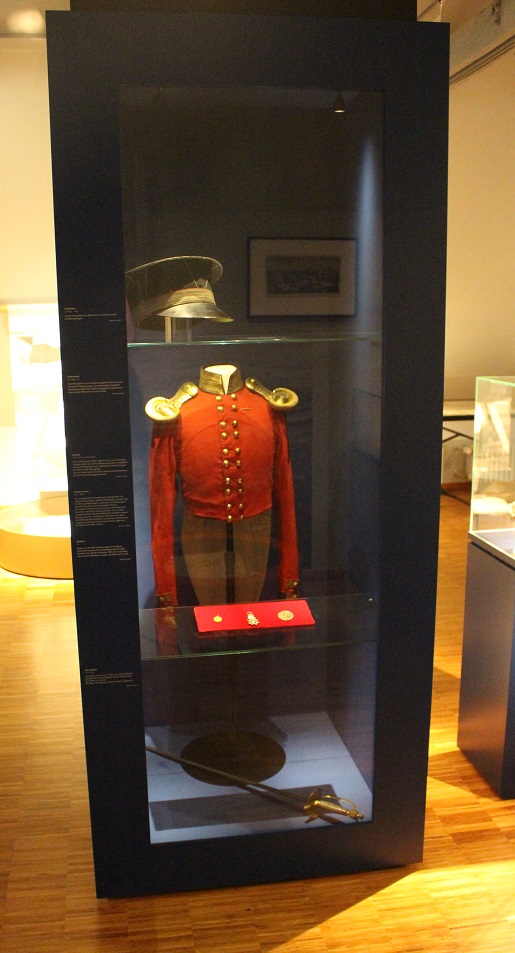 Such hats were worn by officers of the infantry and cavalry.

The kollet belonged to the 6th Bremen Infantry Regiment. It was worn by an officer.  The expensive epaulettes are made of silver. The buttons are imprinted. A wreath with the number six and a crown can be seen.

On the front side are the later George V and his bride Princess Marie of Saxony-Altenburg. The medal is imprinted for the occasion of the marriage of George to Marie by the city of Hanover in 1843.

George V presented his wife with a castle at Nordstemmen, which was named Marienburg after her.

The Royal Guelphic Order was established in 1815 by Prince Regent and later King George IV. The statutes which regulated the bestowal were changed by George August I in 1841. Now there were five different classes.

The fourth class for military swordsmen is represented here.  The medal is made of silver. It is decorated with the rearing horse and motto of the Guelphs: Nec aspera terrent – undaunted by adversity. Following the defeat of the Kingdom of Hanover at the Battle of Langensalza and annexation by Prussia in 1866, the decoration was no longer conferred.

George V was the son of Ernst August. He was just as conservative as his father. His reign was a time of stagnancy for Hanover. In 1866, he was forced to abdicate from his position as the King of Hanover and went into exile in Austria.

The sword was worn by an officer of the line infantry. The stud is foldable.  The letters GR can be seen on the blade.

The sword was exchanged by Hamelin Museum in 1989.

The tunic is equipped with a rank star: A pyrotechnical specialist of the 1st artillery battalion wore it. The battalion number is embroidered on the epaulettes.

The belt was worn by an artilleryman, as both the cannon barrels show.  Were cartridges transported in the belt pouch?

The medal was made in 1868 for the occasion of the silver wedding of George V and his bride Princess Marie of Saxony-Altenburg. At this time, the couple had already lived in exile for two years. The benefactor was the George Society. It maintained the Guelph tradition in the now Prussian Hanover.

The medal was made only a few days after the Battle of George V. It could be awarded to any soldier who had participated in the battle. The date recalls the day of the Battle of Langensalza: 27th June 1866.

In total, around 20,000 such medals were awarded. The former Hanoverian soldiers were able to continue wearing them after they had entered Prussian service.

Tow is produced from the hackling of linen, hemp or jute. It consists of short fibres which can be pressed together, thereby gaining a cotton-like consistency. In this form, the tow can be used for cleaning or sealing.

The badge belonged to an artillery shako. 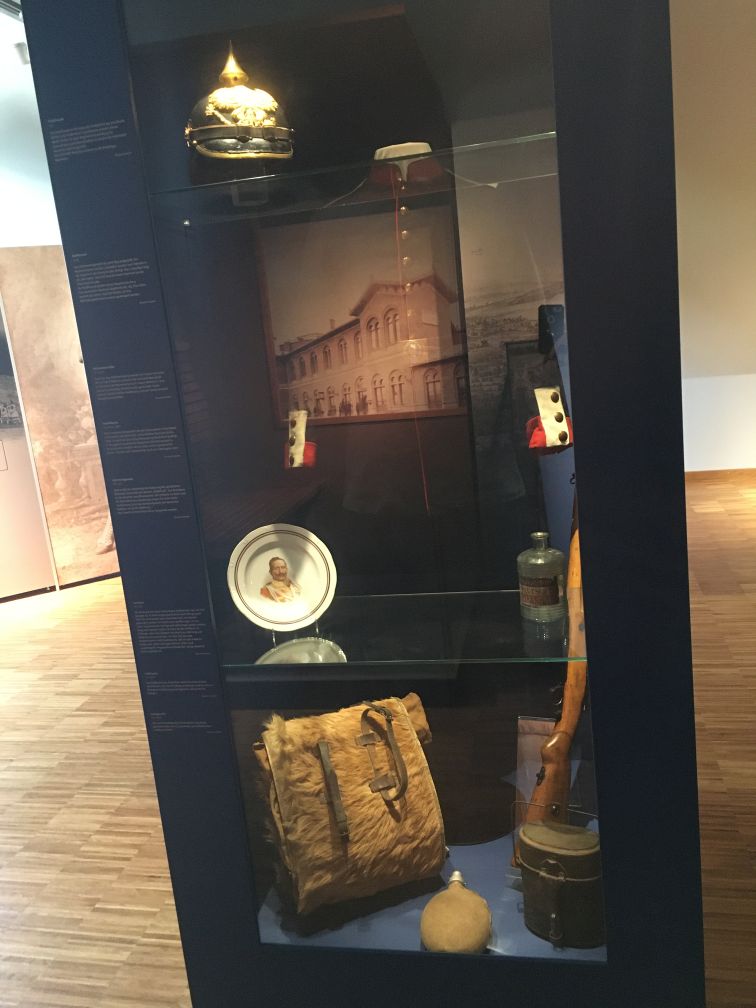 The spiked helmet is to this day an icon of the Prussian military and often used in caricatures. This model was used in the 164th Regiment by non-commissioned officers and units. It was manufactured in the helmet factory of Alexander Dahl.

The inscription Waterloo recalls the defeat of Napoleon.

The Infantry Regiment 164 was set up in 1897. The regiment staff and the 3rd Battalion were relocated to the army barracks in Deisterstraße in Hamelin. The 2nd  Battalion followed suit a year later. Its destination was the new barracks in Scharnhorststraße.

The uniform jacket belonged to a captain of the 4th Hannoverian Infantry Regiment No. 164. The lining is made of linen. A division number for clothing is stamped on the back.

Following the so-called unification of the Empire, the new rulers became the object of identification and thus also of the collector’s passion. Wilhelm II and George V may have stood harmoniously next to each other on many a living room cabinet. Other families remained loyal to the Guelphs and oriented to the Hanoverian royal family.

This ink was made by the Eduard Beyer ink factory in Chemnitz. The proud title “Indestructible German Imperial Ink” is not only a bold declaration of notable quality. It is at the same time the expression of German self-confidence in the Empire. Finally united under a dynamic emperor – indestructible can also be read as undefeatable.

In 1898 this type of rifle was approved by the Prussian authorities and received the name “Model 98”. Its speciality is the repeat-lock closure system. The simple function and robustness of the rifle type led to it becoming widely used. It was the standard rifle of the German soldiers in the First World War.

The rifle was manufactured by Simson & Co. 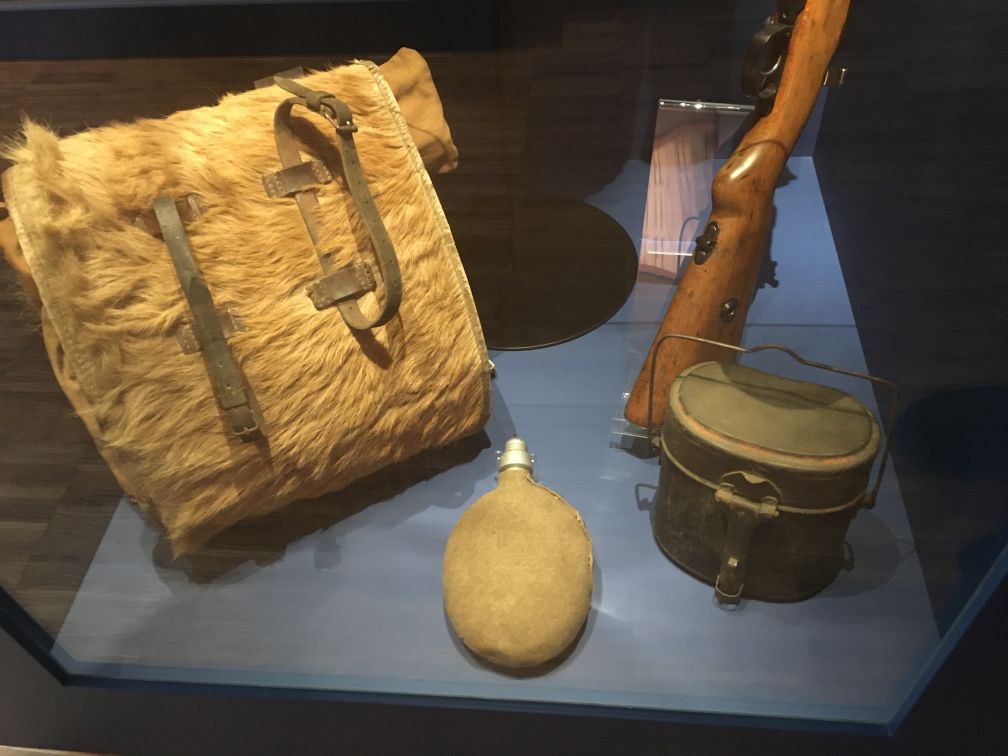 The rucksack has a rectangular wooden frame, which is covered with fur. It was also colloquially called an ape. A cover or cloak can be bound over the narrow end. The inside is fabric-covered. Tent pegs and poles could be placed in an extra pocket.

Such knapsacks were used by the artillery. The soldiers were supplied with ammunition, food and clothing in the field camp. In case the base camp system was not functioning, the modern soldier should have been able to fend for himself. Ingenious carrying systems were required for this, since the supplies had a high weight.

The canteen made of aluminium is closed with a cork. It is covered with felt to protect it from blows and provide a little cooling in the summer.

The iron cookware is enamelled and thus to some extent a luxury version of military, mobile cooking equipment.