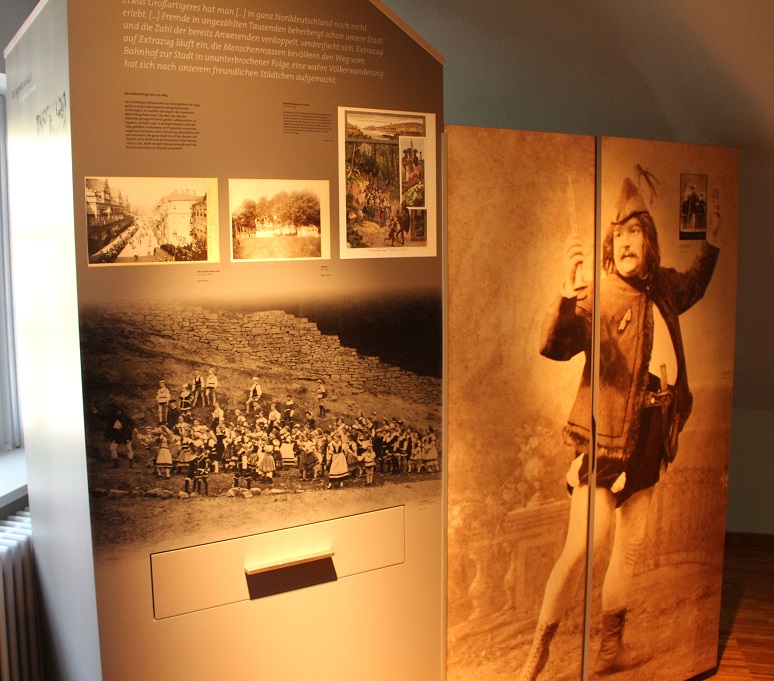 The 650-years jubilee oft he Piped Piper myth is a great spectacle and attracts many tourists, © Museum Hameln

Already in the 18th century it was recognized that the story of the Pied Piper in Hameln could attract tourists. The legend is used to make the city more interesting for visitors. In fact, people have been coming to Hameln for centuries to learn about the legend. In the 19th century, the famous figure became the driving force behind tourism. Brochures, picture cards, postcards and souvenirs with the image of the pied piper are created. Companies and businesses use the figure as an advertising medium. In 1884, 1934 and 1984, great anniversaries are celebrated in memory of the year of the legend.

The celebrations often serve political purposes. The image of the seductress making music is also often applied to people from politics and contemporary history. It still serves as a symbol of political manipulation and false promises.

All of northern Germany has never yet […] experienced something greater than this. […] Strangers in uncounted thousands are accommodated in our city and the number of people in attendance has doubled, trebled. Special train after special train rolls in, the throng of people fills the way from the railway station to the city in uninterrupted procession, a true exodus has made its way to our friendly little city.

The Pied Piper festival of 1884

The two-day jubilee celebrations of the 600th anniversary of the legend became a major event, which was also followed outside of the region. It marked the beginning of modern “Pied Piper tourism”. The idea of marking the year of the Pied Piper legend with large jubilee celebrations arose late. In just a few weeks, the hastily formed festival committee put together a programme, organised costumes, a festival procession, evening balls and fireworks. The whole city was actively engaged. The poet Julius Wolff and composer Victor Nessler were invited as guests. Before the festival weekend, the fountain monument at Thiewall was unveiled.

The Pied Piper festival in Hamelin

The painter Carl Grote accompanied the Pied Piper jubilee with paintbrush and quill. Based on his drawings, lithographs, coloured engravings, picture collections and festival impressions were made, which were sold individually or in folders. Many of his motifs were later printed on postcards. His splendid representation of the Pied Piper poem by Karl Simrock from 1844 became well-known.

The Pied Piper jubilee was a lucrative business opportunity. Entry to the extravaganza at the fairground had to be paid for (also by children) – but the many participants in the procession received a discount.

However, the revenues were subject to considerable expenses. The hiring and production of the costumes, and their cleaning and repair after the performance, cost a lot of money.