The building of railway tracks was beneficial for the tourism industry in the Weserbergland, © Museum Hameln

The Waters of Bad Pyrmont are renowned all over Euorpe in the 18th Century. But initially, tourists by-pass the Weser Hills, preferring the dramatic landscapes of the Rhine and Harz. As recuperation and rest gain importance the Weser Valley becomes popular. Steamships and the railway lead the way in the development of the whole region. The “United Weser Steamship Company” starts out as a carrier agency. Many emigrants leave the Old World via the Weser. Pleasure holidays as bi business really take off when the Hameln-Altenbekener Railwayy starts competing with the carrier agency in 1872. Steamship journeys on the Weser develop into a main tourist attraction.

The very well-equipped railway building in Hamelin has two waiting rooms, a non-smokers’ room and a ladies’ room. The reception hall is at the level of the platform and so offers an attractive view into the still unspoilt valley.

After construction of the Löhne-Elze stretch in 1875, the railway station now became a so-called “wedge station”. The reception building stood between the two railway platforms, where the lines led in different directions.

Commercial shipping on the Weser was marked by constant new, bold beginnings and many setbacks. The Hamelin businessman Wilhelm Lampe managed passenger shipping for some decades before Norddeutscher Lloyd closed down operations on the Upper Weser in 1873. One year later, Lampe established the “Upper Weser Steamship Company” himself. His company acquired two steamships, the “Armin” and “Germania”. He did not succeed in making a profit, however, and the company was wound up in 1876. The “New Weser Steamship Company” took over operations and employed a modern steamship, the “Prince Bismarck”. In 1882 this company was also liquidated.

Only the initiative of the mill owner F.W. Meyer, who combined shipping with the slowly developing tourism sector, met with lasting success. His innovative ideas, entrepreneurial spirit, and the fact that he could support the passenger shipping at the beginning with profits from other economic activities, were decisive.

Dining room of the steamship “Hermann”

Passenger transport now took a back seat. It was no longer about getting quickly from one place to another, or transporting large groups of people such as emigrants. It was instead about entertainment, luxury and elevated lifestyle – about travelling as an enjoyable pastime.

In addition to the elegant dining room, the wealthy passenger might find a small library, newspapers, cards, chess and other games.

Captain Willi Franke stands proudly on the bridge. The helmsman Wilhelm Lampe is a member of his team (2nd from right).

The steamship was built in 1888, and it arrived on the Weser in 1906. The chimney is a little crooked. On all steamships, the chimneys could be folded down to pass under low bridges.

On the deck of the “Emperor Wilhelm”

The “Emperor Wilhelm” was built in 1899/1900 and was used directly on the Weser. Like the “Prince Bismarck”, it was a so-called saloon steamship.

The decorated rowing boat – the seagull – is being brought along for the journey through the hills. Celebrating on the deck are Lina Meyer, her brother Hans Meyer(-Hermann) and guests.

Hann. Münden was reached one day later. The departure from there can be seen here.

The “Crown Prince Wilhelm” arrived in Hamelin on 7th May 1907 and was used by the “Upper Weser Steamship Company”.

Senator F. W. Meyer (centre, light-coloured waistcoat) is celebrating his golden wedding anniversary here with his wife, children and grandchildren. In uniform on the right is Max Witte, a relative of the family. He was killed in the First World War after only a few weeks.

The “Count Moltke” was built in 1888 and arrived on the Weser in 1906. Here, the ship stands at the jetty ready for a school trip.

The paddle steamer came into service in 1877. A steam engine drove the paddle wheels. Here it stands in front of the Werder [small island] mill.

People can make a difference!

Friedrich Wilhelm Meyer came from a Westphalian family of millers and traders.  In 1874, he bought the so-called Brücker mill and moved with his family to Hamelin. He immediately began to modernise the mill and additionally acquired the derelict port mill. He developed his enterprises with great business acumen. At the end of the 19th century, he was the owner of the largest mills in Europe. His family was among the very wealthy of Hamelin.

F.W. Meyer did not limit himself to the prosperity of his family and businesses, however. With broad interests and looking far beyond Hamelin and his own lifetime, he provided significant developmental impetus. Among other things, Meyer worked on the construction of the Hamelin harbour, the Eder dam and Mittelland Canal. In 1903, as a result of his accomplishments in promoting the fortunes of the city of Hamelin, he was appointed as a senator. In addition to his very demanding work, he held more than 16 management board seats and countless honorary posts.

The golden wedding anniversary of Friedrich Wilhelm and Louise Meyer on 25th September 1912 was celebrated in style at their new villa on Pyrmonter Straße. The citizens of Hamelin were entertained with military music and fireworks.

The saloon steamer “Brunswick” commuted back and forth daily between Hamelin and Polle. 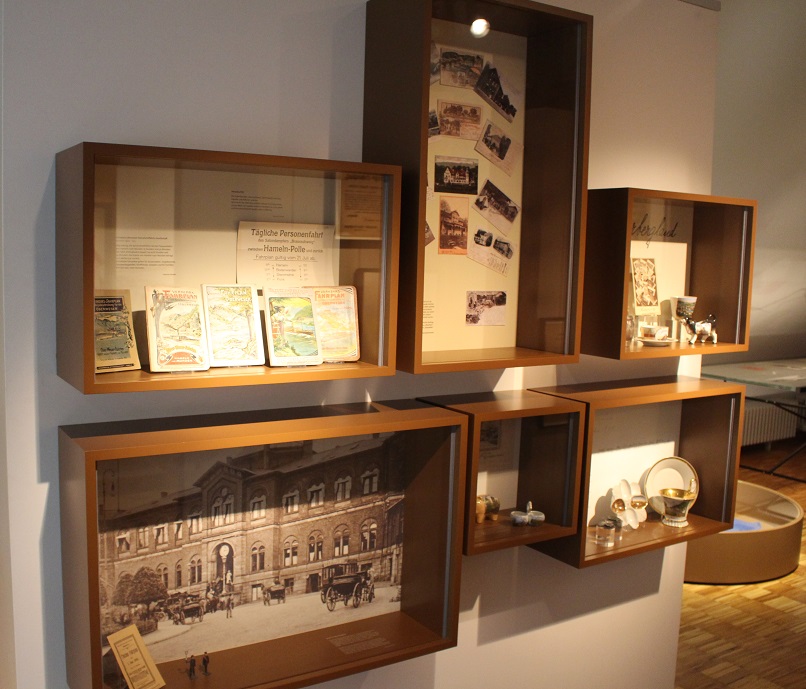 Travel in the Weser Hills

The Weser Hills railway network connection did not only have advantages for trade and industry. Now travellers and tourists could more quickly and comfortably reach the region. Passengers travelled comfortably in a closed carriage, free of the weather and road conditions – and also far more cheaply than before!

Travel for the sake of enjoyment remained a status symbol, however. Discerning tourists had access to a first class waiting room in Hamelin, which of course was subject to fees. The elegant, stylish railway station met the high expectations of foreigners. Railway travel was modern and displayed that one moved with the times and was sophisticated.

Summer resort in the Weser Hills

Tourism developed in the Weser Hills as holiday trips became popular. Ever more travellers wished to stay for longer. In around 1825, there were twelve guesthouses offering guestrooms in Hamelin. By 1900, there were 40. Further guesthouses were grouped around the traditional houses, such as the hotels “Zur Sonne” or “Bremer Schlüssel”, predominantly near the railway station and steamer landing stage.

Local inns were also opened near to romantic trip destinations, such as the “Weserlust” house lying directly on the Weser, “Dreyers Berggarten” or the “Felsenkeller” hill restaurant on the slopes of the Klüt.

Klüt as an excursion destination

At first, the terrain of the Klüt was impassable. Thanks to the collective efforts of Hamelin citizens, paths were created, beautiful viewpoints made secure and benches placed. G.G. Kleinschmidt made funds available with which the hill was gradually redesigned into a recreational area. This civic engagement laid the basis for the soon-to-be very important tourist infrastructure.

The travellers spent pleasant days in Hamelin. They wanted to be reminded of this time once back home and so bought a souvenir. It could be shown to friends and relatives in a prominent place, but also demonstrated that one could afford to travel for pleasure. And that one could buy an expensive memento: The souvenirs of this time were high-quality, intricately made and thus expensive objects.

The imprinted crockery was used extremely seldomly. Which is lucky – since the motifs can still be seen wonderfully!

The healing springs in Pyrmont

The beginnings of tourism in the Weser Hills were closely linked to the spa facilities at Pyrmont. Distinguished society met there at the end of the 18th century. Famous guests alighted here to maintain their health. The spa visitors moved outside of their otherwise strict social class boundaries and enjoyed this freedom. Many a new idea or unfamiliar political view was taken away by the travellers when they left the delightful location.

The curative water possesses a high and also international level of name recognition.From an early stage, it was bottled and widely distributed. The glass bottles were equipped with a seal and were sold expensively as “Pyrmont Water”.

These seals were found during excavation at the Leisthaus in 2009.

After Napoleon had the fortress on the Klüt demolished, the hill was freely accessible. Slowly it developed into an excursion destination for Hamelin citizens, who knew how to value the view of their city, the pure air and peace and quiet.

In 1843, the Klüt tower was constructed from stone belonging to the former fortress. Looking down from it, one could see the whole valley. The Klüt tower soon attracted guests from far and wide, and it became a tourist attraction. Many visitors left their names on the entrance door. The oldest entry dates from 1855.