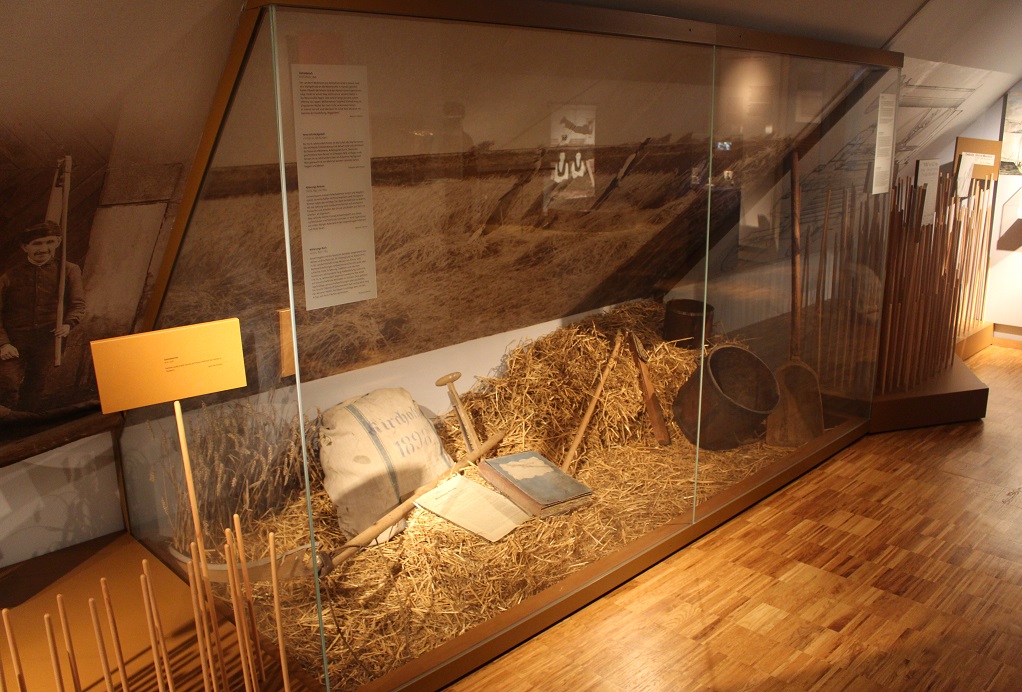 Agriculture is still the basis of livelihood in the 19th century, © Museum Hameln

A Breath of Fresh Air

Agriculture still forms the basis of rural communities. Not much has changed since the Middle Ages. Crop failure often causes famine, as in 1817 and 1847. One of the major problems just before the French Revolution is the population explosion. The leaders fear major impoverishment, but they fear civil disturbances and riots even more, due to the suffering population.  Comprehensive agricultural reforms are implemented to help feed the people and ensure long-term food supplies.

Economic changes come very slowly to the Weser Hills. But by 1900, devastating famines are a thing of the past.

The workers are not standing in this order in front of the barn gate by coincidence. The photo was taken during the exact period in which agricultural work was changing. It is trying to preserve and document the old, traditional work methods.

The processing of the grain after being brought in, namely from threshing to bagging, is represented. Possibly the picture was taken on the Hakesches Gut in Ohr.

The Lücke family mows barley in their field (“Auf der Fahlte”) in Tündern.

The farmer Beckmann from Kirchohsen would have delivered his meal grain to the Weser mill in Hamelin in this sack. Though the linen sack bears the name of its owner, it did not find its way back, but remained lying in the Weser mill. It was used there for some time, lastly clearly as a rag. As a long-serving miller, master miller Siegfried Schmidt may have wanted the sack not to go to waste. He took it and in 2006 gave it to the museum for the exhibition “rye bread”.

1st third of the 20th century

Until the 16th century, the sickle or short scythe remained the most important harvest tool. Only thereafter did the scythe gradually become established as the more effective work tool. So that the cut corn fell better in swathes, many scythes in the 19th century had a wooden rear frame. It was used primarily for short crops: barley, rye and wheat.

Non-free farmers had to work and pay taxes. They did not work on their own land. Agrarian reform had the important goal of changing these relationships. On payment of a sum of money, the farmers could purchase their freedom and receive the land they worked on as their property.

In 1864, the cottager Conrad Schweinebarth from Dörpe paid 173 imperial thalers and five good groschen. He became the owner of seven acres of farmland in Coppenbrügger Feldmark and a free farmer.

Farmers’ weather lore is still today a popular subject of jokes and caricatures. However, its background was serious: Knowledge of climate and weather developments in agriculture could make the difference between a good or a bad harvest. Experience, tradition and intuition determined field sowing and harvests for centuries.

Only in the 19th century did farmers begin to base their work on scientific methods. This included keeping regular, exact records of the weather. The Oldendorff family documented the weather in Aerzen for almost forty years. They could optimise the cultivation of their fields on this basis.

1st third of the 20th  Century

After threshing, it was necessary to free the grains from husks, ears and weed seeds. To achieve this, the grain was tossed into the air by a draft using winnowing fans. The wind carried the light components away, while the heavy grains fell back down. However, a grain shovel was also required to place the grain into sacks.

Until around 1900, the shovels consisted entirely of wood and were usually made of one piece. Work tools were expensive: If a shovel broke, it was repaired if possible.

The threshed and cleaned grain was measured not by weight but by volume.  It was poured into wooden capacity measures. The units of measurement are “himten”, “bushel” and “malter” (1 malter = 3 bushels = 6 himten). The himten can be subdivided into “matzen” or “spint”. One himten corresponds to around 20 kg of rye, 18 kg of barley, 13.5 kg of wheat or 12 kg of oats.

Each territory had its own bushel measure, which had to be newly calibrated at predetermined intervals. The labelling of state and year were usually branded on the inner base of the capacity measure. In 1868, the new Prussian bushel of 50 litres was introduced and remained valid as an imperial measure until 1884.

1st half of the 20th century

After the harvest, the grain usually had to be dried, and then it was threshed. Often a number of men stood on the barn floor in a circle and beat the grain in turn with flails.

A flail consisted of two sticks connected by a leather strap. The thresher held the longer part in their hand and beat the grain rhythmically with the short end. The formulation “to eat like a barn thresher” is a later resonance of the hard physical work.

This method of threshing remained customary until well into the 19th century, though horse-capstans or water power-driven pounding were already known.

The mill facility on the Werder [small island]

After the surrender of the fortress, the demand for milled grain decreased sharply. Due to the poor income situation, the mill buildings were no longer modernised.  In 1863, the timbered building was demolished.

Feistkorn trained as a porcelain painter in Göttingen.  The rich detail of the painting and choice of colours are a sign of this. The slanting horizon is exciting, giving the picture an unusual dynamic.