The common interests of the middle classes, their similar values and ideals of order culminated in their political engagement. A burgher became the mayor of Wehrbergen – he devoted himself to the fortunes of the place.

The enthusiasm among the middle classes for a united Germany was expressed, among other things, in it becoming fashionable to possess an etui or other everyday items with a picture of Bismarck.

The influence of the guilds decreased greatly and they were dissolved. No wonder the crest of the Hamelin shoemakers’ and tanners’ guild was placed in the museum: It manifested a culture in decline.

Rise of the middle classes

George Pflümer realised many of the burghers’ rising aspirations: He was extremely successful economically. His business contacts reached across Europe to the USA and Ceylon. His villa in Hamelin proclaimed this success. He was highly regarded in the city community.

Pflümer was interested in history and created a historical collection. His main focus was on Hamelin coins. He also became the first curator of the Hamelin Museum due to his knowledge and interests.

The middle classes began to take an interest in history. This applied to the history of their family, their city, and of the Empire.

The influence of the burghers on respective historical events was the main focus of their interest. For good reason, it was usually the burghers who established the museum in a city. Master craftwork was often on display, as well as reminders of special events and the legacies of well-known burghers.

Clothing, appearance and behaviour distinguished the members of the middle classes. Only those who had servants could afford the required expenditure.

Members of the middle classes also distanced themselves from the poorer social classes in this way.

Walking sticks were among the accoutrements of fashionable men in the late 19th century. They were purely decorative and one could not prop oneself up on them. This stick is a speciality: The knob consists of a distorted face. It was recognised by contemporaries as the caricature of a Jew. The owner of the stick covered the head with his hand. However, if he met someone with whom he was in political agreement, he would let the head be seen.

The hidden political opinion demonstrates how anti-Semitic views were not yet socially acceptable everywhere.

The stick belonged to a Hamelin family and was placed in the museum in 1990. 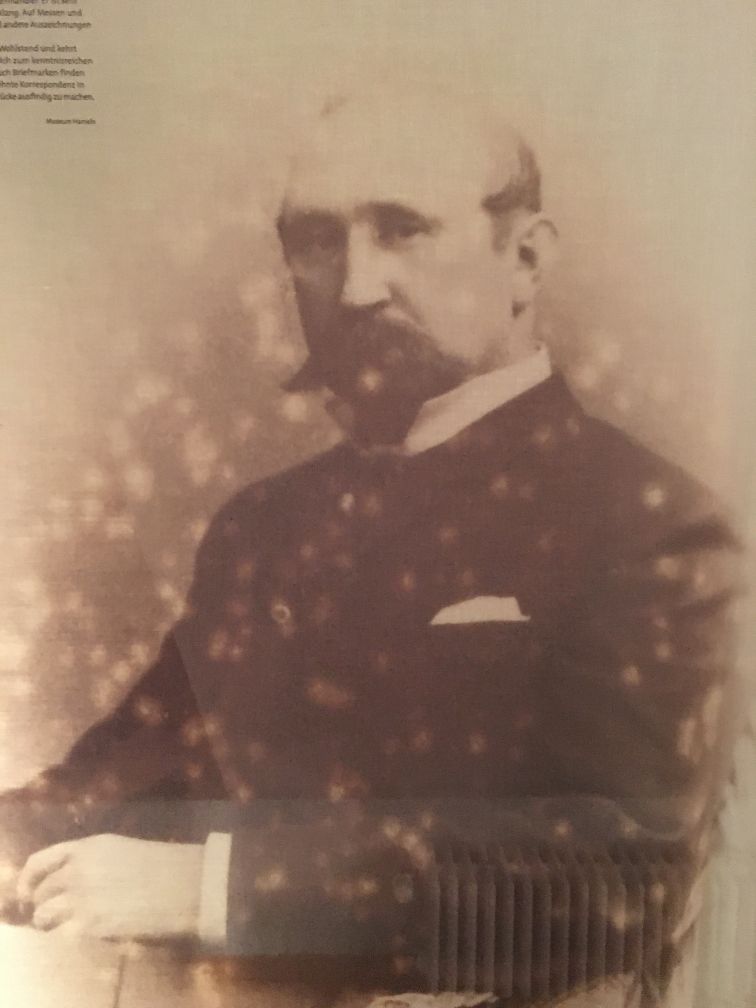 George Pflümer was born in Hamelin in 1845. His father was a teacher who was strongly interested in the natural sciences and was an enthusiastic collector.

George trained as a businessman and worked in many European countries as a wine dealer. He was very successful, and his products were popular. He was awarded medals and other distinctions for the quality of his goods at trade fairs and exhibitions.

Pflümer became wealthy and returneds to Hamelin. He became a knowledgeable collector: Hamelin coins and also stamps interested him. He maintained extensive contacts across the whole of Europe to find especially rare items.