The increasing social influence of the burghers also changed the lives of middle-class women.  Their range of tasks was clearly defined: household and family. The organisation of such a “business” was however time-consuming.  The efficient housewife performed calculations and ensured that the existing means were used to best effect. She supervised the servants and took care that her husband came home to find things organised each evening.  It was unquestioned that he was the head of the family and had the say.

However: A woman could also work independently – the example of Theodore Niemeyer demonstrates this. However, such a career remained the exception.

The Song of the Bell
indoors ruleth
housewife so modest,
The mother of children,
And governs wisely
In matters of family,
And maidens she traineth
And boys she restraineth,
And goes without ending
Her diligent handling,
And gains increase hence
With ordering sense […].

Beginning of the 20th century

The housewife had many duties. The leadership of a large household was often a demanding task which could only succeed with the help of servants.

Servants had to be continuously available. In the servants’ regulations of 1913, it is stated: “The servant relationship is by nature a relationship of loyalty and dependence requiring the complete personal dedication of the servant.” However, servants were also a status symbol and for this reason, the bell pull is pompously rather than functionally designed. It was donated to the museum in 1941 by Mr Schneidewein.

Parents and relatives, as well as school friends, made entries in the poetry album of Dora Hoffmeister. In this album, E. Pflümer has written a dedication, but Adele Löwenstein has also left behind a little saying.

Jews were well-integrated in Hamelin in the 19th century. They belonged to the community. Around the end of the century, however, anti-Semitism slowly began to become noticeable. Adele Löwenstein remained unmarried. In 1941, she was forced to move into the so-called Jewish House in New Marktstraße 13. Presumably she was deported to the Warsaw ghetto on 31st March 1942.

Middle class women did not idle in their free time. Education was also of great importance here: This included opera or theatre visits. Music at home was also part of daily education for the burghers.

Interest in history is directed towards everyday customs and clothing. Costume is viewed as a relic of old times and thus as valuable and worth preserving. Sometimes “traditional dress” is created as such when photographers or researchers begin to take an interest.

End of the 19th century

Using their own hair, young middle-class women prepared decorative items for their future man. Such gifts corresponded to the romantic ideal of married love, as opposed to the traditional marriage of convenience. But reality usually did not correspond to this perfect image.

This jewellery was bought in 1916, however, for the benefit of “warriors and their surviving dependants.” It was clearly industrially produced.

The position of middle-class women was also reflected in clothing. Complicated hairstyles, formal clothes fashion – women were above all decorative.

The Riege family photo was placed in the museum in 2008. In the picture are (standing) Aunt Linchen, on the left Aunt Amalie, on the right an unknown family member and at the front Gertrud Riege.

Child education was the responsibility of the mother. However, there was usually assistance from a nanny. Sometimes the relationship between the nanny and the children was closer than with the mother.

The education of middle-class girls included all of the activities later expected of the married woman and housewife. This included the ability to produce, decorate and maintain textiles. A girl learned common handiwork techniques as a child. The self-embroidered pattern book with the alphabet and a row of numbers was later used as a template for the embroidery of trousseaux. 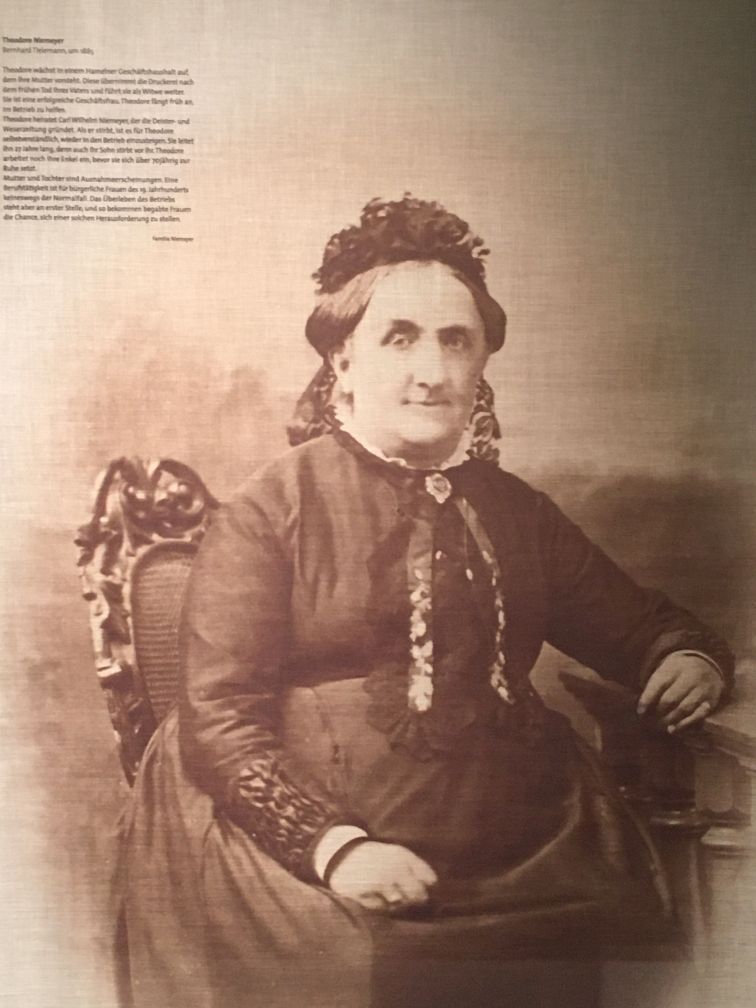 Theodore grew up in a busy Hamelin household of which her mother was the head. The mother took over the printing company after the early death of her husband and directed it as a widow. She was a successful businesswoman. Theodore started early to help in the business.

Theodore married Carl Wilhelm Niemeyer, the founder of the Deister and Weser newspaper. When he died, Theodore naturally entered the business once again.  She led it for 27 years, since her son also died before her.  Theodore trained her grandchildren to run the business before she retired, aged over 70.

The mother and daughter were exceptional cases. A professional career was not at all the norm for middle-class women in  the 19th century. The survival of the business was the primary concern, however, and so these talented women gained the opportunity of rising to such a challenge.