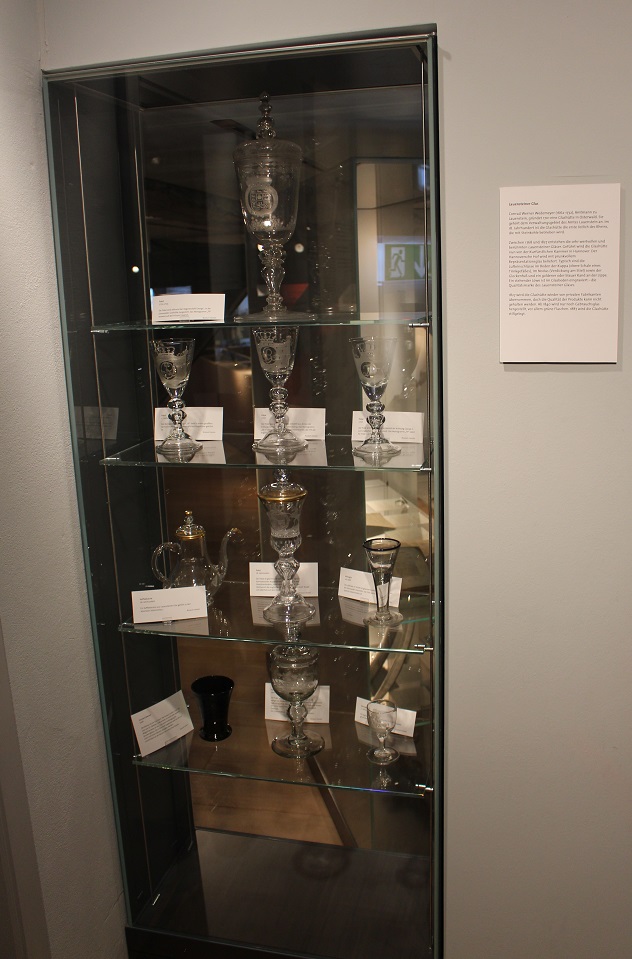 Conrad Werner Wedemeyer (1662-1732), administrator for Lauenstein, established a glassworks in 1701 in Osterwald. It belonged to the administrative region of Lauenstein. The glassworks was the first in the 18th century east of the Rhein that operated with hard coal.  The very valuable and renowned Lauensteiner glasses were manufactured from 1768 until 1827. The glassworks were then directed by the Electoral Chamber in Hanover. The Hanoverian Court was supplied with splendid representational glass. Air entrapments in the base of the bowl (upper shell of a drinking vessel), in the nodule (bulge on the stem) and also the bell foot, and a golden or blue edge on the lip are typical.  A standing lion is engraved in the base of the glass – the quality brand of Lauensteiner glass.  In 1827, the glassworks was acquired again by private manufacturers, but the quality of the products could not be maintained. From 1840, only everyday glass was produced, mostly green bottles. In 1887, the glassworks were closed down. 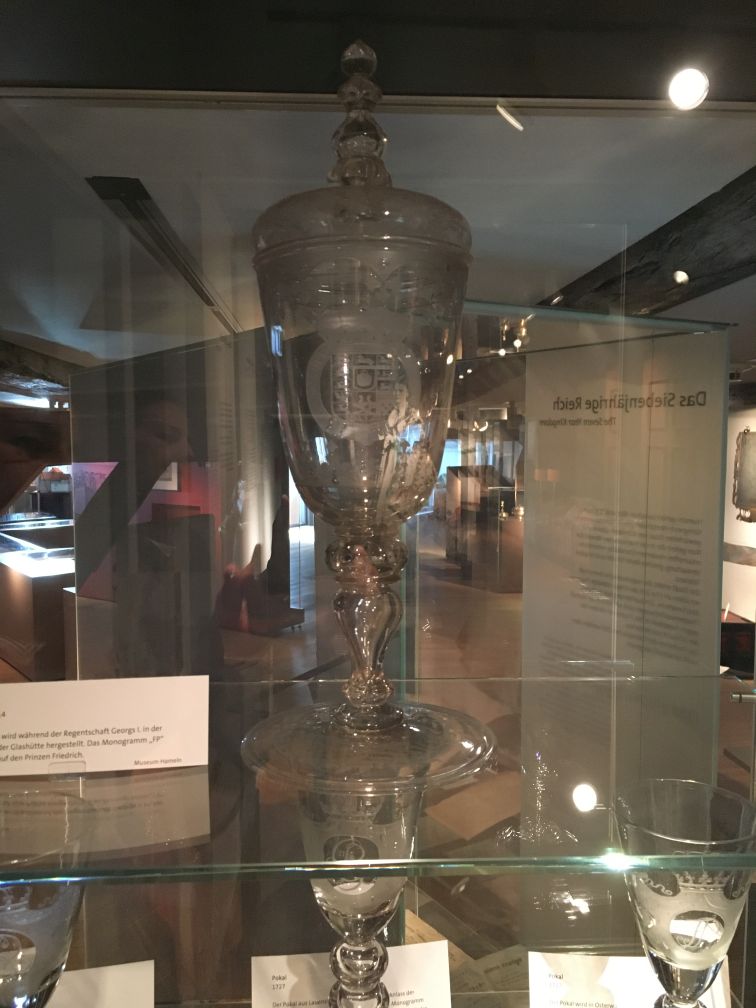 The goblet was manufactured in the Osterwald glassworks during the regency of George I. The monogram “FP” stands for Fridericus Princeps and refers to Prince Friedrich.

1st half of the 18th century

The monogram of the Queen “CR” is placed on a gathered ermine cloak crowned with the English hoop crown.

The goblet made of Lauensteiner glass originated from the accession of George II to the English throne. The monogram “GR II” is placed on a gathered ermine cloak crowned with the English hoop crown.

The goblet was manufactured in Osterwald for the occasion of the accession of George II to the English throne, and the monogram “FP” stands for Fridericus Princeps and refers to Prince Friedrich.

The goblet is decorated with the round English-Hanoverian blazon and the motto of the Order of the Garter, “Honi soit qui mal y pense.” The motto of English kings “Dieu et mon droit” is likewise on the glass.

The air bubble in the shaft is a kind of hallmark of the Osterwald glassworks. The glass also displays the typical lion brand.

A coffee set made of Lauensteiner glass is among the absolute rarities.

The goblet was produced for Adolf Schrötner. He was a royal pheasant master in the Hanoverian Court. On his birthday on 2nd October 1836, he received this expensive gift from Georgine Dreyer and a person with the initials “AN”.

The glass cutting was performed by Johan Paul Kessler.

1st half of the 19th century

The hunting scene was cut by Johan Paul Kessler in Osterwald.

The cup was a gift. The occasion on which “Lina” received the glass on 15th October 1845 is no longer known. Possibly the glass was a prefabrication for souvenir glasses which were offered for sale in Pyrmont and locally only equipped with a name.

The cup was cut by Johan Paul Kessler.