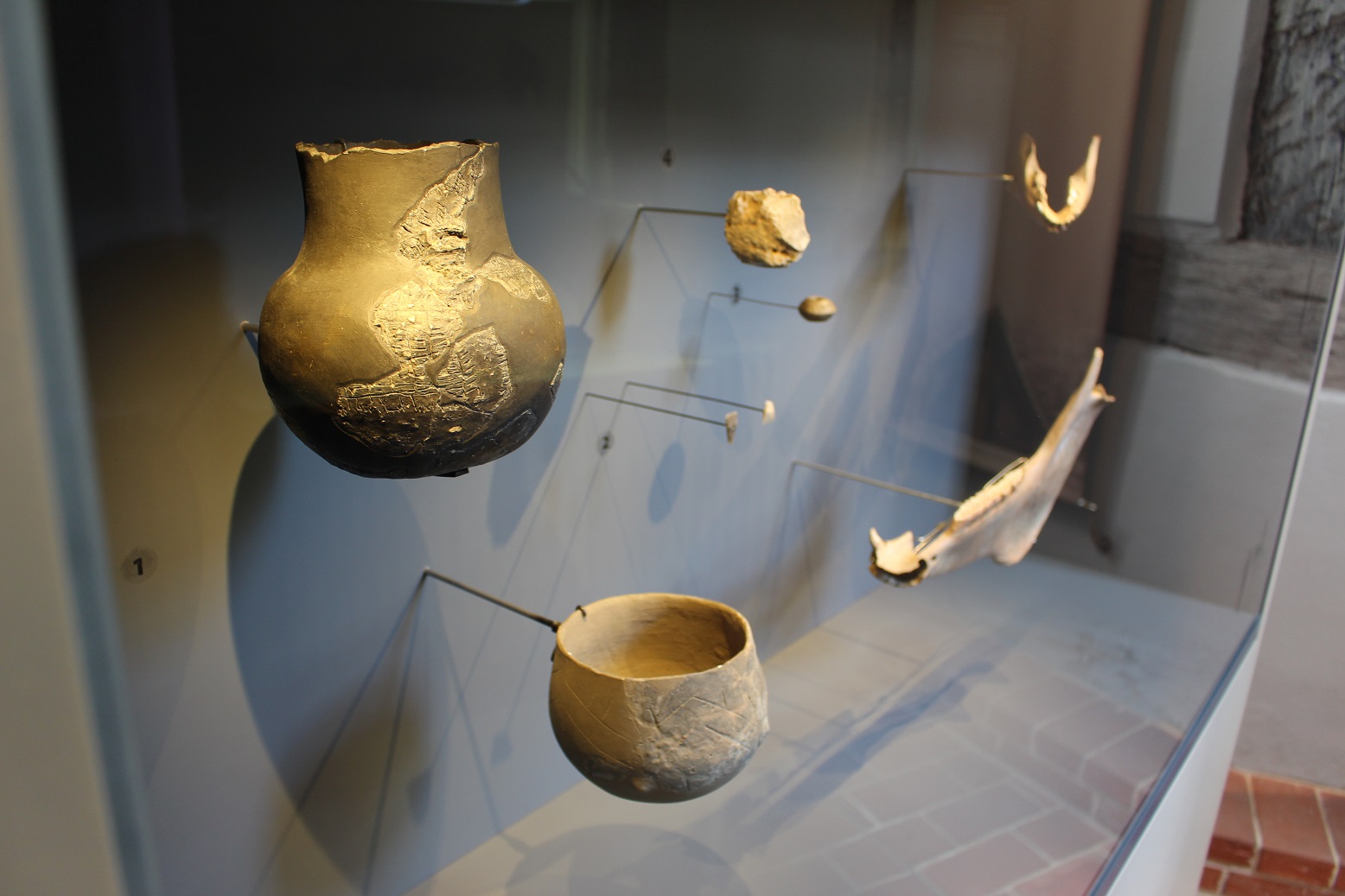 Life in the (late) Neolithic

Awls are among the oldest tools. Accurate dating is therefore difficult. They are mostly made from long bones. The bone is pointed on one side. The awl is suitable for piercing fur, fabrics or skin.Loan from the Museum im Schloss Bad Pyrmont

Bow and arrow have been the main hunting weapons since the end of the Paleolithic. Arrows are equipped with sharp tips made of flint. These exist in a wide variety of forms. Archaeologists can draw conclusions about their date and regions of origin by their form and retouching. Flint-tipped arrows were still used in later epochs.

In the Mesolithic, trapezoidal microliths were used as arrowheads for the first time. The cutting side is attached at a right angle to the arrow shaft. As a result, they cause larger and more fatal wounds.

The hand spindle is the first tool that can be used to process fibers. The spindle whorl serves as a weight. It is set in motion with the shaft. The strip of wool running through your fingers is rotated into a thread. This can be processed into a fabric. Most times, spindle whorls are made from clay

At the end of the Neolithic Age, bronze casters increasingly competed with craftsmen who specialize in working flint. The stone specialists are therefore constantly refining their techniques to be able to keep up. The central ridge of this flint dagger shows how highly developed the craftsmanship is. It copies the casting seam that is created during the production of bronze and copper daggers.

Characteristic of the so-called Funnel Beaker Culture are vertical grooves, furrow ricks or cutting lines on their pottery. This bowl was found in the 1980s during archaeological excavations at the „Wangelister Field“, a well-known burial ground from the younger Bronze Age and the older Iron Age. It is likely that this bowl was deposited in a grave, presumable one of the oldest if not the oldest on site.

Towards the end of the Neolithic, the so-called Globular Amphora Culture extends their settlement grounds. The typical spherical pots give them their name. This example is particularly rich in decoration with stitch ribbons and incised lines. The fish scale decoration on the pots neck is also typical. The pot is not complete. The unadorned sections were added during its modern day restoration.

The cultural group of Linear Pottery Culture marked the beginning of agriculture, cattle breeding and sedentarism in Europe. It is named after the typical ribbon pattern decoration on their pottery. Such round-bottomed jars are particularly common. They are hardened in an open kiln or field fire. The color of the pots depends on the clay used and on the addition or reduction of oxygen during the firing process.

Loan from the Landesmuseum Hannover