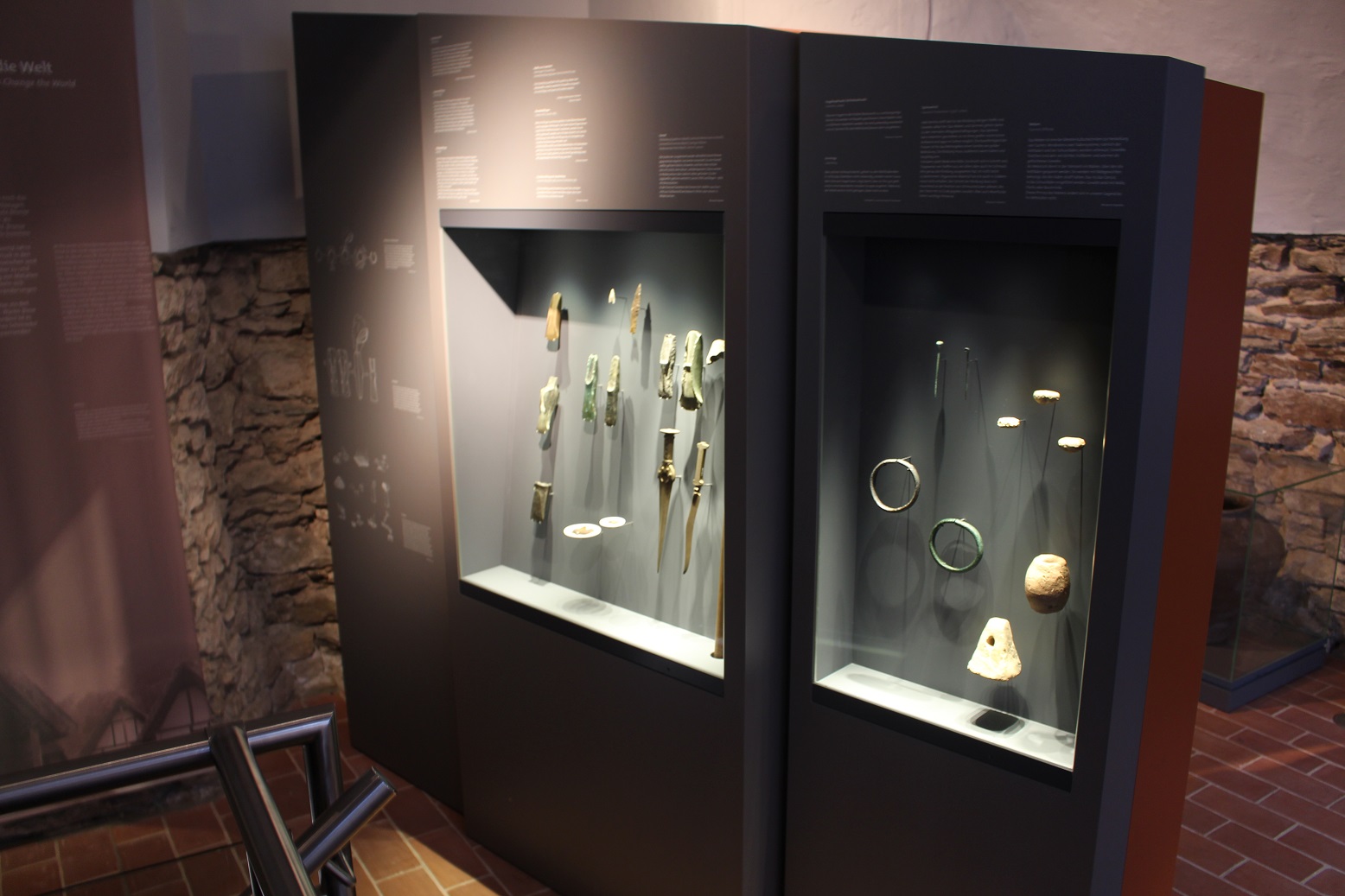 At this point in time farmers and breeders still use stone as the most important material for producing tools. Around 2000 BC bronze products are imported to Northern Germany for the first time. This creates a boost of innovations. Bronze consists of copper and tin. These metals are not found everywhere.

The same is true for iron, which is imported a thousand years later in the form of tools and ornaments. Long-distance trade increases rapidly. Mining and the processing of metals require special skills, thus creating new professions. The changes in socity are profound.

In Afferde in 1904, a tip of a spear, an axe and a wristband made of bronze, are found. Had these precious artefacts been buried out of fear? Is it the hiding place of a trader or a blacksmith? Archaeologists address interesting questions like these. 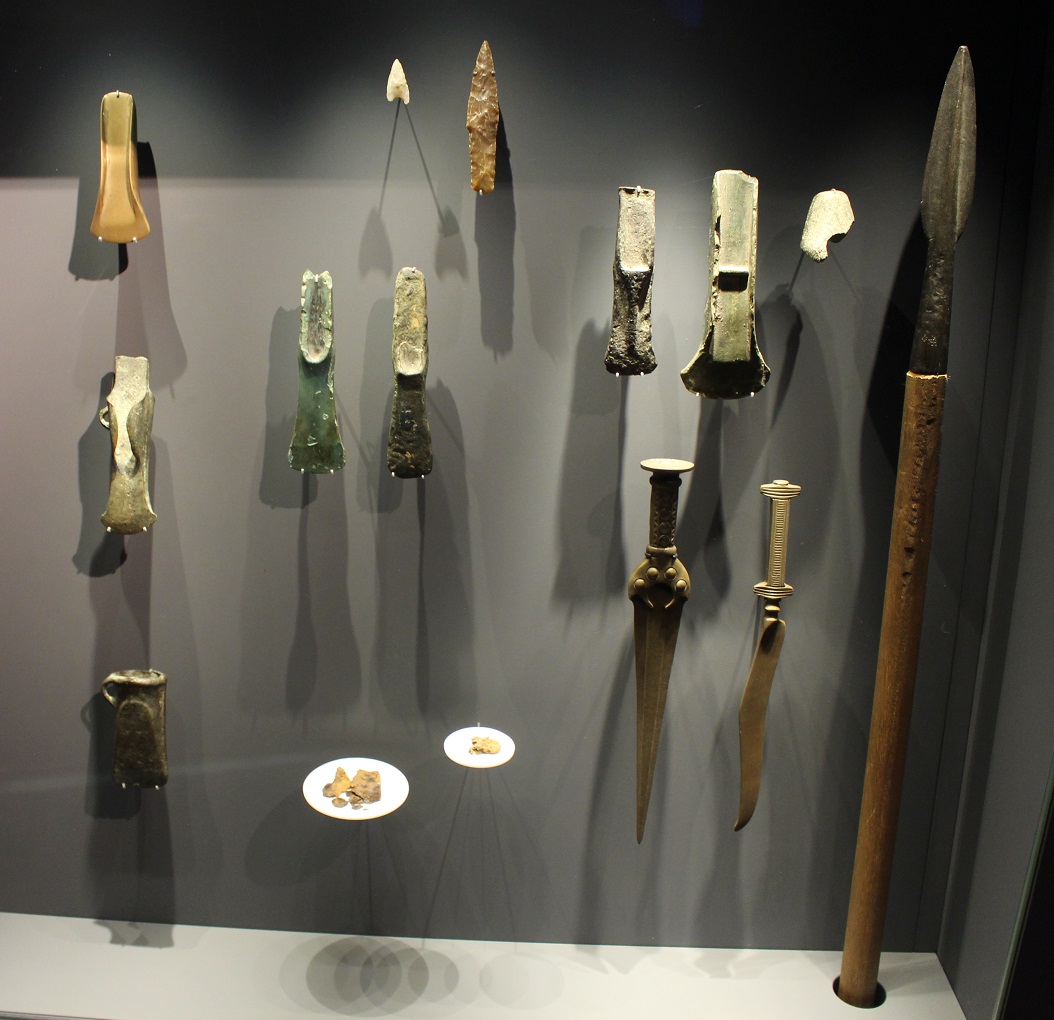 There are only a few signs of houses from pre-Roman times.  We know that they were up to six metres wide and up to 25 m long. One or more families lived in small groups of farmsteads or hamlet-like villages.

In the 8th/7th Century BC, many hilltop settlements arose. Hill spurs or high plateaus were fortified with wall and ditch systems.  They were probably used as refuges, offering people and animals protection.

Illustrations on side of the showcase

Metal casting in a non-permanent mould

The object to be manufactured is moulded using wax and enclosed in a clay coating.  Then it is fired. The wax thereby melts and flows out.  Liquid metal can be cast in the hollow space now created.  After hardening, the mould must be broken, and so it is destroyed.  The blank is now smoothed and polished.  Decorations can be beaten in or engraved.

Hollow bodies can also be made in this way, e.g. socketed axes.

Bronze is composed of nine parts copper and one part zinc.  These components are mined and smelted.  The metal can be further processed using various casting processes.  As liquid, it is cast in an open, single-layer mould made of stone, clay or metal.  One side of the object remains flat.  For example, sickles or razors are manufactured in this way.

Fully sculptural objects can be cast in a two-layered casting mould. This is how bronze axes are made.

Iron occurs naturally as ore.  It can often simply be collected from the surface of the earth.  It is crushed, freed from waste rock and roasted over fire. Conical pipes made of clay around 1m high are used as smelting ovens.  Under the oven there is a small cavity.  In these so-called bloomery furnaces, ore and charcoal are alternately layered. At temperatures of up to 1150°C, the iron melts out of the ore.  Slag gathers in the cavity, iron is enriched in the oven.  To retrieve the iron, the oven must be broken after cooling.  It is purified by repeated heating and forging.  It can also be further processed.

This type of axe was predominantly made and used in the Early and Middle Bronze Age. It is a further development of the flat axe, which was cast from copper.  The raised bar of the flanged axe ensured a secure positioning on the wooden shaft, the knee shaft.

Flanged axes are easily datable.  When discovered in archaeological investigations, they show from what period, for example, a grave finding originates.

The name of this axe blade shape refers to the enveloping securing wings.  Surprisingly, these were only folded over after the casting and ensured the secure positioning of the blade on the shaft.

The winged axe blades represent further technological development of the Early Bronze Age flanged axes. Nevertheless, other types were also made at the same time: some considered a different style to be more practical.  And there were also regional differences and traditions.

Such blades were typical wood-processing tools of the Early Bronze Age.  They were attached to so-called knee shafts. The blades were simply inserted into the base of the branch.  A securing cord was pulled through a cast-on eyelet to protect the valuable blade from being lost.  The principle was clearly so well-proven that the design also continued to be used in the Iron Age.  Now the blade was no longer cast, but forged and welded into a grommet.

The development was not straightforward.  In addition to metal weapons, flint weapons continued to be used. They were cheaper and could be replaced more easily.

In the Early Bronze Age, axes with blades made of bronze were among the common tools. Even if these blades did not demonstrate the characteristics of proper weapons, they would have been used as such.  The name refers to the bulge in the middle of the blade, which is intended to prevent the splitting of the shaft under load.

The axe shafts were made from branch sections using the bases of the branches. They are called knee shafts. The base of the branch was shaped into a fork onto which the blade was attached.  The blade was secured using leather bands.

The manufacture and processing of iron requires special knowledge.  Evidence such as this demonstrates that iron was smelted and processed.

Tools from the Neolithic period were gradually replaced by bronze items and were further developed.  Daggers, swords and axes were among the combat weapons.  Protection was provided by shield, helmet, chest and leg armour. These were discovered in Lower Saxony, but are extremely rare.  Among the hunting weapons, there are still lances, and bows and arrows – now with bronze tips.

The designs continued into the Iron Age. Weapons made of iron are known from southern Germany, but so far have not been found in Lower Saxony. 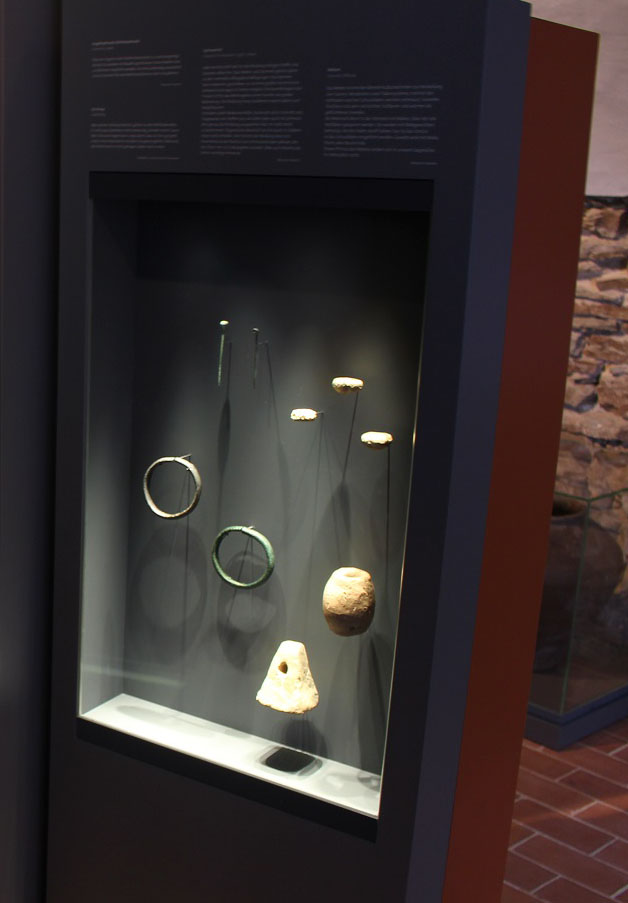 In the Early Bronze Age, men wore cloak-like overcoats among other things.  They were fastened using pins. These pins had been imported from Bohemia.  They were expensively made and a sign of the wealth of their possessors.

Whoever owned such jewellery belonged to the wealthy.  It was not required for survival, but was pure luxury.  Those who could afford to wear jewellery displayed that they were well off and belonged to a special social group.  It was not worn during work, where it would have got in the way.

Each family manufactured the cloth and fabric necessary for clothing themselves.  Weaving and spinning were thereby part of normal daily activities.  Spinning could take place simultaneously with other things, as it was possible without much technical effort and even whilst walking. Women’s craftmanship was of great importance for family welfare.  Clothing must first and foremost keep the wearer warm and have a long life.  Fashion nevertheless plays a role. It is expressed in the cut of fabrics and the way of wearing them, but also especially in jewellery.

How exactly the clothing looked is not easy to determine.  Organic material is also mostly not preserved in graves.   The cut of the clothing can sometimes be inferred from the positioning of pieces of jewellery placed on the dead person in the grave. Swamp discoveries also provide important clues.

Weaving is one of the oldest cultural techniques for the production of cloth.  At least two yarn systems, namely warp thread and weft thread, are crossed.  Woven textiles are much thicker, more durable and warmer than braided fabric.

In the Stone Age, a beam was used as a weaving loom on which the warp threads were stretched.  They were fastened with loom weights which hold the threads taut. This is the framework into which weft threads were introduced.  Wool, flax or tree bark were used for weaving.

This principle of weaving did not change in our region until the Middle Ages.