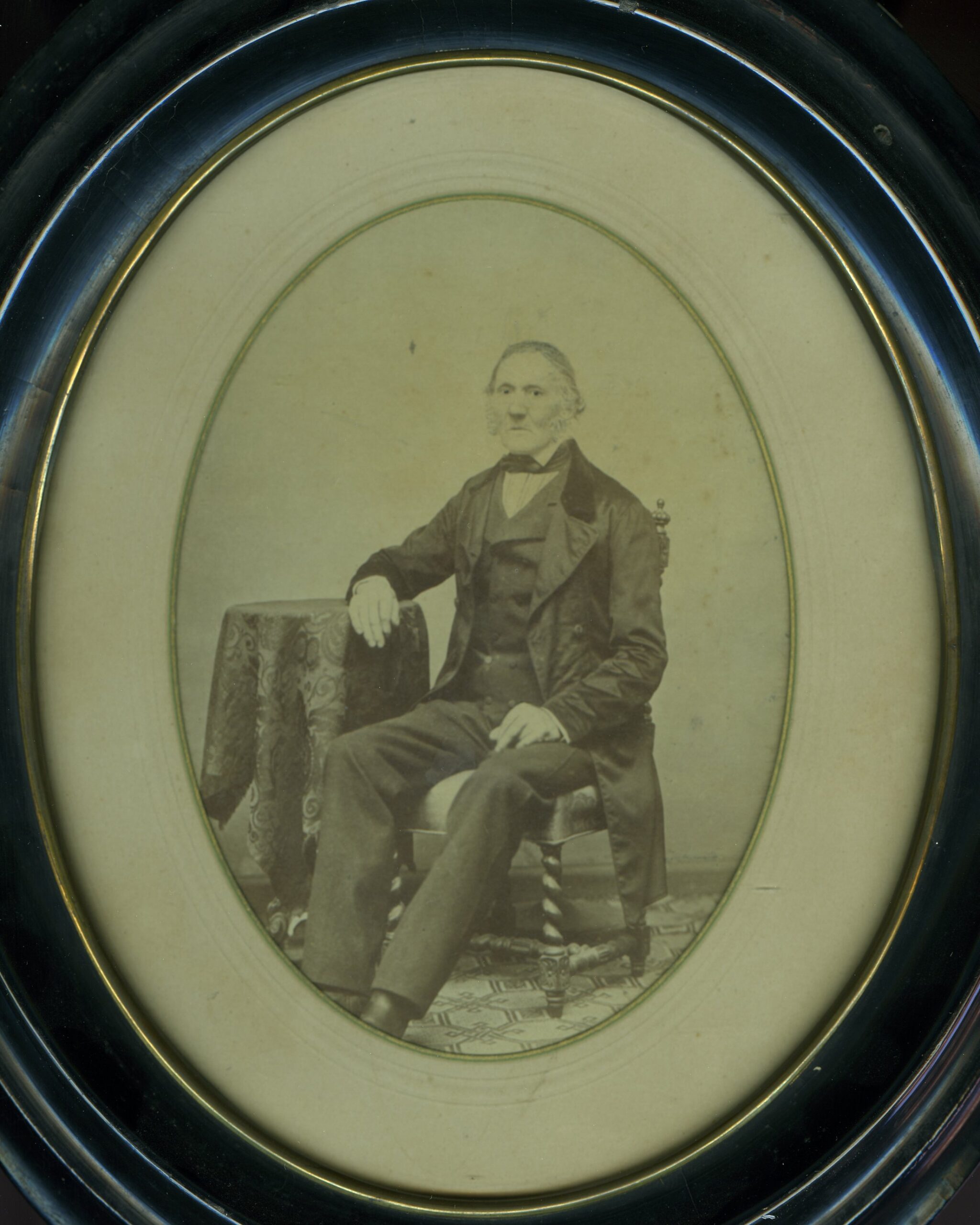 From 1825 to 1910 the Wallbaum family lives in the house that is now the Hamelin Museum. Wilhelm Adolph Detlef Wallbaum (born 1799 in Einbeck) comes to Hamelin in 1824 as a young master bricklayer.

His employment by the magistrate is announced in the „Hamelnsche Anzeigen“: „I am making the most obedient announcement to the honored public of the local town and region that I am employed by the laudable magistrate as a master bricklayer and at the same time recommend myself as a stonecutter and maker of monuments and similar work.“

1825, Wilhelm marries Friederike Scharnhorst. In the same year they move into the Leisthaus.

1827, their first son, Adolph, is born. In 1829 his sister Friederike is born, and two years later Emma Wallbaum. 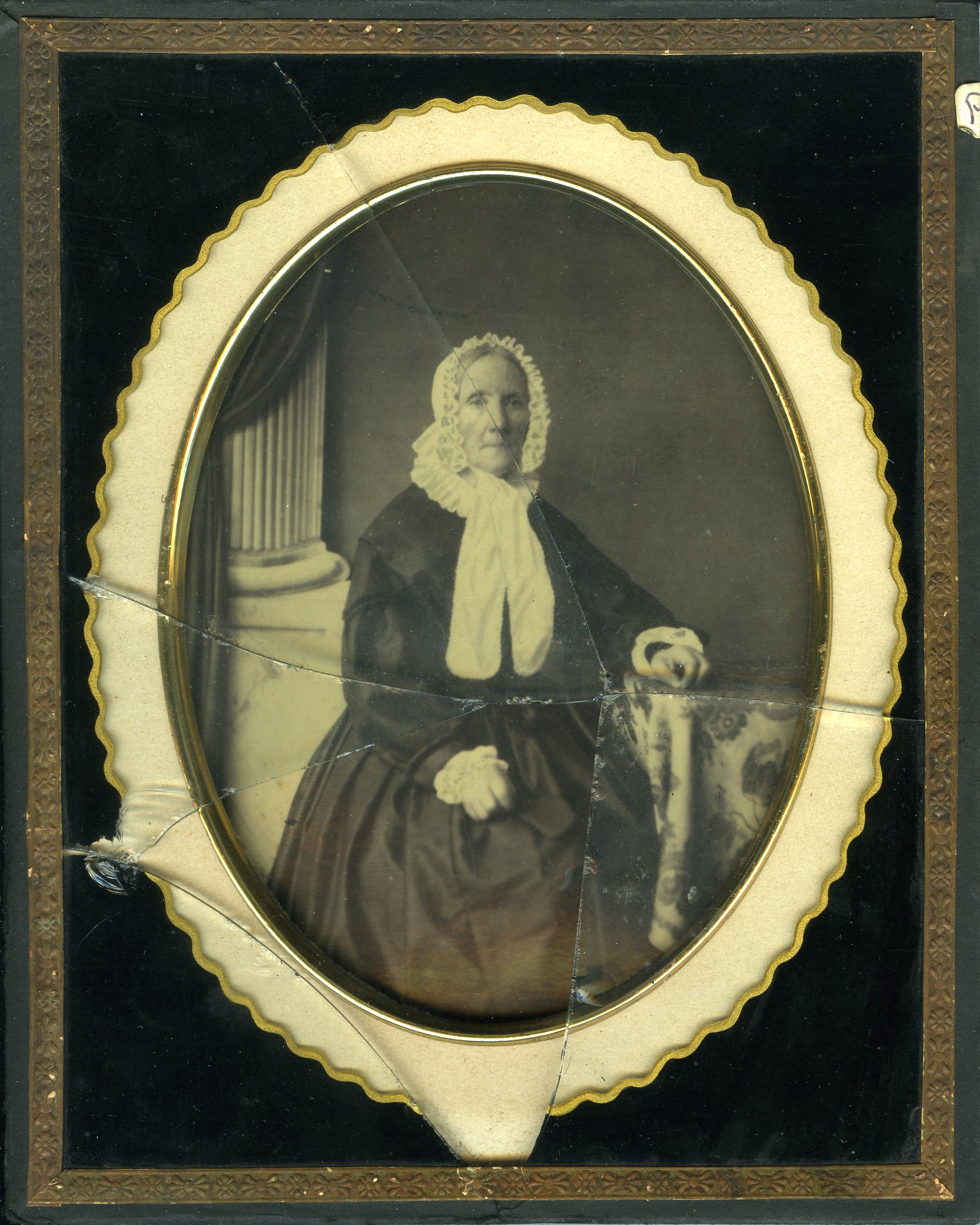 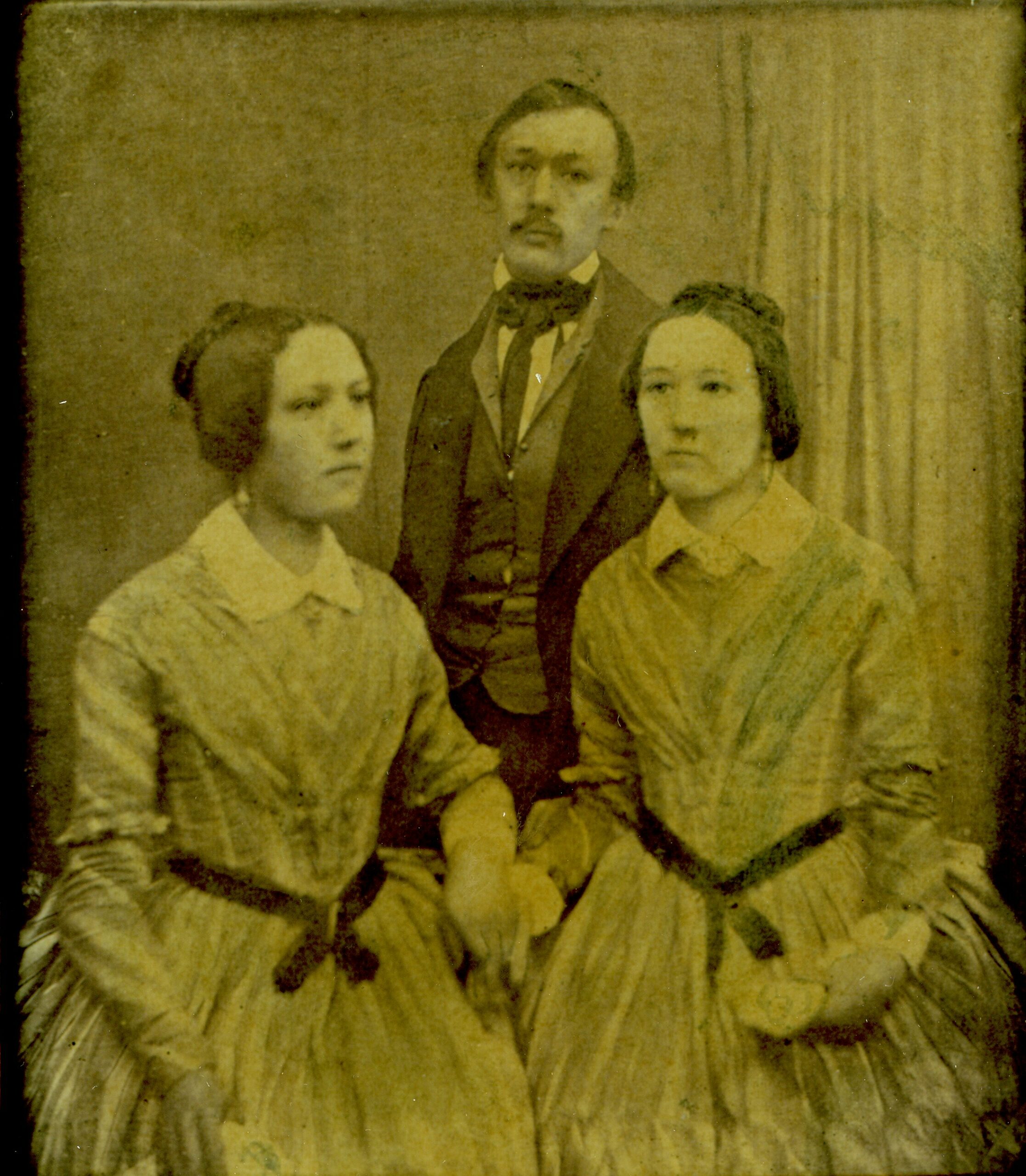 In the following years Wilhelm Wallbaum is involved in many public building projects in the Hamelin area and is politically active.

Friederike Wallbaum-Scharnhorst, on the other hand, isolates herself and her children from the outside world. The three children are raised very strict and have to avoid other children, at the behest of their mother.

The Wallbaum siblings do not leave their parental home and remain unmarried. The family situation seems to be particularly stressful for Emma: she commits suicide in 1862 at the age of 30.

After the death of their parents in 1867 and 1873, Adolph and Friederike Wallbaum live alone in the Leisthaus. The death of the parents seems to be the trigger for the brother and sister to withdraw even more from the public. Soon after his father’s death in 1873, Adolph Wallbaum appears only as a „reindeer“. From this point on, brother and sister live from the lavish reserves.

The Wallbaum siblings are followers of the “good old days”. This means a strong rejection attitude towards the new and the unfamiliar. But this is also expressed in an almost delusional loyalty to the Hanoverian royal family.

In Hamelin, Adolph and Friederike are seen as strange people. On the one hand, the secret suicide of their sister Emma plays a role. On the other hand, the lifestyle of the two Wallbaums, in their insistence on old habits and traditions, in the traditional furnishings and household chores, in their clothing, way of speaking and thinking, also expresses stinginess.

The latter in particular seems to be the reason why Adolph and Friederike are not left alone as harmless „originals“, but are mocked as quirky „loners“. 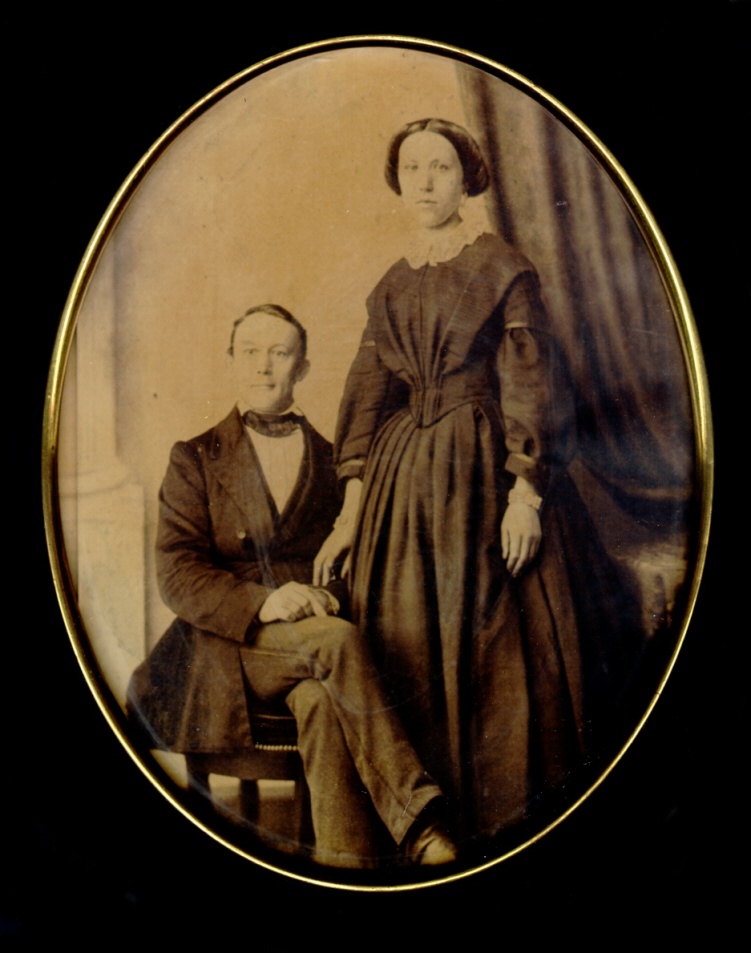 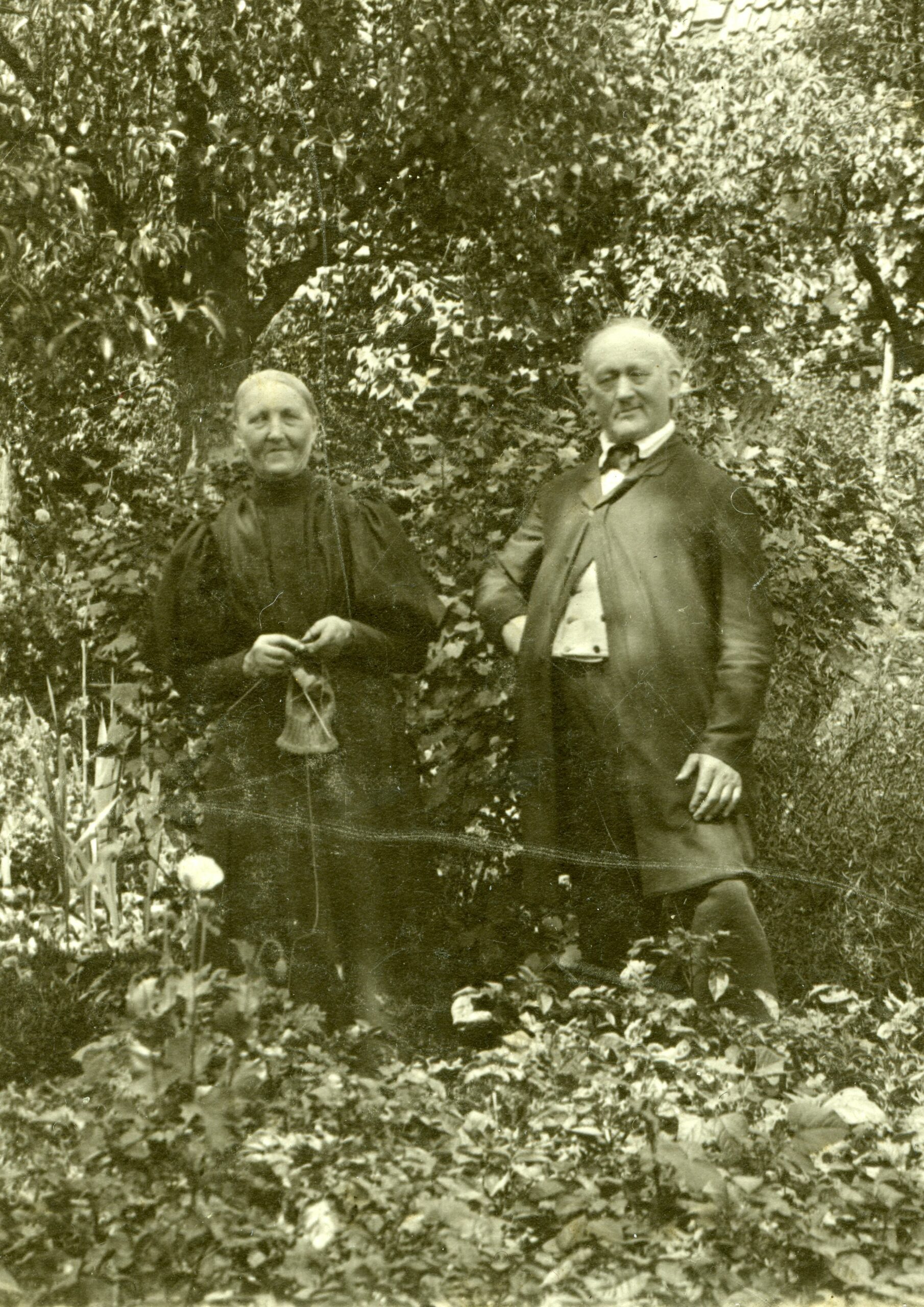 Adolph Wallbaum loves to stroll down the Osterstraße, or to sit comfortably in a wing chair in the bay window, watching what goes on in front of the house – and commenting on it. He even keeps a diary in which he notes his impressions and comments on world events „outside the door“. It is a collection of culturally pessimistic statements and arch-reactionary attitudes. Above all, he passionately hates the railway, the „motor of modernity“ – and Wallbaum was not the only one with that opinion at that time. He hates the naughty and spoiled youth just as passionately. And the youth of Hamelin mocks him for it.

In October 1898 the museum association is founded in Hamelin. Adolph Wallbaum is one of the first members. He and his sister collect curiosities and antiquities themselves and decorate their home like a museum. The museum association is also set pro-welfs and sees its mission as a museum in a glorifying depiction of the Kingdom of Hanover.

The will of Friederike and Adolph Wallbaum is written as early as 1901 and the first version already named the association as the heir to the Leisthaus and the “Wallbaum Collections” – coins, clocks, gold and silver items and documents. 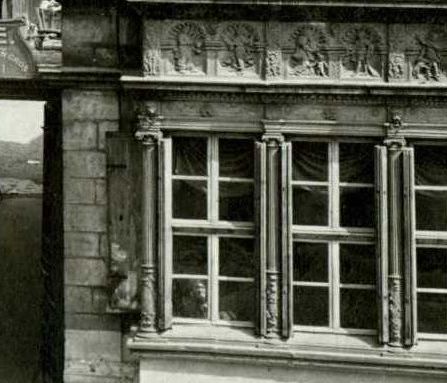 If you look closely, you can see Adolph Wallbaum sitting in the bay window. 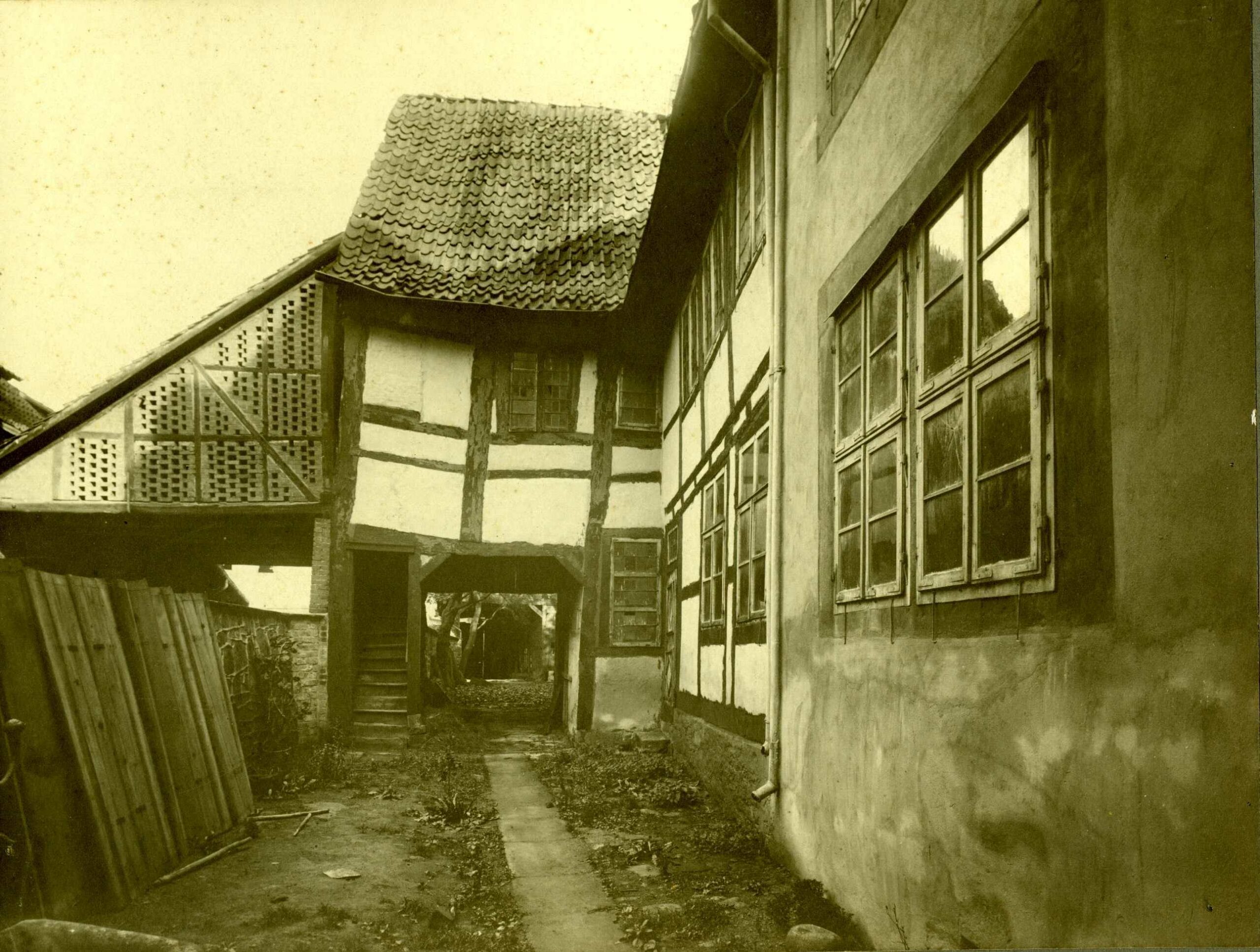 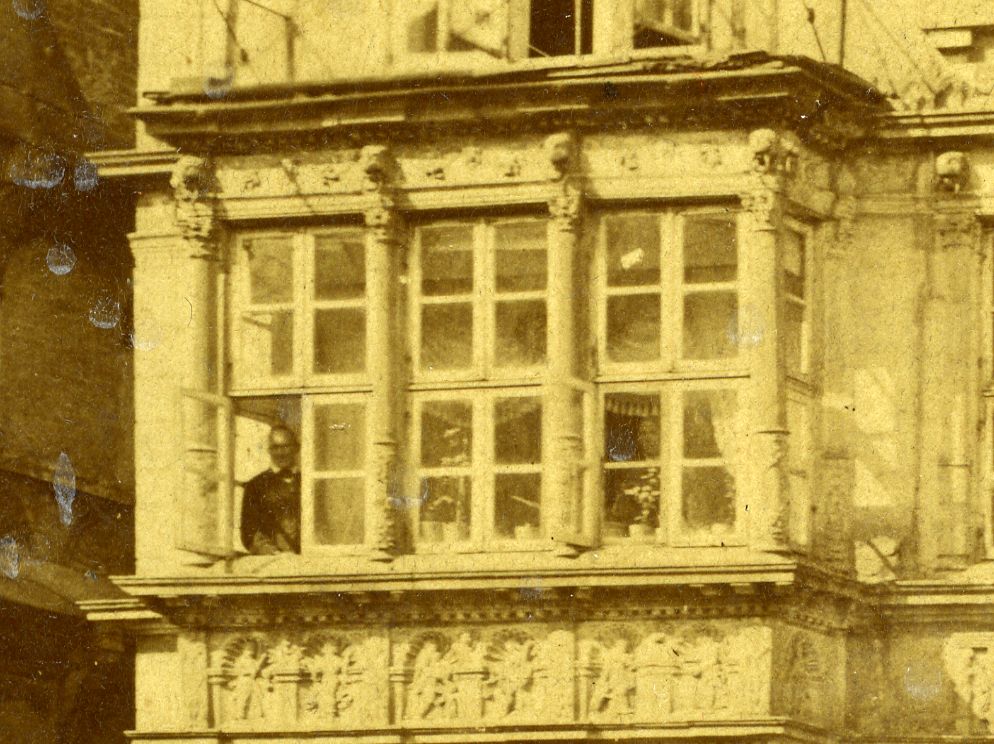 In this photo, Adolph can be seen behind the open window on the first floor of the bay window. Friederike can only be seen in outline on the right behind the closed windows.