The Pied Piper in the Arts

Very early on this motive became extremely popular in German verse.  Moral poetry is already found at the end of the 16th Century. Popular Pied Piper rhymes are handed down through books and on “flying leaves”.

But it is only after the beginning of the Romantic Period that the legend is rediscovered and catches the attention of the “great” poets.

The “Fine Art” sector takes notice of this legend much later.  From the late 19th Century, opulent oil paintings and sculptures are created; Operas and music pieces are composed. All undergo various variations in the 20th Century.  Pop singers, songwriters, all sing of the Pied Piper of Hameln. It was made into a film in 1918.  The fascination of the Arts for this mysterious story is never-ending.

The refined figure of Georg Hengstenberg (1879-1959) is somehow mysterious.   The lips certainly seem pointed, as if playing the flute.

This Pied Piper, however, holds the instrument itself rather like a conductor’s baton and furthermore above his head.  Is he a musician, a magician or a conjurer? The various motions of the rats correspond to the ambiguity of his actions. Insofar as the artist created suspense as to what is actually going on, the figure thus represents unresolved tension.

Descended from a family of artists, Hans Kohlschein (1879-1948) received his training at the renowned Düsseldorf Academy of Art. He gained recognition through monumental historical paintings among other things, and in addition as an official war artist on the Western Front and in Poland during the First World War.

His unusual representation emphasises the grim aspect of the Pied Piper. The face constructed with restless brushstrokes makes the Piper appear like a shady tempter. The ornamentally designed surfaces of the street are also noteworthy, alluding to artistic movements such as art nouveau.

The painting was lost for decades and was only rediscovered in the 1980s. It was presented to the Museum Society in 2013 by descendants of the artist.

Among the favourite motifs of the Munich painter and illustrator Kaulbach are children and children’s scenes, which are portrayed in mild, warm light.  The Pied Piper painting is created as an “open picture history”, where completion is put into effect in the observer’s head.  The Pied Piper is just departing and happy children follow him up the steps, but a fascinated old woman can also be seen. The scene is marked by great dynamics: children come directly from eating, leaving their toys aside, and they get out of breath or are dragged along by their older siblings.

The drama of the mythical happenings is uniquely clear from the facial expression of the central girl’s face: she is looking at the observer surreptitiously; she knows it is dangerous to follow.  This is exactly what tantalises the child.

Carl Plinke was a Hanoverian painter. He lived temporarily in Hamelin in the 1920s and was even a member of the management board of the Museum Society for a while. During this period, a number of oil paintings with city views, the cathedral or the chain bridge were created. A portrait that he painted for the Brandt family of Hamelin is also well-known.

The large, magnificently framed oil painting of the children’s procession may have been created in connection with the jubilee of 1934.  The scene is romantic and peaceful. There is no sense of hurry, the children pluck flowers and play with a goat.  They call out to other children, who can already be seen following. In the background lies the sunlit Hamelin in the Weser Valley.  Plinke demonstrated that he knew the region. 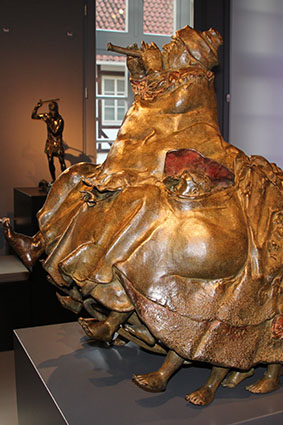 It is an unusual and disturbing entourage that is moving towards the observer. The Pied Piper, the rats and the children can still be recognized, but in their amalgamation they allow a wide range of associations.

Is that a coat or even a tank? Do we see tails of rats  or are they fuses? A flute or a gun barrel? A Blind cohort of  young people, whose little feet march in step instead of  tank tracks?

Ambiguity and associations of war are wanted by the artist. Thereby he transfers the old Pied Piper legend into our present and strengthens the feeling of uncertainty that is connected with the story.

The purchase of the sculpture was possible due to a generous donation by Heinrich Riebe, Hameln.