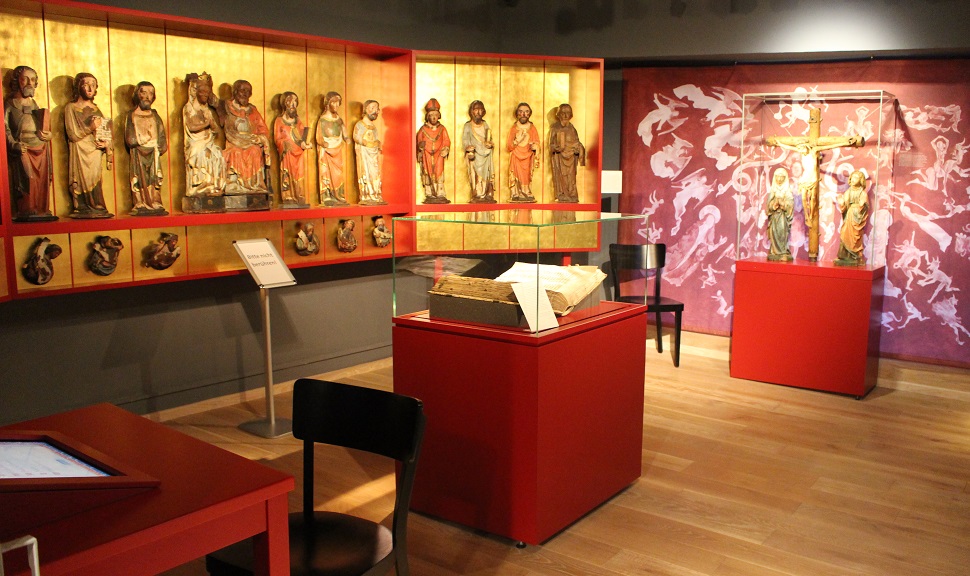 Believe and the Church in Medieval Times

The monastry at Hameln is founded in the middle of the 9th Century. The original building is a church, built by the childless couple, Count Bernhard and Countess Christina of Saxony. They donate the building and the accompanying grounds to the Benedictine Abbey of Fulda.  Hameln soon becomes a daughter monastry.  Soon after that it changes to a collegiate church. The clergy don’t belong to any particular religious order anymore. They live near the church premises.  Services, Holy Communion and Devotions take place regularly.

Around the year 1200 a Merchant Church is build at the market square.  Various chapels spring up around it, where saints are worshipped.  Processions and pilgrimages are an integral part of church life.  At the same time paganism and superstition continue to exist.  In the 14th Century the established church is challenged by new ideas and religious orientations.  Monastic orders and sects come into existence.

The figures belong to the Mary Coronation altar, dating from around 1360/80. It stood as a high altar retable in the cathedral.  In 1897, the figures were placed in the museum.  They have survived in rare completeness.  Only James the Elder is clearly recognisable. He wears a clam as a cloak clasp.  The apostles John, Peter, Matthew, Paul and Bartholomew are possibly among the disciples represented here.   The other figures cannot be identified.

The altar figures are complemented by the Coronation of Mary, the Saints Boniface and Afra and half-figures of six prophets. There were more reliefs depicting prophets. How many are missing today is no longer traceable.

The figures of the apostles, like those of the prophets, have been repeatedly reworked and restored.  This occurred in very varied ways, so that the figures today – despite great stylistic similarities – seem very inconsistent. 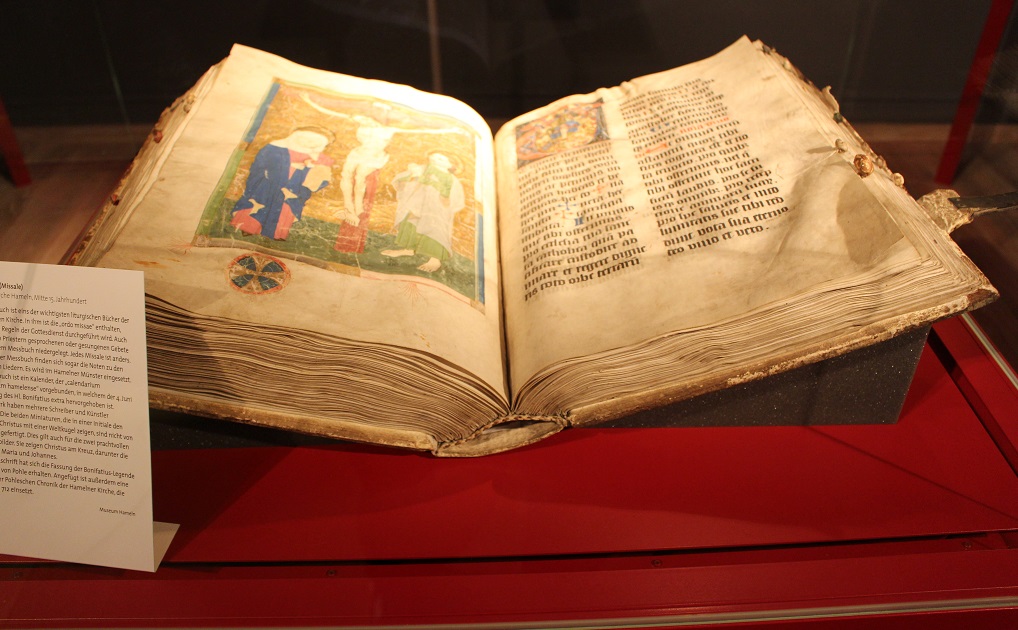 This service book is one of the most important liturgical books of the Catholic Church. It includes the “ordo missae”, according to the rules of which the church service was held. The prayers recited or sung by the priests are also laid down in a service book.  Each missal is different.  Even the musical score of the most important songs is found in the Hamelin service book. It was used in Hamelin Cathedral.  A calendar is pre-bound to the service book, the “calendarium necrologicum hamelense”, in which the 4th of June is particularly emphasised as the date of death of St. Boniface.

A number of writers and artists worked on the creation. Both miniatures, which show Christ standing with a globe in an initial, are not the work of one person.  This also applies to the two magnificent so-called canon pictures.  They depict Christ on the cross, with the grieving Mary and John below.

The handwritten version of the Boniface legend by Johann von Pohle has survived. Attached is in addition a transcription of the Pohle chronicle belonging to the church in Hamelin, (erroneously) inserted in 712. 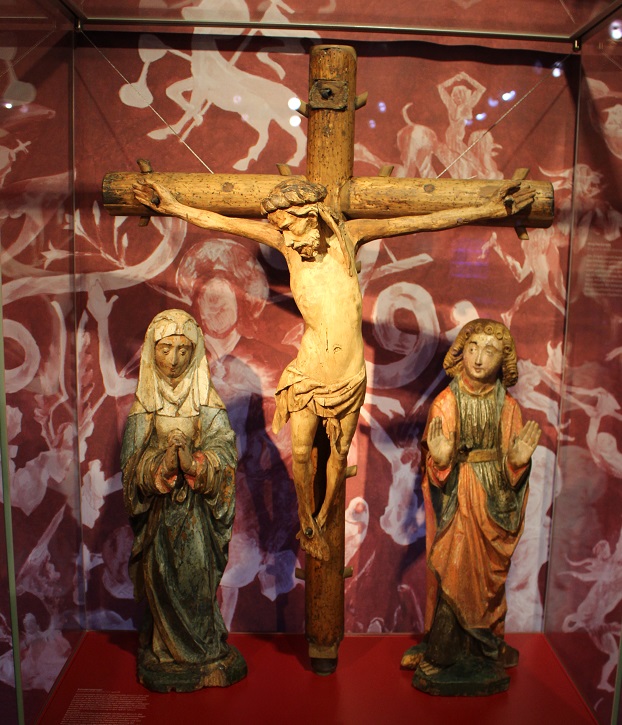 This crucifix is unusual because it can be dated: The monastery has belonged to the diocese of Minden since 1259. In a document of 7th January 1428, the auxiliary bishop of Minden, Wilhelm, sold a forty-day indulgence to those who revered it.  The preserved relics of the Saints Erasmus, Aldegundis, Peter and Paul are also mentioned in the document. Parchment strips referring to Erasmus Martinus and Aldegundis were found during restoration work in the 1980s.

Christ is portrayed as a suffering, dying person.  His legs are crossed, his feet pierced by a nail. Mary and John are carved full-round.  It may be assumed that both figures are free-standing and visible from all sides.  The displayed versions of the crucifixion group and the figures of the Mary Coronation altar resemble each other. 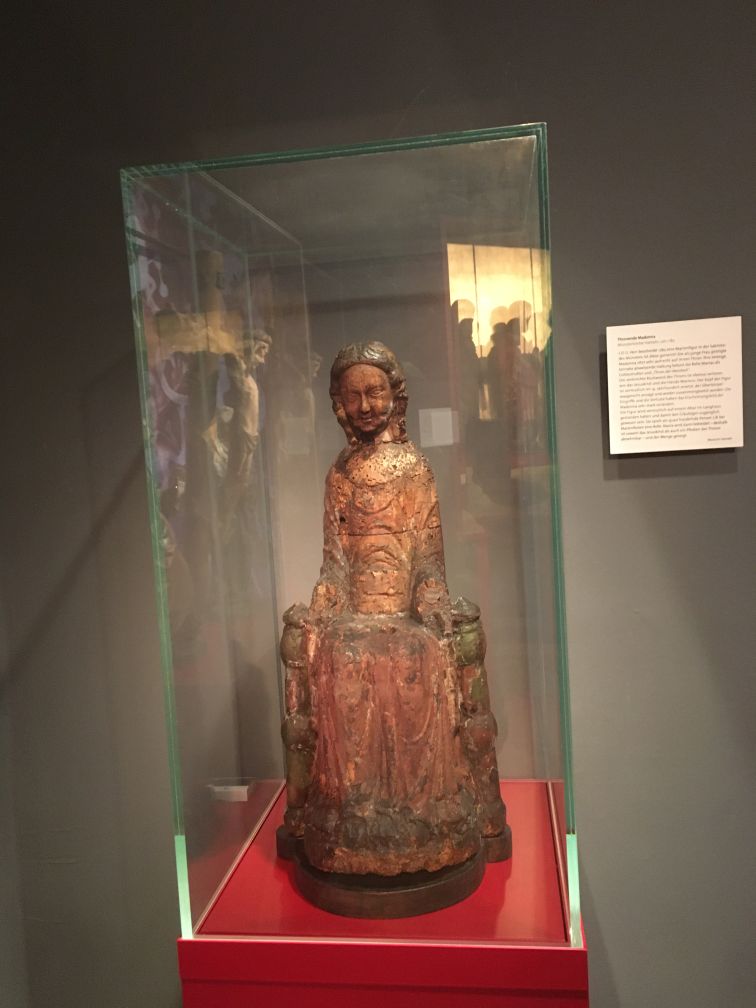 J. D. G. Herr describes a Mary figure in the vestry of the cathedral in 1765. Is this intended? The Madonna, shown as a young woman, sits very straight on her throne.  Her strict, almost forbidding posture emphasises the role of Mary as the Blessed Mother and “throne of wisdom”.

The vertical rear panel of the throne has been lost, along with the Child Jesus and the Hands of Mary.  The head of the figure was presumably replaced in the 14th century, the upper body horizontally sawn up and put back together again. The procedures and losses have greatly changed the visual appearance of the Madonna.

The figure presumably stood on an altar in the nave and thus would have been accessible to worshippers.  She played almost the part of an active person, e.g. at festivals of the Virgin Mary.  Mary was then clothed – for this reason both the Child Jesus and a pillar of the throne are detachable – and shown to the congregation.

The convent school in Hamelin has existed at least since the 10th century. This is confirmed by a register. It lists eleven pupils whose names indicate that sons of the Saxon nobility were taught at the local grammar school. A difficult pupil stole from the Hamelin school fund in around 1100: the later canonised and famous bishop and Slavic missionary Vizelin.

Sermon from the pulpit

The sermon was not the central element of a church service in Catholic belief.  It played an important role, but was subordinate to the holy Sacrifice of the Mass.  Catholic Mass was celebrated with much extravagance and splendour.  The great distance between the priests and the congregation was expressly desired.  The meaning of the sermons, which were delivered in Latin, was often not understood by the people. 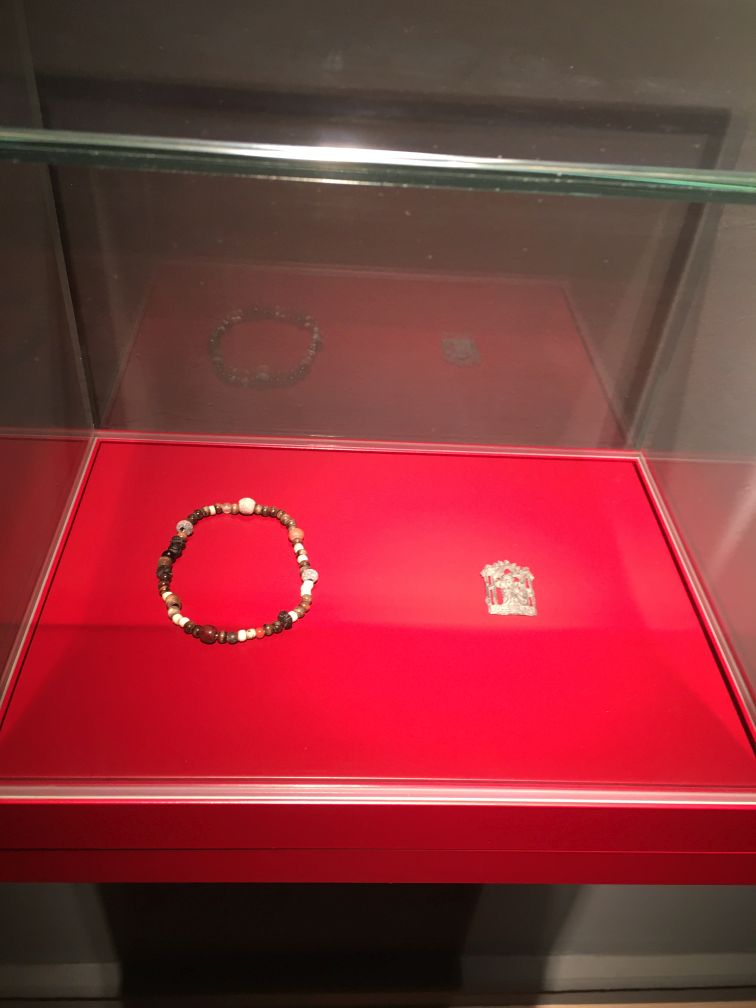 The leaden badge shows a standing Blessed Mother.  The text “d maria” is legible on the lower edge.  It thus comes from a place of worship of the Virgin Mary.  Many pilgrim badges can be locally assigned, but this is unfortunately not the case with this piece.

A pilgrim badge identified its wearer.  Certain advantages thus accrued during the pilgrimage.  Once he had returned, the pilgrim could prove his piety with an openly worn badge.
A pilgrimage was a very important event in the life of a medieval person.  The badge is a burial object and was found there during excavation.

The rosary originates from a pilgrimage to Santiago de Compostela. This pilgrimage was among the most important of all.  Some beads are made of jet, a Spanish coal. Three beads are prepared as small carved shells.

The rosary was used as a counting chain for prayers to the Virgin Mary and usually consisted of 59 beads.  They specified the number of prayers.  150 “Hail Mary” prayers was customary. 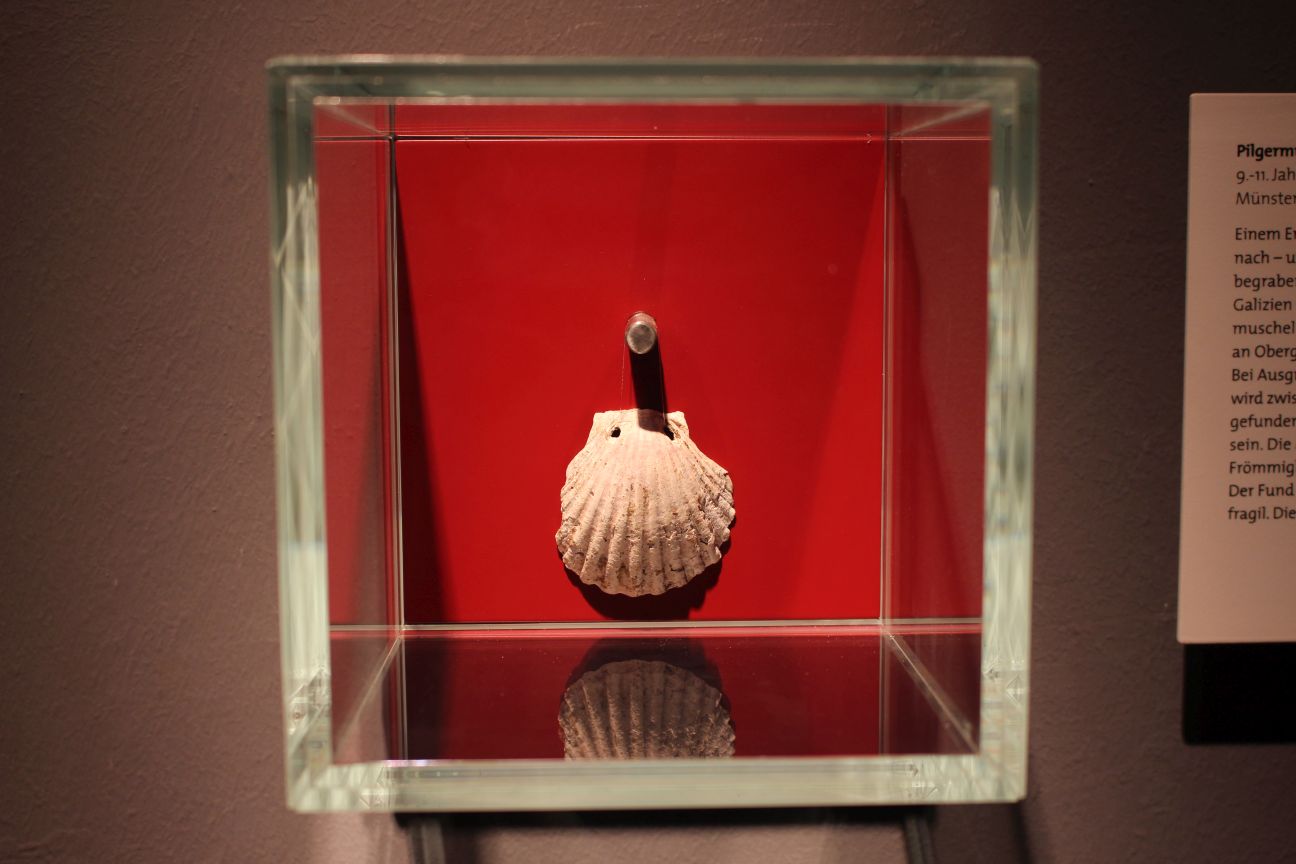 The place where St. James lies buried – according to legend – was revealed to a hermit in around 830 in Santiago de Compostela. A sepulchre was built and the location in Galicia soon became a destination for pilgrimages.  The shell of St. James was worn as a mark of identification on the pilgrim’s bag, over-garment or hat.
This pilgrim’s shell was found between the ribs of a skeleton during excavation in the crypt of Hamelin Cathedral.  The Santiago pilgrim could have been from Hamelin.  The shell was a burial object to prove his piety in the afterlife. 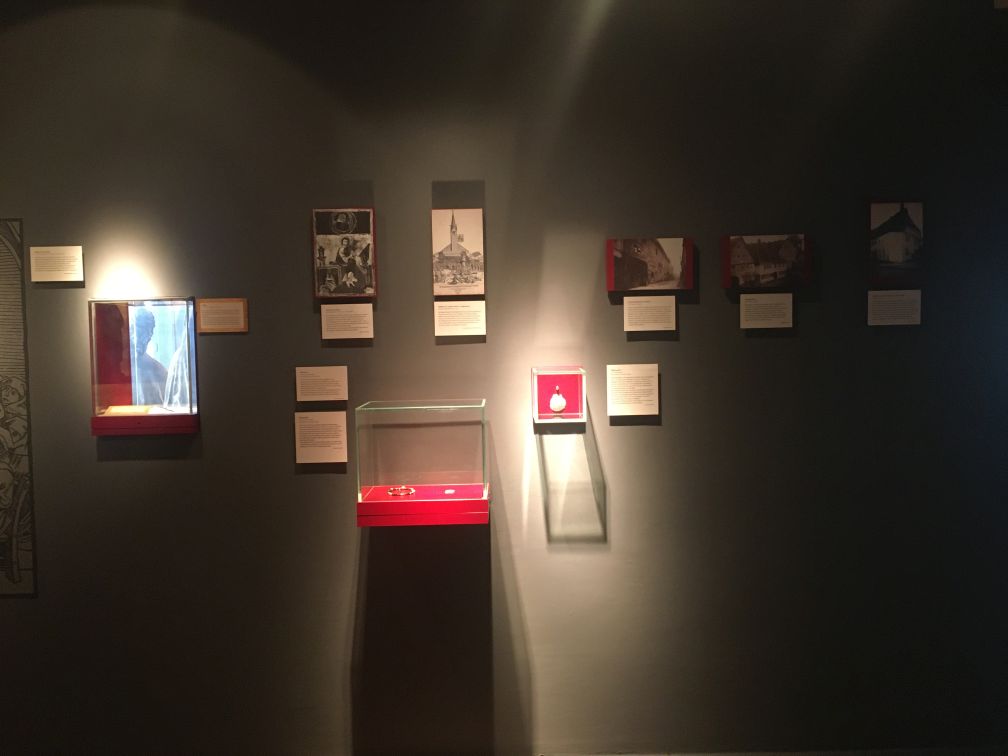 The Hamelin gospel book consisted of 150 parchment sides. Before each section there was a picture of the relevant evangelist.  Only one of these pictures – the representation of the evangelist Lukas – has been photographically preserved.  The codex from the grammar school library was placed in the Hanover Public Record Office, but was destroyed by fire in 1943.  The Hamelin church chronicle was written down by Johann von Pohle in 1384 on free pages in the gospel book.

Pilgrimage to “beautiful Mary” in Regensburg

The Chapel of the Virgin Mary in Regensburg became the focus of a pilgrimage in 1519 due to a reputed miracle. The pilgrims honoured a Mary figure standing on a pedestal in front of the chapel, as well as a painting presented on the altar inside.  The contemporary wooden carving shows the ardour of the reverence for miracles and the divine on the eve of the Reformation, which often turned into delusion and hysteria.

A Carmelite abbey in Hamelin?

In 1317, the city council sold half of the Werder to the Carmelite Order for “300 silver Bremer Marks”. They were not permitted to settle within the city walls. Nevertheless, they later succeeded in finding a homestead in Hamelin – but probably not in Kupferschmiedstraße, as erroneously assumed in the picture.  The members were “mendicants”. Strict asceticism and poverty marked life in the cloisters, in which each devoted themselves to prayer and worked alone in a cell.

The Beguines were a lay community of Christian women.  They lived a chaste life in household communities like a religious order.   The courtyards usually consisted of small living quarters and a chapel.   The Beguines devoted themselves to nursing and education.  They were persecuted as heretics by the Catholic Church for a time.  A document from 1343 contains the first references to the Hamelin Beguines and their courtyard.

In 1326, the Abbot of Fulda permitted the mendicant order of the Hermits of Augustine to establish a branch in Hamelin.  In the previous year, the Pope had granted a charter to the order. The monks bought a house in Neuer Markt. When it became apparent that a monastery was being founded, the diocese and city protested. There was a trial. In 1360, the premises were taken back by mandate. The monks were driven out.  The exact location of the premises is unknown.  Was the former St. Jodokus Chapel also located in the modern Alte Marktstraße?