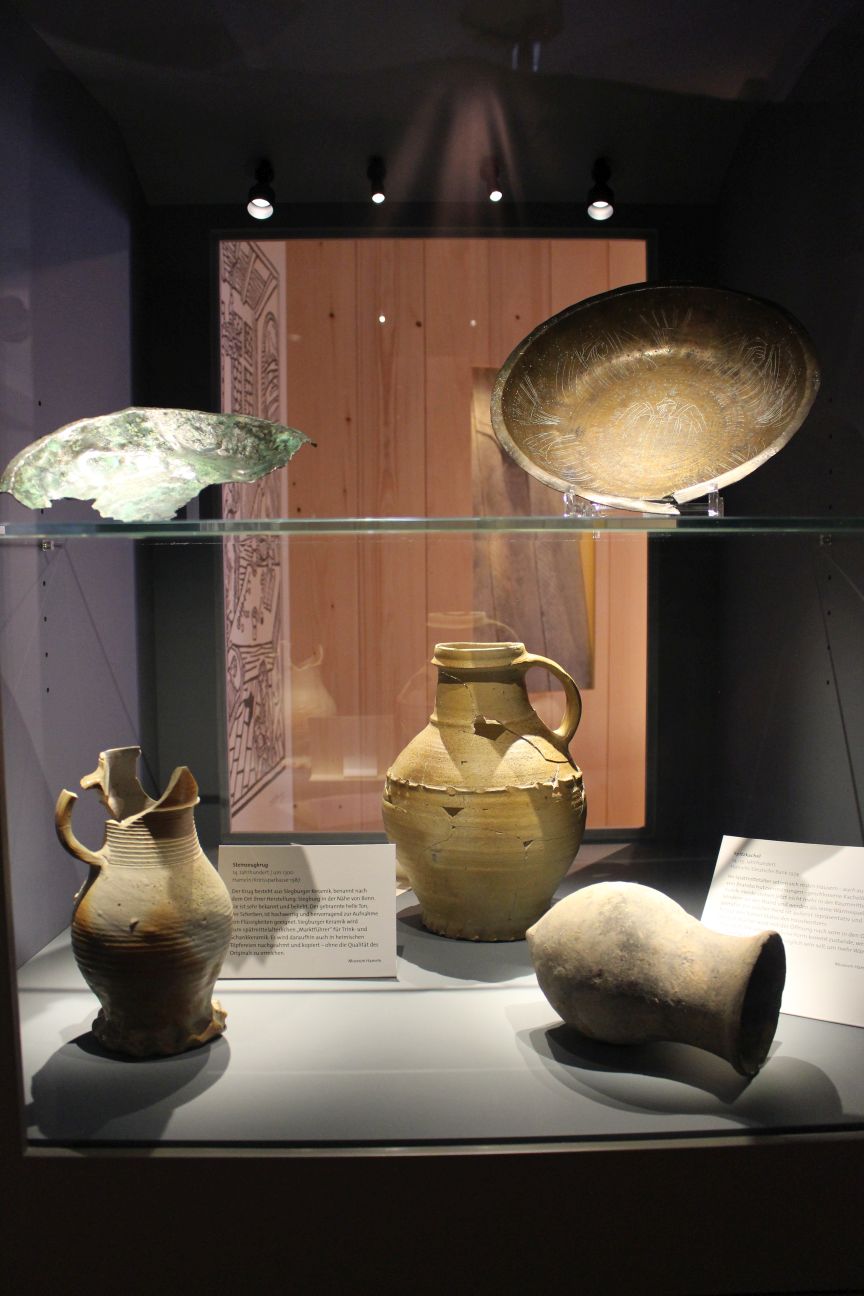 Objects of daily life in the Middle Ages, © Museum Hameln

Life in the Middle Ages

The bowl was found during the demolition of the so-called Eickhoff House in 1899 and donated to the museum.  The central decoration is an angel figure.  Similar bowls were endowed with motifs or text which referred to virtue or warned against vices.

The use of the bowl from Hamelin is unclear.   It may have been used in ecclesiastical affairs for ritual washing. It may also have been a so-called hand bowl: in a rich household, water was poured over the hands from a can after a meal and caught in such a bowl.

The jug is made of Siegburg ceramic, named after the place of manufacture:  Siegburg near Bonn.

It was very well-known and popular.  The fired light clay, made of fragments, was valuable and excellently suited to holding liquids. Siegburg ceramic became a “market leader” in the Late Middle Ages for drinking and bar ceramics. It was also imitated in domestic potteries – without achieving the quality of the original.

In the Late Middle Ages, closed tiled ovens were introduced in households – partly due to fire protection regulations.  Stoves no longer stood in the middle of the room, but at the wall and were used purely as a source of warmth. Such a stove was very representative and demonstrated the high social status of the house owner.

The pointed tile was placed at the front of the oven on opening it. The unusual shape exists because the surface needed to be as large as possible to give out more heat.

The more wealth someone possesses, the more their fear of losing it grows. A key is thereby a sign of an increasing need for security.  Theft is the most serious offence that can be committed and is correspondingly severely punished.  But keys are required, nevertheless.

Each key belongs to a lock, which usually, however, is not passed on together with the key.   Each lock is unique.  This complicated barb speaks of the ability of its smith.

This key may have been used to lock a chest or gate. Not only valuable clothing, but also money or important documents could be kept in a chest.  In an emergency, the whole chest could be transported.

Such a key was noticeable because of its size. It is dependent on production. Often keys were worn openly on clothing and were thus not only a tool, but also a status symbol.

This Gothic key with its flat rhombic grip, the flat barb and hoop incision invokes Gothic architecture.  It probably belonged to a padlock in a wealthy household.

Metal locks and keys were expensive.  Wooden bolts and locks were thus used into the Modern Age. 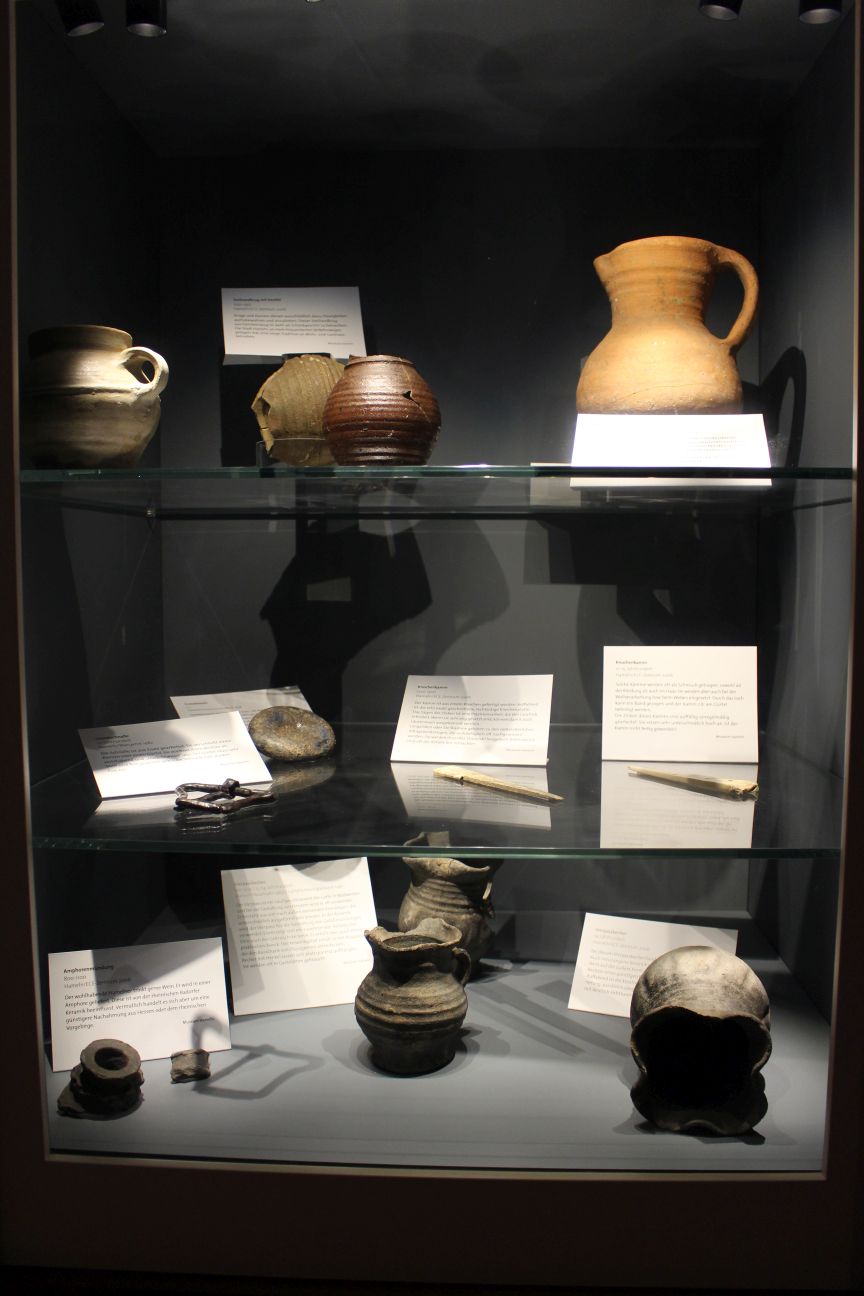 Objects of daily life in the Middle Ages, © Museum Hameln

Jars and jugs were used exclusively for storing and serving liquids. This steep-sided jar made of near-stoneware was probably bar crockery.

The city of Hamelin, located on highly frequented traffic routes, has a long tradition of inns and guesthouses.

Round jug with handle

The shape of the jug is unusual. The round base is striking.  Did it serve a special purpose, possibly in medicine?

Turning with the disc is only performed gradually. It is usual only to turn the neck of a container and shape the body by hand.  The connecting of both parts is not so easy.  Here the jug is somewhat lop-sided.

Bengerode bei Fredelsloh had important potteries in the Middle Ages.  The craftsmen of Bengerode produced not only for the regional sales market in the south of Lower Saxony, but also sold their containers in Scandinavia and eastern Central Europe.

Bengerode goods were extremely popular in Hamelin.  The containers were probably used as bar dishes.

Rubbing stones were made of glass.  They were used for smoothing. When rubbed they become warm and thus press down fibres.  Fabric, paper and leather were smoothed with it.  However, rubbing stones were also used to crush and rub materials.

The buckle is made of iron.  It closed round a strap or belt.  It shows that the owner was well-off and “fashion conscious”.  The belt must have been very wide and tight – the buckle could take being pulled quite strongly.

The comb has been made from a bone.  The very exactly cut, right-angled bone plate is noteworthy.  The sawing of the teeth was precision work requiring a lot of skill.  If they were placed very narrowly, nits could also be combed out with it.

Long tooth or steep combs were among the everyday tools in the Middle Ages, which has often been archaeologically proven.  They were produced in great quantities.  The raw material was often waste product from the slaughterhouse.

Such combs were often worn as jewellery, both on clothing and also in the hair. They were also used in wool production and weaving.  A band could be pulled through the hole and the comb could be fastened, for example, on one’s belt.

It is noticeable that the teeth of this comb were unevenly worked.  They are set at very different heights.  Is the comb not yet finished?

The wealthy Hamelin citizen liked to drink wine.  It was delivered in an amphora. This one was influenced by Badorf ceramic from the Rhineland. Presumably however, it is a cheap imitation from Hessen or the foothills of the Rhine.

The quatrefoil is a common ornament in the Gothic style.  It is often used in tracery and the design of windows. It consists of four circular arcs pointing outwards which can be variously shaped.  In ceramics, the quatrefoil is used in the design of container outlets.  A growing aesthetic sense is displayed through it, also in everyday ceramics.  It also fulfils a practical purpose: The ceramic container has four spouts, simplifying the serving of liquids.

Cups with handles can be hung up to save space.  They are often used in guesthouses.

This quatrefoil cup is misfired pottery.  Defective ceramic was also sold.  If someone did not place value on the outer form of a container, they may have become the proud owner of a cheap cup.

The creative sculptural design is noticeable with shoulder grooves, parallel lengthwise hollows and an arch foot with clearly visible finger wrinkles on the base.