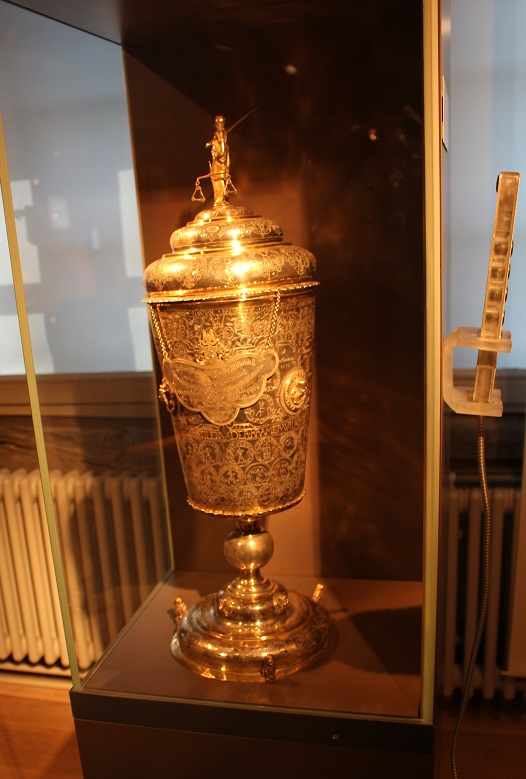 The Krameramtspokal (i.e. Welcome goblet of the Hamelin small traders’ association):  an important testimony to the city’s history

There is a multitude of inscriptions on the Krameramtspokal. Mostly it is personal names, the year and the house brands of the foreman, i.e. the head of the Krameramt. But the work on the trophy is also documented with inscriptions – and special events in the city’s history. The trophy is an outstanding testimony to the city’s history, the voice of which still speaks to us today.

The goblet was probably made in 1593, but it is not entirely clear. During this time, Hamelin was under the government of Duke Heinrich Julius. The city is very wealthy, the citizens like to show their wealth. The outbreak of the plague in 1598 does nothing to change that. The epidemic rages so badly that the Münsterkirchhof has to be expanded as the only burial site in the city. But just a few years later, the city had the Hochzeitshaus built as a visible sign of its wealth.

Hamelin experienced difficult times during the Thirty Years‘ War. The city spent a total of eight years under foreign rule, and it was besieged for six months. High contribution payments melt away the wealth of the citizens. When the Imperial troops left in 1633, the relief was great. A few years later, the Krameramt had the silver cup redesigned – or did it have a new one made? The turmoil and tribulations of the war are over, and the Hamelner Kramer want to show their joy!

In 1688 Hamelin received a new city constitution from the sovereign. It severely limits the political power of the trade associations. The Krameramt let the foot of the cup “improve” in the following year, ie re-manufacture with higher quality silver. It does not succumb to the pressure of the sovereign, but shows what strength and what importance it still has.

An inscription in the lid of the cup describes the difficulties of the Napoleonic period:

“Under the despotic and predatory rule of Hieronÿmus Napoleon the Corruptor in the years 1810, 1811, 1812 and 1813; this welcome of the Kramer office was received by the superiors. ”Although the inscription is wisely placed under the cover – who knows how times will change again. But it speaks from the pride of the Hamelner Kramer that saved their most precious property, the splendid silver welcome cup. 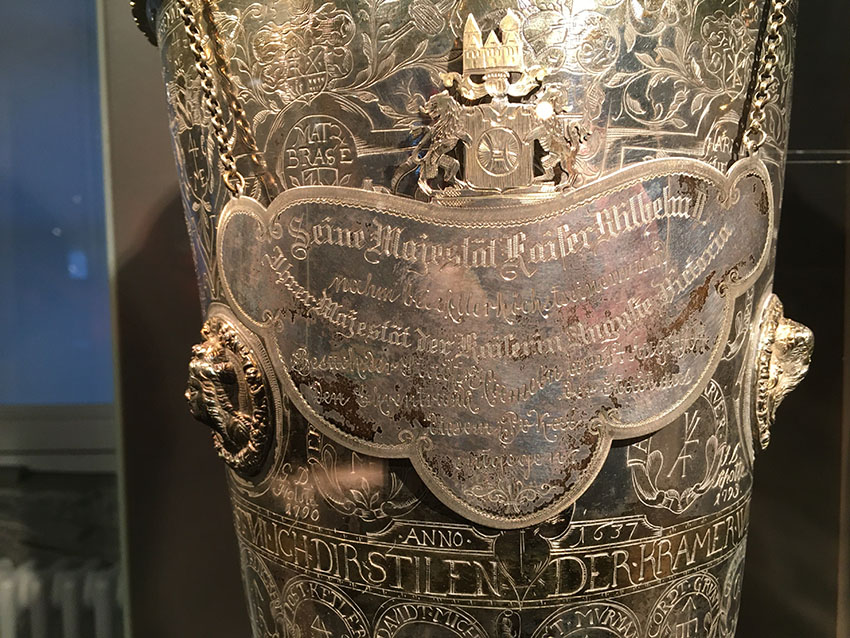 Even in the Middle Ages, the trade in Hameln was well organized: in the 14th century there were three different groups of traders: Höker, Kramer and Kaufmanns. Each group has a precisely defined scope of goods that can be traded with. The members of the Kaufamt are all wholesale merchants. The Kramer, on the other hand, trade in smaller quantities, which are sold by cubit, pound or jug ​​or in pieces. They have a shop with an extensive range, and many also regularly visit trade fairs and markets. As a Höker you can only operate a limited retail trade in everyday goods.

The Guild Letter of Hamelner Kramer from 1681 lists the goods with which they can trade: These include silver and gold, velvet and silk, wool and cotton, sugar, spices, jams, honey cake and syrup, tea, coffee, chocolate and cocoa. Sealing wax, parchment, as well as painting and dyeing supplies can also be purchased from Kramer. The range of course changes over the years. In the directory of office supplies from August 4, 1783 there are now e.g. also powder and lead, as well as „all sorts of woolen lining, such as it is and will be worn in the future.“

In the late 16th century, trade flourished in Hameln and the city experienced a real heyday. The guilds need to make their prosperity visible from the outside. The Krameramt therefore decided in 1592 that „every official brother had to give a thaler because the Krameramt would have made a welcome goblet.“ This silver cup is now used as a ritual drinking vessel for the guild. At the „sprake“, the office’s meeting, which takes place several times a year, he will e.g. handed out to new members. The apprentices are also allowed to take a sip of it when they are released.

With the new city constitution of 1688, the old guilds lose their political importance, but remain influential. That only changed with the freedom of trade, which was also introduced in the Kingdom of Hanover in the 19th century. The differences between the Kaufamt and Krameramt are becoming increasingly blurred. In 1832 the Royal Cabinet Ministry approved the proposed merger of the two offices.

Finally, on December 11, 1874, the Department of Merchants declared its cancellation at a meeting in the town hall. The office’s cash is divided among the remaining 30 members. The „Welcome“, „which has a silver value of 306 M, an art value of 1,500 M [ark]“, is given to the city of Hameln.

Each member, however, still has the right to use the trophy on loan for solemn family matters. 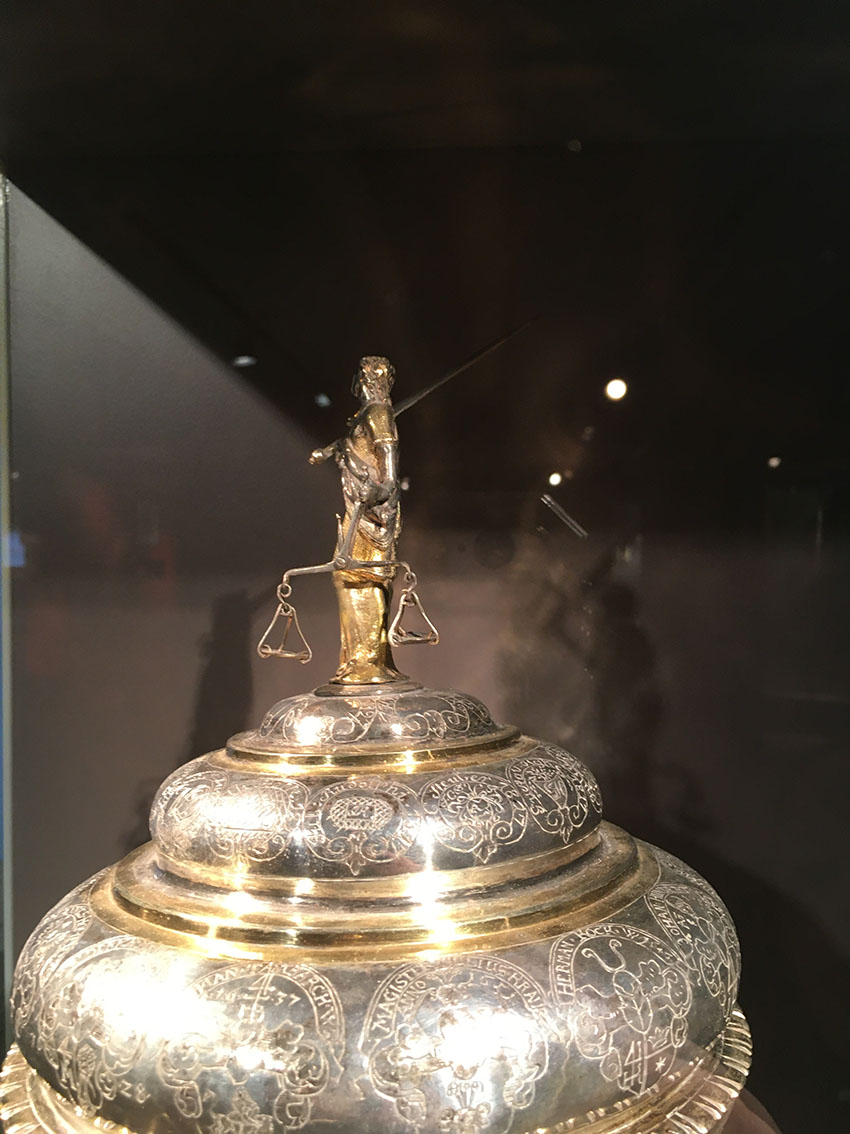 The Hamelin silversmiths and the Krameramtspokal

The Hamelin city book „Donat“ mentions a guild of goldsmiths as early as the middle of the 14th century. It also includes the silversmiths, which do not have their own association. The heyday of goldsmithing in Hamelin began in the late 17th century. There is now a huge demand for luxury items. The products of the Hamelin silversmiths are valued far beyond the city limits. Especially the works of the Hurlebusch family, which spawned several generations of masters, were sought after in the 18th century because of their high quality.

The silver goblet of the Krameramt was made long before the Hurlebusch era in Hameln. How this happens, however, is not clear. An old official book says that the Krameramt had a silver welcome cup made between 1592 and 1593. In addition to the inscription “You have to drink the goblet completely”, there is also the number „93“ engraved which may be added to 1593. The terms of office of the heads of the Krameramt are listed and there is also a year that can also be used as the year of manufacture. All around the trophy is: „I am called Kramer Wilkom, you put me in your hand, and drink the wine from me, I will quench your thirst“, above it the year 1637. Perhaps there are two goblets, an older one and given a younger one? Perhaps the goblet was also made in 1593 and redesigned in 1637.

It is also unclear which master forges the cup – there is no corresponding sign. There are only two indistinct stamps on the foot, which according to the inscription from 1689 the gentlemen of the Krameramt “have 48 Loth silver improved”. One of them shows the Hamelin coat of arms, the second the letter „K“ in the cross oval. This could be the master’s mark of Johann Krecke, who came to Hameln as a gold worker in 1636.

Various Hamelin silversmiths later worked on the goblet. However, only a second silversmith can be unequivocally identified by his maker’s mark: Anton Richard Hoyer. The son of a member of the Chamber of Commerce in Hameln became a master in Hameln in 1807. He made the first of the two inscriptions on the inside of the cover, with which the office was pleased in 1814 to have saved the goblet safely through the difficult times of the French occupation. 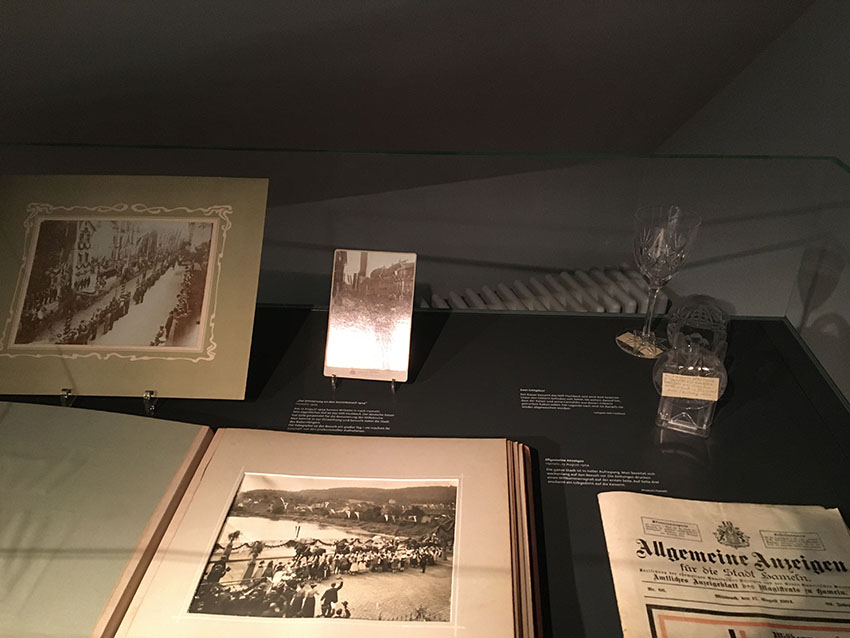 Already in the early morning of August 17, 1904, a Wednesday, there is a lot going on in Hamelin’s alleys. A lineup of the Hanover police block the main streets. You will only be allowed through with a pass. A big event is pending: The visit of Kaiser Wilhelm II. He travels to Fischbeck for the inauguration of the renovated church and stops on the way there in the Pied Piper town. Initially planned for August 10, it only became known three days in advance that the emperor had not returned from a trip to the north in time. But the Hamelin people are flexible. The fir green edition for decorating the streets and houses is discontinued and the entire festival program is postponed for a week.

Punctually at 11 a.m., the imperial court train arrives at the Hamelin train station in wonderful summer weather. Wilhelm II is accompanied by his wife Auguste Victoria, Prince Eitel Friedrich and Oskar as well as Princess Viktoria Luise and a 14-member retinue. The Hohenzollern take a seat on the festively decorated forecourt in an open four-in-hand. Under the ringing of bells and hurray calls they drive through the streets lined with trellises to the town hall. There the top representatives of the authorities, honorary virgins and invited guests are waiting for the majesty’s arrival. As a greeting, Mayor Justus Meyer speaks of the special honor that the Emperor Hamelin has shown with his visit. This is followed by a pledge of unwavering fidelity and a request that the emperor „accept this cup of German wine graciously as a sign of a gracious acceptance of this pledge […]“. Meyer then hands the Emperor the welcome of the Hamelin Chamber of Commerce in the carriage; it is filled with Eitelsbacher Karthäuser-Hofberg. The Emperor thanks Meyer, empties the mug and “after a 12-minute stay the majesties and their entourage continue their journey through the city. At around 11:30 a.m. they continue to Fischbeck.“

The City Council also wants to make the unique opportunity of this short visit to the Emperor an economic success for Hamelin. In order to keep the numerous foreign guests in the city for as long as possible, there is a rich festival program that lasts until late in the evening. „Several bars to refresh the public“ have been set up, 16 special trains are running. Several concerts take place until 11 p.m. The fairgrounds are lit by lanterns and „various electric arc lamps and spotlights.“ The high point of the celebrations is the large fireworks display, which is burned down at quarter past nine by Mr. Ahrens. The Deister and Weser newspaper recommended to its readers days in advance to secure suitable observation spots in good time. In fact, so many visitors flock to the city that “crates, boards and beer barrels serve as seating on Dreyer’s mountain garden.”

The Krameramt goblet, which has received new honors, will be displayed in the shop window of the jeweler Schmidt in Osterstrasse after the festival. He receives his last engraving, which heralds the visit of the emperor and the drink of honor.