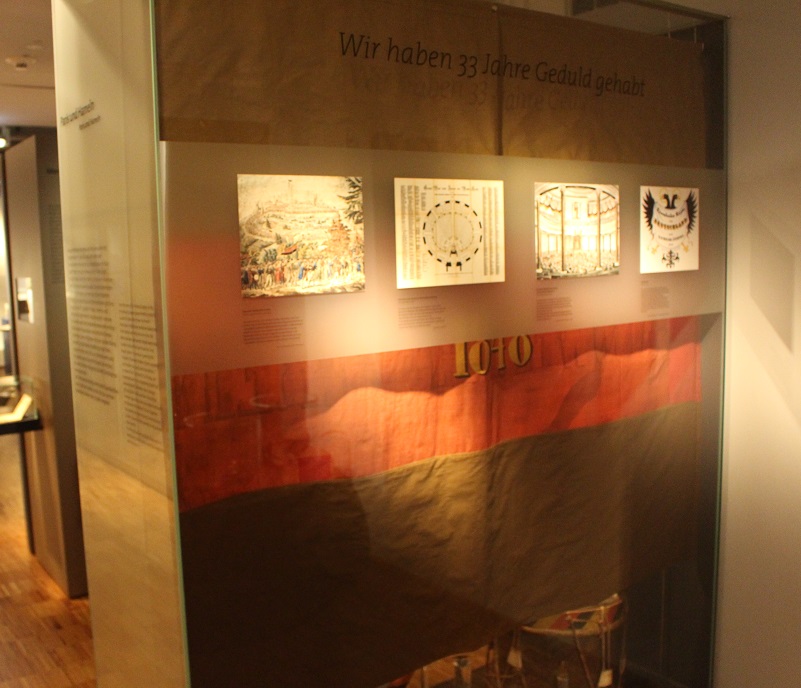 From the time of the Vienna Congress in 1815, the various European governments try hard to squash the ideas born from the French Revolution. In 1848 a new revolution shakes Paris. Street battles and riots ensue in cities like Berlin, Hanover and Hameln. People want more freedom and political participation. Ernst August gives in to pressure, granting the Kingdom of Hanover freedom of press, assembly and freedom for guilds and associations. In Hameln the Craftsmen’s Guild plays an important part in the organising of political demonstrations. Members are in danger of losing their social positions. Dissatisfied members found their own association and soon this becomes the Worker’s Union. Together they achieve the formation of a revolutionary Citizen’s Council. Unfortunately it only existed a few months.

The King of Hanover gradually takes back his concessions. Seventy years would pass before the next revolution.

In 1832, between 20,000 and 30,000 people gathered at Hambach Castle demanding more economic freedom and greater political co-determination. They additionally called in passionate speeches for the realisation of German unification. Freedom of the press and association was more radically suppressed in the following period than before. Many speakers were arrested, others fled abroad.

The plan shows the seating places of the individual, named members of the National Assembly. Those who could not attend the debates could at least imagine where their Member of Parliament was sitting.

In the gap between 89 and 90, Carl Nicol from Hanover is sitting on the front row without a number. He also represented Hamelin. His place was the third from right.

Session of the National Assembly at the Paulskirche in Frankfurt

The National Assembly met for the first time on 18th May 1848. Parliamentarians elected by the middle classes from all German states were represented here. They wanted to design a unified, democratic constitution for the whole of the German Empire.

In April 1849, they offered the German imperial crown to the Prussian King – but he refused. The failure of the project was thus sealed.

The plain railway card carries a clear, political message. The black imperial eagle bears red twine and a golden halo. The word Germany is also printed in the colours of the Revolution: black, red and gold.

Such a card was perfectly suited for this statement, since there was not one railway company, but many. The railways connected the German states, but they each pursued their own economic interests, which ended at the borders. They were thus symbolic of the ununified Germany. 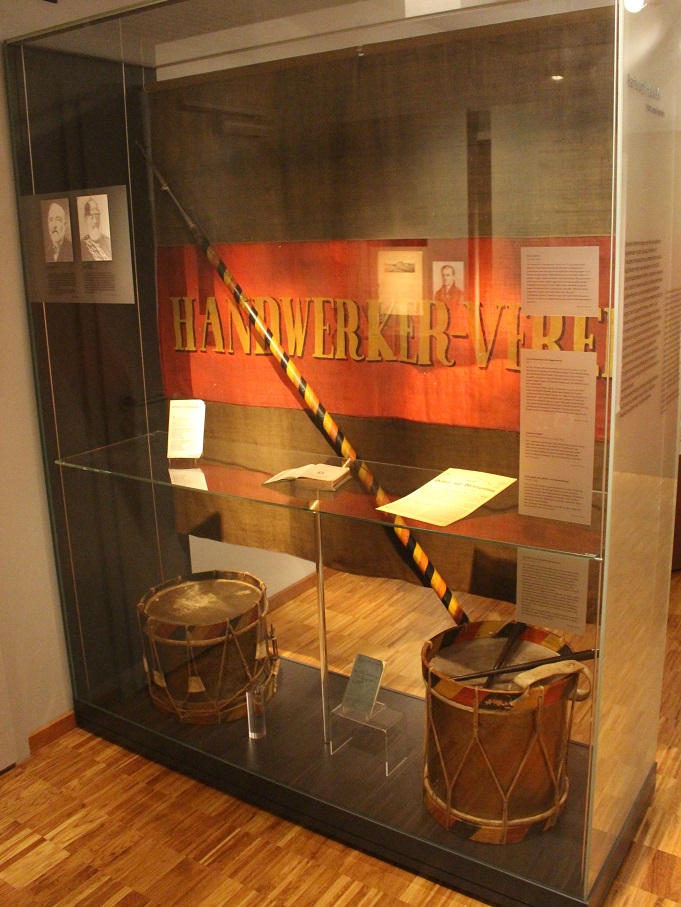 C.W. Lohmann belonged to the successful industrial middle class of Hamelin. His dyeworks was located in Stubenstraße. In 1853, he established a mechanical spinning mill. In 1865, he was the founder of the “Hamelin Spinning, Weaving and Dye Works” in Süntelstraße, which was later sold to the Besmer carpet factory. Lohmann established a textile retail business which continued into the 21st century.

Lohmann was a management board member of the revolutionary first Hamelin Gymnastics Club. In 1880, he was the founder of the “Young Traders’ Gymnastics Club”, together with others.

The headmaster of the citizen school, Moritz Theilkuhl, was a distinguished resident of the city.  In 1848, he was elected as the President of the People’s Association. The association was intended to mobilise the middle classes – but not women, who remained excluded from political participation for a long time yet. Theilkuhl was also the editor of the “New Hamelin Gazette”, founded in the year of the Revolution, which promoted the ideas of the new era. In 1863, Theilkuhl gained citizenship, and a year later he was elected provost.

The Hamelin Craftworkers’ Association was founded in 1844. Foremen and other business people formed an association to discuss the economic conditions of their work. Soon they also took an interest in social questions and thus developed into a political association. In 1848, the Craftworkers’ Association first organised protests in the city. It thereby breached sovereign laws, but this had no obvious negative consequences.

The association was disbanded in 1855.

The widow Mrs Suckert left the flag to the Hamelin Museum in 1901. Her husband was head of the Craftworkers’ Association in 1848.

On the eighteenth of the victor’s moon

On 18th October 1817, 500 students assembled at the Wartburg. They were protesting about the suppression of democratic movements. The date was not chosen by coincidence: Martin Luther was reputed to have nailed his Theses to the church door on this day, and the Battle of the Nations also took place in Leipzig in October.

An important demand of the students was for new German unification. This idea was expressed in the lyrics by Ernst Moritz Arndt, “What is the German Fatherland?”. The song developed into a kind of National Anthem for a kingdom which did not even exist. Arndt demanded: “Germany should be unified!” He was in favour of the so-called greater German solution: Prussia and the German states should be unified with Austria in one kingdom.

The song book contains the song “Deutschland, Deutschland über Alles, über Alles in der Welt.” A.H. Hoffmann von Fallersleben wrote the text of the song in 1841, which later became the German National Anthem. He emphasised the German nation, which was defined by language and culture.

The newly established militia was open to all men – not only Hamelin citizens. It adopted the symbol of the German democracy movement: Black-red-gold. This colour sequence was first used at the Wartburg festival in 1817. The students invoked the Lützowsche Freikorps, a volunteer unit which fought against Napoléon. Their uniform was black with red lapels and golden buttons.

The Revolution of 1848 was a European phenomenon. There were uprisings first in Paris, then in Vienna. There were violent clashes in Berlin in March 1848. A militia was formed on 22nd April 1848 in Hamelin. It was placed under municipal authority. It was intended to oppose radical developments by the concentration of civilian forces.

The city was spared from dangerous street battles. The fears remained ungrounded. Mere commotions called the militia to action. 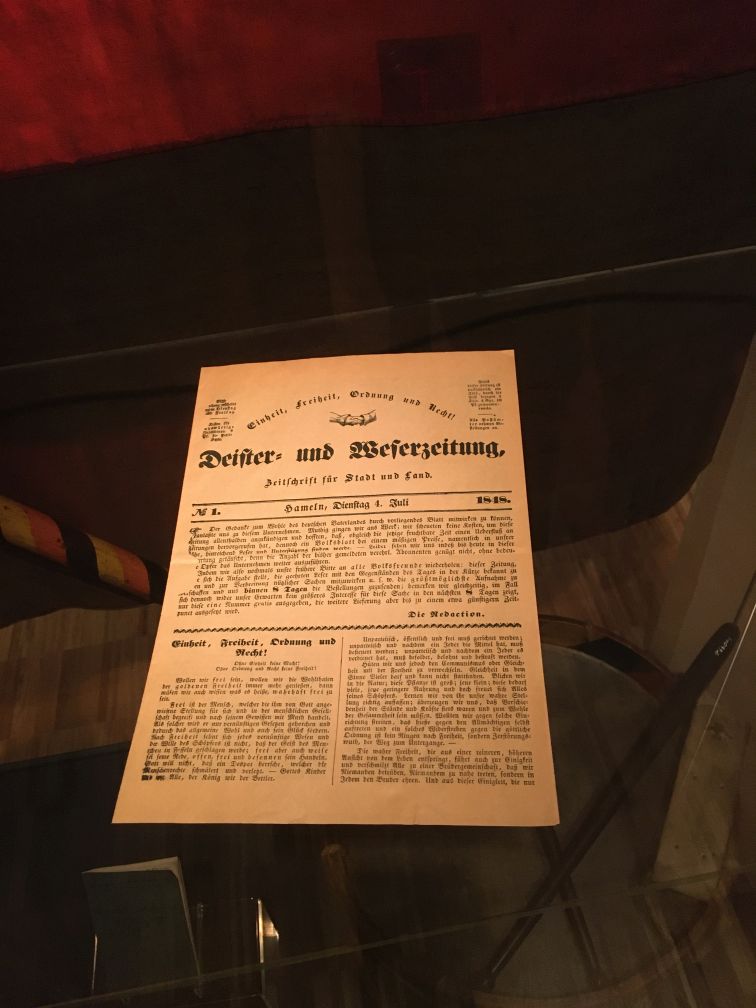 An important demand of the Revolution was the removal of press censorship. This was granted for a few years. Two new newspapers could thus be established in Hamelin in the summer of 1848: the “New Hamelin Gazette” and “Deister and Weser” newspaper. Both subscribed to the goals of the 1848 Revolution.

However, the “Gazette” was closed down at the end of 1851. The “Dewezet” is still in circulation today.